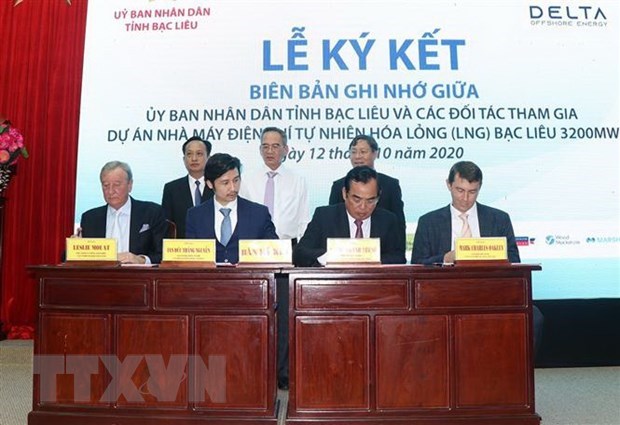 At the signing ceremony (Photo: VNA)

Bac Lieu (VNA) – A memorandum of understanding ( MoU ) on the building of a 3,200MW liquefied natural gas-fired power plant in the Mekong Delta province of Bac Lieu was signed between representatives of the provincial People’s Committee and Singapore’s Delta Offshore Energy Pte.Ltd (DOE), at a ceremony in the locality on October 12.

According to the MOU, the signatories are committed to coordinate with central and local management agencies in completing the remaining tasks in developing the projects in 2020 on schedule.

Official negotiations on a 25-year power purchase agreement between DOE and the Electricity of Vietnam ( EVN ) will start immediately after the event. The agreement is expected to be inked by the end of this year.

The technical design is scheduled to be completed by the end of 2020, enabling the project’s construction to begin in 2021. The first turbine of the plant is hoped to become commercially operational in 2024.

The project, worth approximately 4 billion USD, is the biggest foreign direct investment (FDI) projects in the Mekong Delta region.  It is expected to create thousands of jobs and contribute more than 3 trillion VND (129.6 million USD) per year to the State budget./.

As a unique cultural destination in the Mekong Delta province of Bac Lieu, Ghositaram Pagoda is considered to be a museum of fine arts showcasing the talent of Khmer artists.

Approved by the Prime Minister in 2007, the area covers 418.91 hectares in Hiep Thanh commune of Bac Lieu city.

The area is expected to facilitate the research and application of high technology into the shrimp industry, including production of shrimp seeds and shrimp feed of the province as well as in the Ca Mau peninsular, the Mekong Delta and the whole country.

Bac Lieu has approved a project to make Bac Lieu a centre of the country’s shrimp industry with major targets of turning the province a leading locality in high technology research and application for brackish water shrimp farming, focusing on shrimp farming and processing, and acting as a connecting point of the industry in the whole region.

Bac Lieu has been a major shrimp hub of the country with a yearly output of 32-35 billion shrimp fry.

Currently, Bac Lieu has more than 136,000 hectares of shrimp farm, of which 2,200 hectares are high-tech farms.

The locality is home to four businesses certified as high-tech agricultural firms, along with seven units meeting international standards in aquatic farming.

Vice Chairwoman of the provincial People’s Committee Cao Xuan Thu Van said that the province has invested in creating new tourism products, and increasing the quality and bringing into full play key products, and in completing infrastructure at main tourist sites.

In addition, the locality has coordinated with investors in developing tourism in coastal areas, speeding up construction on eco-tourism and entertainment tourist sites, and reviewing and re-assessing natural resources for tourism development, so as to build strategies in a concerted and oriented manner to avoid overlapping between localities in the Mekong Delta.

According to Van, local authorities are developing typical products of the trade villages such as salt production, fishing net knitting, seafood processing, and vegetable cultivation, while encouraging locals to take part in tourism, towards building community-based tourism models.

The province has also been investing in restoring and promoting the values of historical and cultural relic sites and ancient architectures, she added.

In 2021, Bac Lieu strives to welcome 3.2 million tourists and earn about 3.2 trillion VND (139.5 million USD) from tourism services, up 40 percent and 65 percent year-on-year respectively. It has also set a target of having 1.5 million visitors staying overnight, an increase of 53 percent compared to the figure of 2020.

The My Thuan Project Management Unit has just proposed the Ministry of Transport to appraise the pre-feasibility study of the Can Tho-Ca Mau Expressway project.

Accordingly, the 156km expressway will begin at the Cha Va intersection in Binh Minh town, Vinh Long province, about 4.5km downstream from Can Tho Bridge, and will end at the intersection of Tac Van route, bypassing National Highway 1 through Ca Mau city. The route will travel through six localities in the Mekong Delta including Vinh Long, Can Tho, Hau Giang, Soc Trang, Bac Lieu, and Ca Mau, with Soc Trang and Bac Lieu accommodating the longest road stretches of 64.56km and 51.89km.

The construction will be implemented in two phases. The first phase will include a two-lane road surface of 13.75m in width, accommodating travelling speeds of up to 80kmh, as well as a 5m-wide local road.

Once reaching completion, the route will be upgraded to four lanes with 24.75m in total width. Particularly, the 30.9km section crossing with the Chau Doc-Can Tho-Soc Trang Expressway will be built with a scale of six lanes, 32.25m wide with a designed speed of 100kmh.

According to the My Thuan Project Management Unit, the Can Tho-Ca Mau Expressway project is divided into two component projects. The first one from Can Tho to Bac Lieu will use approximately VND37.611 trillion ($1,629 billion) of public capital from the medium-term public investment plan for 2021-2025.

The second one will go from Bac Lieu to Ca Mau under the management of Ca Mau People’s Committee. It will have an investment capital of around VND64 trillion ($2,774 billion) and will be implemented under the public-private partnership (PPP) format as directed by the prime minister in August 2020.

The Can Tho-Ca Mau Expressway will provide an axis for the Mekong Delta, connecting the region’s economic centre with the southernmost tip of the country and completing the regional road network and reducing the load on National Highway 1, serving as a gateway to major urban centres.

This is the biggest foreign direct investment project in the Mekong Delta so far, scheduled to become fully operational by the end of 2027.

The complex project will comprise of a 3,200-megawatt combined-cycle power plant which will cover 40 hectares of land in Hoa Binh district, a floating station to receive and store 150,000-174,000 cubic meters of LNG, a gas recycling station, and a 35km high pressure gas pipeline.

The investor plans to complete the preparations for the investment by the end of 2020. At the end of 2023, it will build a station to storage, recycle, and bring gas ashore as well as operate the first-phase gas turbine capacity of 750MW.

Delta Offshore Energy expects to put the complex into full operation before December 2027.

The selling electricity prices will be determined through the negotiations between DOE Singapore and Vietnam Electricity (EVN), around 7 US cent/kWh as estimated.

Speaking at the decision-granting ceremony, Chairman of the Bac Lieu People’s Committee Duong Thanh Trung described the LNG-fueled power plant as a key project significantly driving up the local economy.

The project, which is the biggest foreign-invested project in the Mekong Delta so far, is expected to create thousands of jobs.

In September 2019, Houston-based Liquefied Natural Gas Limited (LNG Limited) Delta DeltaOE signed a deal to develop the project which will use LNG from a Louisiana-based project.

LNG Limited will deliver two million tons of LNG per year from its Magnolia project to Delta OE for a 20-year term and possible extension while DeltaOE deliver gas to the power plant, generate electricity, and sell its output to the province pursuant to a power purchase agreement (PPA).