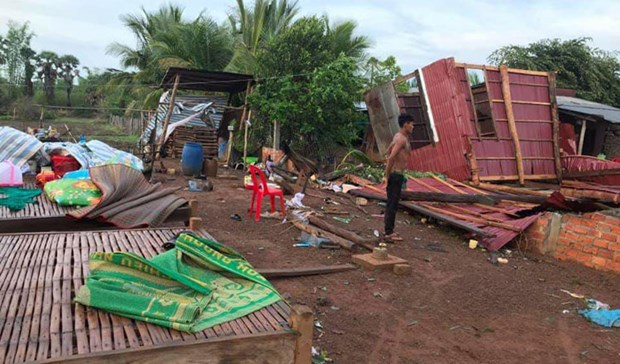 According to Kratie province’s Snuol district governor Sarm Nal, at least 200 houses in the district were either partly or completely destroyed due to strong winds and heavy rain.

However, no one got injured or died in the incident, he said, adding that locals in affected areas have moved to a safe site.

Meanwhile, some 73 houses and the Mongkul Market in Poipet city were also destroyed.

Another 34 houses in Chantrea and Kampong Ro districts in Svay Rieng province either collapsed or were partly damaged with no human or animal casualties. At the same time, dozens of houses in Tboung Khmum, Kadal and Oddar Meanchey were also destroyed.

The Ministry of Water Resources and Meteorology warned the public, especially people in lowland provinces , to remain vigilant for strong winds and rain until May 11./.

VNA
On the afternoon of April 4, in Hanoi, Vietnam Electricity (EVN) held an exchange with economic and energy experts in Vietnam about the operation of the national power system in the context that renewable energy sources boom, making it difficult for the process of operating, transmitting, and regulating electrical loads.

Meanwhile, the demand for electrical loads this year is forecast to remain as low as last year due to the impacts of the Covid-19 pandemic. Last year, the load growth was only over 3 percent, much lower than the plan. In the first four months of this year, the load growth was only 5-7 percent, much lower than the same period of previous years. Mr. Nguyen Duc Ninh admitted that this situation makes the operation of the national power grid more difficult this year if the output of renewable energy is not controlled and reduced.

“To meet the maximum capacity for the renewable energy power system, currently, during operating hours at noon, especially from around 10 a.m. to 3 p.m., we are operating the system by halting most of the hydroelectric plants in the Central and Southern regions where there are many renewable energy projects,” said Mr. Ninh.

However, according to the Director of the National Load Dispatch Center, the closure of hydropower plants is not simple because it must comply with the provisions of 11 inter-reservoir operation processes approved by the Prime Minister, including regulations on minimum generation capacity and minimum discharge flow, to ensure sufficient water supply for the downstream regions in the dry season.

Therefore, to remove difficulties for hydropower plants, EVN plans to cut about 1.7 billion kWh of wind and solar power this year. From the beginning of the year to now, the output of renewable energy that must the cut is about 450 million kWh, accounting for about 7-9 percent of the output of renewable energy, mainly solar power. Mr. Nguyen Duc Ninh said that this reduction is necessary. 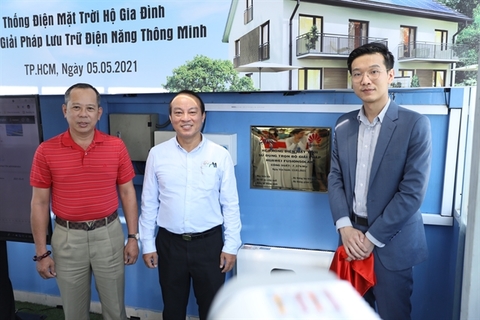 The system was installed on the rooftop of Redsun-ITI Corporation in HCM City’s District 5.

The rooftop solar power system came into operation in Viet Nam in March, marking a new achievement in using technology to make full use of renewable energy, helping reduce emissions, protect the environment, as well as save electricity costs for users.

Diep Bao Canh, General Director of Redsun-ITI Corporation, said: “After a month of operation, the 7.37kWp system has provided 995kWh, reducing 824 kilos of CO2. Based on the above data, it can be seen that within 4-5 years, customers will be paid back when investing in this roof voltage system.”

Dao Du Duong, the Chief Representative of the Viet Nam Clean Energy Association in HCM City, said solar power in the future will continue to develop. However, the market still depends on State policies to set a future development orientation. Therefore, it is advisable to focus on projects that are households using electricity, providing reasonable investment advice, combining the development of integrated storage battery projects so households can use electricity even when there is no light.

Huawei entered the solar power market in Viet Nam in 2018 and has become one of the leading equipment suppliers in all sectors, including solar farms, rooftop solar power, commercial and household industry.

The PAN Group attributed the growth in consolidated net revenue mainly to shrimp exports (up 36 per cent), seed and agricultural products (up 11 per cent), confectionery (up 63 per cent), and coffee (up 41 per cent). In the cashew segment, the group promotes the production and business of products and brands adding value, reducing the proportion of raw cashew materials of high revenue and low margin.

Regarding profit, the main contributors to consolidated profit growth were seed and agricultural products (up 111 per cent), nuts (up 195 per cent), and confectionery (up nearly six times), traditional fish sauce products (up 32 per cent). The coffee segment reduced losses against the same period in 2020, reaching the breakeven point.

In the first quarter of 2021, global supply chain disruptions continued and affected global economic performance, especially in transportation and logistics. The global shortage of empty containers increases transportation costs which is the main part of the input costs in most businesses, especially import-export enterprises.

Due to the sharp increase in logistics costs and input materials in the first quarter, although The PAN Group’s revenue from shrimp exports grew 36 per cent, its after-tax profit decreased by 23 per cent.

In Vietnam, the third outbreak of the pandemic coinciding with the Lunar New Year also leads to a decline in demand for travel and goods consumption. Many agricultural products cannot be sold locally in some areas implementing social distancing measures. The farming activities of local people and the business of enterprises in these areas face many difficulties. In that context, The PAN Group and all member companies have made efforts to overcome those challenges and achieved remarkable business results.

The group’s total consolidated assets were nearly VND12 trillion ($521.74 million), which remained nearly unchanged compared to the beginning of this period. The solvency ratios and the debt-to-equity ratio in the first quarter of 2021 was approximately equal to the end of 2020.

In the following quarters, the group continued to promote its core products and business activities, focusing on cost reduction. In addition, the group will accelerate the acquisition of Bibica shares from Lotte to implement the plan to increase its ownership to 100 per cent and at the same time continuing to increase its ownership in Vietnam Fumigation JSC to over 50 per cent to complete its value chains in the agricultural sector.