Why is protecting patient information important

HCMC – The Health Ministry has confirmed seven fresh Covid-19 patients, including two imported cases quarantined in Kien Giang Province and five locally-infected ones in Hai Duong Province, sending Vietnam’s caseload to 2,482 as of this evening, March 3.

The two imported cases are local residents of HCMC, both aged 23. The two women entered the Ha Tien international border gate in Kien Giang on February 28 and were quarantined upon their arrival. They are under treatment at the Ha Tien City Medical Center in this Mekong Delta province.

The five cases in Hai Duong, which is now the country’s biggest coronavirus hotspot, were linked to previously confirmed Covid-19 patients and had been placed in quarantine before. They are being treated at Covid-19 field hospitals in the northern province.

Up to now, the country has reported 1,566 locally-transmitted cases, with 873 recorded since January 27.

Data from the ministry showed that 1,898 coronavirus patients in the country have fully recovered, while fatalities stayed at 35. 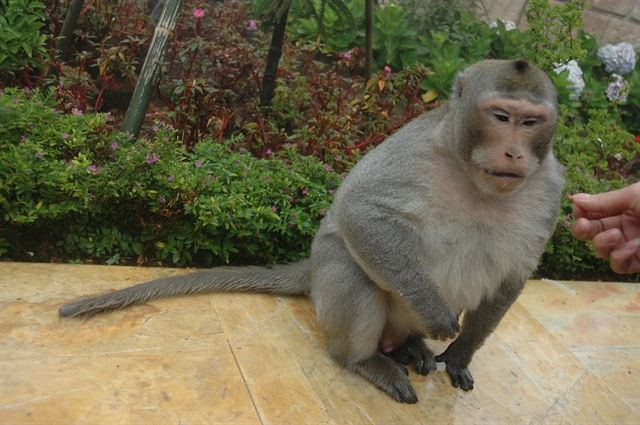 A monkey is given food by a visitor at a destination in Đà Nẵng. Sơn Trà District in Đà Nẵng has launched a conservation project on the protection of monkey and primates in the Sơn Trà Nature Reserve. — Photo courtesy of Trần Hữu Vỹ

ĐÀ NẴNG — Authorities of Sơn Trà District, in co-operation with the Centre of Biodiversity Conservation and GreenViet, have started researching the protection of the rhesus macaque monkey to drive troupes of monkeys back to the Sơn Trà Nature Reserve in the central city of Đà Nẵng.

Director of GreenViet, Trần Hữu Vỹ, said the research, which began last December, has been tracking the habitat and population of the monkeys as well as food chains to limit risks of conflict with human activities.

He said the research was urgent as many flocks of monkey had left their habitat in the primary forest to seek food from tourists and offerings at temples and pagodas at the foot of Sơn Trà mountain recently. Monkeys had conflicts with people when local residents and visitors tried to feed them.

Monkeys even broke into kitchens and fruit farms in the reserve, raising risks of transmitting viruses between the primates and people.

Despite serious warnings to not feed monkeys in the reserve, some local residents and tourists have given monkeys fruit, snacks and bread in the reserve.

Local rangers said they believed a group of 30 monkeys that used to gather by the Linh Ứng Pagoda to seek food from visitors returned to their natural habitat during COVID-19 social distancing orders between April and July.

However, the monkeys reappeared at some destinations to get food from tourists during the Tết (Lunar New Year) holidays. 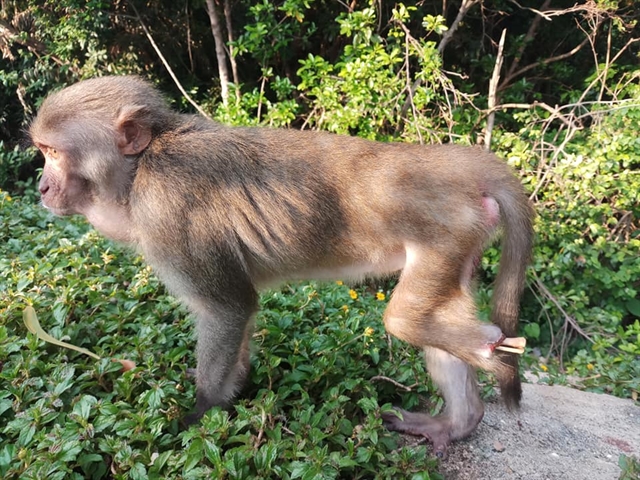 A monkey that has suffered a cut. Many monkeys have been injured or killed in conflicts with human activities in the Sơn Trà Nature reserve in Đà Nẵng over past years. — Photo courtesy of Nguyễn Công Hưng

Vỹ, a biodiversity conservationist, said it was important to stop feeding monkeys at tourism sites and long-term research should be built-in with the conservation and protection of the monkeys.

Research by a group of conservationists from GreenViet and Đà Nẵng University’s Science and Education College found there were about 50 herds of rhesus macaques with more than 500 individuals living in the reserve.

Biologists also warned that monkeys living in the reserve could break into resorts, causing trouble for tourists and management if local authorities do not have any effective solutions for the conservation and protection of the primates.

According to Sơn Trà-Ngũ Hành Sơn forest protection sub-department, some traffic accidents occurred in the area in recent years when cars and motorbikes hit monkeys crossing the road.

Last year, a baby monkey was grabbed by a local man at Linh Ứng Pagoda, while two other monkeys were killed by household dogs at farms in the reserve. 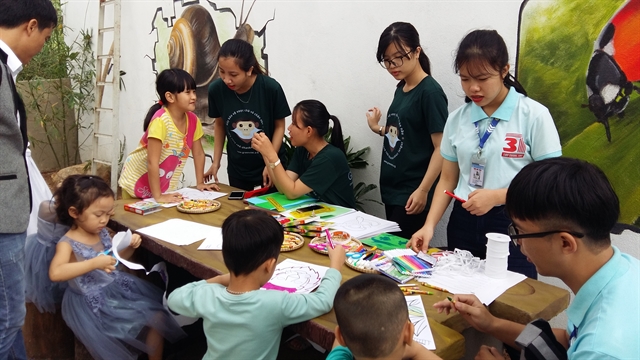 Six monkeys were killed by motorcyclists in 2015-17, and two cases of illegal hunting were uncovered in the area, with three red-shanked douc langurs killed for money.

The rhesus macaque is listed as Least Concern in the International Union for Conservation of Nature (IUCN)’s red list of threatened species.

With export turnover of $2.04 billion, the US surpassed China to become the largest consumer of Vietnamese agricultural products in the first two months of 2021.

Notably, with export turnover of about $2.04 billion, an increase of 57.3% over the same period and accounting for more than 33% of market share, the US became the largest customer of Vietnamese agricultural products during this time.

Following the US was China, with export revenue of $1.88 billion, up 57.9% over the same period last year and accounting for 30.53% market share.

In the coming time, the Ministry of Agriculture and Rural Development will focus on trade promotion activities. Regarding export markets, it will focus on issues related to market regulations and technical barriers in free trade areas (FTAs) consistent with the development of the Covid-19 epidemic. The Ministry will also strive to increase exports of dragon fruit and passion fruit.

In the domestic market, the Ministry will continue to monitor, collect and summarize information and data on prices, production and supply of agricultural products in the country, especially in Covid-hit provinces, and will implement the campaign calling for Vietnamese people to use Vietnamese goods in the 2021-2025 period. 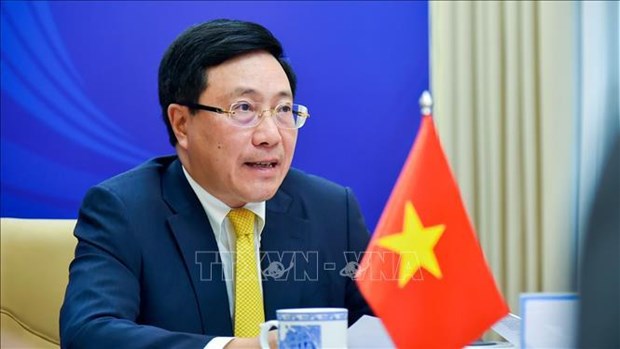 Deputy Prime Minister and Minister of Foreign Affairs Pham Binh Minh (Photo: VNA)
Hanoi (VNA) – Deputy Prime Minister and Foreign Minister Pham Binh Minh on March 2 led a Vietnam delegation to attend a virtual Informal ASEAN Ministerial Meeting, during which he affirmed Vietnam, as an active and responsible member of the ASEAN Community, commits to working with other member states of the bloc in fighting the COVID-19 pandemic.

Vietnam will back and help the ASEAN Chair in 2021 to fulfill its tasks and speed up the building of the Community, he stated, stressing that boosting relations with partners, and maintaining dialogues and cooperation bear important significance for the building process.

Deputy PM Minh noted that escalating violence and tensions, which have caused human losses in recent days in Myanmar, have affected peace and stability in not only Myanmar but also the whole region.

He called on parties involved to restrain and avoid all violent activities, ensure safety for people, and organise peace dialogues to soon bring the situation back to normal.

The Vietnamese representative recommended that ASEAN coordinate closely, promote its role, effectively use existing cooperation mechanisms and tools, including coordinating with global organisations and mechanisms such as the United Nations, to help Myanmar soon stabilise its situation, for the interests of its people and nation, and for peace and stability in the region and for solidarity and prestige of ASEAN.

They agreed to press on with efforts to build the ASEAN Community, respond to the COVID-19, and effectively carry out the post-pandemic recovery plan, including early realizing the ASEAN travel corridor initiative, using the COVID-19 ASEAN Response Fund to purchase vaccines for citizens, and putting the ASEAN Regional Reserve of Medical Supplies into operation.

ASEAN member states reached a consensus on expanding and deepening relations with partners so as to promote multilateralism and collective response to common challenges. They stressed the need for ASEAN to maintain solidarity and stance, and be ready to play its role in addressing common challenges in the regional and international situations.

Delegates also shared their concerns and viewpoints over recent developments in Myanmar, as well as ASEAN’s role in this issue.

The MoH confirmed two more cases on December 29, together with two other cases detected separately on December 26 and 28 respectively.

Of the four confirmed cases, two lives in Ho Chi Minh City, one in Vinh Long province and one in Dong Thap province, all in southern Vietnam.

The remaining two persons of the group 6 tested negative for the virus.

Hundreds of people who had contacts with the four patients have been quarantined for medical surveillance. Some of them tested negative while others are awaiting test results from authorized health agencies.

Medical workers have cordoned off and disinfected the homes of these patients as well as adjacent areas to prevent the spread of the virus to the wider community.

As these patients had contacts with people from various localities, authorities are speeding up tracing and quarantine in an effort to keep the virus at bay.

The same day, the MoH also announced a Vietnamese returnee from the United States has been infected with the virus.

The woman flew from the US and transited in Singapore before landing at Ho Chi Minh City’s Tan Son Nhat Airport on December 27.

She tested positive the following, and was transferred to HCM City-based Cu Chi field Hospital for monitoring and treatment.

As of 18.00hrs Vietnam had recorded a total of 1,454 coronavirus infections, including 761 imported cases.