But every day, even in the cold of the northern winter, he stands by the front door of his house to gaze at the forest with pride and happiness.

The trees were all planted by him and his family over 50 years, and his life has been dedicated to growing and protecting them.

Cao belongs to the Dao ethnic group, and lives in Tan Dan Commune in Ha Long Town of Quang Ninh Province, home to the world-famous bay.

The Dao used to be nomadic, felling forests to meet their temporary land needs for cattle and crops before moving on.

It was not until 1968 that they started to settle. By then Cao had started thinking about growing trees. He began to look around for seedlings of valuable timber trees such as ironwood, shorea and apitong.

They faced a lot of challenges in protecting the forest initially because there were no regulations for transferring forest lands to local residents, meaning his family had no authority to manage the forest.

In 1992 the government announced a policy of handing over forests for people to maintain and exploit sustainably.

“Thanks to that policy, I could continue growing timber while many people around us opted for growing wattle, also known as acacia.”

Now the forest has around 600 ironwood trees aged 40-70 years besides hundreds of other timber trees.

“I am close to death now and have fulfilled my wish to leave the future generations a forest with such valuable trees.

“Forests are humans’ lungs and should not be treated as public property. So I also wish my children and grandchildren will continue to grow trees and protect this forest.”

Trieu Tien Loc, 35, the youngest of his five sons, says: “Many traders have come to us and asked to buy the ironwood, but my family has been insistently saying no. My father has spent his entire life growing and protecting the forest, and we will continue that.”

“My family’s forest is a watershed forest, and there are large trees that can hold the soil and water, which protects us from landslides.”

Even without chopping down or selling any of the large trees, Cao’s family enjoys an income from the forest by growing other types of plants in it such as bamboo, herbs and medicinal plants.

Pham Van Sau, Party chief of Tan Dan, says Cao’s family is the only one in the commune to successfully grow timber and protect the trees for long.

“Many provincial officials have visited Cao’s forest. Two years ago we sought permission to turn the forest into an eco-tourism area, but have yet to get it.”

Quang Ninh has more than 337,000 hectares of forests, including 122,700 ha of natural forests. Its forest cover of 54.7 percent is among the highest of any province in the country.

Around 700,000 ha of land are still available in the country for growing forests, Vuong Van Quynh, former head of the Institute for Forest Ecology and Environment at the Vietnam National University of Forestry, had told VnExpress last year.

Vietnam has a target of growing around 200,000 ha of forests each year.

At the event (Photo: baoquocte.vn)

Washington D.C, (VNA) – The US will bolster support for countries in the Mekong subregion through the Mekong-US partnership, US Principal Deputy Assistant Secretary of State for the Bureau of East Asian and Pacific Affairs Atul Keshap said at a recent online seminar to reveal results of a report on transboundary rivers and addressing challenges in Mekong River.

He said the support will focus on the management of transboundary water resources, regional economic connection, human resources development and response to non-traditional security challenges, including those in the health sector.

The report was based on outcomes of a virtual Indo-Pacific conference on enhancing management of transboundary rivers hosted by the East-West Centre last October.

Speakers at the event said that the Mekong subregion is facing challenges in security, development and climate change.

Keshap expressed the US ’s concerns over impacts of hydropower dams in the Mekong River ’s upper reaches on food security, economic development and environmental conditions of countries in lower reaches.

The US highly appreciates Vietnam’s efforts in pushing ASEAN’s cooperation to help the Mekong subregion cope with such challenges, he said.

Congressman Ted Lieu also affirmed that the US Congress wants the US government to further boost cooperation with the Mekong sub-region via the US-Mekong partnership. Since the launch of the Lower Mekong Initiative in 2009, the US has earmarked 3.5 billion USD for countries in Mekong River’s lower reaches.

At the event, Vietnamese Ambassador to the US Ha Kim Ngoc underscored the significance of water security, especially transboundary water resources, to peace and prosperity in the region.

Countries in the Mekong subregion share responsibilities for the use and management of Mekong River’s water resources in a sustainable manner in a bid to offset impacts on development and the environment, he added.

The diplomat affirmed that Vietnam is always a responsible member in joint efforts to cope with challenges in environmental issues, climate change, economic development and security in the Mekong subregion.

He proposed that countries work together to build regulations and legally binding frameworks to manage transboundary rivers .

He also called on the US and other partners to invest in the region in the spheres of energy, infrastructure, climate change adaptation and sustainable development./. 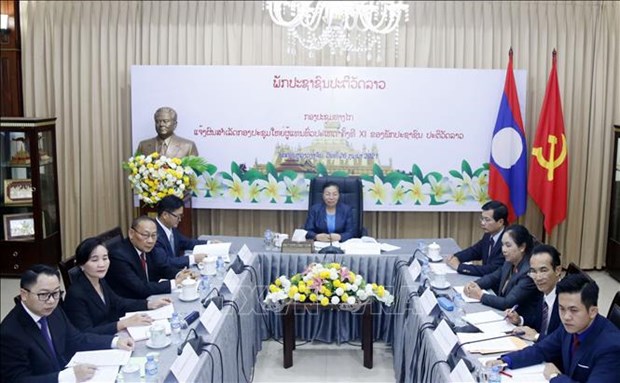 Soonthorn Xayachak (centre), Secretary of the LPRP Central Committee and head of the committee’s Commission for External Relations, at the videoconference (Photo: VNA)
Hanoi (VNA) – Outcomes of the 11th National Congress of the Lao People’s Revolutionary Party (LPRP) were informed to the Communist Party of Vietnam (CPV) at a video conference on February 26.

At the event, Soonthorn Xayachak, Secretary of the LPRP Central Committee and head of the committee’s Commission for External Relations, who is the Special Envoy of General Secretary of the LPRP and Lao Prime Minister Thongloun Sisoulith, said that the LPLP’s 11th National Congress was a success, becoming an important milestone to a new development period of the revolution of Laos.

Soonthorn Xayachak thanked the CPV Central Committee, CPV General Secretary and State President Nguyen Phu Trong as well as leaders of the Party, State and major agencies of Vietnam for extending congratulations to the congress and their Lao counterparts. He also thanked Vietnam for supporting Laos in organising the congress, while congratulating the CPV on the success of its 13th National Congress. 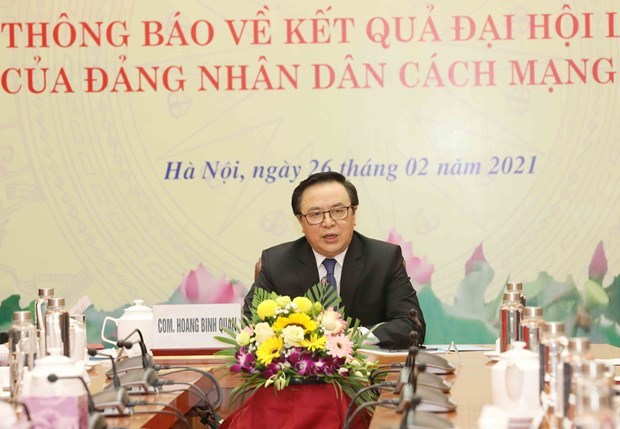 For his part, Hoang Binh Quan, head of the CPV Central Committee’s Commission for External Relations and Special Envoy of Party General Secretary and State President Nguyen Phu Trong, showed his delight at the fruitful results of the LPLP’s 11th National Congress and the election of deputies to the 9th Lao National Assembly, describing them as important political events of Laos, opening up a new period in the national defence and construction of Laos.

Quan expressed his belief that under the leadership of the LPRP, the Lao people will continue to gain new achievements in their renewal process and successfully realise the resolution released at the 11th LPRP National Congress, thus building a nation of peace, independence, democracy, unification and prosperity towards socialism.

He affirmed that the Party, State and people of Vietnam always give strong and comprehensive support to the national reform, defence, construction and development of Laos.

Quan and Soonthorn Xayachak shared the pleasure with the growth of the special solidarity between the two countries, which has brought about practical benefits to their people.

The two sides underscored the determination to work closely together to overcome difficulties and challenges to implement the resolution of each party, while coordinating closely in effectively implementing agreements reached by senior leaders of the two Parties and countries.

In any circumstance, the two sides will do their utmost to protect, maintain and reinforce the Vietnam-Laos ties and make the relations stronger, evergreen and everlasting to pass on to younger generations, they stated./.

The Hanoitimes – Relevant agencies have been asked to exert efforts in ensuring safety for students when they resume going to schools, and enforce strict measures to prevent the spread of Covid-19.

Hanoi students are set to come back to school on March 2 after one-month break and online classes to prevent the Covid-19 pandemic, according to a dispatch issued by the municipal People’s Committee on February 27.

The date applies for students from kindergarten to high school levels, while colleges and centers for vocational training and continuing education will reopen a week later.

University student schedules would be determined by the schools themselves, though the National Steering Committee for Covid-19 Prevention and Control recommended that they should reopen on March 15 to ensure social distancing measures.

Relevant agencies have been asked to exert efforts in ensuring safety for students when they resume going to schools, and enforce strict measures to prevent the spread of Covid-19.

To ensure safety for students, this weekend, schools have disinfected their campuses and prepare materials for the epidemic prevention, in addition to having a clear approach to managing students.

As on-site classes resume, parents need to take their children’s body temperatures at home, prepare them masks and personal items so they would not have to share them with classmates to avoid infection, the municipal authority said.

Previously, Hanoi students started staying home on February 1, about a week earlier than the expected beginning of the Tet break due to a new wave of Covid-19 sweeping nationwide and new cases of locally-transmitted cases were reported in the city. After the one-week holiday, they continued to study online.

Hanoi had not detected any new Covid-19 infections for 12 consecutive days. In the coming days, the capital city will relax its social distancing measures to help resume normal activities, but will continuously control, inspect and strictly handle violations of pandemic preventive measures.