Which is majority carriers

Tuan issued this directive at a Tuesday meeting with Airports Corporation of Vietnam (ACV) and the airport’s management board in Ho Chi Minh City.

He said the agencies must prepare to cope with the influx of air passengers and take steps to avoid congestion in the security screening area.

“The airport’s security area must increase its maximum capacity and mobilize more employees to serve passengers to avoid overcrowding that recently happened in the area,” Tuan said.

The domestic terminal at the country’s largest airport has seen frequent overcrowding over the past week, forcing passengers to queue up for hours at the security screening area . Between April 14 and 19, the airport saw up to 80,000 passengers a day.

Tuan also asked the Civil Aviation Administration of Vietnam (CAAV) to check the number of hourly flights at major airports as the passenger congestion was also triggered by carriers accumulating or canceling flights.

Nguyen Duc Hung, deputy general director of ACV, explained that the recent overcrowding at Tan Son Nhat was related to the limited capacity in the security screening area.

In the A and B lobbies, the airport is equipped to handle over 3,300 passengers an hour. However, from 6 a.m. to 7 a.m. last Saturday, the number of passengers waiting for security checks in the two lobbies was more than 5,100, exceeding the capacity by 25-35 percent.

Another factor in the recent overcrowding was a policy to random check 10 percent of passengers. Dinh Viet Thang, head of CAAV, said the random checks were meant as an additional security and safety measure.

To resolve the issue, ACV has been operating the security screening system to their maximum capacity and moved five security scanners from the international terminal to the domestic terminal. Airport authorities have also adjusted the number of flights during the peak hours to reduce congestion at the airport.

The Tan Son Nhat airport has been serving 36 million passengers a year since 2017, well above its capacity. Construction of a third terminal will begin this October.

With Vietnam having contained its latest Covid-19 outbreak, domestic air travel has returned to normal. The latest outbreak occurred in late January, just a few weeks before the Lunar New Year holiday, forcing many people to cancel travel plans.

HCMC – As many as 128,970 mobile subscriptions that delivered spam calls and messages have been deactivated since last July, according to the Vietnam Telecommunications Authority under the Ministry of Information and Communications.

November 2020 saw the largest number of deactivated mobile subscriptions at over 20,200.

Besides having their mobile subscriptions deactivated, individuals and organizations that deliver spam calls and messages are also fined in line with Decree 91 dated August 14, 2020, on fighting spam messages, emails and calls.

Since October 2020, mobile subscribers in Vietnam have been able to register for the Do Not Call list of the Information Safety Department to prevent spam calls and messages.

HÀ NỘI — A total of 14,386 people, mostly frontline medical staff, received COVID-19 vaccine shots on Tuesday, bringing the total number of vaccinated people in the country to 106,929 in 27 localities in the two phases of the vaccination drive, according to a report released on Wednesday by the health ministry.

Việt Nam recorded no new cases of COVID-19 on Wednesday morning, keeping the national tally at 2,801, according to the Ministry of Health.

Out of the total patients, 2,490 have been given the all-clear, while the death toll remains at 35.

Among patients still under treatment, 12 have tested negative for the coronavirus once, 11 twice and 17 three times.

Meanwhile, 39,385 people are under quarantine nationwide, including 514 at hospitals, 23,870 at concentrated quarantine facilities and 14,991 at their residences. 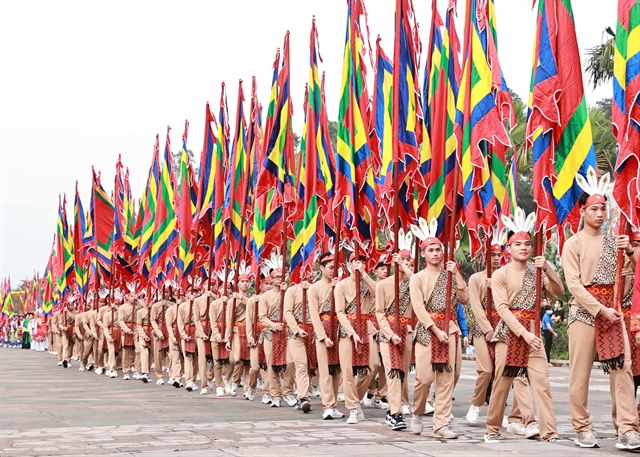 One hundred young men representing Lạc Long Quân’s and Âu Cơ’s 100 children in ancient costumes, hold their flags up high, expressing the vitality of the offspring of the fairy and dragon. According to legend, mother fairy Âu Cơ gave birth to a pouch filled with 100 eggs, which soon hatched into 100 beautiful children. It’s believed that these 100 sons are the ancestors of all Vietnamese people. In Phú Thọ Province, the Hùng Temple is where people celebrate the lineage of the Hùng Kings – all descendants of Lạc Long Quân and Âu Cơ. — VNA/VNS Photo Thống Nhất

HÀ NỘI — The main festival day commemorating the death anniversary of the Hùng Vương (Hùng Kings), considered the founders of Việt Nam, began yesterday with an incense offering ceremony at the main temple complex in the northern province of Phú Thọ.

At 6am on Wednesday morning, the 10th day of the third lunar month, President Nguyễn Xuân Phúc – along with representatives from the Party, State and Government, as well as people from across the country – started the pilgrimage at the central square at the foot of Mount Nghĩa Lĩnh and made their way up to the Đền Thượng (High Temple) at the top of the mountain.

A unit of the national guard carrying the national flag, the festival flag and a large wreath with the letters “Eternally remembering the Hùng Kings’ founding of the nation”, led the pilgrimage, followed by a group of young women in red traditional áo dài carrying flowers and offerings to the late kings along with 100 young men in ancient-style clothing representing 100 descendants of the Âu Cơ, a mountain fairy, and Lạc Long Quân, a sea dragon lord, who make up the creation myth of Vietnamese people.

Legend has it that the eldest son of Lạc Long Quân and Âu Cơ was made king. He named the country Văn Lang and set up the capital in Phong Châu (modern-day Việt Trì City), beginning 18 dynasties of Hùng Kings.

Chairman of the Phú Thọ Province People’s Committee Bùi Văn Quang, in his role as head of the ceremony this year, read a speech to commemorate the Hùng Kings, stressing the importance of the death anniversary, praising the merits of the kings and of Âu Cơ and Lạc Long Quân and extolling the perseverance of the ancestors in maintaining the integrity of the country’s sovereignty.

Quang also reported to the spirits of the kings on the major achievements the country has made in đổi mới (reforms), international integration, and socio-economic development.

The Phú Thọ official prayed for the legendary ancestors to send good weather, repel diseases – especially the COVID-19 pandemic, and bring about wealth and happiness for Vietnamese people near and far.

The speech also contained pledges to build a strong and prosperous country and to maintain peace and friendship with all humanity. 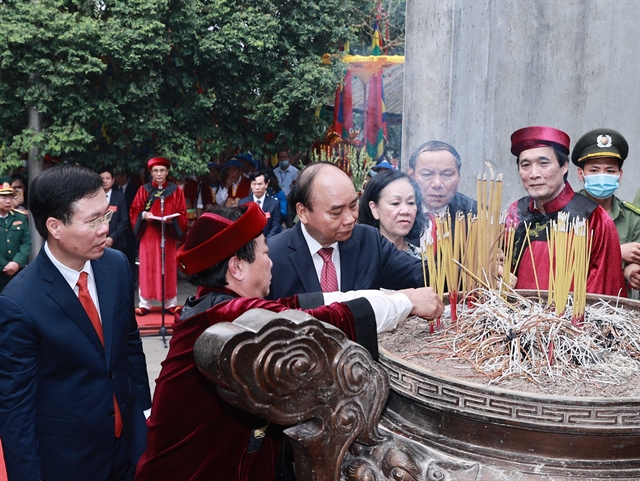 After offering incense at the High Temple, President Phúc and delegates laid floral tributes at the Hùng Kings Temple, and at the mural ‘Uncle Hồ talking with the vanguard units’ at the crossroad area adjacent to Giếng Temple.

The ceremony and related activities were held with COVID-19 precautions in place, though crowds of people proved hard to control and resulted in congestion around the highest temple.

The worship of the Hùng Kings was recognised as UNESCO Intangible Cultural Heritage of Humanity in 2013.

The kings chose Nghĩa Lĩnh Mountain, the highest in the region, to perform rituals devoted to rice and sun deities to pray for healthy crops.

To honour their contributions to the nation, a complex of temples dedicated to the kings was built on Nghĩa Lĩnh Mountain, and the tenth day of the third lunar month serves as the national commemorative anniversary for the kings.

An estimated 20,000 Vietnamese from all corners of the country arrived in Phú Thọ to pay their tributes in the morning. 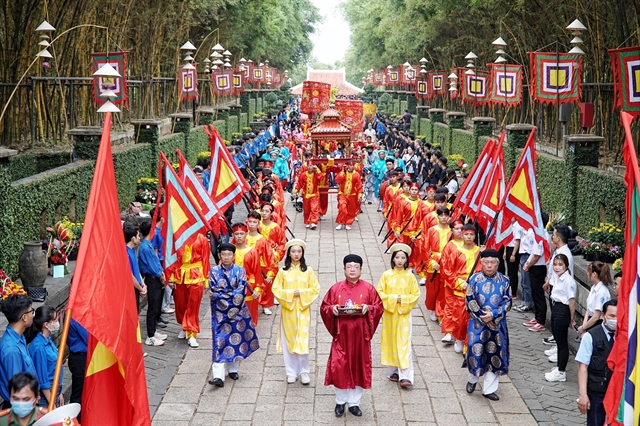 A procession in HCM City’s temple dedicated to Hùng Kings on the campus of the National History-Culture Park. — VNA/VNS Photo

Some 1,000 security personnel were deployed to maintain order at the complex and divert visitors from overwhelmed areas to other monuments, museums and temple at the site.

Many localities in the country, including HCM City, Cần Thơ and Đà Lạt, also held ceremonies to pay their respects to the legendary founders.

The festival ends on Thursday. — VNS

The foreign workers come from over 110 countries and territories globally, with most hailing from China, the Republic of Korea, Japan, and Taiwan.

It is anticipated that an increasing number of foreign citizens will be keen to return to work in Vietnam following the country’s successfully control of a number of coronavirus outbreaks.

The impact of the novel coronavirus (COVID-19) epidemic has led to continued labour shortages, especially in positions such as managers and experts, for many local businesses. Indeed, this factor is expected to badly affect the working progress and schedule of a number of key domestic projects.