The article titled “Vietnam should play a major part in Canada’s Indo-Pacific strategy” was written by Geoff Donald, the CABC’s advocacy chair and managing director at Asia Engagement Consulting Group.

According to him, with a rapidly growing population that is expected to reach 120 million by 2050 and a strong GDP forecast of 6.5 percent growth in 2021, Vietnam is a high-potential market for Canadian companies especially in key industries such as agro-food.

Since 2015, Vietnam has been Canada’s largest trading partner in Southeast Asia with two-way trade reaching a record 11.2 billion CAD (9.2 billion USD) in 2020. With the Comprehensive and Progressive Agreement for Trans-Pacific Partnership (CPTPP), Canadian and Vietnamese exporters and investors now enjoy increased market access and tariff reduction in a rules-based trading environment.

Two-way trade has increased by 12 percent over 2019 and by 37 percent compared with 2018, when the CPTPP began to take effect.

Canada’s and Vietnam’s commitment to multilateral trade through the CPTPP and critical new opportunities such as a potential Canada-ASEAN free trade agreement positions Vietnam as an essential partner for Canada in the decades ahead, the author affirmed

As Canada looks to develop an Indo-Pacific strategy, the CABA urges public policymakers and business leaders to prioritise this relationship by increasing support to small and mid-size enterprises looking to take advantage of the CPTPP; expanding Canada-Vietnam business collaborations in high-growth sectors such as agro-food, aerospace, infrastructure, financial services and digital economy; and negotiating a Canada-ASEAN free trade agreement to increase the overall opportunities for Canada in Southeast Asia.

The CABC acts as the voice of the Canadian private sector in ASEAN, and its members, including many of Canada’s leading firms such as Manulife, have a significant and longstanding presence in Vietnam, and many more companies are following suit. 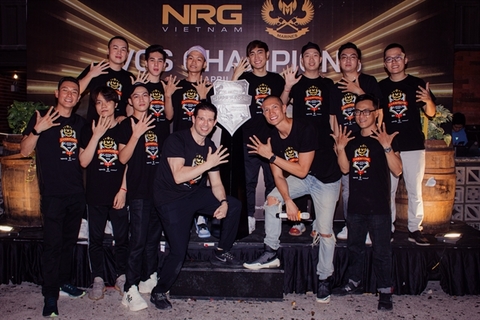 Following its acquisition of GAM Esports, the current VCS League of Legends Champions and five-time winners of the Vietnamese league, NRG will provide the team with top quality training, resources and infrastructure to elevate its prospects of bringing home the first LOL World Championship to Viet Nam.

TK Nguyen, CEO, NRG Asia, said: “With the expansion of NRG into Southeast Asia, we are excited to begin this new journey headquartered here in Viet Nam. Starting off with the five-time League of Legends VCS Champions, GAM, our goal is to elevate GAM from being Viet Nam champions to leading World Championship contenders.

“In addition, having the opportunity to work with an exceptional leader like Andy Miller, who has successfully created multiple championship esport teams, is beyond exciting for all of us. We can’t wait to bring a world championship back to Viet Nam.”

NRG co-founder and CEO Andy Miller said: “With so much passion around esports in Southeast Asia, we thought Viet Nam was the perfect place to launch NRG’s global expansion. Besides, Randy Dobson, CMG.ASIA chairman, and Mark Mastrov, the founder of 24-Hour Fitness and co-founder of NRG Esports, have a history of successful collaborations going back over two decades.” — VNS

At the meeting with his Lao counterpart, Minister Ngo Xuan Lich confirmed that the special friendship and solidarity between Vietnam and Laos, which has been developing through the shared history of national salvation and building, will further be cemented and developed despite current complicated regional and international situations.

He strongly believed that the relations between the two countries will help strengthen the power of each country and foil hostile forces’ plots to undermine this solidarity.

Meanwhile, at the meeting with his Indian counterpart, Minister Ngo Xuan Lich expressed his pleasure to meet her again since their first bilateral meeting in October 2017 in the Philippines during the ASEAN Defense Ministers Meeting Plus.

The Vietnamese minister confirmed that Vietnam and India has a traditional relationship and Vietnam highly evaluates India’s role and status in the region and supports India’s “Act East” policy.

He also thanked India for its support and assistance for Vietnam in defense, especially in training and participation in the UN peacekeeping operations.

For her part, the Indian minister stressed that India attached importance to developing a comprehensive and trustful partnership with Vietnam, including that of the defense. She agreed with her Vietnamese counterpart on contents of cooperation in the upcoming time.

Minister Ngo Xuan Lich expressed his pleasure to welcome his India counterpart in Hanoi as soon as possible.

Born and raised in a family of seven brothers and sisters in a poor village about 30 kilometers from Sa Pa, a popular tourist town in northern Lao Cai Province, ethnic Dao chef Su as a child assisted his parents to cultivate rice, regardless of the biting cold.

One of the best-performing village students, he secured a ticket to Hanoi University of Technology in 2010, when according to local custom, he wed aged 18.

However, unable to abandon his family for Hanoi, Su found part-time work and enrolled at Lao Cai Medical College.

As a porter, he earned about VND10,000 (0.44) a night to cover his school expenses and support his wife and parents back home.

After graduation, he struggled for years to gain employ at the local medical center, but to no avail.

In 2014, Su’s first born turned one. Expecting another child, he left Lao Cai to grow rice and breed livestock back home, though due to inexperience, both projects ultimately failed.

A year later, a tourism complex was built on Mount Fansipan at 3,145 meters (10,311 feet), nicknamed ‘the roof of Indochina’ and a Mecca for Vietnamese trekkers, with a cable car service to Sa Pa entering operation.

Taking advantage of the new opportunity, Su applied to work as a waiter at Van Sam Restaurant, serving the cable car station, though he longed to one day return to the medical profession.

Daily, Su rode his old motorbike on the nearly 30 bumpy kilometers to the restaurant, where he did his utmost to learn and grow. Even in the presence of foreign colleagues, unable to communicate, he would take notes with his eyes.

“Sometimes, I felt frustrated since I had to learn everything from scratch, but thinking of my family’s strife, I was determined to succeed,” Su recalled his first days in the kitchen.

His first monthly salary of VND2 million, considered a large sum locally, was more than he had ever held in his hands at any one time.

Encouraged by his colleagues, Su gradually took to life as a chef, his calloused hands skillfully molding pruned vegetables into flowers and animals.

With his talent, Su was soon promoted to assistant chef, and after a year, had mastered local specialties, as well as other Asian and European cuisines.

“I never thought of going to the kitchen to cook, let alone memorizing each recipe to make a delicious and beautiful meal,” he commented.

Since becoming the head chef, Su no longer has to work as a xe om (motorbike taxi driver) at night to earn some extra cash.

Now, Su still has to travel nearly 60 kilometers from his home to the restaurant, though the road has been paved and cleared of potholes.

Standing in front of his stilt house, Su shared his biggest wish is that his two children could gain access to education so their future would be bright.

Lao Cai is famous for the popular highlands resort town Sa Pa that boasts a cool climate and green scenery, and is home to ethnic minority groups like the Hmong, Red Dao and Tay who mainly subsist on agriculture.

The event was attended by heads of ADSOM+WG of ASEAN member countries, representatives of Defense Ministries of the bloc’s partners (Russia, China, the U.S., Japan, the Republic of Korea, Australia, New Zealand, India) and representatives of the ASEAN Secretariat.

The Vietnamese delegation to the meeting was led by Senior Colonel Pham Manh Thang, Deputy Director of the Department of Foreign Relations under the Vietnamese Ministry of National Defense.

This was the third meeting that Brunei had hosted during the country’s 2021 ASEAN Chairmanship Year.

Speaking at the opening ceremony, Head of Brunei’s ADSOM+ WG highlighted the active participation of ASEAN member countries and the bloc’s partners in the event, affirming that their attendance showed  their support for Brunei as ASEAN Chair in 2021. He expressed belief that the meeting will be a success.

As reported, this ADSOM+WG was held to review the final preparations for the 8th ASEAN Defense Ministers’ Meeting Plus (ADMM+) which is scheduled to take place virtually on June 16.  Delegates discussed and agreed on the agenda and draft joint statement for the upcoming 8th ADMM+.