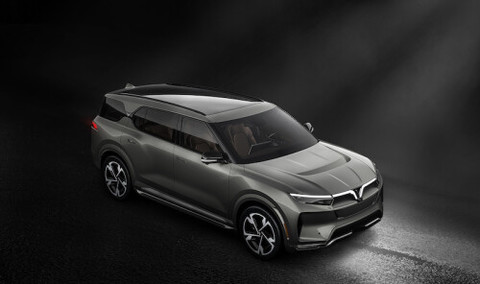 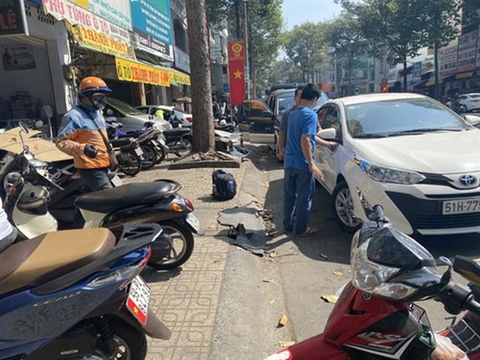 People line up at vehicle restoration shop in District 5 to get their cars upgraded and repaired before Tet. — Photo nld.com.vn

With Tet (Lunar New Year) approaching, many car owners in HCM City have lined up at vehicle restoration shops to repair and upgrade their vehicles.

People like Dao Ngoc Anh of Thu Duc City do this every year at this time.

“I know it will be very crowded at the end of the year, but I still decided to have the car repaired and upgraded now to make it look at its best during Tet,” Nguoi Lao Dong (Labour) newspaper quoted him as saying.

Dinh Dung Tuan, owner of a vehicle restoration shop on An Duong Vuong Street, District 5, said the number of customers who come to have their car fixed is two or three times higher than during normal days.

At the end of this week the number could increase much further, he said.

“Over the week, my staff had to work overtime.”

The services that car owners request now include retouching scratches, painting, nano or vinyl wrapping, and cleaning of interiors.

They can also choose service packages at various prices.

Tran Van Binh, owner of a vinyl car wrap shop on Tran Binh Trong Street in District 5, explained that prices are up because he has to pay 1.5-2 times his workers’ normal salary. — VNS

According to the department’s proposal summited to the municipal People’s Committee, these vehicles have been banned to enter the city center, run on streets of Phan Dinh Giot (on the section from Nguyen Van Troi to Truong Son, Truong Son (on the section from Phan Dinh Giot to Hong Ha), Tran Quoc Hoan, Hoang Van Thu, Nguyen Van Troi, Nam Ky Khoi Nghia (on the section from Nguyen Van Troi to Dien Bien Phu) , Vo Van Kiet from 5 am to 1 pm and 4 pm to 10 pm from now until 2022.
They will not be also allowed to travel on Hanoi Highway (on the section from the National Road 1A to Cat Lai interchange); and national roads of 1A, 1K, 13, 22 and 50, Nguyen Van Linh and Nguyen Luong Bang streets from 6 am to 8 am and 4 pm to 7 pm.
From 2020-2025, the municipal authorities will limit three and four-wheel non-motorized vechicles on inner-city streets and adjust travelling tiem from 5 am to 10 pm. These old vechicles will be officially banned to travel through the city center by 2025.
There are 39 traffic accidents related to the three and four-wheel non-motorized vechicles from 2017 to present, said the department. 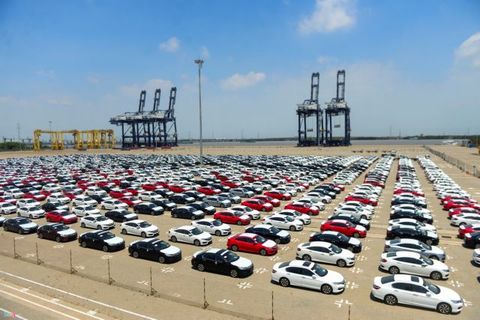 Viet Nam spent US$213 million importing cars in January, a 34.3 per cent drop compared to the previous month, reports the General Department of Customs.

Nine-seater passenger vehicles or passenger cars of under nine seats are 5,203 units worth nearly $102 million, accounting for 62.4 per cent.

The number of vehicles with less than nine seats imported dropped by 27.4 per cent in January or a decrease of 1,965 units compared to December 2020.

For transport vehicles, the import volume stood at 2,230 units worth $60.6 million, down 48.6 per cent in volume and 40.9 per cent in value compared to December. January also saw an import volume of 907 special use vehicles valued at $50 million. Of this figure, 736 units were imported from China via the northern border gate of Lang Son of Viet Nam, accounting for 81 per cent of the total number of this type imported into the country.

Viet Nam’s localisation rate for passenger cars of under nine seats is 7–10 per cent, much lower than the target of 35–45 per cent set for the car industry 20 years ago.

With nearly 300,000 cars sold in 2020, Viet Nam overtook the Philippines to become the fourth largest automobile market in Southeast Asia.

The AAF complied the data provided by automobile associations from countries in the region, except for Timor Leste, Laos and Cambodia.

Brunei became the only ASEAN member country to post an increase in car sales from January to November last year.

It said economic activities across the region were severely disrupted by business and social lockdowns imposed to help curb the spread of the COVID-19 pandemic. The automobile industry was one of the worst-affected markets in the region last year.

Motor vehicles sold in ASEAN declined 29 per cent to 2.45 million units from January till November 2020 from 3.46 million units in the previous year. — VNS

Hanoians are excited to visit and enjoy the spring atmosphere at flower street Home Hanoi Xuan 2021. Taking inspiration from the beautiful countryside with beautiful flowers and lush grass, the street brings a peaceful and warm space for visitors to experience the traditional Tet in Hanoi.

At the end of the road, Xuan field awaits with sugar cane, cornfields, paddy fields, and vegetable garden, bringing the most authentic experience of the countryside. In the street, there are also swings, bicycle, monkey bridge, village well, water wheel, and scarecrow for visitors to capture the beautiful moments of spring at Splendora.

Home Hanoi Xuan 2021 also recreates the image of a delicate and rich Hanoi through cultural and artistic activities, connecting the past heritage to the present, introducing the old Tet style into the flow of modern life. These include Hanoi street food, Bat Trang pottery village, Chuong village leaf hat, Dong Ho painting, Silk weaving looms, and much more.

The flower street also has a Think Playground recycling playground for children to have fun and unleash their creativity while reinforcing the awareness of protecting nature and the environment with recycled toys.

The flower street in the neighbourhood of Xuan, Ben Xuan, Vuon Xuan, Cho Xuan, Hoa Xuan, and Dong Xuan will be open for free from 9 am to 9 pm on February 11-17 (December 30 to the 6th of the Lunar calendar). Particularly from February 7-10 (December 26 to 29), the flower street will welcome guests with invitation tickets.

The buffalo statues are different in sizes, depending on the market demands. The raw material for making the statues is alluvial clay from the Thu Bon river.

After being exposed to the sun for getting dry naturally from 4 days to 1 week, statues are put in the kiln, then being polished and painted.

Ms. Vo Tan Kim Chi, from Thanh Ha pottery village, said that the creation of buffalo statues requires meticulousness, ingenuity and persistence. Artisans must consider how to burn them to an appropriate level so that the statues will not be broken.

Thanh Ha pottery village is located on the banks of the Thu Bon River in the city of Hoi An, Quang Nam province. Legend has it that in the beginning of the 16th century, artisans from Thanh Hoa province settled in Hoi An and established the village. They did their traditional craft and handed it down through the generations.

During the 17th -18th centuries, the craft flourished, providing pottery products to provinces from Thua Thien Hue to Binh Dinh. At that time, the village’s products were also exported to Japan, China and Spain via the Hoi An Trading Port.

For hundreds of years, although the traditional craft has undergone some ups and downs, the locals have kept their love and passion for the craft. They have, so far, kept its traditional and unique method of making pottery – handmade and wheel thrown and their products are not enamelled or heated by a traditional wood kiln.

Some pictures taken at the ancient pottery village before Tet:

Trays featuring food from the country’s three regions and various offerings for the Lunar New Year festival, known locally as Tet, have been vividly created using clay by an artisan in Ho Chi Minh City.