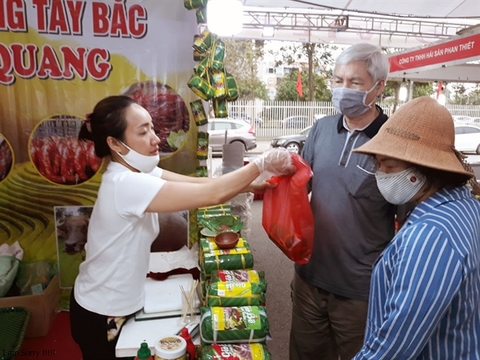 Specifically, the five weeks will have a scale of about 100 standard booths each week and will be held in the districts of Ha Dong, Hai Ba Trung, Nam Tu Liem, Quoc Oai and Ba Vi. Businesses and co-operatives will exhibit their food products, textiles, footwear, consumer goods, OCOP products of Ha Noi and other provinces and cities.

Notably, Ha Noi will support 50 per cent of booth costs for participating units with a maximum of two booths per unit; similar support will be provided to each locality. In which, the city will pay attention to support localities and businesses of Ha Noi and other provinces in consuming agricultural products, aquatic products, and fruit, which face difficulties in consumption due to the impact of the COVID-19 pandemic.

At the same time, it will also strengthen communication and promotion, create the best conditions for businesses to reach consumers and expand the market. The participating units should prepare the source of goods; deploy trade promotion programmes, promotions, advertisements; introduce and promote products to bring practical benefits to customers and visitors who participate in the events.

Products displayed and sold at the events are Vietnamese products guaranteed for quality, food safety and traceability in accordance with regulations.

In order for the programme to be effectively implemented, the Ha Noi Department of Industry and Trade also requested the People’s Committees of districts and towns to review all businesses and co-operatives to participate in the Vietnamese Goods Week of Ha Noi 2021, especially agricultural products which are facing difficulties in consumption and OCOP products.

Acting director of Ha Noi Department of Industry and Trade Tran Thi Phuong Lan said that the programme would contribute to the effective implementation of the campaign “Vietnamese people give priority to using Vietnamese goods” and other programmes of the city such as the trade promotion and One Product One Commune (OCOP) programme.

Therefore, it would help consumers access and purchase Vietnamese goods with reasonable quality and price, thereby promoting the production and business activities of enterprises in the area, contributing to completing the GRDP growth target tasks in 2021 and the 2021-2025 period. — VNS

The index remained in the red throughout the day and fell to the 1,150 range before rebounding in the last hour of trading to end on a near 22-point drop. This is its biggest loss in a day in over six weeks.

VN-Index has lost nearly 33 points in the last two sessions. It needs to gain more than 42 points to break the all-time high of 1,204 points recorded in April 2018.

Trading value on the Ho Chi Minh Stock Exchange (HoSE), on which the index is based, jumped over 14 percent to VND17.65 trillion ($761 million), the highest in the last 10 sessions. The bourse saw 408 stocks lose and 75 gain.

The VN30 basket, comprising the 30 largest capped stocks, was a sea of red with only VIC of biggest conglomerate Vingroup gaining 1.3 percent.

SSI of leading brokerage SSI Securities Corporation led the blue chip fall with a 4.9 percent drop to a six-week low. This is the biggest loss in a day for the ticker since hitting this year’s bottom on Feb. 1.

TPB of private TPBank followed with a 4.8 percent loss, also hitting a six-week low. This is its fourth losing session in a row.

Other major losers included HDB of HDBank, down 3.8 percent, CTG of state-owned lender VietinBank, down 3.7 percent, and BVH of insurance company Bao Viet Holdings, down 3.6 percent.

Outside the VN30 basket, SSB of Southeast Asia Commercial Bank (SeABank) started off the first trading day on the HoSE with a 19.9 percent gain.

FLC of real estate developer FLC also bucked the trend with a 6.6 percent increase, its fifth gaining session in a row.

Foreign investors continued to be net sellers for the 23rd session in a row to the tune of VND364 billion, up 29 percent.

The HNX-Index for stocks on the Hanoi Stock Exchange, home to mid and small caps, fell 1.34 percent, while the UPCoM-Index for the Unlisted Public Companies Market dropped 0.79 percent.

According to the initial schedule proposed by the Brazilian Embassy, the film week is scheduled to run from May 10 to May 14 at the National Cinema Centre.

The event is set to feature five outstanding movies, including Nise: The Heart of Madness, Trinta, and A Story of Love and Fury.

Through the event, the Brazilian Embassy wants to introduce some of the unique aspects and characteristics of Brazilian culture to local audiences.

During the course of the week, all movies will be shown in their original language whilst featuring both English and Vietnamese subtitles. Indeed, all movies will only be screened as part of the film week after being granted a license by the Vietnam Cinema Department.

An opening ceremony of the week will take place on November 16 and last until November 23.

This year, the organization of event will be geered towards strengthening the great national unity bloc as well as preserving the values of the traditional cultures of Vietnam’s ethnic groups.

An opening ceremony of the week will take place on November 16 at the Vietnam National Village for Ethnic Culture and Tourism and last on November 23.

Within the framework of the annual event, there will be a host of special activities such as welcoming the moon lady and a number of folk performances of the Thai people (Nghe An); introduction and recreation of the wedding ceremony of the Pa Then ethnic group (Ha Giang); the performance of unique art forms of the Tay and Nung people (Lang Son), and the Kate festival of the Cham people (An Giang).

The program aims to preserve and uphold the traditional cultural value of Vietnamese ethnic communities and enhance the great national unity bloc, while  promoting the Vietnam National Village for Ethnic Culture and Tourism as an attractive tourist destination among visitors from both home and abroad.

The Great National Unity week – Vietnam Cultural Heritage week is an annual activity hosted by the Ministry of Culture, Sports and Tourism in coordination with the Central Committee of the Vietnam Fatherland Front. The activity is of practical significance to honor and encourage the great unity of the Vietnamese people and the values of Vietnam’s cultural heritage.

A heatwave is forecast to scorch northern Vietnam next week, with temperatures expected to reach 39 degrees Celsius.

A low-pressure area located west of the country is expanding its effect, according to the National Center for Hydro-meteorological Forecasting.

The scorching weather is forecast to appear first in localities in northwestern Vietnam on Sunday and Monday, with the highest temperature measured at 35 to 37 degrees Celsius.

From Tuesday, the heatwave will cover the entire northern region, as well as north-central and central provinces.

In Hanoi, the temperature will peak at 35-36 degrees Celsius on March 31 and April 1, while humidity will remain at 50-60 percent.

The heatwave is expected to linger until April 2.

A renowned Vietnamese designer will have his collection featured at the New York Fashion Week (NYFW), one of the ‘Big Four’ fashion weeks in the world, next month in a first for his country.

The official website of the NYFW, which is usually held in February and September of each year as a semi-annual series of events generally lasting seven to nine days, has released a list of designers for its upcoming show in February.

Nguyen Cong Tri, 41, a respected name in the Vietnamese fashion industry, has been invited by the NYFW organizers to introduce his collection at the show taking place between February 6 and 13.

This is the first time a Vietnamese designer has received such an honor.

“Each of his collection is state-of-the-art and a fascinating story to be told,” the NYFW’s official website wrote in the introduction about Tri.

“His work as the Chief Designer for CONG TRI brand provides unique statement designs for women’s day and evening style.”

The introduction went on to highlight some of Tri’s significant achievements, including being the first Vietnamese member of the Asian Couture Federation in 2014.

The collection for the upcoming winter by Tri will be introduced at Spring Studio’s Gallery II at 2:00 pm (New York time) on February 11, according to the NYFW’s schedule.

On this occasion, Tri will also have a chance to cooperate with New York-based Kate Young, one of the most in-demand stylists in Hollywood and fashion who works for Dior, Chanel, Valentino, Victoria’s Secret, for the fashion photography part.