VinaPhone has announced that its subscribers who use iPhone 12 can use the 5G network.

Just a day earlier, Viettel also announced that its subscribers would be the first iPhone 12 users in Vietnam to experience 5G technology.

According to the 2019 Information & Communication whitepaper, Viettel currently accounts for 50% of the mobile phone market share in Vietnam, while VNPT holds 24.5%.

So far, Apple is the 8th smartphone manufacturer with devices compatible with 5G networks of Vietnamese carriers, which are under trial. 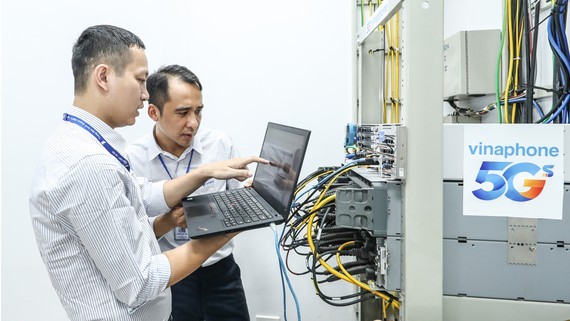 VinaPhone from VNPT Group is the first telecoms enterprise in Vietnam to pilot the 5G technology for commercial purposes. (Photo: SGGP)

Facing the same situation are the two other domestic telecoms giants – Viettel and MobiFone.

Confirming this state, Deputy Director of the Vietnam Telecommunications Authority Nguyen Phong Nha shared that many telecoms carriers are facing the challenge of maintaining the income of traditional telecoms services since Over-the-Top services (OTT) are gradually replacing them.

Therefore, those carriers have to expand their services and adjust their operation models to make good use of cutting edge technologies like 5G, said Mr. Nha.

The good news is the earnings from data services have experienced impressive increases even though the mobile data fees in Vietnam are among the lowest in the world.

In order to better serve telecoms customers in the near future, the Vietnam Telecoms Authority suggests that businesses of the field upgrade their infrastructure to keep up with the trend of virtualization and hyper-convergence in ICT.

Particularly, the 5G technology is predicted to be the basic platform to develop and integrate other platforms, applications, and services. This state-of-the-art technology is also a powerful tool to promote the digital transformation process.

The technology is expected to easily satisfy business, security, national defence goals as well as tasks for socio-economic development and disaster prevention and control.

In December 2020, VinaPhone – member of VNPT Group – was the first in Vietnam to activate the 5G technology for commercial purposes in Hanoi and Ho Chi Minh City. This technology is 10 times as fast as its 4G counterpart and the nearly-zero latency.

This is very promising, seeing that 5G can boost the implementation of advanced technologies like AI, IoT, automation in establishing smart cities and improving the work performance in businesses.

The smart-home market is attracting much interest from foreign and local companies due to its enormous potential, with experts estimating it to grow into a behemoth worth millions of dollars.

According to a report by Statista, the German company providing market and consumer data, this year the market is expected to be worth US$184 million.

The revenue is expected to show an annual growth rate of 25.01 per cent, resulting in a projected market volume of $449 million by 2025.

The average revenue per smart home currently is expected at around US$77.56.

The market is expected to grow to US$330 million in 2022, cybersecurity firm BKAV estimated.

BKAV was quoted by Investment Review as saying 500,000 households were equipped with smart-home systems by 2018.

Experts said smartphones and the internet, especially 5G technology, have becoming more and more popular among Vietnamese consumers, and increasing incomes have encouraged middle-class consumers to opt for smart-home technologies.

K. M. Leong, general manager for Southeast Asia of Xiaomi International told Viet Nam News: “Viet Nam is definitely a promising and dynamic market in the region and the smart-home and IoT landscape is certainly growing.

“As smart homes become more popular it encourages major developers to use smart technology. Amid the technology 4.0 trend, we think the time has certainly come for this industry.”

The Government’s development directions on Industry 4.0 directly enable the advancement of technology through a number of platforms such as smartphones and common apps such as wallets, health trackers, translation, and maps.

“Support from the Government will also open up a lot of opportunities for the market and companies and enable consumers to experience smart living.”

According to Leong, Viet Nam leads the world in the growth of smartphone traffic and number of millennials, and the latter’s growing tech-savviness will boost user preference for technology.

A Bkav spokesperson was quoted by Vietnam Investment Review as saying the smart-home market would soon boom.

A VNPT representative agreed, saying the market has great potential and is huge with millions of clients.

Many companies have launched a slew of new products.

VNPT Technology has launched the ONE Home solution.

Xiaomi has continued to strengthen connectivity across devices on its AIoT platform.

It plans to invest further to create better strengthen connectivity between devices on AIoT. — VNS 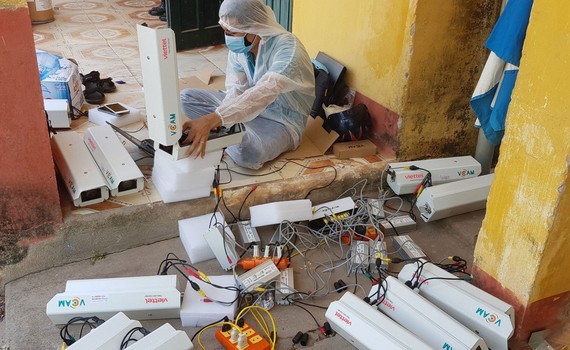 At the beginning of May, MIC continued to release a formal document to the People’s Committees of all provinces and municipalities regarding the installation of monitoring camera systems in centralized isolation areas to ensure medical regulations are strictly obeyed.

Accordingly, MIC assigned Viettel Group and VNPT Group to be responsible for this camera installation task. They had to cooperate with the localities to finish this task as soon as possible. 3,000 cameras were then successfully set up in centralized isolation locations in the Northern regions. Viettel Group also added another batch of 1,000 cameras in 5 days at 125 communes of Bac Giang Province, the hot spot of the latest Covid-19 outbreak in Vietnam.

All images recorded by these cameras are sent to and processed at the Covid-19 Operation Center, which stores them with a cloud-based service so that all regions in the country can access them 24/7, helping them timely tackle any possible problem arisen.

Recently, MIC has proposed the use of a special digital bracelet on isolated people to the National Steering Committee for Covid-19 Prevention and Control. This method has already been used in many nations, and has proved its usefulness.

MIC, therefore, suggested the use of similar made-in-Vietnam digital bracelets that apply GPS technology to record the locations where quarantined or isolated people visit. Thanks to a long-lasting battery of 30 days, the device can send warning signals to the operation center whenever monitored people try to destroy them or to get out of the quarantined zone.

MIC asked the permission to assign certain domestic technological enterprises to develop these practical devices using the fund raised from the community. These kinds of equipment should be ready 4 weeks after project approval. They have the two main features of detecting close contact via Bluetooth Low Energy (BLE) technology and checking the rule observation of wearers via GPS technology.

This digital bracelet can amend the situation when monitored people do not own or bring along a smart device, they purposely turn off the Bluetooth function on their smart devices. 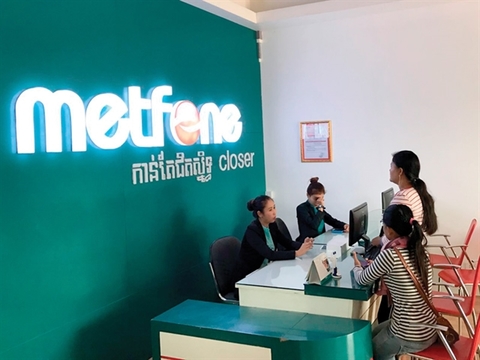 Viettel’s business in Laos. Viettel was the first to manufacture 5G devices in Viet Nam. — Photo courtesy of Viettel

Having gained a foothold in the domestic market, many technological platforms created by Vietnamese companies are now extending their reach globally and been welcomed in foreign markets.

The Military Industry and Telecoms Group (Viettel) was the first to manufacture 5G devices in Viet Nam.

It has also taken the lead in developing an online charging system (vOCS), which not only calculates charges but also records customers’ use of telecom services. The application has served 170 million customers around the globe since 2017.

Doing business in 10 markets abroad, Viettel has applied for and been granted four patents in the US, which will help its products compete with international rivals.

The Ha Noi Moi (New Hanoi) newspaper quoted Nguyen Cuong Hoang, Deputy General Director of the Viettel High Technology Industries Corporation, as saying that the vOCS 4.0 version has new functions and will open up more business opportunities for the corporation around the world.

Meanwhile, FPT is not only a supplier of technological solutions, applications, and products in many important fields but also a major partner of a number of businesses around the world.

Its artificial intelligence (AI) platform FPT.AI now has nearly 500,000 users, generating VND1.84 billion (US$79,600) in revenue by the end of the first quarter this year.

In 2020, it beat a number of major rivals to secure a contract worth $150 million to carry out digital transformation at a leading automobile company in the US.

The Vietnam Posts and Telecommunication Group (VNPT), another of the country’s telecom giants, has developed its ONE Telco device management platform, which assists multi-device management on large-scale telecoms networks.

Put into use in 2017, the platform has been managing nearly eight million devices, helping VNPT substantially reduce operational costs and saved millions of US dollars purchasing foreign copyrights.

VNPT said ONE Telco has been applied by many domestic and foreign telecom service providers, including those in Thailand, Indonesia, and Myanmar, helping to manage nearly 10 million devices.

BioID, a biometric identification and authentication platform, is also being used by five large Vietnamese clients and is expected to bring in about VND5 billion in revenue for VNPT this year.

Ngo Dien Hy, General Director of the VNPT Information Technology Company, said the group expects BioID will become the No 1 biometric identification and authentication platform in Viet Nam and be deployed in markets such as Laos, Cambodia and Myanmar. — VNS

To ensure the progress of the camera installation project for the COVID-19 prevention and control, the Ministry of Information and Communications asked the provincial and municipal People’s Committees to instruct relevant agencies to make lists of local quarantine zones and send them to the provincial and municipal Departments of Information and Communications.

The Departments of Information and Communications of provinces and cities will cooperate with the provincial and municipal Health Departments and the two businesses to conduct surveys and develop suitable plans on camera installation in concentrated quarantine zones.

Concentrated quarantine zones are requested to cooperate with the provincial and municipal Departments of Information and Communications and businesses to soon realize the approved plans to serve the COVID-19 prevention and control.

Meanwhile, the provincial and municipal Departments of Information and Communications are asked to work with the Health Departments of provinces and cities to make lists of personnel for managing and operating camera systems at concentrated quarantine zones.

The Ministry of Information and Communications also requests participating forces to strictly observe COVID-19 prevention and control regulations regulated by the National Steering Committee for COVID-19 Prevention and Control and the Health Ministry while conducting surveys on internal network and camera installation.