All the five cases in Hai Duong are those who had already been put into centralized quarantine zones before being confirmed infected with the coronavirus. They are being treated at the northern province’s field hospitals.

The five imported cases are those entering Vietnam through Ha Tien international border gate in the Mekong Delta province of Kien Giang last Thursday and Friday, and were quarantined upon arrival. Sunday test results confirmed they were postivive for the virus.

Vietnam declared 16 patients free of Covid-19 on Monday, bringing the number of active cases down to 530.

The country has recorded 857 community transmissions in 13 localities since the third wave began on January 28 after a 55-day clean streak.

Hai Duong remains the biggest hotspot with 673 cases, followed by Quang Ninh (61) and HCMC (36). Ten of the 13 localities haven’t recorded any new community transmissions in the past 15 days. 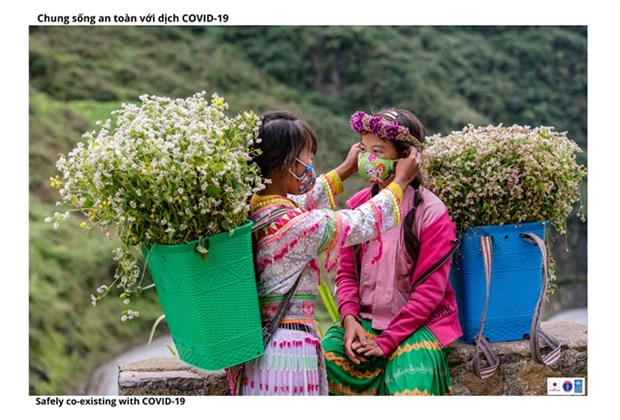 Hanoi (VNA) – The Ministry of Health and the United Nations Development Programme (UNDP) have called on people to take action to prevent COVID-19 pandemic for sustainable economic development through a photo series about the lives of ethnic minority traders in the northern mountain province of Ha Giang.

The photo series is part of a project on strengthening communication about COVID-19 prevention in the new normal for small businesses run by ethnic minorities in the province.

The project is a collaboration between the Ministry of Health, UNDP in Vietnam and the Embassy of Japan in Vietnam with an aim of implementing sustainable development goals towards fairness and equality in healthcare among ethnic groups in the country. It includes a series of communication activities that aim to enhance knowledge, understanding and changes in action and habits of people to stop the COVID-19 pandemic, especially among ethnic minorities.

This will help to reduce the negative effects of COVID-19, so that people can continue to develop economically and sustainably, stabilise their lives and overcome difficulties such as farmland shortages, lack of domestic water and harsh natural conditions.

The series of photos was taken in late 2020 and early 2021 in four highlands districts: Dong Van, Meo Vac, Yen Minh and Quang Ba, which are the poorest localities and the most inhabited by Mong ethnic people. The series displays the daily work of traders, especially when they have taken preventive measures for protecting the health and safety of each individual and the community.

As part of the project, ethnic minorities of Dong Van district were given knowledge and provided with practical guidance on pandemic prevention and control.

With the support of local health workers, people have started disease prevention activities, such as wearing masks, washing hands with antiseptic, sanitising their homes and ensuring personal hygiene in work and daily life.

The Hanoitimes – Dramatic drops in arrivals were seen in major markets such as China, South Korea, Japan, Taiwan (China), Europe and the US.

Vietnam welcomed nearly 3.8 million international visitors in the first eight months of 2020, a drop of 66.6% over the same period last year, as the country keeps its borders closed to foreigners to contain Covid-19, according to the latest report from the General Statistics Office.

The central government has only authorized some repatriation flights to bring Vietnamese citizens home. Foreigners such as expats, diplomats, business executives and highly-skilled laborers are allowed to enter in some exceptional cases.

In the first eight months of this year, Asian visitors still accounted for the majority of total tourist inflows, with nearly 2.76 million, down 68.8% over the same period last year.

In mid-August, the Vietnam Aviation Business Association (VABA) petitioned the government to reopen international routes to countries deemed to be safe from Covid-19.

The Civil Aviation Authority of Vietnam (CAAV) has discussed with the authorities of some countries which are considered to be safe on screening measures. Some countries have agreed to open air routes to Vietnam, provided that screening measures are taken. Therefore, the resumption of international air travel depends on the intake capacity of quarantine facilities as well as that of the health sector in the country.

The National Steering Committee for Covid-19 Prevention and Control will decide when to reopen international routes and issue regulations such as quarantine fee collection and pandemic control protocols.

13 more people have tested positive for SARS-CoV-2 in Vietnam, raising the total number of patients in the country to 2,461, the Ministry of Health reported on Monday evening. 
According to the ministry’s report, eight of the new patients are from Hai Duong Province.

The five imported patients include three women and two men aged between 21-34 who entered Vietnam through Ha Tien International Border Gate in Kien Giang Province on February 25-26. They were sent to a local quarantine area upon arrival and tested positive for SARS-CoV-2 on February 28.

The patients are now being treated at the Ha Tien City Healthcare Centre.

With these new infection cases, the number of Covid-19 patients in Vietnam has increased to 2,461, including 857 locally-transmitted cases reported since the new outbreak started in Hai Duong on January 28. Hai Duong Province alone has recorded 673 cases.

As of 6 pm on March 1, a total of 1,892 Covid-19 patients had recovered and been discharged from hospital. There have been 35 deaths, most of them being the elderly with serious underlying diseases.

At present, as many as 60,693 people who had close contact with Covid-19 patients or returned from virus-hit areas are being monitored at hospitals, quarantine facilities, and at home.

The Hanoitimes – Dramatic drops in arrivals were seen in major markets such as China, South Korea, Japan, Taiwan (China), Europe and the US.

Vietnam welcomed nearly 3.8 million international visitors in the first seven months of 2020, a drop of 61.6% over the same period last year as the country keeps its borders closed to foreigners to contain Covid-19.

Some 13,900 foreigners have arrived in Vietnam in July, increasing 58.7% from June but plummeted 98.9% year-on-year, according to the latest report from the General Statistics Office.

The central government has only authorized some repatriation flights to bring Vietnamese citizens home. Foreigners are allowed to enter in some exceptional cases such as expats, diplomats, business executives and highly-skilled laborers.

Dramatic drops were seen in major markets such as China, South Korea, Japan, Taiwan (China), Europe and the US.

In the first seven months of this year, Asian visitors still accounted for the majority of total tourist inflows, with nearly 2.74 million, down 63.9% over the same period last year.

On July 29, the National Steering Committee for Covid-19 Prevention and Control confirmed eight new Covid-19 cases in the central city of Danang city and Quang Nam province, bringing the country’s caseload to 446, including 369 convalescents.

From July 28, the Civil Aviation Authority of Vietnam under the Ministry of Transport has stopped all air travel activities from and to Danang for 15 days.

Downtown Danang has been put under lockdown, including three hospitals from July 28.

The People’s Committees of Phu Yen and Quang Nam have decided to temporarily shut down tourist destinations from July 29 in a bid to curb the Covid-19 spread.

All the new cases tested positive for the virus after having come into close contact with COVID-19 patients, the ministry said in its 06.00hrs update.

Hai Duong set up a medical quarantine zone in Kim Dinh commune to slow the spread of the virus in the community.

The Red River delta province, a gateway to Hanoi capital, is scheduled to end social distancing measures on March 3 after the fresh outbreak was basically brought under control.

However, the provincial administration stated it will maintain the drastic measures in medium-risk areas such as Kim Thanh and Cam Giang districts and Hai Duong city.

Hai Duong is the only locality in Vietnam that has reported community cases during the past few days.

The third wave of the coronavirus, starting in late January 2021, has spread to 13 cities and provinces across the country, with 868 cases confirmed, including 676 cases in Hai Duong alone.

According to the Ministry of Health, 226 out of active cases in hospital have currently tested negative at least once.