UNICEF welcomed on Friday the government of Vietnam’s approval of the first-ever National Program on Child Online Protection for 2021-25, which aims to protect children from violence, exploitation and abuse on the Internet and support them to have safe and healthy online interactions.

“I congratulate the government for this milestone achievement,” Rana Flowers, UNICEF representative to Vietnam, was quoted as saying in a press release the same day.

“But with these opportunities can come some serious risks.”

The new national program takes into consideration the need to balance addressing risks for children with the promise that digital access is a game changer for them.

It is intended to connect them to creative ways to learn, to solve problems, to build their understanding, and to provide them with the skills they need to succeed in a digital world, Flowers said.

Addressing online abuse requires a shared commitment of the government, self-regulation by online platforms, the will of regulators but stopping it will only be successful when parents are informed and aware and children themselves empowered with information on the risks and strategies to avoid and report such abuse.

UNICEF expresses concern for children’s online safety in five key areas, including unwittingly giving too much information away that allows predators to stalk, or criminals to commit fraud; too many hours spent playing violent online games; children convinced to share sexual images of themselves by friends or predators; vulnerability to ‘grooming’ by pedophiles who pretend to be the same age; and cyberbullying and abuse.

“Because this abuse occurs online, as parents we are often not aware of the risks, and we are not informed of the online experience that our children are suffering,” Flowers said.

“For the children, it is tragically isolating.

“When bullies bully in school, others are aware, but when it happens online, the cruelty, the abuse can dramatically impact children’s mental health and confidence, leaving them feeling isolated and alone.

“We encourage parents to have a conversation with children, to identify protective strategies, and we encourage children to stand up for each other, to share kindness and protect each other from abuse.”

A recent survey by UNICEF indicates that one in five children and adolescents in Vietnam has fallen victim to cyberbullying and harassment from peers, yet, three quarters are not aware where to seek help.

There is a growing number of cases reported in Vietnam of child sex offenders and traffickers, predominantly men, using the Internet and mobile phones to groom, entice, and blackmail children into subsequent exploitative situations.

For children who are online, little has been done to protect them from the perils of this abuse of the digital world or to increase their access to safe online content.

Under this new program, the Vietnamese government will work hand in hand with the ICT industry to keep up with the pace of change and to protect children from the new risks and harm they are exposed to and ensure that the Internet stays safe for them.

The private sector is encouraged to bring in different expertise, experiences, understandings, solutions, and opportunities to protect children online.

The program also aims to empower children and young people, as the central part of the solutions, to take advantage of the great opportunities the digital world offers, while equipping them with knowledge and skills to self-identify and be able to protect themselves when in cyberspace.

It sees a key role for parents, caregivers, and teachers in providing guidance and support to young people for safe and healthy online interactions.

With this program, the government is committed to developing laws, policies, practices, and products that can help children harness digital opportunities and protect them from harm. 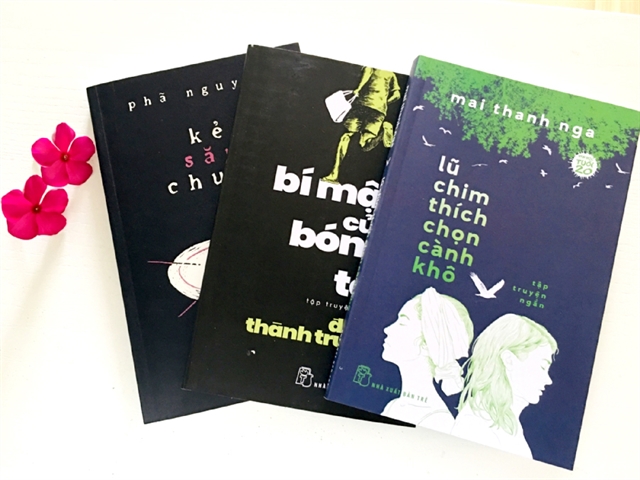 Books by young writers in HCM City recently issued by Trẻ (Youth) Publishing House, one of the country’s leading publishers, are leaving an impression on young readers.

Kẻ Săn Chuột (The Hunter) is the first work by Phá Nguyện, who owns a small coffee shop in District 8.

The novel is about a group of poor children living in an alley in the city. It portrays a young disabled man who discovers the world by making friends with poor kids.

In the book, the culture and lifestyle of the HCM City residents are highlighted.

The writer’s words evoke the reader’s imagination about the city, the locals and their daily life. The city’s culture and lifestyle are seen as beautiful and peaceful.

In his mid-twenties, Nguyện believes writing is “not my career but my endless dream”.

“Writing makes me happier. It helps me to share my mind and views to readers. It also brings new friends to me,” said Nguyện, at his book signing ceremony organised by the publisher on May 22. 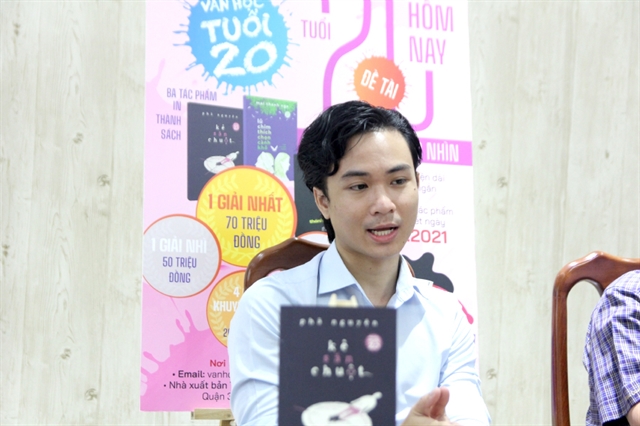 His work, Kẻ Săn Chuột , was selected among 20 works in different categories of short stories, fiction and poems to go to the final round in April. These best works will be published in books, magazines and newspapers.

According to Dương Thành Truyền, director of Trẻ Publishing House, the publisher was not sure that the books would be successful but knew that young readers would find it attractive.

“We have helped young writers introduce their art to readers. We know they work hard and hope they take the market by storm,” he said. 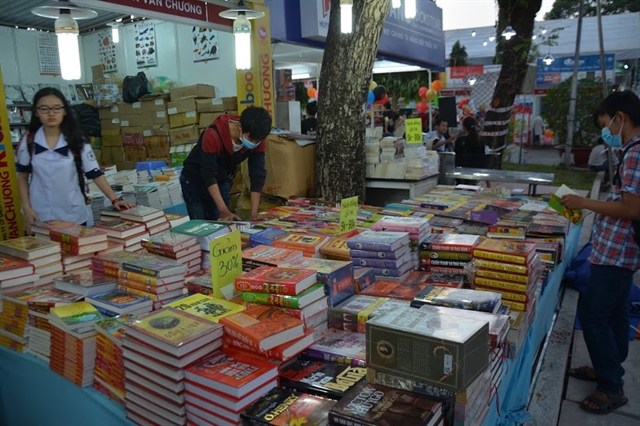 According to a report from two book-selling websites, Tikiweb and Vinabook, books by young writers, including Nguyệt Phạm and Trương Anh Quốc, have all been best-sellers in recent years.

Phạm’s collection of poems, Phơi Riêng Tư (Face Off), released last year, has attracted both readers and critics.  Her work captures the beauty of life, love and women.

“Young writers add something new that they have gained from their experiences to a market dominated by traditional writing styles,” veteran poet Hữu Việt of the Việt Nam Writers’ Association, a member of the contest’s organising board, said. 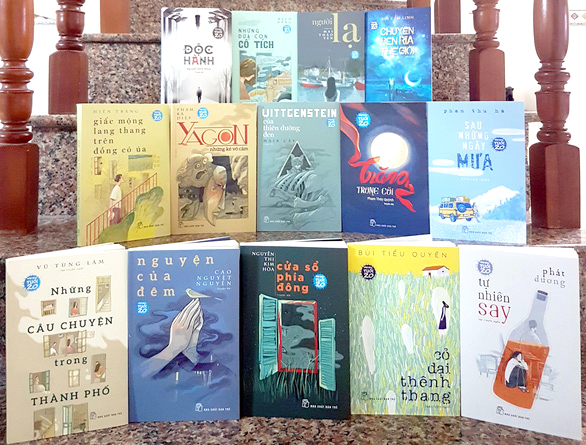 Many past winners of writing contests launched by organisations, such as the HCM City Writers’ Association, Trẻ (Youth) Publishing House and Kim Đồng Publishing House, have become popular among readers. Photo courtesy of the publisher

Việt’s association launched a writing contest for authors under 35 years old in May as part of an effort to discover and support young talents.

The 2021 National Writing Awards for Young Writers will offer prizes in the categories of poetry, fiction, literary criticism and translation.

Vietnamese writers at home and abroad are invited to participate in the event.

The organiser seeks works with themes about the lives of young people and their challenges and dreams in a globalised world. Women and children living in remote areas are also included.

Famous authors, poets and translators will be part of the jury.

“We hope our contest will give writers under 35, particularly those from ethnic minorities, a chance to develop their careers and bring writers and publishers together to offer new, quality books to readers,” said Việt.

Entries should be postmarked by September 30.

The best works will be published by leading publishers, magazines and newspapers. The prize winners will be announced in early 2022.  VNS

Vietnam is enjoying a golden population structure, the most balanced development stage of each country when the proportion of the labour force is double the number of dependents. 75 per cent of the population is of working age, making a crucial contribution to driving Vietnam’s GDP growth – the fastest in Southeast Asia. However, this optimism will not last for long. From 2040, Vietnam will transition into an undesirable stage: a period of the ageing population.

Meanwhile, concerns are rising as the majority of people are unprepared for the risk of population ageing. A survey conducted by Prudential Vietnam on 500 people in the 30-45 age bracket in Ho Chi Minh City and Hanoi revealed that only four out of 10 respondents are confident of being financially independent in their old age. “The Prudential survey reflects the current social picture. Our goal is to change the perception among the community so that anyone can start preparing for independent seniority,” said Phuong Tien Minh, CEO of Prudential Vietnam.

Putting the situation of an ageing population in the context of low per capita income, Le Van Thanh, Deputy Minister of Labour, War Invalids and Social Affairs, identified the risk of many Vietnamese people “growing old before becoming rich”.

Where are the senior citizens in the big picture?

The expansion of urban areas has attracted a wave of young migrants seeking jobs, leaving behind nearly 30 per cent of senior citizens living alone in rural areas. Nguyen Xuan Truong, director general of Population Structure and Quality said that 70 per cent of old adults in Vietnam are making their own living with the offspring’s support; only 25.5 per cent of them live on pensions and social benefits.

Dr. Giang Thanh Long, associate professor of the National Economics University, also estimated that the current government’s support policies only cover about 8 per cent of the senior group. Meanwhile, it is forecast that by 2049, the medical needs of this group will increase by 2.5 times compared to today. Consequently, when Vietnam enters the aging population period, it will not only place many financial pressures on the young generation but also create a burden on social security.

According to Dr. Long, many developed countries have successfully prepared for their aging population period based on three pillars: economic, health, and social preparedness. He said that insurance organisations, banks, and the like should be encouraged to actively participate in the provision of life insurance-related services. This diversity not only supports middle-income earners and above but also creates income safety nets and protects the health of low-income people.

CEO Minh of Prudential Vietnam said that an aging population is a challenge. While governors must resolve the macro problem, everyone can actively participate by preparing a personal financial plan. “People have different perceptions of finance per life stage. The earlier you prepare, the easier it is to achieve financial freedom and independent seniority,” said Minh.