HÀ NỘI — Việt Nam will send an 11-strong contingent to the Tokyo Paralympics this summer.

The athletes include three who will compete in track-and-field, four in swimming and three in powerlifting.

The Paralympians are currently in intensive training in HCM City and Đà Nẵng. They are expected to have both shots of the COVID-19 vaccine 10 days before leaving for Tokyo on August 18.

They must have PCR tests with negative results within 72 hours upon their arrival.

According to the deputy head of Việt Nam Sports Administration (VSA) Nguyễn Hồng Minh, no specific targets have been set for the athletes.

“There have been no international training camps and competition for athletes in the last two years. Our athletes are aged (from 35 to 40) and one of them is still in injury treatment so their performance would not be as good as it was in 2016 in Brazil,” said Minh, who is also the team’s chef de mission.

“However, we still expect to see good results from them,” he said.

“We receive good care from the sports officials and support from enterprises. These would be strong pushes for us to earn high results in Tokyo,” said Công. VNS

HÀ NỘI — A 71-year-old woman with a range of underlying health issues from the southern province of An Giang has become Việt Nam’s 62nd COVID-19 related death.

The treatment subcommittee of the National Steering Committee for COVID-19 Prevention and Control on Friday announced the passing of COVID-19 patient No 8,217 in Châu Thành District, An Giang Province.

The woman had contracted pneumonia, suffered from high blood pressure and had been a type 2 diabetic for more than 10 years.

On June 2, the woman returned from Cambodia to Việt Nam together with her daughter and grandchild via the Mộc Bài International Border Gate in the southern province of Tây Ninh, where they were all quarantined on arrival.

After testing positive for the coronavirus two days later, she was hospitalised at Bến Cầu medical centre in a state of exhaustion and with chest pain.

Her diagnosis was pneumonia and acute respiratory distress syndrome associated with COVID-19.

On June 11, the patient was put on mechanical ventilation and received intensive care, however, due to the rapid progression of the infection, worsening respiratory failure and underlying chronic health problems, she did not respond well to treatment and died on June 14. 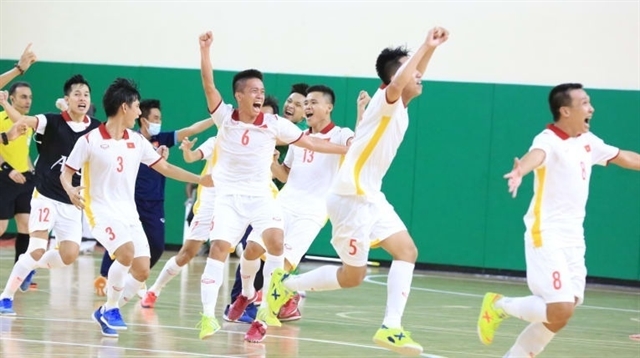 HÀ NỘI — Việt Nam earned the last Asian slot for this year’s Futsal World Cup after a 1-1 draw against Lebanon in their second leg playoff tie on Tuesday.

The aggregate score of 1-1 after two matches sent the Southeast Asian side to their second World Cup on away goals.

The second leg was a cagey, defensive affair, much like the first, though both teams had several good early opportunities but were unable to find the net.

Châu Đoàn Phát finally broke the deadlock in the 37th minute, dribbling past Ahmad Kheir El Dine before putting the ball through the legs of goalkeeper Hussein Hamdani.

Lebanon immediately focused on attacking, sending on Ali Tneich as their fifth attacking player. Tneich needed only 30 seconds to level the match with a simple close-range tap in.

The three final minutes was a nervous period for Việt Nam but they held firm in defence to seal their ticket despite Lebanon’s best efforts.

In the other playoff, Thailand beat Iraq 14-2 over the two legs to qualify.

The two ASEAN teams join Iran, Japan, Uzbekistan and Thailand in the finals, scheduled to kick off on September 12 in Lithuania. VNS 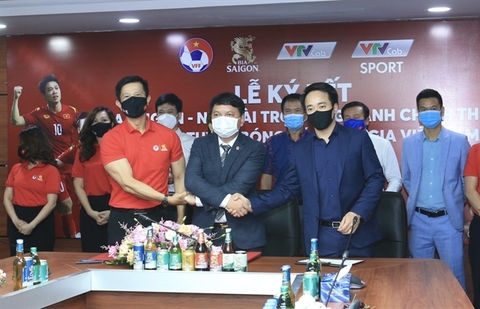 The Saigon Beer-Alcohol-Beverage Corporation (SABECO) has agreed a deal to sponsor the Viet Nam national football teams for one year.

As part of its sponsorship, running from June 2021 to June 2022, SABECO will be the exclusive sponsor in the beer industry of the men’s and women’s national teams, and the U22, U23 and Olympic squads for both national and international competitions.

“We are proud to support the national football teams in their journey towards greater success and share their goal of bringing glory to the country,” said Bennett Neo, SABECO General Director.

Over the last few years, the Vietnamese national football team has seen tremendous success in various international competitions. Most recently, the team advanced to the third round of World Cup qualifiers for the first time in history.

“We are happy to partner with such a prominent Vietnamese brand such as Saigon Beer,” said Le Hoai Anh, VFF General Secretary.

“This partnership will bring further support to and motivation for, our players, and help in the development of Vietnamese football as a whole.”

Meanwhile Bui Huy Nam, General Director of VTVCab, shared: “VTVcab is proud to be the only cable TV that produces and broadcasts all worldwide and national most-watched sports leagues, as well as all matches involving Vietnamese national teams.

“Aside from content distribution across a multitude of platforms, VTVcab confirms its significant interest in football, paving the way for VFF to become a long-term strategic partner. It is an honour to walk with SABECO as a supporting partner in order to maximise the media’s effect in support of the Vietnamese national football team’s achievement.” — VNS

At the reception for Ambassador of New Zealand Tredene Cherie Dobson, President Phúc said he hoped that the ambassador would raise initiatives to promote future cooperation between the two countries, especially when the bilateral relationship was developing intensively and extensively in the spirit of the strategic partnership.

He called on New Zealand to share its experience in COVID-19 combat, and suggested the two sides step up high-level visits after the pandemic is controlled.

Việt Nam also wished to tighten coordination with New Zealand and relevant parties in realising the Comprehensive and Progressive Agreement for Trans-Pacific Partnership (CPTPP) and accelerating the ratification and implementation of the Regional Comprehensive Economic Partnership (RCEP) in the coming time, he added.

The ambassador pledged to make every effort to contribute to strengthening the bilateral relations, and support Vietnamese firms to access the New Zealand market.

The President called for joint efforts to press ahead with negotiations of a free trade agreement between Việt Nam and the Southern Common Market (Mercosur), and suggested both sides maintain their mutual support and cooperation at multilateral forums.

The ambassador said he hoped to coordinate with Vietnamese agencies to elevate the bilateral ties to a new level. 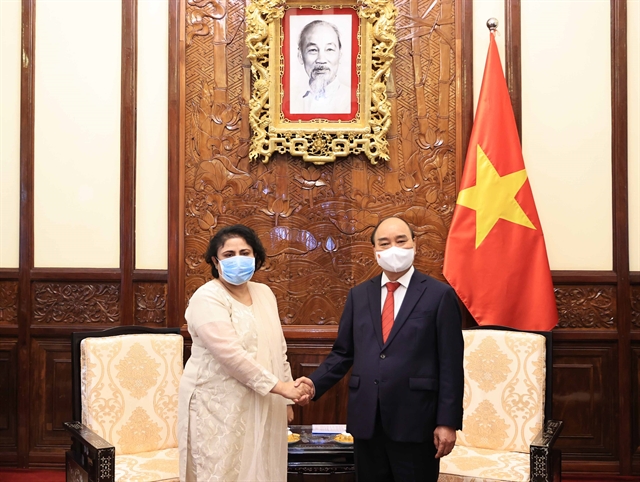 At a meeting with Pakistani Ambassador Samina Mehtab, the State leader expressed his hope that the diplomat would have measures to forge economic and trade ties between the two sides.

Việt Nam and Pakistan should optimise their strengths and beef up cooperation in trade, while tightening their collaboration at regional and multilateral forums, the President suggested.

Mehtab said she hoped that Việt Nam would serve as a bridge between Pakistan and ASEAN, and the sides would intensify tourism cooperation. 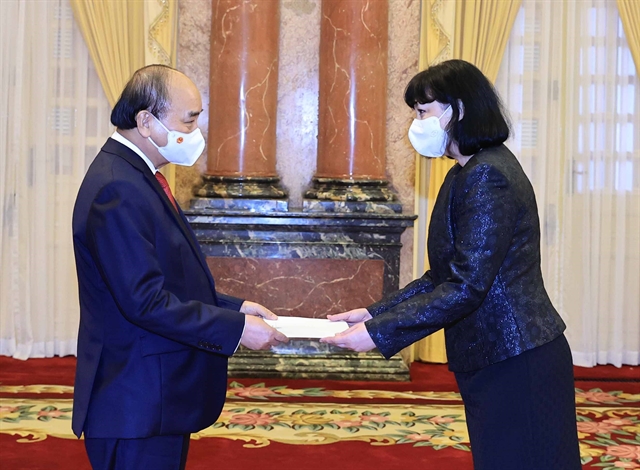 Phúc asked the ambassador to convey his invitation to the Romanian President to visit Việt Nam at an appropriate time.

Ambassador Romila, in reply, said that Việt Nam remained Romania’s important partner, and congratulated the Southeast Asian nation on its achievements in the fight against the pandemic. — VNS

Nearly seven years ago, on December 11, 2014, the United Nations General Assembly declared June 21 would be celebrated as the International Day of Yoga every year. The declaration came after the call for the adoption of June 21 as International Day of Yoga by Prime Minister Narendra Modi during his address at the UN General Assembly on September 27, 2014, when he stated: “Yoga is an invaluable gift of India’s ancient tradition. It embodies unity of mind and body; thought and action; restraint and fulfilment; harmony between humankind and nature; a holistic approach to health and wellbeing.”

Every year since then, the Embassy of India has held International Day of Yoga celebrations in Việt Nam in close co-operation with local governments and various socio-cultural organisations. It is heartening to see the popularity of yoga today across the length and breadth of Việt Nam. Last year, thanks to the successful containment of COVID-19 in Việt Nam, we worked with the provincial authorities of Quảng Ninh Province to hold an impressive event on the shores of the UNESCO cultural heritage site at Hạ Long Bay. This year, due to the constraints brought by the complex development of the COVID-19 situation, we will be observing the 7th International Day of Yoga using a virtual platform. 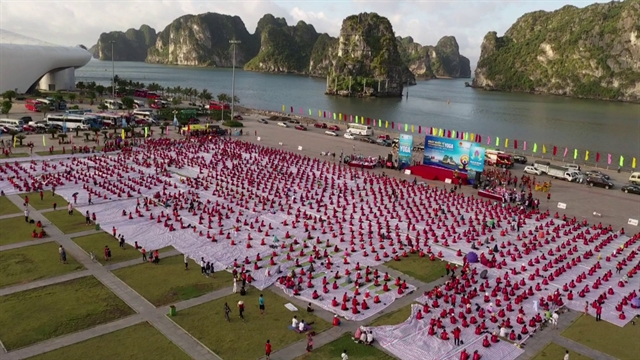 A gift of ancient India to the world, yoga has become a way of life for millions across the world, including in Việt Nam. Literally, the word ‘yoga’ means ‘to unite’. Indeed, yoga symbolises our mutual affinity and a strong bond connecting the entire humanity in the shared pursuit of wellbeing and happiness. Yoga also helps create harmony between humankind and nature. Today, when the world is facing the onslaught of the COVID-19 pandemic, yoga has become even more relevant – by helping us maintain a healthy regimen and boosting our immunity and sense of balance in these extraordinary times.

In a message sent to Prime Minister Phạm Minh Chính on the occasion of the International Day of Yoga this year, Prime Minister Modi underlined yoga’s inherent power to connect humanity and highlighted the special relevance of this year’s theme for the International Day of Yoga – ‘Yoga for Wellness’ – in the current context of the COVID-19 pandemic. This theme reflects the collective concern for the good health and wellbeing of people across the globe as well as our endeavour to ensure that we focus on both fitness and wellness.

By celebrating the International Day of Yoga on June 21 – from our homes and with our friends and families – let us celebrate our common humanity and contribute to the global healing process. Let us embrace yoga to make wellness a part of our lives.

To celebrate the 7th International Day of Yoga, the Indian Embassy’s Swami Vivekananda Cultural Centre will hold a series of virtual Yoga sessions in association with various partner organisations in Việt Nam during June 19-27.

These include the Việt Nam Buddhist Sangha, Việt Nam-Indian Friendship Association of Hà Nội, Centre for India Studies at the Ho Chi Minh National Academy of Politics, the Việt Nam Institute of Indian and Southwest Asian Studies (VIISAS) at the Việt Nam Academy of Social Sciences, and the Indian Business Chamber (INCHAM) in Hà Nội.

In the run-up to the IDY 2021, Swami Vivekananda Cultural Centre has also been organising a series of virtual yoga demonstration classes and lecture series on the benefits of yoga in the current context.  In addition, the Cultural Centre is also organising an online yoga quiz for yoga enthusiasts. VNS