TOKYO — JCR Pharmaceuticals Co said on Thursday it would build a new plant in Japan to expand production of ingredients for COVID-19 vaccines over the longer term.

JCR Pharma along with Daiichi Sankyo Co and other Japanese partners are cooperating to produce and distribute the COVID-19 vaccine developed by AstraZeneca Plc and Oxford University. The Japanese government has arranged to buy 120 million doses of the vaccine, which was submitted to domestic regulators for approval on Feb. 5.

JCR Pharma said in a statement that it has been making bulk substances for the vaccine at an existing plant but will build another one to comply with government requirements.

The Japanese drugmaker signed a contract in December to make substances for the AstraZeneca vaccine. But as a condition for a government grant to reinforce the country’s vaccine production capability through 2030, it needed to build another facility.

JCR said it will spend about 11.6 billion yen ($108.28 million) to build the facility in Kobe City, western Japan, with construction due to start in July and finish by October 2022.

The AstraZeneca vaccine is a critical component in Japan’s inoculation plan, as the doses will be made mostly in the country, and don’t need to be stored at the ultra-cold temperatures required for Pfizer Inc’s COVID-19 vaccine.

Japan kicked off its COVID-19 inoculation campaign in the middle of February using Pfizer’s vaccine, the first to be approved by Japanese regulators. But the Pfizer doses have been imported from European factories and are in short supply.

Local media has reported that Moderna Inc will file for approval of its vaccine as early as Friday via its Japanese partner Takeda Pharmaceutical Co.

The Hanoitimes – The strain is a subtype of the influenza A virus that causes flu-like symptoms in wild birds and poultry.

The United Nations Food and Agriculture Organization (FAO) and the World Health Organization (WHO) have warned Vietnam to keep vigilant after confirmation of seven farm workers infected with the influenza A (H5N8), the Ministry of Health said on March 3.

Russian authorities have reported seven farm workers in a chicken farm in the country, aged 29 to 60 years, infected with the H5N8 strain of avian flu, WHO stated.

This is the first report of H5N8 poultry-to-human infection even though the virus has been circulating in poultry and wild birds since 2016, WHO said, adding that all the seven human cases were asymptomatic.

Thus, there was no evidence of human-to-human transmission of avian influenza H5N8, and the risk of an outbreak among humans remains very low, WHO concluded.

The strain is a subtype of the influenza A virus that causes flu-like symptoms in wild birds and poultry. Outbreaks of the H5N8 strain have been reported in Russia, Europe, China, the Middle East, and North Africa in recent months.

In Vietnam, the Department of Animal Health (DAH) under the Ministry of Agriculture and Rural Development (MARD) has never detected H5N8 virus in their surveillance systems. The DAH will increase testing for H5N8 virus in the national avian influenza surveillance program starting from 2021.

The bird flu infections in humans have been associated with direct contact with infected live or dead poultry.

Dr. Satoko Otsu, a team leader of WHO Health Emergency Program in Vietnam stressed that although the risk of human infection of this specific strain of avian influenza A(H5N8) in Vietnam is very low, local residents should remain vigilant and continue to practice personal protective measures against avian flu. 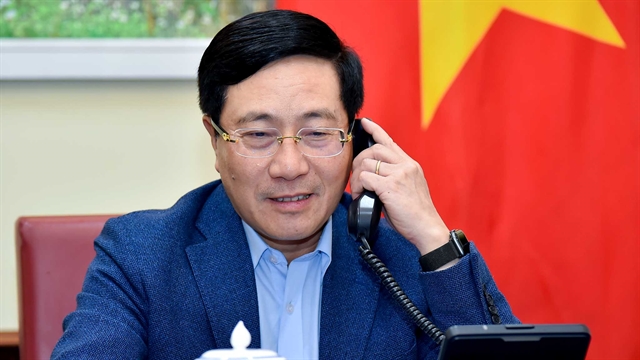 They shared solutions to increase trade exchanges and economic recovery after the COVID-19 pandemic, and create favourable conditions for travelling.

They also talked about vaccination plans against COVID-19 and the possibility to apply a vaccine passport.

He proposed the two sides to continue promoting exchanges of high-ranking delegations at all levels at the appropriate time.

He said he hoped Singapore will cooperate and support Việt Nam to get access to safe and effective sources of vaccines.

Singaporean Foreign Minister Vivian congratulated Việt Nam for its successful organisation of the 13th National Party Congress and for achievements in keeping COVID-19 under control as well as socio-economic development.

He said Singapore attached great importance to the cooperation with Việt Nam, particularly during complicated times both regionally and globally.

He shared Singapore’s experience about the “Changi connection” initiative to create conditions to allow international business people to meet at Changi Airport.

Singapore was willing to create favourable conditions for Vietnamese people to transit in Singapore on their way home to Việt Nam, he said.

The two sides also discussed regional and international issues of common issues, including the Myanmar situation. They said they wished the situation in Myanmar would be soon stabilised for peace and cooperation in the region. They agreed to continue joining ASEAN’s common efforts to contributing to finding solutions for the Myanmar issue. — VNS 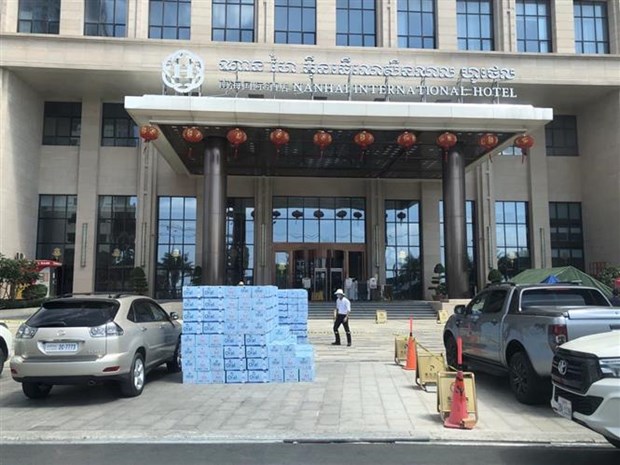 The Vietnamese Consulate General in Preah Sihanouk has called on Vietnamese-Cambodians and Vietnamese people working in the province to be cautious given the local spread of the COVID-19 pandemic (Photo: VNA)

Phnom Penh (VNA) – The Vietnamese Consulate General in Preah Sihanouk has called on Vietnamese-Cambodians and Vietnamese people working in the province to be cautious given the local spread of the COVID-19 pandemic, while following prevention and control measures set by authorities, in particular reducing travel in the current context.

The Consulate General has also suggested relevant agencies in the province provide the best care for Vietnamese citizens who tested positive to the coronavirus SARS-CoV-2 in the locality.

When help is required, Vietnamese-Cambodians and Vietnamese citizens in Preah Sihanouk can contact the Consulate General via its consular service hotline on 0882 248 888 or the overseas Vietnamese affairs hotline on 0977 988 666.

Cambodian Prime Minister Samdech Techo Hun Sen on the night of March 3 instructed competent authorities to stop people’s movement out of Preah Sihanouk in order to prevent the spread of COVID-19 to other provinces, according to the Khmer Times.

He also advised boosting vaccinations in the coastal province, underlining that more vaccines, both Sinopharm and AstraZeneca, would be sent there on March 4.