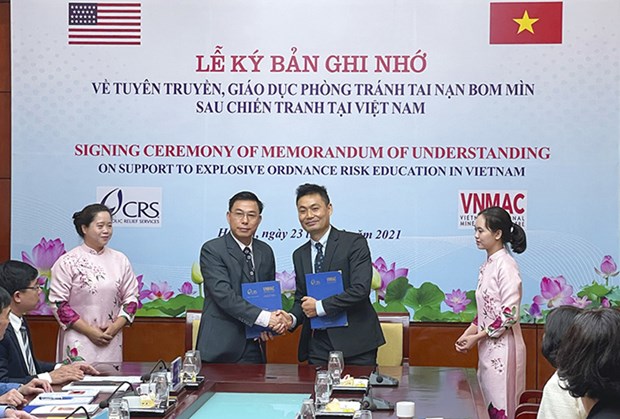 Representatives of the Vietnam National Mine Action Centre and the Catholic Relief Services Vietnam sign the MoU on March 23 (Photo: mod.gov.vn)

At the signing ceremony in Hanoi, Major General Tran Trung Hoa, Commander of the Engineering Arms of the Vietnam People’s Army and VNMAC General Director, said apart from unexploded ordnance (UXO) detection and clearance, communications and education are also one of the importance pillars of the UXO settlement.

These activities have received attention from the Government and involved ministries, sectors, central agencies, localities, as well as many international organisations, he noted.

Under the MoU, CRS Vietnam pledged to provide technical and financial aid for VNMAC to build a national strategy for UXO risk education and set up the national standards on the education and those on support for UXO victims.

This project, which will last through July 2024, will help improve VNMAC staff’s capacity and support related communications and education activities carried out by the centre.

According to VNMAC, there are about 800,000 tonnes of UXO left from wartime nationwide, with nearly 6.1 million ha of land contaminated or suspected to be contaminated, accounting for 18.71 percent of Vietnam’s total area.

Since 1975, UXO has killed more than 40,000 people and injured 60,000 others, most of whom are breadwinners of their families, ethnic minority people, and children./.

VNA
The central province of Quang Tri is striving to, by 2025, become the first province in Vietnam to be safe from unexploded ordnances (UXO) left over by the war. Over 740,700 bombs, mines and other ordnances have been found and detonated in Quang Tri. (Photo: VNA)

The locality has, starting from 1995, had success in the mobilisation of aid from international and non-governmental organisations to deal with the deadly legacy of war.


It is the most polluted locality in terms of UXOs which are scattered over 81 percent of its land area, and have killed over 3,430 people and injured 5,100 so far during peace-time.

Over the last 26 years, it has mobilised nearly 144 million USD from international and non-governmental organisations to help it mark off more than 446 million sq.m of land contaminated with cluster bombs and treat around 86 million sq.m of this kind of land.

Over 740,700 bombs, mines and other ordnances have been found and detonated, while tens of thousands of locals have received support in livelihoods.

2018 was the first year Quang Tri reported no accidents from bombs and mines.

Since 1995, US non-governmental organisations have assisted Quang Tri in seeking resources for the implementation of relevant programmes and projects, and helped bomb and mine victims with tens of millions of US dollars.

The US’s Peace Trees Vietnam is the first foreign non-governmental organisation licensed by the Vietnamese Government to operate in UXO search and clearance.

Thanks to the support from US non-governmental organisations, Quang Tri has detoxified some 187 million sq.m of land and deactivated hundreds of thousands of shells.

Assistance has also come for the training of technicians of international standard, the application of cutting-edge technologies in bomb and mine clearance, and the creation of jobs for nearly 900 local people.

RENEW is a cooperative programme between Quang Tri and foreign NGOs to restore the environment and address the consequences of war, especially UXOs. The main foreign partner in the programme now is the Norwegian People’s Aid (NPA).

Quang Tri aims to clear about 3,000 ha of contaminated land and mobilise 10 million USD each year for the task during the 2021-2025 period, and announce dangerous areas to the public.

Also each year, up to 60,000 people can access education programmes on bombs and mines, and 1,300-1,500 victims and their families are expected to receive support in healthcare and livelihood development.

By 2025, all local schools will include bomb and mine education in their curricular.

Quang Tri is set to develop its provincial bomb and mine action centre into a regional one with multiple activities, said Nguyen Trieu Thuong, Director of the provincial Department of External Affairs and deputy head of the standing board of the provincial steering committee for the settlement of UXO./.

International donors and non-governmental organisations have supported Vietnam in UXO clearance and assisted bomb and mine victims.

“Vietnam has been a tremendous partner for the U.S. when it comes to addressing legacies of war, not just, obviously, the unexploded ordnance issue, but also the issues of those who’ve been missing in action as well as dioxin and Agent Orange,” Jerry Guilbert, chief of Programs for Weapons Removal and Abatement under the U.S. Department of State, told a press conference Tuesday.

Guilbert said one of the greatest accomplishments in Vietnam-U.S. cooperation in dealing with war legacies is the fact that there have been no deaths from unexploded ordnance in Quang Tri Province for the past few years.

He also praised the efforts of provincial authorities in pioneering many new and innovative technologies and techniques for addressing UXOs.

“We’re actually on track to making Quang Tri free from the impact of UXOs by the end of 2025,” Guilbert stressed, adding the central province was the most heavily contaminated by UXO in all of Vietnam.

Between 2014 and 2019, the province had attracted $100 million in foreign non-governmental aid, receiving an average 38 new projects a year. It has cooperated with 67 foreign NGOs and international organizations from countries like Ireland, South Korea, the U.K. and U.S.

A total 391,000 hectares of provincial land, accounting for 83.3 percent of its total area, remains infested with mines and other explosives from the war, according to official statistics.

According to Quang Tri’s Legacy of War Coordination Center, 8,540 people in the province have fallen victims to UXOs since 1975, with 3,431 fatalities. Many were collecting scrap when detonating an explosive.

Upon addressing the UN Security Council’s teleconference on March 24 regarding the Libyan situation and operations of the UN Support Mission in Libya (UNSMIL), the Vietnamese diplomat hailed major progress made in terms of politics and security in the North African country.

He therefore called on all parties involved to fully abide by the articles stated within the ceasefire agreement and to do their utmost to facilitate the transitional period such as making all necessary preparations to hold upcoming national elections based on the agreed roadmap.

He stated his appreciation for the efforts put in by parties in Libya in relation to bomb, mine and unexploded ordnance (UXO) clearance through the support of the UN Mine Action Service (UNMAS), adding that greater efforts should be made to reduce risks and to protect civilians from dangers posed by post-war UXO.

The contest was organized at the center’s webpage for all Vietnamese people, except for those who are working for organizations majoring in overcoming post-war bombs, mines and toxic chemicals in Vietnam.

People can learn more about the contest at http://vnmac.gov.vn/ or at http://cuocthi.vnmac.vn/.

After signing up to the contest, each contestant will watch a video clip and answer five multiple-choice questions in 15 minutes. Then they will guess the number of participants before submitting their answers to the center.