At its annual general meeting Saturday, it also announced a revenue target of VND21 trillion, up 20 percent.

But Phu Hung Securities Corporation has forecast revenues of VND18.4 trillion and profits of VND1.09 trillion, explaining that the volatility in gold prices and consumers’ increasing preference for imported jewelry would keep numbers down.

BSC Securities expected the jewelry industry to recover this year, and forecast PNJ a 22 percent rise in profits to VND1.3 trillion on revenues of VND19.8 trillion (up 13 percent).

PNJ chairwoman Cao Thi Ngoc Dung said the targets are achievable since the pandemic would be contained this year and the economy would recover.

The company aims to open 40-45 stores in 2021 and buy machinery for its jewelry workshops.

Its CEO, Le Tri Thong, said demand for jewelry among young people in major cities is high, and this would boost the company’s revenues and profits. Smaller cities and rural areas too however show promise, he said.

Last year, revenues edged up 3 percent to VND17.5 trillion, but Thong pointed out though the growth was lower than the average of 32 percent in recent years, the fact that PNJ managed to grow its revenues amid the pandemic was a success for it.

It opened 29 stores and closed 36 existing ones in 2020, most of them were silver jewelry stores in shopping malls with modest business and high rentals. 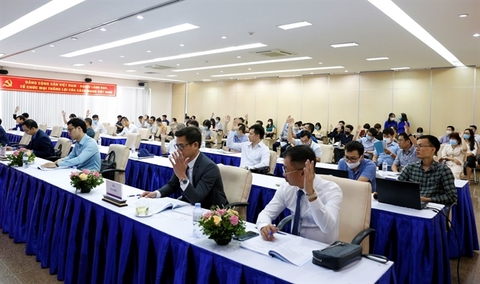 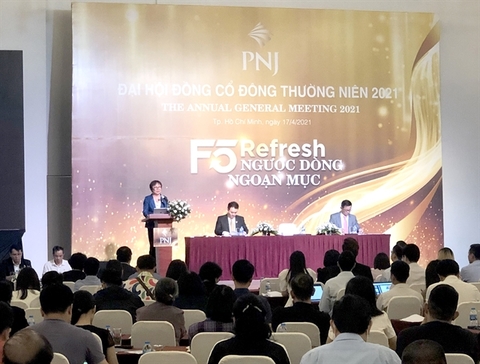 Cao Thi Ngoc Dung, chairwoman of PNJ, talks about the company’s plans for this year at its annual general meeting of shareholders held in HCM City on April 17. — VNS Photo

Phu Nhuan Jewelry Joint Stock Company (PNJ) targets net revenues of more than VND21 trillion (US$910.09 million) and net profits of VND1.23 trillion ($53.3 million) this year, up 20 per cent and 15 per cent from last year, its chairwoman, Cao Thi Ngoc Dung, has said.

It plans to achieve this by improving its autonomous supply chain, quickly expanding its retail network, optimising all its stores, reducing costs, and improving the customer experience and market forecast.

It also plans to invest further in technology.

The company held its annual general meeting of shareholders in HCM City on Saturday, and shareholders approved a number of targets and plans for 2021, including a private placement of 15 million shares at VND10,000 per share, equivalent to 6.6 per cent of its outstanding shares, to raise its charter capital from VND2.276 trillion ($98.6 million) to VND 2.426 trillion ($105.1 million).

The fund raised will be used to strengthen jewellery production capacity, improve production technologies and product designs, expand the retail network, and speed up digital transformation.

Shareholders also approved the issuance of more than 3.4 million shares at VND10,000 per share to employees who have made outstanding contributions.

Talking about the company’s vision for this decade, Dung said: “PNJ aims to become the leading jewellery production and retail company in Asia.”

Le Tri Thong, the company’s CEO, said despite difficulties last year due to the prolonged COVID-19 pandemic, PNJ grew net revenues by 21 per cent to over VND17.5 trillion and profit after tax by 28 per cent to VND 1.07 trillion.

According to Forbes Vietnam, the brand value of PNJ climbed by $15.5 million last year to $94.1 million, rising three places to 21st in the country and remaining at the top of the personal consumer goods industry. — VNS