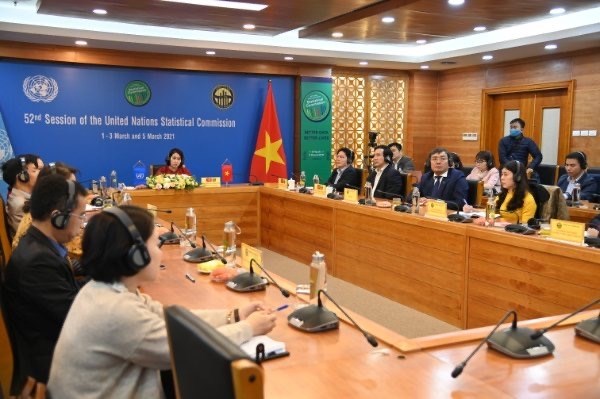 Hanoi (VNA) – A report on national accounts was among the items presented by the General Statistics Office of Vietnam (GSO) at the ongoing 52nd session of the United Nations Statistical Commission (UNSC), GSO Director General Nguyen Thi Huong said.

According to Huong, the GSO has initially applied the System of National Accounts 2008 (2008 SNA), which is the latest version of the SNA adopted by the commission. This year, the office will implement a series of activities on national accounts, including the issuance of a guidebook on the classification of institutional sectors applicable to Vietnam’s statistics sector.

At the session, the GSO is also set to deliver a presentation concerning a report on the UN Committee of Experts on Business and Trade Statistics.

Huong said Vietnam supports orientations for changes to the manual on international merchandise trade statistics. The country requests the UN soon send its detailed plan for such changes to member nations and develop a related questionnaire to collect feedback.

Besides, the the GSO is also set to have a presentation to the high-level group for partnership , coordination and capacity-building regarding statistics for the 2030 Agenda for Sustainable Development.

Founded in 1947, the Statistical Commission consists of 24 UN member countries elected by the UN Economic and Social Council on the basis of equitable geographical distribution.

Due to the COVID-19 pandemic, this 52nd session is being held in a scaled-down virtual format, consisting of four two-hour informal meetings from March 1 to 3 and on March 5./.