Third wave of the

Minister of Health Nguyen Thanh Long has said he is afraid that Vietnam is likely to be confronted with another wave of the novel coronavirus (COVID-19) unless anti-coronavirus measures are tightened. 
Long issued the warning during a meeting in Hanoi on March 26 after the Ministry of Health confirmed two fresh coronavirus infections earlier the same day.

Both patients, with one in HCM City and the other in Hai Phong, had tested positive for the SARS-CoV-2 virus after illegally entering Vietnam from Cambodia.

“I am worried about a possible new outbreak of the disease in Vietnam because the COVID-19 pandemic remains complicated in the region,” Long told the meeting.

According to the Health Minister, since the initial outbreak of the virus the country has deployed 10,000 border guards working around the clock across 1,600 checkpoints to manage illegal entry and exit activities.

However, Vietnam has long and wide border lines, making it very challenging to fully manage illegal movement, said the minister.

Statistics show large numbers of people have been found illegally entering Vietnam through unmanned paths and trails, exposing the country to higher risks of community transmission.

The minister warned that the risk of infection remains high in the community as the source of many cases remains unknown, with several cases showing no signs of any symptoms.

Due to this latest development, the minister stressed that the pandemic could break out again at any time. He called on various ministries, agencies, and localities to strictly abide by the PM’s instructions on COVID-19 prevention and control.

Prevention and control efforts in high-risk areas must be swiftly enhanced, he said.

The third COVID-19 wave struck Vietnam in late January 2021. More than 900 infections have been confirmed in 13 cities and provinces nationwide. About 10 localities have reported no new locally transmitted cases for more than a month.

A hot low-pressure area originating from the west is heading for the nation’s northern region and is set to cause the first hot spell of this year.

The period of hot weather is due to last from March 29 and will impact the northern and the north-western regions, including Dien Bien and Son La provinces, according to the National Centre for Hydro-Meteorological Forecasting.

In Hanoi, temperatures are forecast to rise quickly from March 29 and hit 33 degrees Celsius in the middle of next week. Local people will feel hot and dry due to the impact of the latest heat wave.

Meanwhile, the centre said the current hot spell in the Central Highlands and the southern region will see temperatures fall this weekend, with showers and thunderstorms predicted to hit some places.

By late April, rainfall is predicted to be between 20 mm and 40 mm higher compared to the same period from previous years.

Over the next month the Central Highlands and the southern region will see temperatures drop by up to one degree Celsius against the same period from the past.

On average, regions may record less days in which they experience heat waves in comparison to previous years.

For the last time, Vietnam has successfully controlled the third wave of Covid-19 infection with the hotspot Hai Duong in the Northern region. 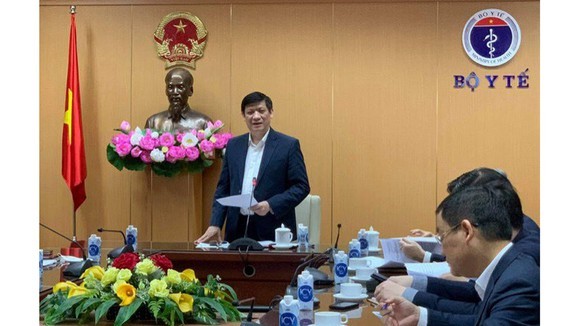 Authorities faced difficulties in managing illicit immigration by sea and on roads because Vietnam has long border line, the Minister emphasized.

In the morning of March 26, Vietnam recorded two unlawful immigrants by sea in the Mekong Delta Province of Kien Giang’s Phu Quoc Island and then moved to the Northern City of Hai Phong. The Minister requested local administrators of these localities with illegal imported cases to quickly isolate these persons.
He also ordered local authorities to implement drastic measures against Covid-19 as per the government, the Prime Minister and the National Steering Board for Covid-19 Prevention and Control’s directions on contact tracing, quarantining and treatment to curb the Covid-19 spread to the community.
Medical experts advised to increase information of the disease’s preventive measures following the complex development of Covid-19 pandemic in countries in the Asian region and in the world.
Above all, competent forces in localities with border line must prevent people from illegally entering Vietnam by all cost. Local authorities in these localities must be held accountable for illegitimate immigration. All involving in illicit immigrations must receive tough punishment according to the present regulations.
In regard to vaccination, experts in the world have been carrying out researches on more than 250 vaccine kinds but only 13 of them have been certified with total 486 million doses. Many nations have poured money into research, production and purchase of vaccine; therefore, shortage of vaccine is a global matter.
For the past time, the Ministry has tried to discuss with vaccine manufacturers in the world upon the supply of vaccine for Vietnam. Beforehand, Vietnam also cooperated with countries in research and production of vaccine. The Southeast Asian country is prepared for the human trial’s third phase but it is bumping into difficulties.
When it comes to allergic reactions after vaccination, Minister Nguyen Thanh Long noted that all types of vaccine including old to new ones have unexpectedly serious reactions and common reactions. Some of European countries decided to pause Covid-19 inoculation to re-assess; however, the European Medicines Agency announced AstraZeneca vaccine is not associated with an increased overall risk of blood clotting disorders; therefore, these countries have continued vaccination.

Toronto will cancel all in-person learning at elementary and secondary schools as of Wednesday, health authorities said as Canada deals with a variant-driven third wave of the coronavirus pandemic, which has hit the younger population hard.

Canada’s largest school district, serving around 247,000 students, will move to remote learning until April 18, with the potential to extend based on case trend data. It follows a similar move by another school board in Ontario province on Monday.

“Schools should be the first places in our community to open, and the last to close,” Toronto Public Health said in a statement on Tuesday. “Unfortunately, current circumstances require that difficult decisions must be taken locally to protect all those in our school communities.”

Prime Minister Justin Trudeau warned of a “very serious” third wave facing the country which is pushing up hospitalizations and rapidly filling up intensive care beds.

“Around the world, countries are facing a very serious third wave of this pandemic,” Trudeau told reporters in Ottawa. “And right now, so is Canada.”

Canada has averaged nearly 5,200 new coronavirus cases per day over the past week, and has recorded a total of more than a million positive tests and 23,000 deaths.

Younger Canadians are bearing the brunt of the latest increase in infections, creating growing demand for artificial lungs and a struggle to maintain staffing in critical care units as hospitals make last-ditch efforts to save patients.

Canada’s most populous province of Ontario entered a limited lockdown on Saturday, but some officials are calling for more drastic measures.

He expressed frustration at seeing people in Toronto “going into the mall, doing their little wander ‘round, and coming out with no bags,” Ford said. “That tells me they were just out for a daily jaunt. You can’t do that.”

Canadian provinces from Quebec westward to British Columbia, with the exception of Manitoba, are struggling against increases in coronavirus infections.

The federal government has delivered more than 10 million doses of coronavirus vaccines so far, and provincial health agencies are in the process of administering shots. Trudeau has said everyone among the 38 million Canadians who want to be vaccinated will be by the end of September.

BANGKOK — Thailand is considering closing entertainment venues in Bangkok and 40 provinces, its COVID-19 taskforce said on Thursday, as authorities rushed to tackle a new wave of coronavirus cases and the arrival of a highly contagious variant.

The taskforce urged the public and private sector to let employees work from home and to avoid non-essential travel, while 405 new infections were reported on Thursday in a new outbreak connected to Bangkok’s infamous nightlife.

The spike in infections comes at a tricky time for Thailand, ahead of next week’s annual Songkran festival, known for big social gatherings and notoriously crowded water fights that authorities have banned.

Adding to concerns, Thailand on Wednesday for the first time confirmed the presence locally of the highly transmissible coronavirus variant B.1.1.7 first identified in Britain.

The SARS-CoV-2 variant known as B.1.1.7 has been found in more than 100 countries and has been blamed for fuelling new waves of infections in record numbers.

Thailand plans to start its mass immunisation campaign in June but has been immunising health workers or people deemed vulnerable, with more than 300,000 recipients so far.

Thai experts are puzzled at how it evaded the country’s strict border controls and quarantine system, which has helped keep overall cases to a relatively low 30,310 and deaths at 95.

The taskforce said a change in the quarantine period introduced this month, which reduces it to seven or 10 days, instead of the mandatory 14 days, may be reconsidered.

The health ministry is seeking approval from the taskforce to close entertainment venues, including pubs and karaoke bars, for two weeks, a taskforce spokesman said, in 40 provinces and Bangkok. New cases have been reported in 20 province.

Earlier on Thursday, government spokesman Anucha Burapachaisri said entertainment spots with coronavirus cases had already been ordered closed and more categories of venues could be affected if the outbreak spreads.

SEOUL — South Korea will reimpose a ban on nightclubs, karaoke bars and other nightly entertainment facilities, authorities said on Friday, after the number of new coronavirus cases surged, fanning fears over a potential fourth wave of outbreaks.

The current 10 p.m. dining curfew and ban on gatherings of more than four people will be maintained, he said.

“Signs of a fourth wave of epidemics that we had so striven to head off are drawing nearer and becoming stronger,” Chung told a daily meeting on the pandemic.

“We will maintain the current distancing level, but actively reinforce various specific measures depending on the situation.”

The Korea Disease Control and Prevention Agency (KDCA) reported 671 new cases for Thursday, a day after the daily tally hit the highest level since early January, with clusters developing from churches, bars and gyms, mostly in the greater Seoul area.