The role of a social worker 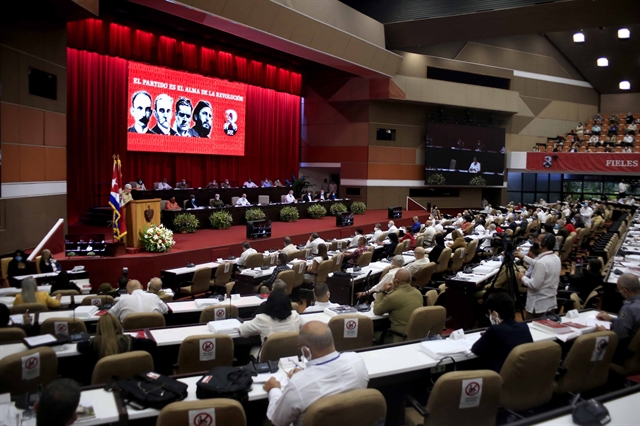 The 8th National Congress of the Communist Party of Cuba opened on April 16. — ACN/VNA Photo

The following is a translation of the message:

The Central Committee of the Communist Party of Việt Nam is delighted to extend victorious greetings and the warmest congratulations to the fraternal PCC Central Committee on the occasion of the PCC’s eighth National Congress, “the Congress of the historical continuity of the Cuban Revolution” and the eternal spirit of the Sierra Maestra, Girón and President Fidel Castro.

The eighth Congress of the PCC takes place at a time when the situations in the world and regions unfold in a very complex and unpredictable way, the COVID-19 pandemic continues to have a profound impact on all aspects of political, economic and social life of countries across the world, including Cuba and Việt Nam.

The PCC and people of Cuba have shown great efforts, will and determination to promote and step up the building of a prosperous and sustainable Socialism on the heroic island.

We warmly congratulate the Cuban brothers for the great achievements made in the implementation of the Guidelines of the Economic and Social Policy of the Party and the Revolution, as part of the Process of Updating the Economic and Social Cuban Model, approved by the sixth and reaffirmed in the seventh National Congress of the PCC.

Despite innumerable difficulties and challenges, Cuba continues to be persistent, proudly upholding the flag of “winning one hundred victories in one hundred battles”, and is the symbol of revolutionary heroism, the pure international spirit and the steadfast will of struggle, actively participating in the struggle for national independence and social progress of the peoples in Latin America and the Caribbean and of the peoples over the world.

The special relationship between Việt Nam and Cuba, in which the ties between both parties are the political base and play an important guiding role in promoting the bilateral ties, has been built and fostered by the revolutionary leaders, such as José Martí, Hồ Chí Minh, Fidel Castro and different generations of leaders from Việt Nam and Cuba. This special relationship continues to be constantly cultivated and developed in all aspects with great achievements, demonstrating the sentiment and the firm and faithful revolutionary stance of the Parties, States and people of both countries, contributing to the revolutionary causes and the construction of Socialism in each nation.

The immortal words of President Fidel Castro “For Việt Nam, we are willing to give even our own blood” will forever be the noble symbol of this sacred relationship. On this occasion, we reaffirm the consistent stance of the Party, State and people of Vietnam to continue strengthening and deepening the exemplary relationship and traditional friendship, comprehensive cooperation, faithful solidarity between the Parties, States and peoples of Việt Nam and Cuba.

Once again, we wish the eighth National Congress of the PCC a great success and we believe that our fraternal heroic PCC, together with the State and people of Cuba, will successfully implement the resolutions approved at the important meeting, obtaining even greater victories in the cause of construction and defence of the beautiful Cuban Fatherland, towards the goal of building a prosperous and sustainable Socialism.” — VNS

Construction time must not exceed 36 months from the date of land allocation, and the project’s operation duration will be 50 years from getting the approved investment proposal.

Under the decision, Long An People’s Committee was tasked to direct Long An Economic Zones Management Authority to guide the investor and ensure that the investment project and the investor’s equity contributions stay on schedule.

For its part, the committee must ensure the accuracy of information, statistics, and assessment in line with regulations, and guarantee the compatibility between the project’s implementation and approved plannings.

Earlier, via Official Letter No.1840/TTg-CN dated December 28, 2020 the PM approved the revised development planning of Long An industrial parks (IPs) to 2020, adding Long An’s three expanded IPs to the country’s IP development planning to 2020.  Accordingly, Hoa Binh IP in Thu Thua district will be expanded by 49ha, Long Hau IP in Can Giuoc district by 90ha in the second phase, and Xuyen A IP in Duc Hoa district by 177ha in the third phase.

According to Long An Economic Zones Management Authority, the province will have about 1,500ha of additional cleared land in its IPs to cash in on rising foreign direct investment (FDI) flows into Vietnam in 2021. The sectors most appealing to foreign investors are textiles and garments, footwear, animal feed, poultry, seafood, food processing, beverages, and manufacturing.

According to Nguyen Thanh Thanh,director of Long An Economic Zones Management Authority, the presence of many IPs has played a huge role in driving local socio-economic development by contributing nearly VND3.9 trillion ($169.57 million) to state coffers and creating jobs for more than 148,000 workers.

According to the latest figures from the Long An Department of Planning and Investment, as of March 20, 2021, Vietnam lured in a total $10.13 billion in total committed FDI. The province took the lead nationwide with nearly $3.2 billion, accounting for nearly 32 per cent of the country’s total FDI volume during the period.

This late March, Long An granted an investment certificate to LNG Long An I and II gas power project of Singapore’s VinaCapital GS Energy Pte., Ltd.

The project has a capacity of 3,000MW, including two combined cycle gas turbine plants that possess a capacity of 1,500MW each, with registered investment capital totalling $3.1 billion. The project is expected to begin operation in December 2025.

Also in the first quarter of 2021, Long An granted investment certificates to 10 new foreign investment projects and six others requesting leave for capital expansion.

So far, the province is home to more than 1,100 foreign investment projects worth more than $9.17 billion in total committed value, 588 of which have already come on stream.

Speaking at the Theoretical Council’s meeting in Hanoi, the Party leader highly valued the council’s work during 2016-2021, noting that it has continually reformed the operational model and methodology, gathered more scientists, institutes, academies, and universities, and built on the attainments and experiences gained in the previous terms to fulfill its functions and tasks, thereby contributing to common successes of the Party and the country.

He also suggested some issues needing attention in the time ahead and asked for thorough understanding of the requirements in the political theoretical work in the new period. The council’s role in providing consultations in terms of viewpoints, strategies and theoretical guidelines remains limited, the Party chief said, adding that many issues in the country’s 35-year Doi Moi (renewal) cause and 30-year implementation of the 1991 Platform, as well as newly emerging issues in reality in Vietnam and the world, have not been analysed and clarified.

The 13th National Party Congress identified the strategic vision as well as a detailed road map and steps to develop the country in the next five, 10, and 25 years. The international context and the demand for breakthrough development in the new period require that the Party continue reforming its development mindset in a way that fully taps into Vietnam’s potential, stature and conditions and matches development trends in the world and of the era, he pointed out.

The leader told the council to study new theoretical issues in the world, experiences of developed countries, along with scientific – technological revolutions.

General Secretary Trong also asked the council to improve the quality and effectiveness of political theory-related advice to help the Party Central Committee, the Politburo, and the Secretariat direct national development and defence efforts.

It should also proactively coordinate with ministries, sectors, central agencies, local Party committees, and political theory researchers nationwide in reality analysis and theoretical research, he said, adding that during the 25 years of operations, the council has established itself in the system of central agencies.

On this occasion, the Theoretical Council was granted a merit certificate from the Prime Minister in recognition of its contributions to the compilation of the documents of the 13th National Party Congress, the fight to protect the Party’s ideological foundation, and theoretical research.

Speaking at the handover conference on April 15, Deputy PM Khai congratulated Phong on his new role and expressed his belief that Phong will put his full potential into service so as to ensure the Government Inspectorate will function effectively.

Khai asked the new chief inspector to accelerate the inspection plan for 2021 while strengthening the discipline of inspection officials while performing their duty.

For his part, Government Inspector General Phong vowed to be impartial and strive to effectively carry out the duties assigned by the Party, State and people.

Doan Hong Phong was elected as chief of the Government Inspectorate at the 11th plenary session of the 14th National Assembly, replacing Le Minh Khai, who has been elected as Deputy Prime Minister.