On the first working day after the lunar New Year (Tet holiday), the streets of Saigon bustled again, but there were no traffic jams.

On the morning of February 17 (the 6th day of the lunar new year), people flocked to the streets to go to work on the first working day after a 7-day holiday.

From the early morning, traffic on the roads leading to the city center began to bustle.

Quang Hung, an insurance consultant at Generali, said that on the sixth day of the Lunar New Year, he sold a life insurance policy to a 49-year-old female client who was the breadwinner of her family, stating her intention of purchasing the life insurance package was to safeguard her family’s health, not to invest.

Likewise, insurance packages priced at around VND6 million ($264) per year attached to a critical illness insurance cover which could last until the policy-holder turns 75 years old were mostly endorsed by better-off families.

A general director of a Ho Chi Minh City-headquartered insurance firm listed some of the reasons behind the upturn in the demand for insurance purchasing after the Tet holiday.

Accordingly, the excessive amounts of “lucky money” gained from the holiday and the rising awareness among middle-aged clients about the importance of insurance coverage in their daily lives were the main drivers.

Beside the insurance sector, other markets also shone in the weeks after the Tet Holiday, for instance the gold trading market on Caishen Day (the tenth day of the lunar year when, according to popular belief, great fortune would be granted to those who buy gold on that day).

The “Tet Doan Ngo – Past and Present” display takes place at The Imperial Citadel of Thang Long from May 24 to June 30.

Tet Doan Ngo is celebrated on the fifth day of the fifth month in the lunar calendar.

The event marks the ‘middle day of summer’ or summer solstice, and is also the death anniversary of the national mother of Vietnam, Au Co, according to the official website of Vietnam National Administration of Tourism.

Beside recreating traditional sights of the festival, the exhibition also displays artworks inspired by this fest, with the most notable one being that of Henri Oger.

Henri Oger, or Henry-Joseph Oger, who passed away in 1939, was a French volunteer who came to Vietnam as a soldier and was known by many thanks to his collection of paintings depicting northern Vietnamese’s lifestyle at the beginning of the 20th century.

The artist even had a workshop on Hang Gai Street in the old town of Hanoi to produce artwork describing Vietnamese tradition and culture, especially those of the northern population a century ago.

The exhibition showcases Oger’s Mechanics and Crafts of the People of Annam collection, featuring traditions practiced during Tet Doan Ngo.

Annam was the name the West used to refer to Vietnam as a whole when the country was still a French colony.

The collection consists of several colorfully painted images, all of which were given to Vietnamese people after completion because the artist believed that Vietnamese could well comment on and appreciate his artworks.

On view are also recreated streets of ancient Hanoi selling oriental herbal medicine, a collection of colorful fans, and paintings of Thang Long heritage sites, among others.

Thang Long was Hanoi’s name in the older days as the ancient capital of Vietnam.

Tet Doan Ngo is becoming unfamiliar to many young generations, so such exhibitions are important for Vietnamese to remain connected to their former traditions and ancestry.

The festival used to be referred to as one of the strangest celebrations of Vietnam, with many activities such as piercing ears for young girls, dying fingernails and toenails, and killing insects, among others.

Here are some of the paintings in Henri Oger’s collection Mechanics and Crafts of the People of Annam: 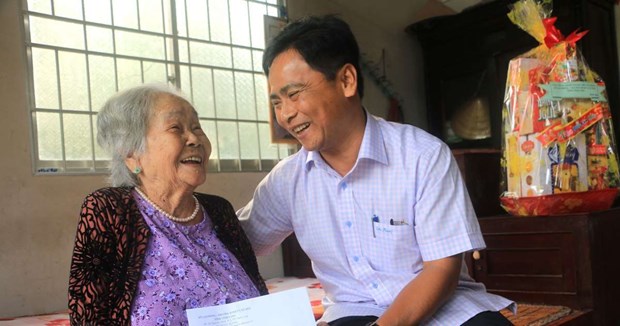 Hanoi (VNA) – Some 8.55 million poor and near poor people, Agent Orange/dioxin victims and disadvantaged workers nationwide enjoyed a warmer traditional Lunar New Year (Tet) holiday since they received support worth more than 6.11 trillion VND (265.24 million USD) through the Vietnam Fatherland Front (VFF) at all levels and trade unions, heard a conference held in Hanoi on February 17.

According to Vice President of the VFF Central Committee Truong Thi Ngoc Anh, the VFF at all levels splashed out over 910 billion VND to present 1.8 million Tet gift packages to the impoverished and people with difficult circumstances.

The VFF’s member organisations also carried out a wide range of Tet activities for policy beneficiary families , poor workers, disadvantaged people, and people with disabilities such as offering them with free coach and train tickets and presenting them saving books and healthcare insurance, she added. 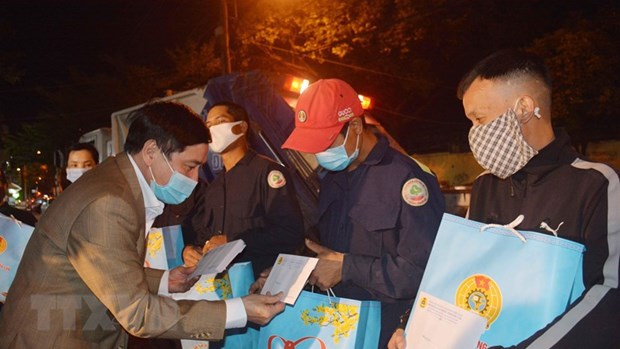 Speaking highly of the engagement of the VFF’s member organisations, President of the VFF Central Committee Tran Thanh Man affirmed that taking care of the poor, policy beneficiary families, people who rendered services to the nation and vulnerable groups must be done in a regular and continuous manner, particularly during Tet holidays to ensure that everyone is able to enjoy a warm New Year.

Despite formidable challenges caused by the COVID-19 pandemic, the Tet gifts were delivered to the needy across the nation, he stressed, asking the front and its members to have thorough understanding of the livelihoods of the people who have been affected by social distancing, and suffered difficulties in production and business so as to give timely support to them.

Furthermore, Man ordered better coordination between the VFF and its members with a view to caring the people who are directly fighting the pandemic, as well as those in border, mountainous and island areas, and localities hard hit by natural disasters./.

VNA
The General Statistics Office (GSO) unveiled on April 29 that the consumer price index (CPI) in April slipped by 0.04% compared to the previous month but rose by 1.27% from the figure recorded last December.

This latest decline in the CPI can largely be attributed to a plentiful supply of goods coupled with a low consumption demand for electricity and water.

CPI in April climbed by 2.7% against the same period from last year, while the average CPI during the initial four months of the year saw an increase of 0.89%, the lowest rise since 2016, with core inflation increasing by 0.74%.

Among the 11 main groups of consumer goods and services throughout April, a CPI decline was recorded in four categories, including restaurant and food services (down 0.13%), housing and construction materials (down 0.43%), post and telecommunications (down 0.2%), and cultural, entertainment, and tourism services (down 0.11%).

Elsewhere, the surge in the CPI could be seen in six groups, including transportation (up 0.87%), beverage and tobacco (up 0.14%), and household appliances (up 0.11%), while prices remained stable in other groups, such as garment and footwear.

According to the GSO, there are a number of other factors behind the CPI increase during four-month period, including rising rice prices and the increasing consumption demand for sticky rice and other forms of delicious non-glutinous rice during the Lunar New Year festival, known locally as Tet.

These moves have served to make rice prices during the reviewed period climb by 7.76% against the same period from last year. Experts also attributed the CPI hike to rises in the prices of food, oil and gas, and educational services.

Along with reasons for the CPI increase, experts said the slight CPI decline was also affected by the Government’s deployment of support packages for residents and businesses negatively impacted by the novel coronavirus (COVID-19) pandemic.

April witnessed local gold prices move in tandem with global gold prices, while the US dollar in the global market rose amid a tightening control of interest rates in the United States, along with improved prospects relating to the implementation of the COVID-19 vaccination programme in Europe.