HCMC – A doctor of the 105 Military Hospital in Hanoi, who previously both worked at the hospital and studied at the National Hospital for Tropical Diseases, has been infected with Covid-19, said a representative of the Hanoi Center for Disease Control.

He is under quarantine at the National Hospital for Tropical Diseases, which has been responsible for treating all Covid-19 cases in the northern region since the pandemic broke out in Vietnam early last year and is currently one of the biggest Covid-19 clusters in Vietnam during the latest coronavirus resurgence.

Earlier, he went to the National Hospital for Tropical Diseases during the day to study and returned to his home in the evening. From April 28 to 29, he still went to work.

The military hospital discovered that 22 people had close contact with the doctor and over 200 others were linked to him. It was also collecting the samples of all medical workers at the hospital to perform Covid-19 testing today, May 6.

This contest is aimed at enhancing international military cooperation among countries.

A contest on the International Army Games will be held in Vietnam during 14 weeks from May 6 to August 8, in the form of multiple choice combined with prediction of the number of people with correct answers.

The contest was announced at a press conference jointly held by the People’s Army Newspaper and the Ministry of National Defence’s Department for External Relations in Hanoi on May 4.

According to Deputy Editor-in-Chief of the People’s Army Newspaper Le Ngoc Long, the contest will be held every week, in which participants will answer directly on the questionnaires printed on the People’s Army newspaper.

Deputy Director of the department Pham Manh Thang said this contest is aimed at promoting the Army Games, enhancing international military cooperation among countries and as well as reviewing the achievements of the Vietnam People’s Army in previous events.

“Vietnam has actively worked to become one of the host countries for a number of games”, he said. “At the same time, we are seeking best method to organize activities of the Army Games at Mieu Mon Training Center in Hanoi, while ensuring prevention and control of Covid-19 pandemic.”

A wide range of prizes are offered for both individuals and groups with the value from VND2 million (US$86.5) to VND20 million (US$865.4).

The International Army Games 2021 is scheduled to be held between August 22 and September 4, across 13 nations, including Russia, Armenia, Algeria, Iran, Belarus, India, Kazakhstan, Qatar, China, Mongolia, Serbia, Uzbekistan and Vietnam.

Of the 34 competitions, Vietnam will host the rescue and shooting.

The National Hospital for Tropical Diseases, a frontline facility in the nation’s Covid-fight, has been locked down since Wednesday after one of its doctors tested positive for the coronavirus.

By Thursday afternoon, authorities have recorded at least 42 coronavirus-positive cases associated with the hospital, of which 22 have been confirmed as Covid patients.

The three Thai Binh cases have been transferred to the Thai Binh Province General Hospital, with their residences locked down and contact tracing commenced by local authorities, said the provincial Center for Disease Control (CDC).

Further test results are needed to tag them as Covid-19 patients.

In Hung Yen, two coronavirus-positive cases are family members of a confirmed Covid patient at the National Hospital for Tropical Diseases. Both have stayed with the Covid patient for only a night. 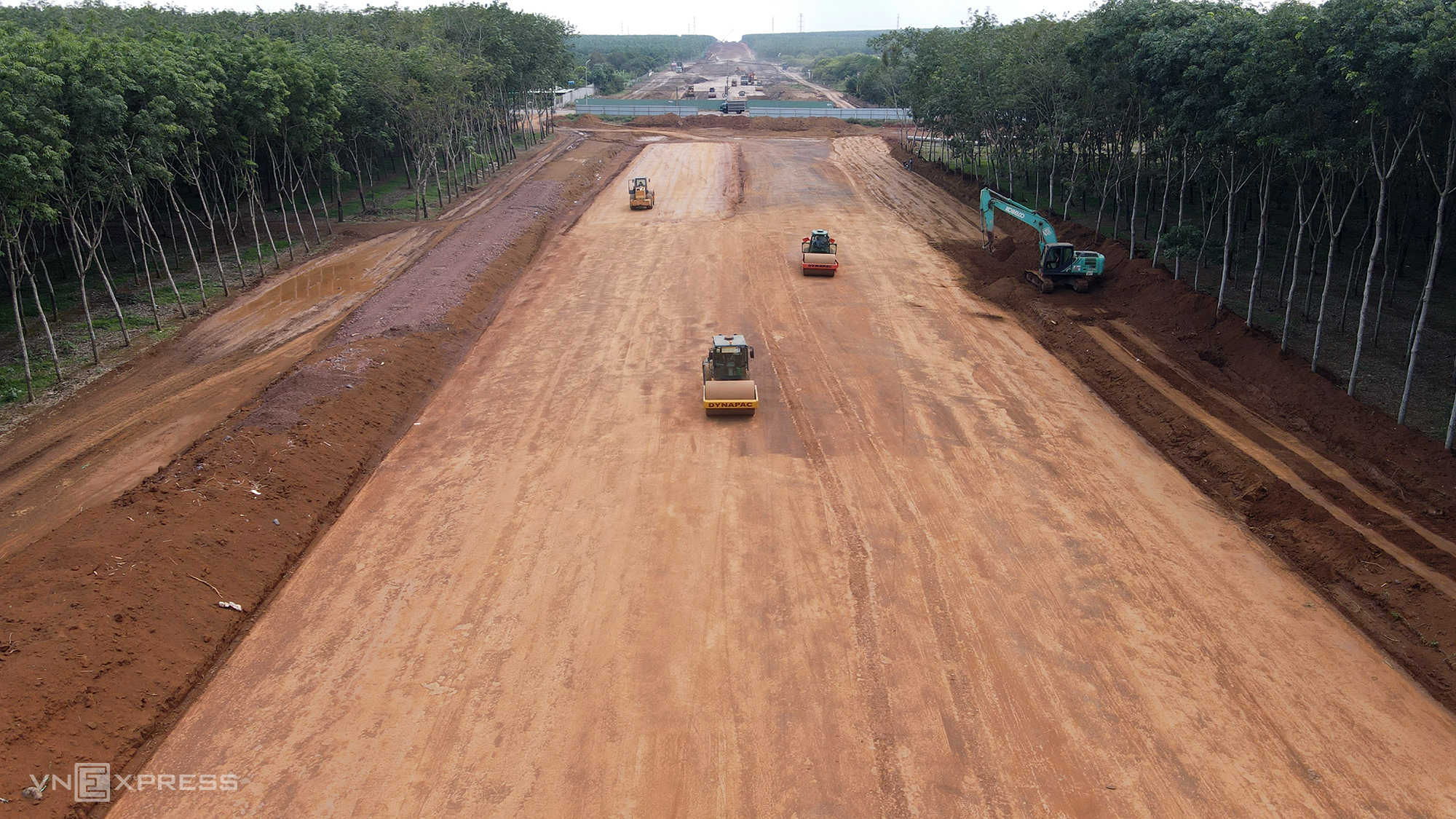 The Phan Thiet – Dau Giay expressway will span 99 kilometers, a surface breadth of more than 32 meters, with six lanes and allowing a top speed of 120 kph. Started at the end of September 2020, the VND12,500 billion ($543 million) project is expected to complete by the end of 2022.

After seven months, the project passing through Long Khanh Town is gradually taking shape. It is a part of a contract implemented by the consortium of Thang Long Corporation and Traffic Construction Corporation 6. 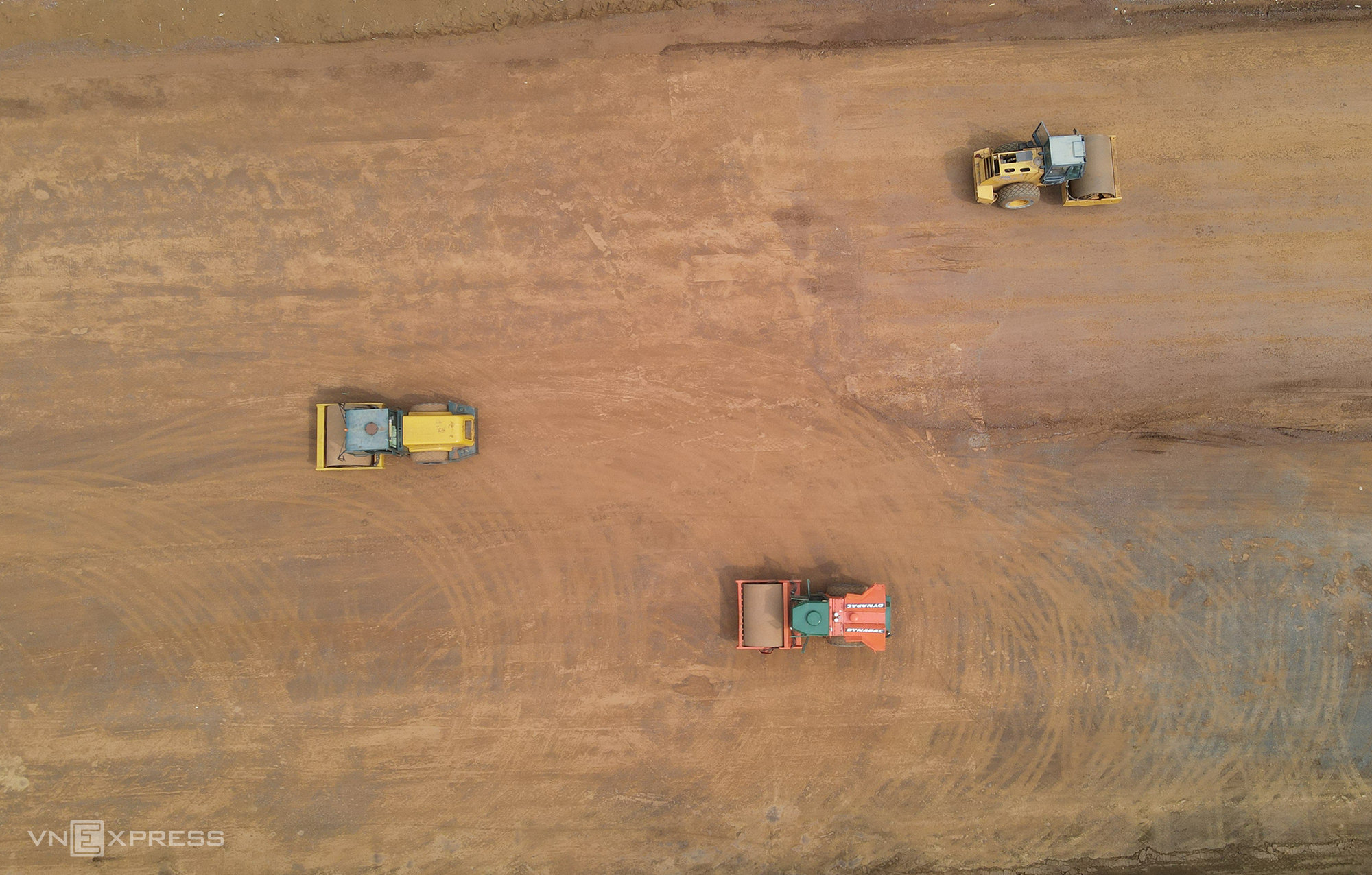 Workers toil to compact the highway surface, one of the most important phases of the project. 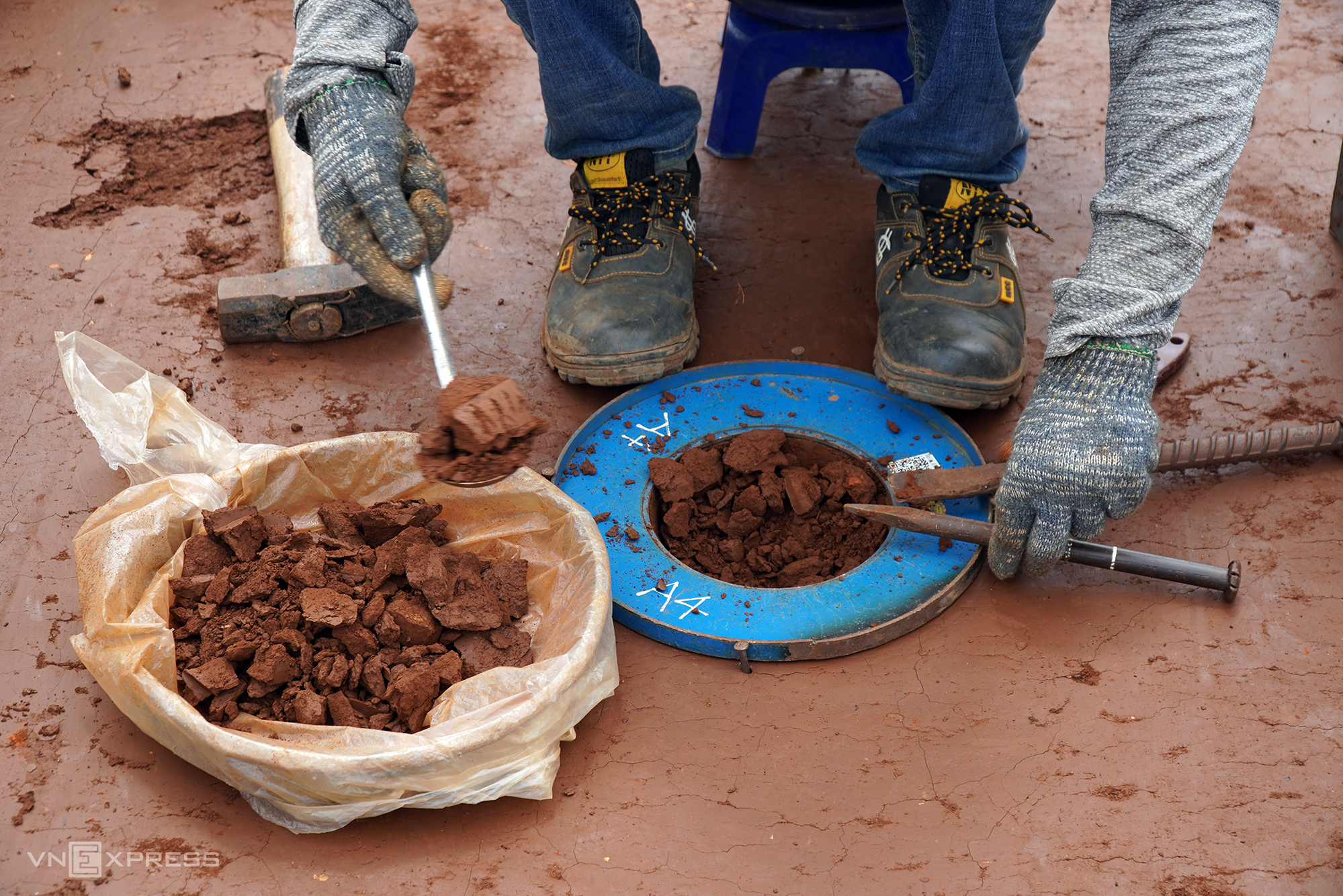 “It is important to determine moisture, technical specs, and ground density,” an engineer said, referring to compact testing. 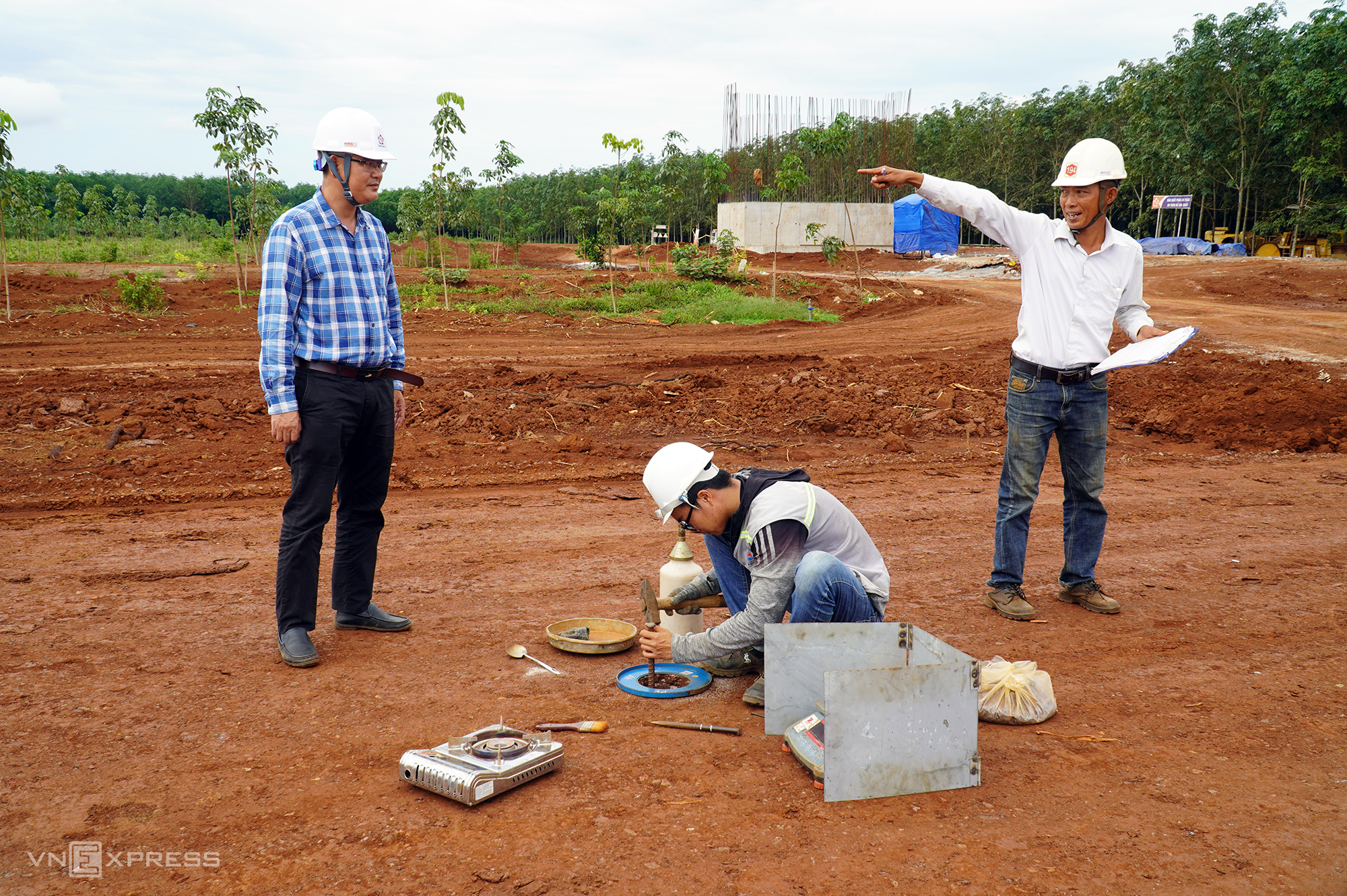 Quality supervision is regularly carried out by Thang Long Project Management Board to prevent errors. 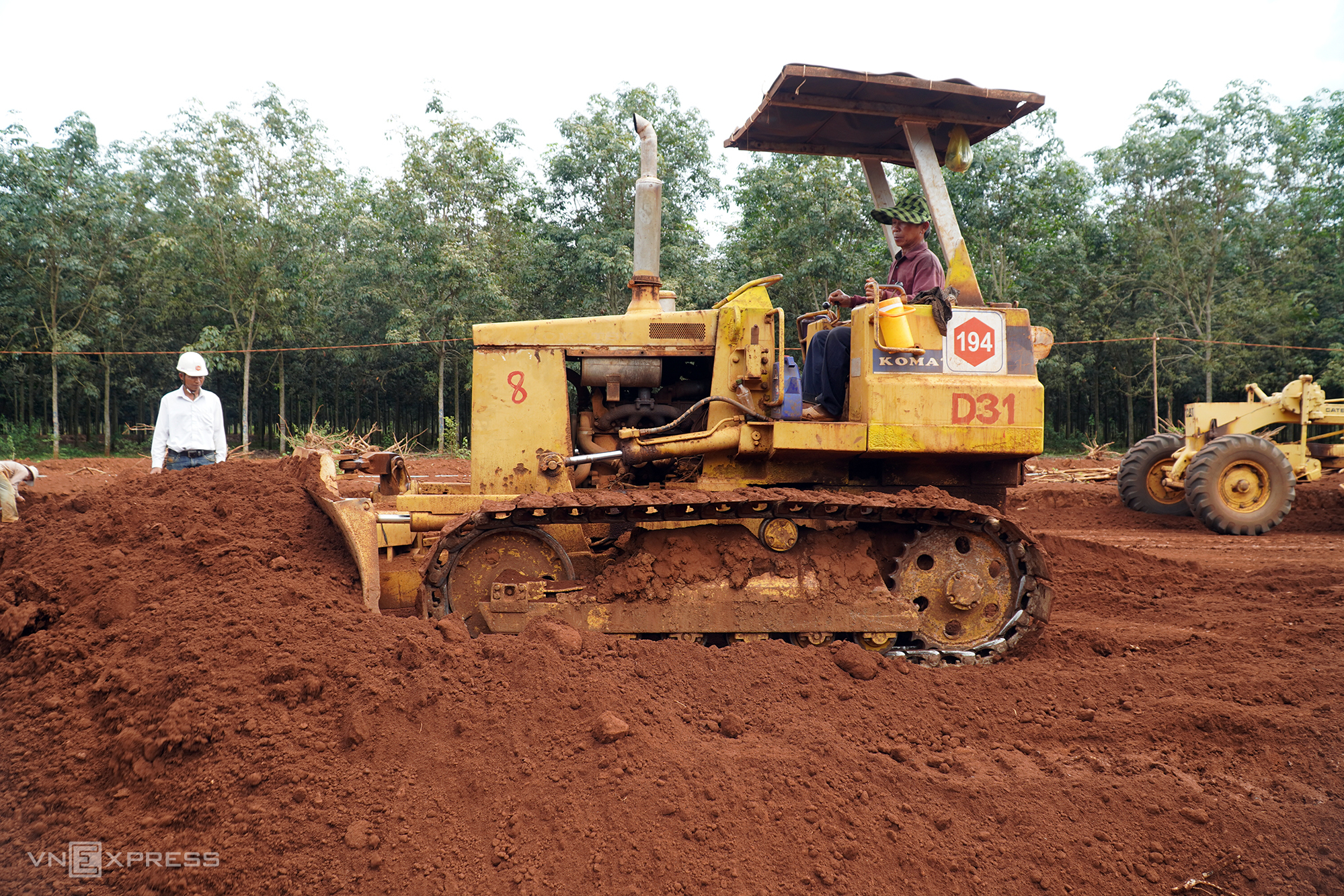 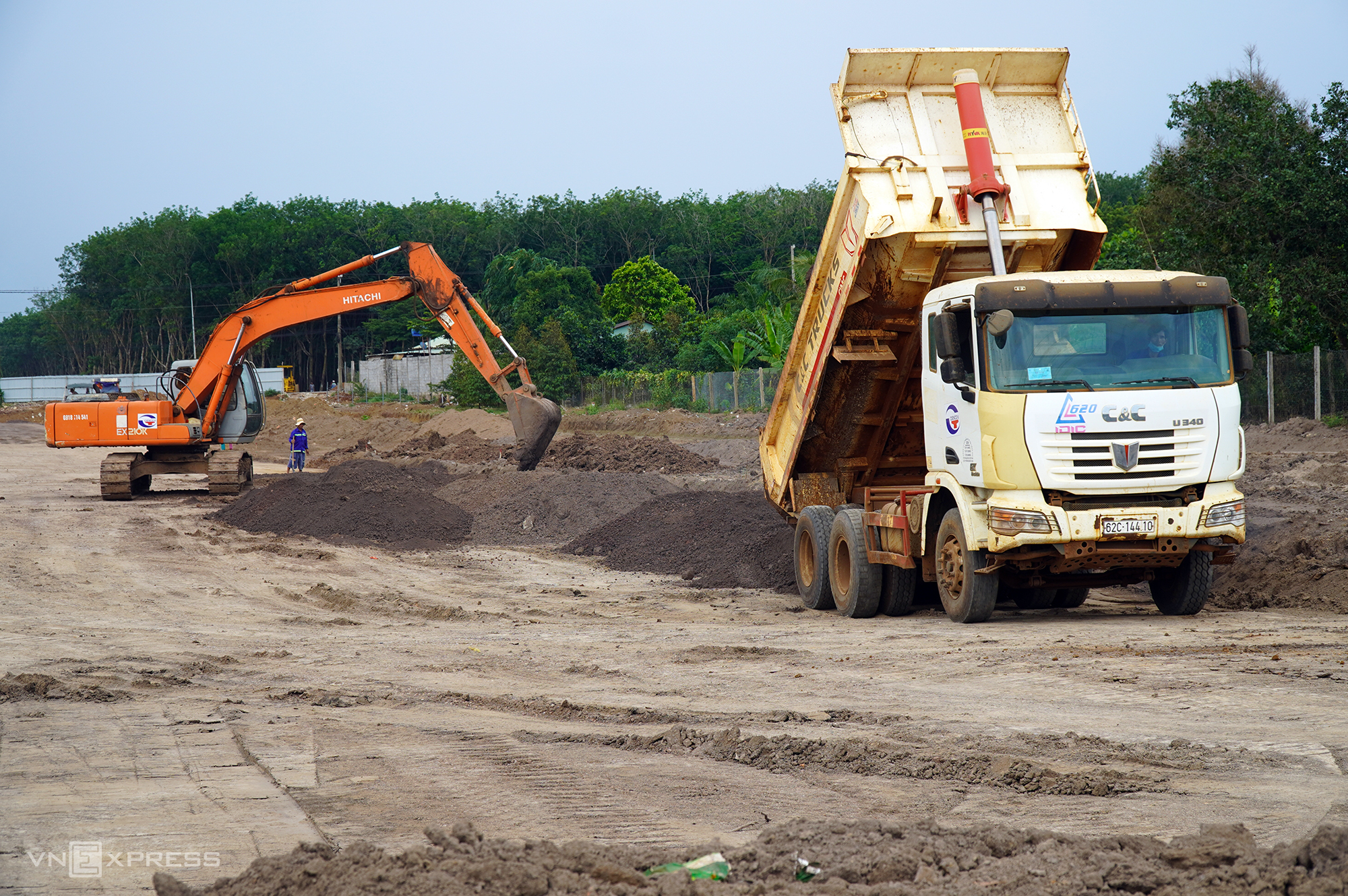 Raw materials are currently lacking since many suppliers have yet to commence production.

The Ministry of Transport has tasked Dong Nai Province to help speed up procedures, ensuring the supply of materials for the project. 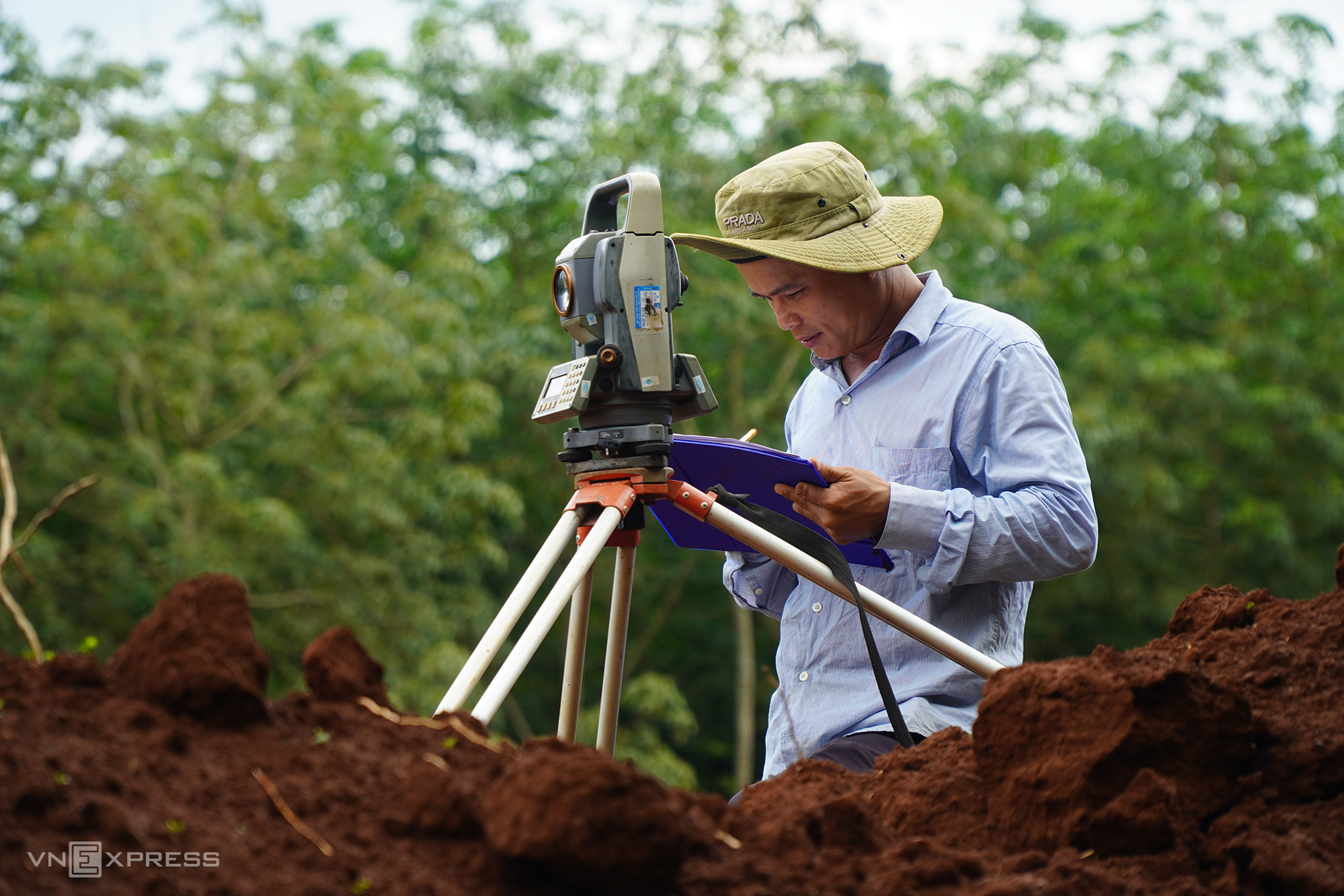 Engineers and construction workers are trying their best to complete the project in time, while ensuring its quality. 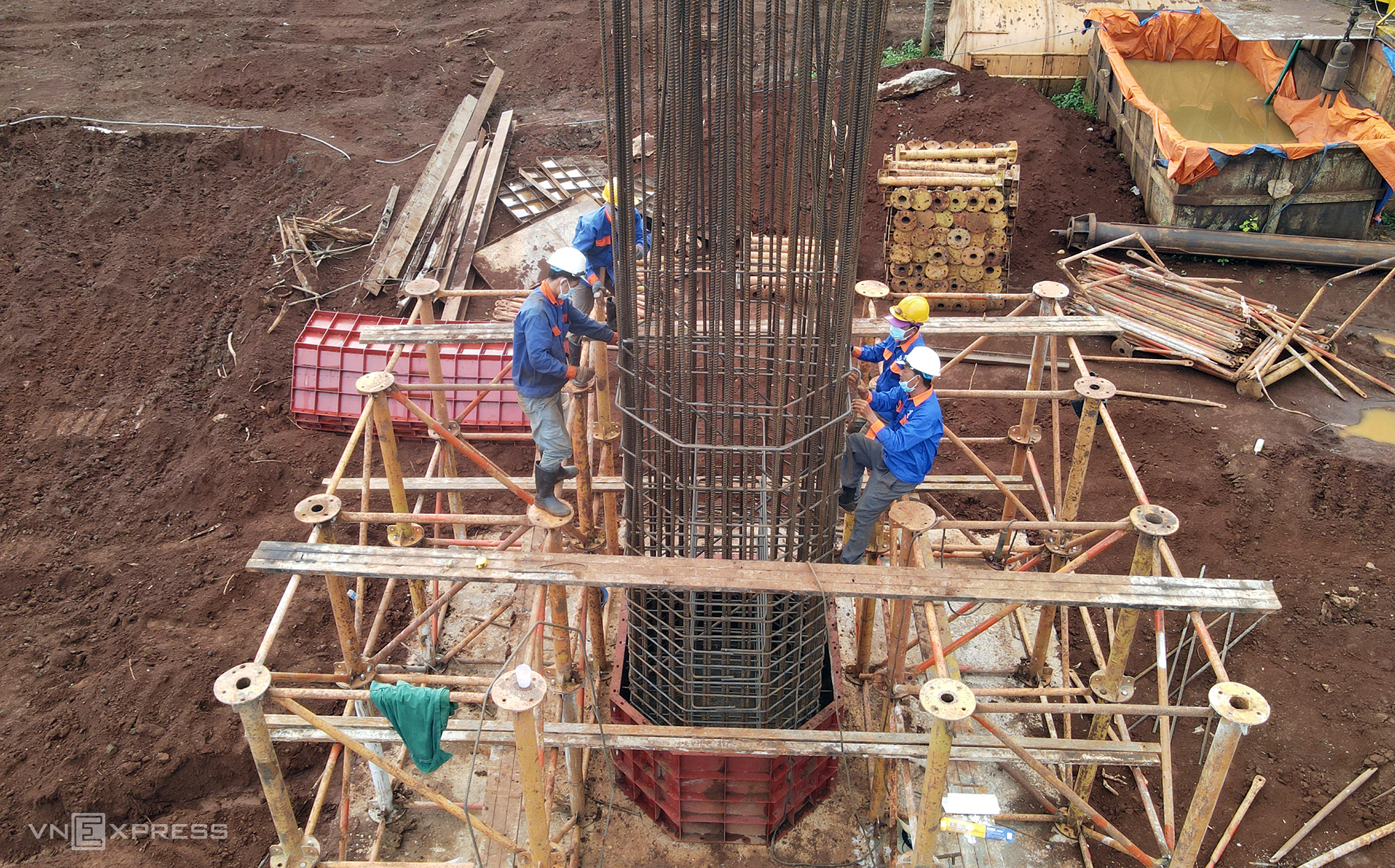 Construction of an overpass through Xuan Que Commune, Cam My District, Dong Nai Province. In addition to 16 kilometers of road, the project would include 10 overpasses and two residential roads. 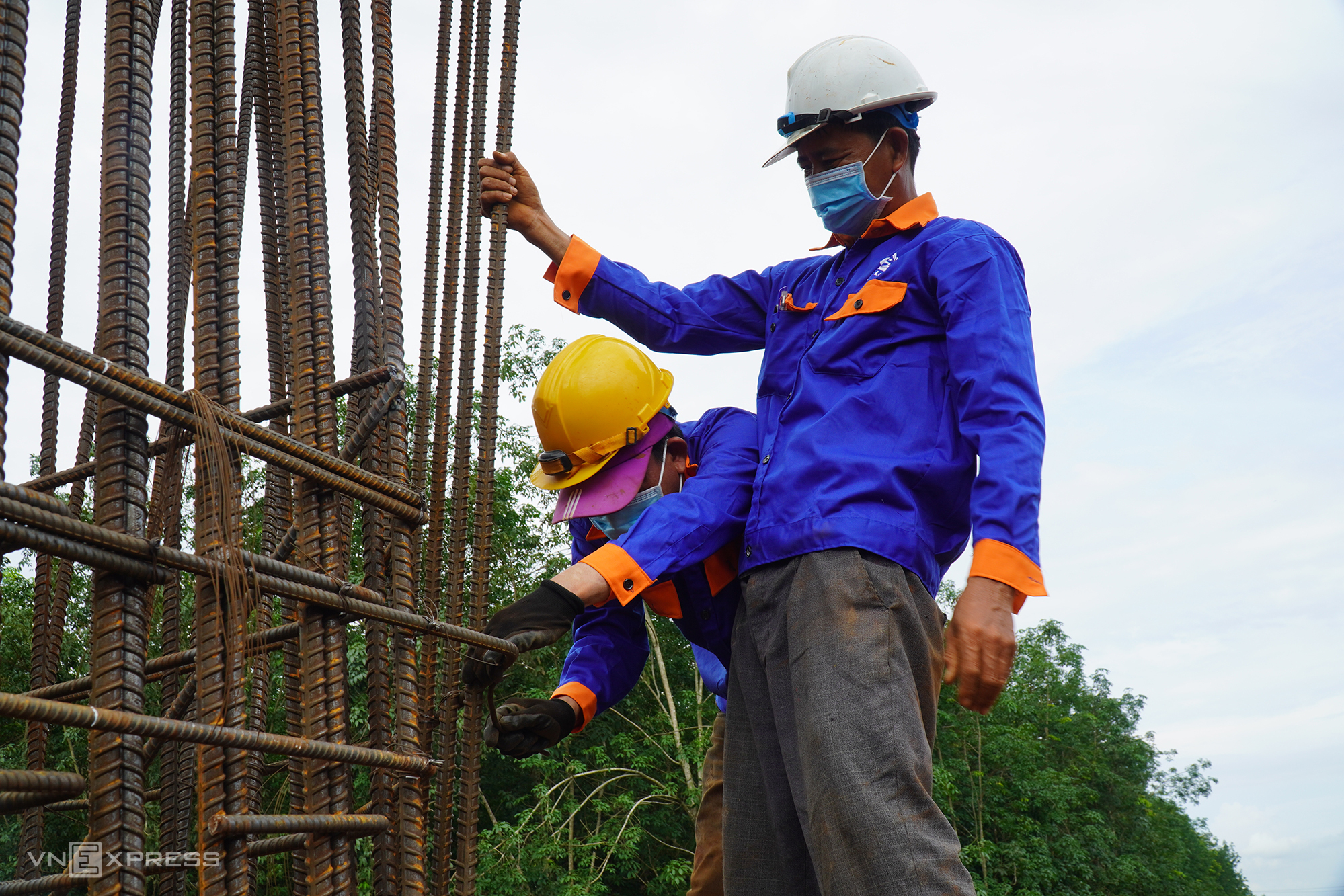 Workers prepare to pour concrete into a 4.75 meter fly-over pillar. 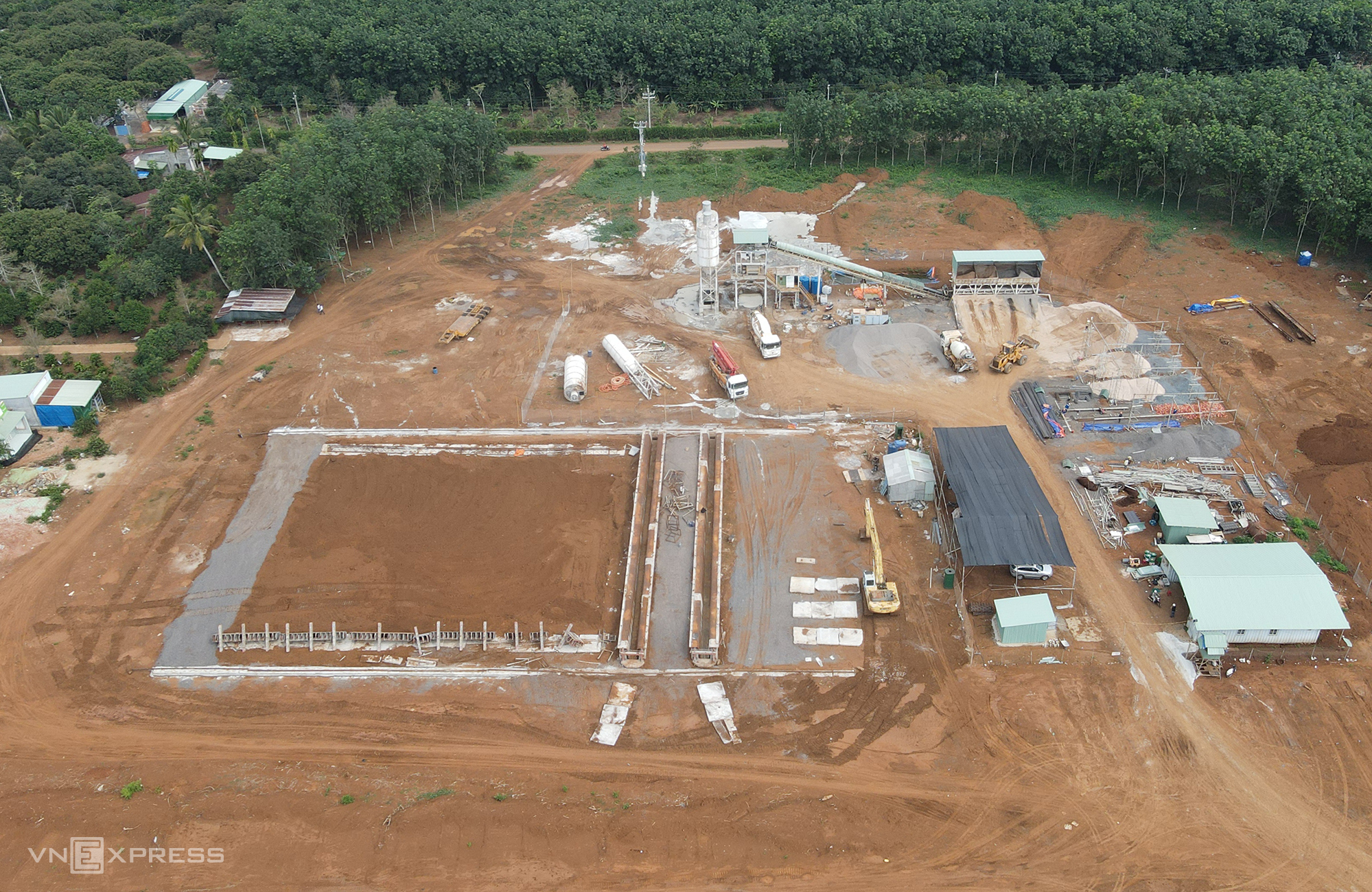 The concreting plant facilitates the construction of girders and culverts along the route, which will pass through Dong Nai and Binh Thuan provinces. 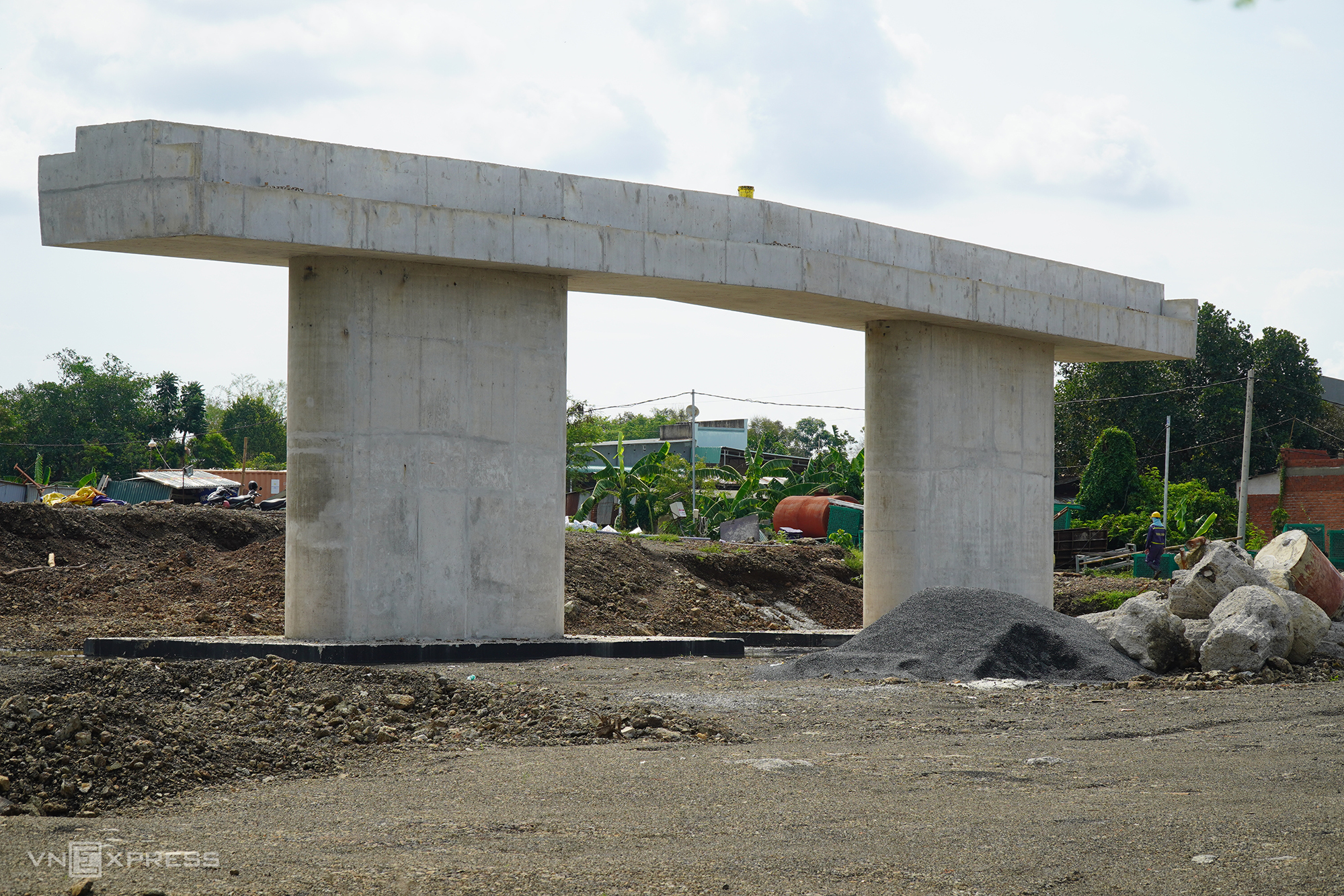 A bridge pier awaits a girder to run through Provincial Highway 765 in Dong Nai’s Xuan Loc District. This 33.5 kilometer section is overseen by Vinaconex and Trung Chinh Company. 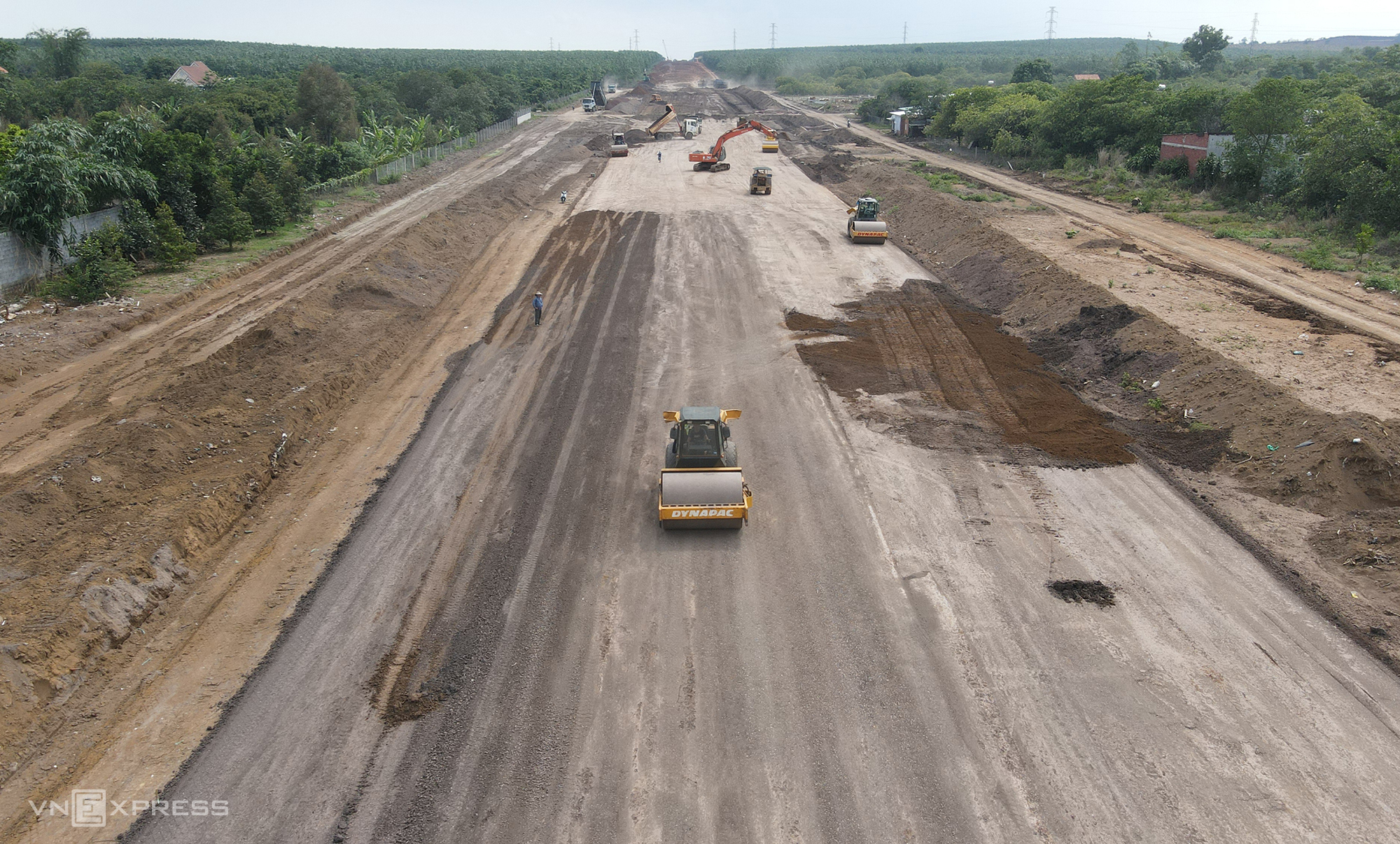 The project has important meaning for the socio-economic development of Binh Thuan and surrounding areas.

In addition to the Vinh Hao – Phan Thiet section, Phan Thiet – Dau Giay is part of the North-South Expressway project, expected to complete by 2022.

Starting April 27, Vietnam has suffered a new Covid-19 community outbreak with different clusters from north to south. Previously, the nation had gone over a month without community infections.

By Thursday morning, 64 locally-transmitted cases have been recorded in 10 localities, including 27 in Hanoi and 14 each in northern Ha Nam and Vinh Phuc provinces.

Hanoi has called on its citizens to not go out unnecessarily or form large gatherings in public, even for exercising and other sporting activities.

The capital city and Ho Chi Minh City, the country’s largest metropolises, have since the end of last month closed karaoke and massage parlors, bars, and dance clubs, and suspended sporting events.

The same move to suspend such non-essential services has been applied by Da Nang City and Nghe An Province in the central region, as well as Lao Cai Province in the north.

Da Nang has recorded two Covid cases, HCMC one while Nghe An and Lao Cai have none.

Northern Thai Binh Province has applied social distancing across the region starting Thursday noon after five contracted the novel coronavirus. The social distancing model bans gatherings of over 20 people in a place and gatherings of 10 people or more outside workplaces, schools and hospitals. It also requires a minimum distance of two meters between people in public.

Northern province Bac Ninh, with six people testing positive Thursday, has also told its people not to go out if it is not necessary, and stopped all non-essential services while nearby Yen Bai Province has isolated a district of 6,100 residents after reporting five Covid patients.

By Thursday morning, 18 cities and provinces, including Hanoi and Da Nang, have let students stay home to study online. A few of them have planned to let students return to school next week but most have decided to maintain home-schooling until it is safe enough to resume class.

Ho Chi Minh City has planned to let its more than 1.7 million students from kindergarten to high school levels to stay home from next week, by pushing for the final school year exams to be finished this week, one to two weeks earlier then previous schedule.

All tourism services have been put on hold at top attractions in Quang Ninh, including Ha Long Bay, and in Quang Nam, home to Hoi An ancient town.

In a similar move, the northern port city of Hai Phong has decided to stop receiving visitors for now.

It was revealed Thursday that several players of the Song Lam Nghe An (SLNA) club had come into contact with a man who had made contact with a woman, who has tested positive for the novel coronavirus, on a flight from Da Nang to Vinh, Nghe An’s capital. The Vietnam Professional Football JSC (VPF) then suspended the Hanoi v. SLNA match that was to be played Friday afternoon.

Since all games of the round need to be conducted at the same time frame to ensure fairness, all the remaining six matches of Round 13 would be suspended as well, the VPF said.

Round 13, or the last round of the first leg of the top-flight V. League, is crucial as it will decide the top six and bottom eight. The top six teams from the first leg will compete for the title while the bottom eight will have to battle to avoid relegation.

A schedule for future matches is yet to be decided as the V. League would have to make room for the national football team to prepare for their World Cup 2022 qualifiers.

According to the HCMC Center for Disease Control (CDC), those who have made indirect contact with a coronavirus case through someone else would need to self-isolate at home until test results confirm their infection status.