The vaccine called Comirnaty is developed from the messenger RNA or mRNA, which contains the instructions for human cells to construct a harmless piece of the coronavirus called the spike protein.

Pfizer Vietnam suggested for the vaccine to be approved, with the green light given by Deputy Health Minister Tran Van Thuan on Saturday, making it the fourth coronavirus vaccine allowed in Vietnam after the U.K.’s AstraZeneca, Russia’s Generium and China’s Sinopharm.

Based on evidence from clinical trials among people aged 16 years and older, the Pfizer-BioNTech vaccine was 95 percent effective and requires two doses given 21 days apart, according to the U.S. Center for Disease Control and Prevention (CDC).

The health ministry said Pfizer Vietnam is responsible for cooperating with vaccine manufacturers to ensure its production, safety and quality.

The company will also cooperate with the Administration of Science, Technology and Training under the health ministry to evaluate the vaccine’s safety and effectiveness, and with the National Institute for Control of Vaccines and Biologicals to evaluate the jab by providing samples and other relevant materials, before the vaccine could be put into use.

Earlier, the ministry stated it had secured a deal to get 31 million Pfizer vaccine doses this year.

Vietnam is also among 92 countries and territories the U.S. will donate Pfizer–BioNTech Covid-19 vaccine shots to by June of next year, the U.S. Embassy in Hanoi said Friday.

Vietnam has been using the AstraZeneca vaccine for its inoculation program, under which over 1.3 million people have gotten shots so far.

It aims to secure 150 million vaccine doses this year to cover 70 percent of its population.

The tropical storm has triggered drenching rainfall of up to 250 mm last night in the mainland provinces from Thanh Hoa to Quang Binh.

At 5 a.m. on Sunday, the eye of Koguma was located in the coastal mainland provinces from Thai Binh to Nghe An with a maximum wind of 75 kilometers an hour.

By this noon, the storm will move west northwestwards at a speed of 20 kilometers an hour and dowgrade into a tropical depression in the mainland of Thanh Hoa Province.

Koguma is forecast to continue bringing heavy rains and strong winds in the Red River Delta, the Northern midland region and provinces from Thanh Hoa to Ha Tinh. It will cause rain surges, rough sea, big waves, cyclones and whirlwinds in Bach Long Vi Island, the northern and southern territorial waters including the Spratly Islands, the coastal provinces from Binh Thuan to Kien Giang and the Gulf of Thailand on Sunday.

Downpour surge is expected to trigger floods in rivers and streams of the provinces from Thanh Hoa to Quang Binh from June 12 to 16. 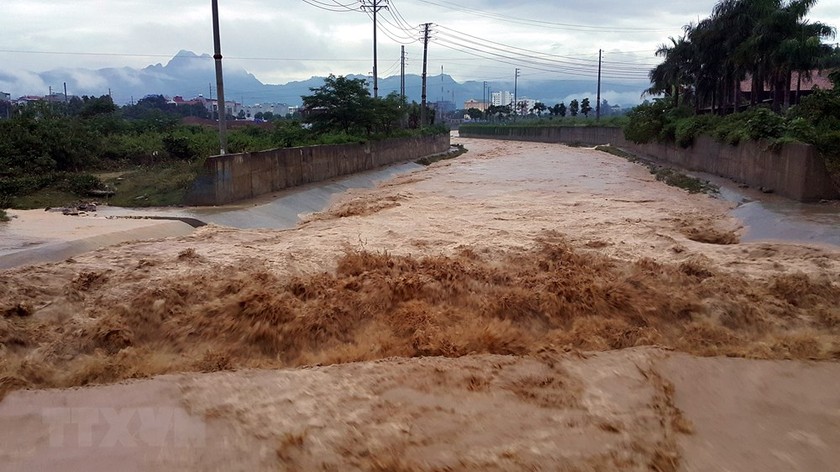 Risks of a flash flood, flooding and landslides are warned for low-lying areas of the Northern moutainous provinces

At the meeting, the two sides emphasized the fruitful developments in the two countries’ relations and the important role of the two Foreign Ministries in their bilateral ties.

They exchanged practical measures to promote the bilateral relationship. They agreed to devise and sign an action plan on implementing the strategic partnership between the two countries this year, boost political and diplomatic ties by increasing visits and exchanges at all levels via all channels, and regularly maintain existing bilateral cooperation mechanisms.

The two sides committed to continue coordinating closely and supporting each other at regional and global forums, such as the UN, ASEAN and APEC. They will realize commitments in the Comprehensive and Progressive Agreement for Trans-Pacific Partnership (CPTPP), boost the ratification of the Regional Comprehensive Economic Partnership (RCEP) agreement, and integrate the Greater Mekong Sub-region development with the building of the ASEAN Community.

At the event, the two sides exchanged regional and global issues of common concern as well as complicated developments in the East Sea [South China Sea]. They emphasized the importance of maintaining peace and stability in the East Sea and resolving disputes by peaceful means in line with international law, including the 1982 UN Convention on the Law of the Sea (UNCLOS 1982).

They also voiced their support for the full and effective implementation of the Declaration on the Conduct of Parties in the East Sea or South China Sea (DOC) and the negotiations between ASEAN and China to reach a practical, effective and efficient Code of Conduct in the East Sea (COC) in line with international law.