While Tran Hong Yen was waiting for a train in Munster, Germany last year, two white men passed by and said in German, “Go back to China and take the virus back with you.”

The 21-year-old Vietnamese student said: “I was stunned and confused. After I got home, the verbal attack was still stuck in my head and made me feel very angry. It looked like they had no one to vent their anger on and we were easy targets.”

She said the peaceful city, where she has studied for over 18 months, has changed a lot since the Covid-19 outbreak began. There are no more greetings or lifts to school from “kind” strangers.

She is now afraid to go outside.

Yen said one of her Asian friends had to see a psychiatrist for counseling after frequently facing discrimination and uncertainty caused by the pandemic.

Four years ago Long, a Vietnamese student in Washington, D.C., was on his way home from his part-time job when he was stopped by a young White man who begged for some change. Long politely refused and in return faced a torrent of abuse of Asians.

Two months later he happened to bump into the same person, but this time he was with a Black friend.

He said: “They followed and threatened me, pretended to have guns in their pockets and took my money. I was punched, knocked to the ground, kicked, and racially abused,” Long recalled about the incident that happened four years ago.

He was scared but tried to fight back.

“It affected me mentally for a while. I worry the same thing could happen again, especially during winter when it gets dark early and I often travel alone by bus. Will things get even worse this time?”

Long and Yen are but two of the myriad Asian victims of bigotry, racism and xenophobia in western countries, and these have only worsened following the Covid outbreak.

In Vancouver, Canada, the number of hate crimes reported against Asians increased by 717 percent last year.

But many countries like France, Germany and Belgium do not collect demographic data based on race, making it difficult to accurately understand the scale of the problem.

Data from the London Metropolitan Police shows there were more than 200 attacks on East Asians between June and September 2020, a 96 percent increase year-on-year.

In a 2019 report, the Spanish government said 2.9 percent of Asian citizens were victims of racism.

In France, campaigners say the global pandemic has worsened the lives of Asian communities. In Paris alone, attacks on or insults against Asians happen every two days.

President Joe Biden has said attacks against Asians “skyrocketed” and called on the American people to resist “the rise of xenophobia.”

There is more and more research showing that being stigmatized is affecting the mental health of Asians in the west. The U.S.’s 2018 National Health Interview Survey found that nearly 44 percent of Asian Americans had experienced depression and sought out a psychiatrist.

People from Cambodia, Laos and Vietnam are at high risk of post-traumatic stress disorder, according to the Centers for Disease Control and Prevention.

The American Psychological Association said victims of hostile and racist behavior often experience stress, depression, anxiety, anger, and lack of confidence after trauma. According to experts, it also exposes the deficiencies in the healthcare system for Asians studying and working abroad.

In the U.S., Asian Pacific Islander communities have less access to mental health services than any other ethnic group. International student health insurance usually does not cover the cost of psychological examination. Language barriers and the lack of understanding of Asian history and culture make it difficult for professionals to counsel their clients.

Mandy Diec, director of California at the Southeast Asia Resource Action Center (SEARAC), said: “This is not new, but it does cause a lot of damage. The biggest problem is that we are living with a healthcare system that does not meet the needs of the community.”

A survey by SEARAC of the Cambodian, Vietnamese, Laotian, and Chinese communities in the U.S. found that 29 percent of respondents encountered problems due to insufficient understanding of mental health services.

For Long, the incident four years ago does not affect his current life too much but he is worried about the growing wave hatred toward Asians, especially following the Covid-19 outbreak.

Yen said many of her Asian friends are often hesitant about talking about discrimination and trauma.

“I don’t understand why people feel so embarrassed. We are not at fault. Everyone should raise awareness about the issue of racism and discrimination against Asians. Don’t wait until you or relatives experience it to speak up.” 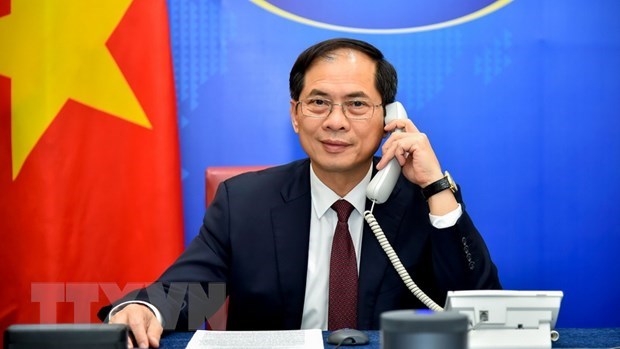 
Hanoi (VNA) – Minister of Foreign Affairs Bui Thanh Son affirmed Vietnam attaches importance to and wants to foster cooperation across all fields with Poland during a phone talks with his Polish counterpart Zbigniew Rau on April 20.

Rau, who made the call to congratulate Son on his recent appointment as Foreign Minister, lauded progresses posted in the Vietnam – Poland friendship and multifaceted collaboration and expressed his belief that Son, in his new post, will continue to work to further deepen the relations.

On his part, the Vietnamese diplomat agreed that both nations should work together to increase exchanges of their high-ranking delegations, ministries, sectors, and localities when conditions allow.

Both ministers said the maintaining of a regular political consultation mechanism at the deputy foreign ministerial level and policy exchanges at department level helps to enhance the two ministries’ role in lifting the Vietnam – Poland ties and cooperation in the international arena.

They also expressed their delight at robust and effective growth of the countries’ economic engagements. Currently, Poland is the biggest trade partner of Vietnam in the Eastern Central Europe, with their bilateral trade exceeding 2.1 billion USD last year.

Son took the occasion to thank the Polish Government for facilitating the Vietnamese community in Poland to stabilise their lives and promote their role in connecting the nations’ friendship.

He invited Rau to visit Vietnam at a suitable time in the future./.

Problems that have delayed AstraZeneca supplies to the COVAX vaccine-sharing facility have been resolved, UNICEF told Reuters on Tuesday, saying it should receive 65 million doses by end-May from manufacturers outside India.

The rollout of COVID vaccines has been disrupted by supply shortfalls in many countries, aggravated by a temporary hold on exports of the inoculation made by the Serum Institute of India (SII) as the country battles to contain a surge in infections.

“The initial challenges related to release of vaccines due to ramping up a new supply chain and production across different continents have now been resolved,” the U.N. agency responsible for distributing vaccines through the programme told Reuters in an email.

“At this point, UNICEF expects around 65 million doses of COVID-19 vaccines from suppliers outside of India will be available for supply through the end of May to 80 countries.”

COVAX is also holding talks with New Delhi for SII to resume supplies of the AstraZeneca vaccine, UNICEF said.

In addition to the 65 million doses expected from outside India, mostly made in South Korea, it also anticipates receiving 50 million doses next month from the SII compared with almost none this month.

COVAX had expected a total of more than 100 million doses from SII between February and May, excluding supplies for India, but has so far received only about 18.2 million.

As India battles its biggest jump in coronavirus infections and opens up vaccinations to all its adults from next month, SII is unlikely to be able to restart major exports soon.

“While discussions on the resumption of SII deliveries continue, COVAX will continue to transmit vaccines from other delivery partners,” such as Pfizer/BioNTech or AstraZeneca outside India, UNICEF said.

“A number of shipments are currently being planned to ensure that all available supplies are put to use without delays following release from the manufacturers. Plans are also being laid to make up lost ground as soon as supply allows.”

India this week approved an advance payment of about $400 million for SII, the world’s biggest maker of vaccines, for it to expand its monthly capacity to more than 100 million doses by end-May from up to 70 million now.

India has so far administered more than 127 million vaccine doses, 91% of those the SII-made AstraZeneca drug. The other vaccine in use is domestically developed Covaxin.

Vietnam and Singapore have agreed to accelerate negotiations on a priority travel mechanism towards resuming safe commercial flights between the two countries in order to boost their economic, trade, investment and tourism cooperation.


They will also increase the exchange of information and experience as well as cooperation to effectively respond to the COVID-19 pandemic, creating favourable conditions for the two countries’ citizens to return to their homes.

Lee congratulated Chinh on the latter’s recent election as Prime Minister of Vietnam, and expects to collaborate with the new Vietnamese Government leader to promote the strategic partnership in all areas between Singapore and Vietnam.

The two PM expressed their delight at the positive developments of the Vietnam-Singapore cooperation in recent times despite the impact of the COVID-19 pandemic. In particular, they noted Singapore is the biggest foreign investor in Vietnam, while the Vietnam – Singapore Industrial Park (VSIP) model is operating effectively, symbolizing the success in economic cooperation between the two countries.

Both sides consented to strengthen cooperation in the areas of their potential and strength, such as finance, information technology, agriculture and fisheries, education – training, and infrastructure.

They also underscored the need to expand bilateral cooperation to other areas to meet the requirements of the 4.0 industrial revolution, including clean energy, smart city development, innovation, digital economy; experience sharing in economic management and development, and high-quality human resource training.

Vietnamese Prime Minister Pham Minh Chinh highly appreciated the close and effective cooperation between the two countries at regional and international forums. He thanked Singapore for supporting Vietnam in assuming the ASEAN Chairmanship 2020 role, and asked Singapore to continue its support for Vietnam to fulfill its role as a non-permanent member of the United Nations Security Council in 2021.

The two PMs vowed to contribute positively to building a strong, united, ands resilient ASEAN Community which is proactive in adapting to any crisis while promoting its central role and having a common voice in addressing regional and international peace and security issues.

PM Chinh invited PM Lee to visit Vietnam at a convenient time, and the Singaporean leader accepted the invitation with pleasure. PM Lee also expressed his desire to welcome PM Chinh to Singapore some time later.