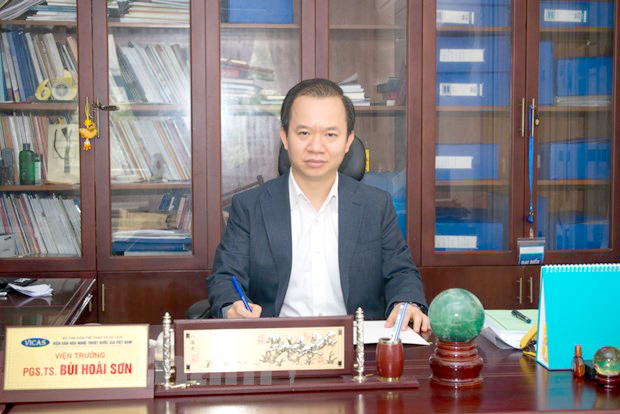 With increasing religious observance, the potential for scams is rising. Authorities need to step in to help people stay vigilant and avoid being duped.

E-newspaper VietnamPlus speaks with Associate Professor, Dr. Bùi Hoài Sơn, Director of Việt Nam National Institute of Culture and Arts, on the problem from a cultural and sociological perspective.

How do you evaluate people’s religious practices?

Social development leads to a number of consequences that make many people feel insecure, anxious and turn to religious beliefs as a consolation. Many individuals and organisations have built spiritual tourist sites, creating spiritual activities to fill that need.

In my own opinion, this practice has both positive and negative consequences. The positive thing is that the spiritual beliefs and practices help people be more determined in their work. From these efforts, society will develop.

Practising religion and beliefs also helps people appreciate the values of “ chân – thiện – mỹ ” (the true, the good and the beautiful), thereby reinforcing the virtue of honesty of each person. Practising religion is also part of traditional culture. Traditional cultural values, thereby, are maintained and strengthened by the Vietnamese society as the country is integrating into the global system.

However, this practice also has some negative consequences, as it leads to the restoration of unsound customs, pushes some people to the level of superstition, adversely affecting the spiritual and material life of each individual and family.

Scammers use spirituality, incantations, and worship to make profits. Notably, this behaviour takes place in the capital, not in the countryside. How do you evaluate this situation?

Currently, we are witnessing a lot of scammers that take advantage of beliefs and spirituality for profit, and it is worth noting that many highly educated people still believe in superstition. That shows there are factors governing people’s perceptions that make them believe in things which are not scientifically grounded.

Society at any stage also needs religion and beliefs. Before, people were confident that when science developed, religion would lose its place and disappear. This is not correct, because religion or belief, does not compete with science, but complements science at a point that science cannot explain.

There are many phenomena that cannot be explained by science that makes people believe in fate, in luck, and all of which have led them to spiritual therapy and superstition.

In your opinion, how should State management agencies, the media and cultural experts get involved in order to warn people?

The first thing to do is promote information in mass media. However, the information also needs certain precautions, otherwise it will backfire. Specifically, instead of condemning a certain phenomenon, we inadvertently create curiosity and stimulate attention towards the phenomenon itself.

Second, State management agencies need to issue specific sanctions and regulations. Spiritual profiteers need to be prosecuted so that they cannot take advantage of spiritual needs and lure others into superstitious activities.

I believe, when we create a healthy cultural life, we will minimise the negative impact of these phenomena on people, thereby helping us to build a healthy culture for society.

What should people do to protect themselves against inappropriate spiritual activities?

The boundary between religious practice, belief and superstition is quite fragile. Religion and belief contain many good values, therefore, each person’s life will become happier and more worthy of living by pursuing the values ​​that religion and beliefs bring. Therefore, in order to properly practice religions or a belief, we need to first understand the nature of it.

Religion or belief teaches people to think well, live well, do good things for others. When we do that, society will certainly be good. In addition, when we practice the right religion and belief, we will create a lifestyle that respects the traditions in the family.

Other factors, without scientific basis, are not the nature of religion or belief, and therefore, are not conducive to individual personal development and should be removed from social life. — VNS

The event is a highlight of the 2021 Hanoi Tourism and Culinary Culture Festival themed “Hanoians travel Hanoi”.

Speaking at the opening ceremony, Chairman of the Hanoi Municipal People’s Committee Chu Ngoc Anh hailed the achievements that the Party committee, authorities and people of Ba Vi District as well as the joint efforts by travel agencies in the localities over the past years.

He also noted that despite many difficulties on infrastructure and the heavy impact of COVID-19 pandemic, Ba Vi District has made many measures to maintain tourism activities and implement the “dual goal” of preventing and controlling the epidemic while boosting socio-economic development.

The local authorities and agencies have boldly developed and organised new tourism products as well as exploited the potential of nature and cultural identities to create specific products, bringing many new and interesting experiences tovisitors.

Taking place until August, visitors to the festival will have the chance to join various activities such as visiting Coc Hamlet in Minh Quang Commune with Muong – Dao Market, an introduction to the traditional cuisines of ethnic minority people, gong performances, Ba Vi Orchids Festival, the promotion of tourism products at the Ao Vua and Khoang Xanh tourist sites and Tan Da Resort.

In February, Shinhan Bank Vietnam named Lee Taekyung, former CEO of Shinhan Bank Cambodia, as new CEO of the local franchise. With 29 years of experience under his belt, Taekyung has been in charge of various positions of strategy, planning, risk management, and marketing, among others.

He previously took the helm as head of the Global Business Division of Shinhan Bank Korea and gained working experience at Shinhan Bank America and Shinhan Bank Cambodia. In the latter, Taekyung doubled the size of the bank, including assets, profits, the number of branches, and employees in just two years.

“In the ever-evolving financial landscape, customers’ needs will change quickly. We must be a bank that keeps pace with customer changes with customer-oriented value as the top priority,” he noted. “Vietnam is the most important country globally for Shinhan Financial Group, and we sincerely appreciate all of the customers. Shinhan Bank Vietnam will continue to expand corporate social responsibility activities in Vietnam and contribute more to society.”

Prior to her appointment as CEO in this country, she was the head of FM for Singapore, Australia, and Brunei, in which she was responsible for the development and execution of these markets’ FM strategy.

“Vietnam is an important market for our global network with significant opportunities to develop our businesses with universal banking capabilities. My key focus will be on providing valuable support and benefits to our clients, regulators, and the communities, building on our unrivalled local knowledge and international expertise,” Wee said.

She takes over the reins from Nirukt Sapru who was appointed as CEO for Vietnam, Laos, and Cambodia in 2013, and in 2015 took on the expanded role as the regional CEO for ASEAN and South Asia cluster markets including Australia, Brunei, Nepal, the Philippines, and Sri Lanka.

Last year, the Vietnamese subsidiary of Deutsche Bank appointed Huynh Buu Quang, former CEO of Maritime Bank (MSB), as its acting CEO. Quang had served as the CEO of locally-invested bank MSB for four years. He has 25 years of experience in the banking and financial sector and had previously held senior positions at HSBC.

Deutsche Bank’s Asia-Pacific CEO Alexander von zur Muehlen said, “With Vietnam a key growth market for our bank in ASEAN, we are delighted to have an individual of Quang’s calibre and experience leading the next phase in the expansion of the local franchise.”

In the region, Deutsche Bank AG has a long track record in providing corporate finance and advisory solutions to Vietnamese corporates, leading a number of notable capital market transactions. The bank’s expertise in loans and structured finance is also well known. Since 2017, Deutsche Bank has raised more than $1 billion in debt, loan and equity capital annually for Vietnamese corporates. The German lender confirmed its commitment in Vietnam to support higher trade flows from Europe, which are expected to increase following the recently ratified EU-Vietnam Free Trade Agreement.

Specifically, major Thai bank Kasikornbank received approval from the State Bank of Vietnam to open its Ho Chi Minh City branch in February. Kasikornbank aims to serve Thai business customers and clients of all shapes and sizes who have invested in Vietnam, as well as local retail customers. It targets lending of 10 billion baht ($318 million) in its first year of operation while also investing in startups with the aim of scouting advanced digital technologies for increased business opportunities.

“Kasikornbank has used the knowledge gained from services offered at its two representative offices in Hanoi and Ho Chi Minh City in order to upgrade the representative office in Ho Chi Minh City to a bank branch. It will focus on offering services to Thai, Chinese, Japanese, and South Korean companies wishing to expand their businesses in Vietnam for international trade and investment, as well as local entrepreneurs, especially those conducting business with Thai corporate customers of Kasikornbank,” the bank stated.