King’s Day is the Netherlands national day, on which we celebrate our unity in diversity. I would like to take you on a short journey through a few of many Dutch-Vietnamese co-operation projects and activities in the spirit of this joyous day. Việt Nam and the Netherlands enjoy strong ties, built on a solid foundation of economic co-operation. Did you know that Netherlands is the largest European investor in Việt Nam? And the second largest European trading partner?

But there is more than trade and investment only. We also enjoy strong cultural ties. I would like to highlight one project in particular: The World Press Photo. Every year, thousands of photographers from all over the world, including Việt Nam and the Netherlands, submit beautiful photos and stories that matter from the Andes Mountains in Latin America to the Mekong Delta in Việt Nam to the World Press Photo Foundation. The most meaningful photos and stories are then selected by an independent jury. The Netherlands Embassy and Consulate General in HCMC have both, in close co-operation with the local government and People’s Party, shown the exhibition in public spaces in both cities. We will continue to do so in future years, so the people of Viet Nam get to enjoy the same beautiful exhibition that is shown in Amsterdam and many other cities in the world. The exposition helps to create a deeper understanding for different people from diverse cultures all around the world. 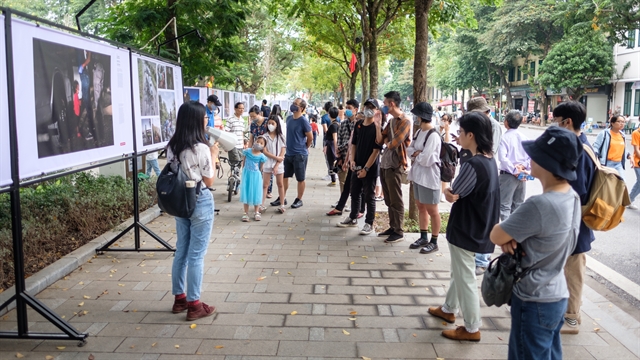 The Netherlands and Việt Nam share a long history with each other, and we also share part of our geography. Both countries are rich in deltas and have long-standing strategic partnerships to collaborate on climate adaptation and water management. That is both a blessing and a risk. Floods can bring many benefits such as fertile sediment, pest control and fish. The Netherlands, therefore, works closely with the Ministry of Natural Resources and Environment to develop a strategy for living with water in Việt Nam by creating space for water and floods.

When water and floods are not managed and contained, storms and heavy rainfall will continue to produce disasters like the past year in the central provinces. Such disasters expose the vulnerabilities of coasts and deltas that both Việt Nam and the Netherlands face. The aim of our co-operation is to turn vulnerabilities along the coast and in the Mekong Delta into resilience and sustainable, inclusive development.

Apart from our structural support to improve water security and water safety, the Kingdom of the Netherlands has granted 2 million euros in disaster relief funds for the victims of the recent disasters in central Việt Nam, on top of EU funds. This additional fund was provided to the Dutch Relief Alliance, a coalition of fifteen NGOs, who then disbursed the funds through their local offices and partners. The role of civil society organisations proved to be pivotal and contributed to an effective distribution to Vietnamese people in need of support.

Being the second-largest agricultural exporter in the world, the Netherlands is eager to support the development of the agricultural sector in Việt Nam. Việt Nam and the Netherlands have signed a Strategic Partnership Agreement in the field of agriculture of which an Agricultural Transformation Programme (ATP) is an integral part. The programme aims to mobilise and co-ordinate international assistance to support Viet Nam in speeding up its agricultural development. The objective is to move Vietnamese agriculture up in the value chain, provide access to the world market and contribute to the global sustainable development goals by promoting sustainable and climate-resilient agriculture. 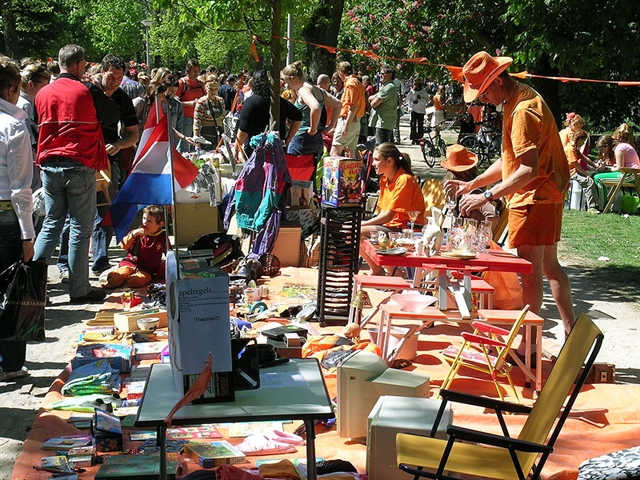 A flea market on the King’s Day – a special cultural feature of the Netherlands. — Photo partnerpete.com

The celebration of King’s Day in the Netherlands fits very well in a circular economy. Did you know that every year on King’s Day, Amsterdam and other cities, towns and villages turn into one big flea market? One man’s trash is another’s treasure and King’s Day is certainly a day for treasure hunting. Millions of people (including children) set up stalls and become entrepreneurs for one day.

Entrepreneurship is the lifeblood of every economy and benefits from the participation of as many entrepreneurs as possible, regardless of ethnicity, race, culture, age, or gender. Therefore, we are working with Viettrade and SheTrades on a project aiming to enhance the competitiveness of Vietnamese women-owned enterprises. E-learning courses for women entrepreneurs will be developed and multiplied via Train the Trainer activities to reach a wider community of women in localities. E-women participants to the courses can take part in a competition for The Best Business Plan, with a cash award of VNĐ100 million (US$4,357) for the first prize winner. We hope that many Vietnamese women will develop their entrepreneurial skills, will write a business plan to improve their business and will join the competition!

As Ambassador of the Kingdom of the Netherlands to Việt Nam, I look forward to continuing our co-operation in the realms of trade and investment, water, agriculture, sustainability and culture. But also hope that our understanding of one another will continue to grow and allow for our King’s Day, Vietnamese National Day and all national days over the world to soon be celebrated in person again. VNS

Sadio Mane scored twice for the English champions while Georginio Wijnaldum and Mohamed Salah added one each to cancel out a fine goal by Villa’s 17-year old striker Louie Barry, who netted on his senior debut for the Midlands side.

* Borussia Moenchengladbach battled back from two goals down to stun champions Bayern Munich 3-2 on Friday (Jan 8), with a double from Jonas Hofmann and another from Florian Neuhaus.

* Former Chelsea winger Damien Duff has stepped down from his role as one of Ireland’s assistant coaches, the country’s football association (FAI) said. The 41-year-old, who was capped 100 times by Ireland, was appointed to manager Stephen Kenny’s staff in August last year alongside Keith Andrews.

* Serena Williams and Naomi Osaka will join Rafa Nadal and Novak Djokovic in playing a pre-Australian Open warm-up exhibition in Adelaide after serving their quarantine in the South Australian city, Tennis Australia (TA) said on Saturday. The “A Day at the Drive” event will take place at the city’s Memorial Drive Tennis Centre on Jan. 29, a week before the delayed Grand Slam gets underway at Melbourne Park.

* Sergio Aguero could make his first Manchester City start since October when the club face Birmingham in the FA Cup third round on Sunday (Jan 10). Aguero, City’s record goalscorer, has made just nine appearances so far this season, with six of those from the bench, following a series of fitness problems.

* The Premier League on Friday (Jan 8) issued clubs new measures to combat the spread of COVID-19, threatening disciplinary action against players who breach training or matchday protocols. In a letter to all 20 top flight clubs, the league reiterated that players should not hug each other and shirt-swapping should stop in an attempt to limit the spread of the virus.

* Olympic long jump silver medallist Luvo Manyonga has been provisionally suspended for anti-doping whereabouts failures, the Athletics Integrity Unit said on Friday. The South African has been issued a notice of charge and could face up to two years suspension if found guilty, which would rule him out of the Olympic Games in Tokyo that are scheduled to start on July 23.

* Manchester United manager Ole Gunnar Solskjaer said goalkeeper Sergio Romero and defender Marcos Rojo are free to leave the club in the January transfer window. Solskjaer said the Argentine duo, who have not played this season, will not have their contracts extended beyond the end of the season.

* The English Football League, which governs the three divisions below the Premier League, said on Friday that 112 individuals tested positive for COVID-19 in the latest round of testing. This week’s testing included 66 EFL clubs that will play in the FA Cup third round, while the remaining six clubs which did not feature will be tested before their league games.

* Belgian Kirsten Flipkens retired against top-seeded American Sofia Kenin at the WTA 500 event in Abu Dhabi after suffering a freak left ankle injury during the second round match on Friday.

* Ajax Amsterdam have paid a club record 22.5 million euros to sign striker Sebastien Haller from West Ham United on a four-and-a-half-year contract, the Dutch league leaders announced on Friday. The 26-year-old returns to the Dutch league, where he scored 51 goals for Utrecht between 2014 and 2017, and revives his relationship with Ajax coach Erik ten Hag, in charge of Utrecht when the French-born striker played there.

* Eight Indonesian badminton players who breached the integrity regulations of the sport’s governing body were slapped with suspensions ranging from three years to life, said the Badminton World Federation (BWF) in a press release on Friday (Jan 8).