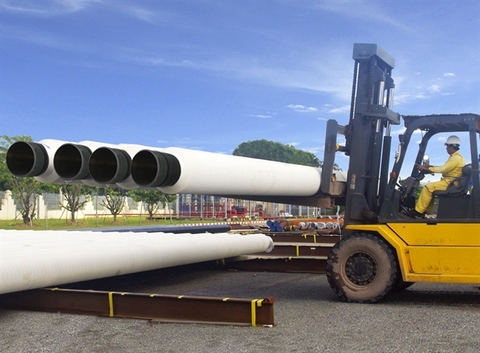 Even though the stock market fell last week, analysts from securities firms said that investors’ bullish sentiment can continue to support the benchmark VN-Index reaching 1,400 points this week.

The VN-Index on the Ho Chi Minh Stock Exchange (HoSE) closed last week at 1,351.74 points, recovering on the back of large-cap stocks. But for the week, the index still lost 0.5 per cent.

After plummeting due to strong profit-taking activities earlier last week, the market rebounded later in the week as risk appetite increased.

The market also received support from the improvement of the overload order problems and the comeback of foreign investors after net selling for eight consecutive sessions.

Analysts from MB Securities Corporation (MBS) said that the market was showing investors’ optimism. The positive sentiment would continue throughout this week, helping the market in the race to the 1,400 point-level.

On the technical front, MBS thought that the strong recovery of the market in late sessions last week ended the correction period around 1,300 points, creating momentum for the market to enter a new rising wave.

“With the current strong rally, we think the market can head to the target of 1,400 points in the coming sessions,” MBS said.

SSI Securities Corporation (SSI) also expressed optimism. “The VN-Index followed a positive scenario once there was confirmation about the recoveries of large-cap stocks, as well as the even spread of cash inflows,” SSI said.

“Therefore, there is the possibility that the VN-Index will continue to reach higher in the near future and head toward the target zone of 1,400 points.”

According to BOS Securities Corporation (BOS), technically, the market benchmark breached the resistance level of 1,350 points on strong demand, along with weaker selling pressure. This made some technical indicators reverse and showed positive signs in the short term.

However, cash flow warned about the possibility of weaker demand in some coming sessions. The VN-Index is likely to maintain its rally and head back to its previous peak of 1,370 points this week.

Meanwhile, Saigon – Hanoi Securities JSC (SHS) said that the market corrected after five straight weekly gains, but last week’s market liquidity remained at a high level with an average of nearly VND31.3 trillion (US$1.36 billion) per session on both bourses, which showed relatively strong selling pressure.

SHS forecast that the market might see some corrections when selling pressure rises at the current level.

They were followed by utilities and banking sectors, down 4.3 per cent and 3.8 per cent, respectively.

Foreign investors were still net sellers last week as they net sold a value of VND730 billion (US$32 million). But this amount was lower than that of the week before, which was nearly VND6.2 trillion (US$267.8 million). —VNS