Six grade-seven students were playing football on their school’s ground in Vietnam on Saturday afternoon when a lightning strike suddenly hit them, killing one, local authorities reported.

Ho Van Nhiet, chairman of a commune in north-central Quang Tri Province, confirmed on Saturday evening that the local government had handed over the body of the student to his family for burial.

The fatal incident happened at 3:00 pm the same day when a rainstorm together with a thunderstorm was striking the area.

Locals who witnessed the lightning strike took all the six students to hospital for emergency treatment, but Th. could not survive.

Among the five remaining victims, one was injured and needed treatment, while the others were shocked only.

Another schoolboy died due to lightning on Wednesday last week in Ha Tinh Province, located in the north-central region, when he was riding a bicycle home from school.

The fatality happened at around 4:30 pm on April 26, when a lightning strike knocked down 10-year-old Nguyen Duy Tr. when he was only 200 meters away from home.

Tr. was taken to a health center for emergency aid but he passed away later.

An airline technical worker was killed yesterday after being struck by lightning at Noi Bai Airport in Hanoi.

The 40-year-old man was working at the airport when the accident happened. He worked for Vietnam Airlines Engineering Company.

The worker was checking a Vietnam Airlines plane that was scheduled to leave Hà Nội for Vinh City when a bolt of lightning struck the right wing of the plane and killed him.

He died on the way to the hospital.

Trần Hoài Phương, director of the Northern Airports Authority, said the accident was a very sad and rare case. This was the first time a technical worker has been killed by lightning at the airport.

Phương said the airport has sufficient and standard lightning protection system and all equipment at the airport is checked regularly to ensure safety. — VNS

It prompted Bamboo Airways to stop using the aircraft for coming flights to fix its technical errors.

Bamboo Airways, an affiliate of FLC Group, Vietnam’s multi-industrial conglomerate, is prepared for an initial public offering (IPO) in the United States. 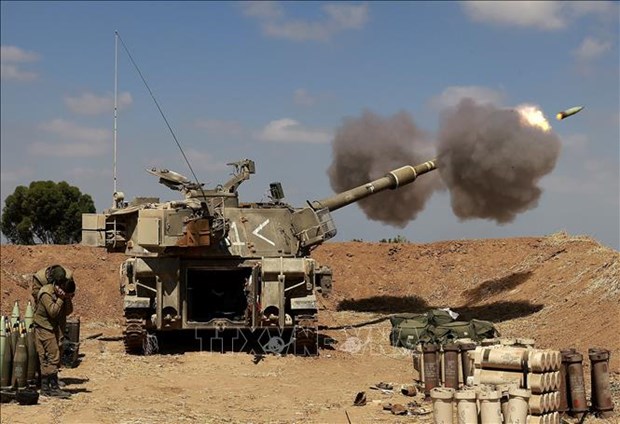 Lethal weapons are being used on the Gaza Strip (Photo: AFP/VNA)

Hanoi (VNA) – Malaysia and Indonesia on May 15 called on the United Nations Security Council (UNSC) to intervene and stop Israel’s strikes on the Gaza Strip, as the conflict between Israeli forces and Palestinian militants raged on.

Malaysia’s Prime Minister Muhyiddin Yassin said that in a phone conversation with Indonesia’s President Joko Widodo, both leaders agreed that Israel’s actions must be stopped immediately.

In a televised address, he said both were of similar views that the international community, especially the UNSC, should act swiftly to cease all forms of violence committed by Israel, and save the lives of Palestinians.

To date, the UNSC has not issued any statement on the current situation in Palestine, he added.

The Council will publicly discuss the worsening violence on May 16, diplomats said.

The 15-member council has met privately this week about the worst hostilities in the region in years, but has so far been unable to agree on a public statement.

The UNSC held the second emergency meeting this week on May 12 to discuss escalating tension between Israel and Palestine in recent days, during which Vietnam expressed serious concern over and opposed related violent acts./.

Scorching heat is attacking northern Vietnam, including Hanoi, with temperature likely surging to 37-38 degrees Celsius, and is forecast to last until May 16, the National Center for Hydro-Meteorological Forecasting (NCHMF) said.

The center noted that northern Vietnam has been affected by low-pressure air circulation carrying heat from the west, cranking up temperatures in Hanoi at around 1:00 pm to 37 degrees Celsius, and even higher in some places in mountainous areas.

Foehn wind, caused by impact of the southeastern edge of the western hot low-pressure area, is expected to work with the low-pressure circulation to expand the heat zone to northwestern regions, with temperatures ranging from 38 to 42 degrees Celsius, the NCHMF added.

Northern Vietnam may experience its hottest period from the end of May to July, however, the heat would not be as intense and long-lasting as it was last year, the center stated.

It warned that the ultraviolet index in Hanoi city will remain at the dangerous levels of 8 and 9, posing a high risk of skin damage, including skin cancer, for people exposed to the sun for a long time. Thus, people on the road are recommended to apply SPF 30+ sunscreen, wear a shirt, sunglasses and a hat.

The center’s experts warned that people should prevent probable fire in residential areas as well as wildfire, avoid outdoor activities from 11:00am to 4:00pm, drink water and take proper diet to enhance the immune system.

They also said that as May is still the transitional period from spring to summer, there is a collision between hot and cold waves, so extreme weather may occur such as tornadoes, hail and strong wind in the thunderstorm.

Britain is pursuing a deal with Australia as one of the pillars of its post-Brexit strategy to build stronger commercial and diplomatic links in the Indo-Pacific region.

Both countries in June said they have agreed on the vast majority of issues for a deal, which official estimates say could add GBP500 million (US$708.4 million) to British economic output over the long term.

“We are working hard to have an agreement in principle at the bilateral between Prime Ministers Johnson and Morrison on June 15,” Treadwell told reporters in Canberra.

The proposed deal with Australia is the most advanced of several deals being pursued by London.

Member nations of the Comprehensive and Progressive Agreement for Trans-Pacific Partnership (CPTPP) on Wednesday agreed to allow Britain to start the process of joining the pact, Japan’s economy minister said.