The Golden Dragons made the impressive fightbacks and almost wrote the late drama for the home team though it was led 3-0 most of the match.

Vietnam for the first time in its history qualified for the Third and Final Round of the FIFA World Cup Asian Qualifiers, the unique Southeast Asian team entering this stage.

The Golden Dragons bag 11 points after eight matches, including five wins, two draws, and one loss 2-3 to the host UAE at Zabeel Stadium in Dubai, UAE on June 16.

In the match with the home team, Vietnam ran into an inspired UAE team that mastered the midfield with their range of passing, unlike the team that likes to play possession-based football with their speedy and skillful players tormenting opponents with their crisp one-twos.

In the 32nd minute, the UAE drew first blood as the central midfielders combined. Abdullah Ramadan made a searching ball over the top to find Ali Salmeen who made a comfortable kick to settle the ball into the net.

Eight minutes later, the home team doubled the scores from a penalty which is believed to result from goalkeeper Bui Tan Truong’s foul against Abdullah Al-Naqbi. The mistake leading to the penalty remained controversial.

The third goal for the UAE came just five minutes after halftime. But the home team survived the late drama to book their place in the final round of qualifiers after Vietnam made the late fightbacks, not to mention an uncounted penalty that Vietnam should be given after Nguyen Cong Phuong was fouled by two UAE defenders in the 61st minute.

Indeed, being led 3-0 never let the Vietnamese players down. Nguyen Tien Linh scored a superb goal in the 85th minute before Tran Minh Vuong gave the UAE a scare in the 93rd minute with the team’s second goal.

Addressing the post-match press conference, Vietnam coach’s assistant Lu Dinh Tuan said “With the result of advancing the third round, the whole Vietnamese team should be proud of what have never been done. We have brought the Vietnamese spirit through the recent matches, introducing to the world the spirit of ‘never giving up.”

UAE coach Bert van Marwijk said he told his players from the very beginning that the match against Vietnam would not be an easy task. He said it could be the best match for the UAE.

Commentator Ta Bien Cuong of the Vietnam Television (VTV) gave some words to the Golden Dragons: “We lost a match but we win the round.”

Giving the post-match comment, Vietnamese journalist Minh Hai said Vietnam’s overshadowed by the home team in the first half but its strong will and determination enabled it to make the impressive fightbacks.

Inspiringly, the Vietnamese players are unbeaten in their last nearly 30 games across all competitions. The sentiment and spirit of the Golden Dragons have maintained this impressive run of results, earning love from its supporters as before.

The second best enables Vietnam to compete for the Third Round with 11 other teams which is scheduled between September 2021 and March 2022.

The second-placed UAE faced a must-win situation to qualify for the next round while “Vietnam have enjoyed a superb run in the qualifiers” as Sportskeeda described.

In November 2019, the UAE lost 1-0 to Vietnam at My Dinh National Stadium, Hanoi in the Second Round, the Asia Qualifiers. But it is still among the second strongest teams in Asia, only after candidates such as Japan, Korea, Iran, and Australia.

“Anything other than defeat to the Emiratis will seal the top spot in Group G of the second round of Asian qualifiers for the 2022 World Cup and secures progress to the final stage for the first time ever — along with a guaranteed berth at the next Asian Cup in 2023,” he said confidently in an article posted on ESPN.

He went on to say that for an unfancied Southeast Asian nation like Vietnam, qualifying for the World Cup would “already be a huge achievement.” “If anyone is going to do it, it would be the golden generation.” 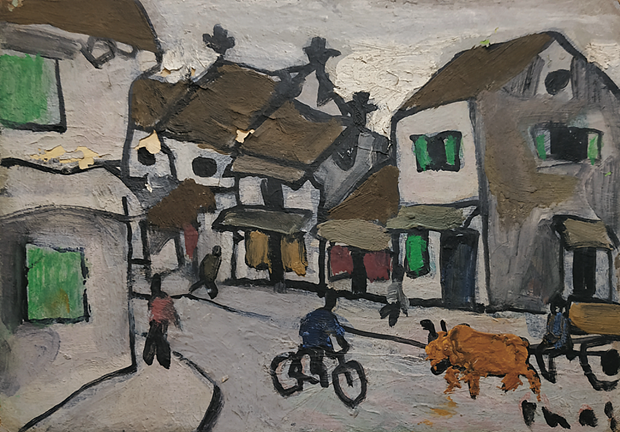 One of Vietnam’s best-known artists, Phai (1920-88) was born and lived all his life in Hanoi. He was a graduate of Indochina Fine Arts College.

For most of his life he worked in his studio at 87 Thuoc Bac street. He left a huge art heritage, among which pictures of the ancient streets of Hanoi , are the most famous.

He also drew cheo (traditional opera) and countryside. Phai had only one solo exhibition in his lifetime./.

Vietnam have advanced for the first time in their history to the final qualifying round for the 2022 FIFA World Cup on Qatar despite losing their last group stage game to the UAE on Tuesday.

The Vietnamese booked a place in the Asian qualifiers final round as one of the five best group runners-up.

They qualified even though they suffered a 2-3 defeat at the hands of the UAE in their last Group G game at Zabeel Stadium in Dubai.

In the end, the Southeast Asian team earned 17 points from eight games, one point adrift of the UAE at the summit.

The hosts overpowered the Golden Stars in most of the game, eyeing a revenge for their minimal loss in the first leg in Hanoi two years ago.

Vietnam played with a low formation to inhibit the Emiratis’ offense but they could not hold it for long.

Abdullah Ramadan delivered an overhead pass to central midfielder Ali Salmeen, who properly sneaked behind the Vietnamese defensive wall to fire home the opening goal 32 minutes into the match.

Ali Ahmed Mabkhout stepped up to convert from the spot after goalie Bui Tan Truong fouled onrushing Khalil Ibrahim Al Hammadi in the box under tremendous pressure from the hosts.

Mahmoud Khamis Alhammadi netted a third goal five minutes into the second half with a diving header following Truong’s first attempt to block another header from close range.

Vietnam fielded five substitutes before they snatched back two consolation goals in the remaining minutes.

Vuong scored a goal himself in the dying moments of injury time after a series of short passes between the Vietnamese players who had stolen the ball from the distracted hosts.

A draw for this round will be held in Malaysia on June 24. Matches are slated to kick off in September

The first two teams in each group will qualify for the FIFA World Cup finals in Qatar next year.

The two third-placed teams will compete for a ticket to the inter-confederation play-offs, which will be played in June 2022.

The decision has been made after Japan comprehensively considered the infection situation in Vietnam, the shortage of vaccines and Japan-Vietnam relationship, Motegi said in a news conference in Tokyo.

Vietnam has been facing a resurgence of infections since late April, with its health authorities reporting a hybrid coronavirus variant that combines characteristics of strains first detected in Britain and India.

The shipment of the vaccine produced in Japan under AstraZeneca Plc.’s license is due to arrive in Vietnam on June 16, he added.

Motegi further noted that Japan is considering additional vaccine donations to Vietnam and Taiwan (China) after taking into account supplies to other countries, the global infection and barriers to vaccine provisions among other factors.

Japan also plans similar shipments to other Southeast Asian nations, namely Indonesia, Malaysia, the Philippines and Thailand, in June and July, according to Motegi.

The shipment to Vietnam, Taiwan and other Asian neighbors are being made outside of COVAX Facility to speed up delivery, he said, since if everything goes through COVAX, the procedures in getting approval may take time.

The Ministry of Health confirmed on Tuesday nearly 400 domestic coronavirus infections in Vietnam, the majority in a hotbed in the northern region and 90 in Ho Chi Minh City.

A total of 398 local cases were reported across the country, including 204 in isolated areas, the health ministry said in a report the same day.

Northern Bac Giang Province, which is the nation’s largest cluster, recorded 235 of the infections, while its neighbor Bac Ninh Province detected 55 patients.

Vietnam has detected 7,997 community cases in 40 out of its 63 provinces and cities since the ongoing fourth virus wave broke out on April 27.

Authorities in Ho Chi Minh City on Monday decided to extend the enhanced social distancing measures having put in place since May 31 by two weeks to stall escalating community spread, as over 80 patients have been confirmed on a daily basis since the weekend.

The Southeast Asian nation has reported 11,212 cumulative infections as of Tuesday evening, including 9,566 domestic and 1,646 imported cases, according to the health ministry’s data.

The number of recovered patients has reached 4,543, including 303 announced on Tuesday, while 61 have died, most with severe pre-existing conditions.

More than 4.8 million people have been tested in this fourth wave, the worst so far.

The country administered 54,328 AstraZeneca vaccine shots to medical staff and other frontline workers on Monday, taking the total to 1,552,651 doses since inoculation was rolled out on March 8.

The government has set a target of securing 150 jabs, as it expects to immunize at least two-thirds of a population of almost 98 million people this year.

It has received about 2.9 million AstraZeneca shots so far.

HCMC – Japan will ship one million doses of the AstraZeneca PLC Covid-19 vaccines produced in Japan to Vietnam today, June 16, to support the latter in the fight against Covid-19, Japanese Foreign Minister Toshimitsu Motegi announced on June 15.

The decision to donate the vaccine was made following the Covid-19 situation in Vietnam, the shortage of Covid-19 vaccines and the relationship between the two countries, said Motegi.

Japan is also considering additional vaccine donations to Vietnam and Taiwan and shipments to other Southeast Asian countries, including Indonesia, Malaysia, the Philippines and Thailand between June and July, Motegi added.

At a meeting between Prime Minister Pham Minh Chinh and Japanese Ambassador to Vietnam Yamada Takio yesterday, the Japanese ambassador cited Japanese Prime Minister Suga Yoshihide as saying that Japan decided to donate the one million doses of Covid-19 vaccines to Vietnam to further cement the close friendship between the two nations.

This is a valuable and timely gift for Vietnam to combat the pandemic, showcasing the close friendship between Vietnam and Japan, said PM Chinh.