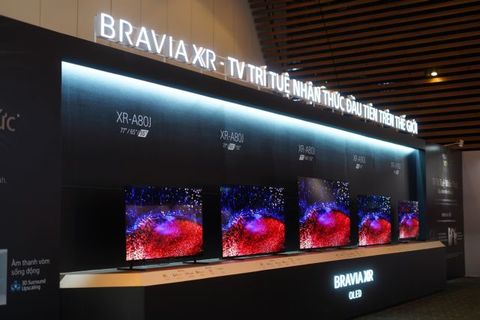 The new products include the Master series Z9J 8K LED and A90J OLED as well as the A80J OLED, X95J and X90J 4K LED televisions.

Powered by the Cognitive Processor XR, the brain of the new Bravia XR, the Bravia TV uses a completely new processing method that goes beyond conventional AI, designed to replicate the ways humans see and hear.

Cognitive Processor XR, powered by cognitive intelligence, divides the screen into numerous zones and detects where the “focal point” is in the picture.

While conventional AI can only detect and analyse picture elements like colour, contrast and detail individually, the new processor can cross-analyse an array of elements at once, just as our brains do.

Cognitive Processor XR can also analyse sound positions in the signal so the sound matches precisely with what’s on the screen.

In addition, it upconverts any sound to 3D surround sound, to deliver supreme realism with an immersive soundscape. It learns, analyses and understands unprecedented amounts of data and intelligently optimises every pixel, frame and scene for the most lifelike picture and sound Sony has ever delivered.

Panasonic decided to negotiate with Chinese rival TCL, the world third largest TV maker, to handle its outsource production, after considering many major manufacturers, according to Nikkei Asia Review.

It said the development of low-end TVs, which have low margins, will be outsourced to cut costs.

The company has followed other leading Japanese brands in scaling down TV production – an area formerly a major competitive advantage for the country’s electronics industry. Panasonic will continue to produce its own high-end TVs, mainly for sale in Japan. However, the company will also consider consolidating or shrinking production locations at home and abroad.

Panasonic used to hold 10 percent of the global TV market share but gradually lost its appeal when low-cost competitors from China appeared. Previously, Panasonic withdrew from the plasma TV segment, and discontinued production in the U.S. and China.

According to British research firm Omdia, by 2020, Panasonic ranked 12th worldwide in TV shipments with a 1.8 percent market share.

Sales and production of TVs account for less than 10 percent of Panasonic’s total revenue. This segment was profitable in the fiscal year ending March 2021 thanks to strong development of the domestic market.

However, the company soon found the opportunity to earn long-term profits from TVs is no longer stable. They were forced to restructure their businesses, similar to many other Japanese brands.

In Vietnam, Panasonic has eight companies, including Panasonic System Networks Vietnam in Hanoi which specializes in products for the export market like phones, projectors and others, and refrigerator and washing machine factories, an R&D center scattered across different locations, from Hanoi to central Da Nang and southern Ho Chi Minh, Can Tho cities. 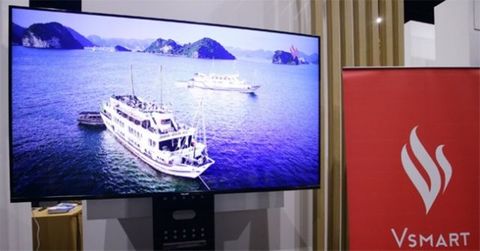 Before the latest withdrawal of Vinsmart, Japanese giants like Panasonic, Toshiba, and Sharp also dropped out of the Vietnamese television market.

Online news outlet zing.vn quoted a Toshiba representative as saying that they had stopped selling televisions in Viet Nam and focused on other household electronics products.

Panasonic also announced it would stop producing low-cost televisions at factories in India and Viet Nam to cut costs and restructure its business operations at the beginning of this month.

Like Sharp, Panasonic sold only a few television models in Viet Nam from 2018 and 2019 with old technology and at clearance sale prices.

Panasonic previously discontinued its plasma television line and closed television production lines in the US and China. It currently holds 1.8 per cent of the global television market share, according to analysis firm Omdia, and is only making money from growth in the Japanese market.

Pham Van Tam, chairman of the board of directors of Asanzo, once assessed that the television is no longer a key product of electronic businesses. He said firms only launched new products to maintain market share and brand, most have shifted to refrigeration, water purification and air purification.

Most recently, VinGroup halted the production of TVs and smartphones to focus on the development of its internet-of-things and infotainment segments for VinFast cars

“The production of smartphones and smart TVs (Vsmart) is no longer able to deliver breakthroughs and added-value for consumers.

“We have decided to instead invest in the development of smart vehicles, smart home and smart city solutions, areas in which we are confident we can deliver excellent customer experience and value,” said Nguyen Viet Quang vice-president and VinGroup’s CEO.

Meanwhile, a representative of Sony Viet Nam told Zing that the firm planned to focus on the large-screen television segment and compete based on technology and product quality.

Over the years, this company and other big names such as Samsung, LG and Chinese and Thai television brands like TCL, Mobell, Falcon, and Casper have launched many new products and technologies.

A representative of Samsung Viet Nam said the company had outlined a strategy to maintain its leading position in the 8K market while diversifying the QLED product range and expanding the market for lifestyle television lines.

The latest report of research firm GfK said the three brands that led the television market in Viet Nam were Samsung, Sony and LG by the end of the third quarter of last year. In which, Samsung accounted for the largest market share at up to 44.7 per cent.

However, while Samsung and LG have increased their market share by 1-5 per cent each year since 2018, Sony’s market share is gradually getting smaller, from 32.6 per cent in 2018 to 25.9 per cent at the end of September last year.

This report also showed that the large screen television market at 55 inches and above tended to grow strongly despite the COVID-19 pandemic.

Vietnamese consumers bought 919,300 televisions in this segment by the end of September last year, up 29 per cent compared to 2017. — VNS

A global chip shortage is creating more pressure for manufacturers in Vietnam as they deal with slowed-down production for electronics and tech products,

while local and overseas players are racing to prepare new premises for the production of much-needed supply.

Last week, Vingroup officially announced the shutdown of VinSmart, its smartphone and TV production arm, to focus on its automobile unit VinFast. The move is not seen as a surprising one as Vingroup has also withdrawn from retail, agriculture, and aviation in recent times to focus its resources on smart homes and electric vehicles.

Vingroup also plans to introduce its version of electric cars in the United States in 2022, with the conglomerate reportedly mulling an initial public offering in the US for VinFast that could raise $2 billion.

According to Nguyen Viet Quang, vice president and general director of Vingroup, the smartphone and TV production market is highly saturated with low-profit margins so many big players like Sony, LG, and HTC have also quit the game. Moreover, the costs for smartphone production are increasing significantly due to the severe shortage of chipsets and the rising costs of accessories over the past year, making it difficult to compete.

In the first quarter of 2021, VinSmart accounted for a 10-per-cent market share in Vietnam but its annual growth had been stagnant, according to a report by Singapore-based market analyst firm Canalys. The supply of critical components such as chipsets has quickly become a major concern and will hinder smartphone shipments in the coming quarters.

The global shortage of chips is quickly spreading across different industries from smartphones to cars. On average, a car has between 50 and 150 of the semiconductors, which are used in a growing number of applications, including driver assistance systems and navigation control.

In Vietnam, a slew of car brands from Toyota, Kia, Mitsubishi, Mercedes Benz, and Suzuki have been affected by the problem. Most recently, Mitsubishi Vietnam has postponed delivery of the Xpander units due to the shortages. Meanwhile, Suzuki Vietnam announced that the volume of its XL7 and Ertiga models imported from Indonesia will be limited in the next three months because of slower production.

Other electronics manufacturers are also getting slammed by such shortages. Dang Van Chung, plant manager of Ho Chi Minh City-based Datalogic Vietnam LLC operating in Vietnam for 10 years, told VIR that the company has been in short supply of semiconductors since the end of last year. Datalogic is currently specialised in designing and producing barcode readers, mobile computers, and sensors, as well as vision and laser marking systems.

“We are trying to negotiate with our customers because we can’t deliver full orders for them. Furthermore, the industry-wide supply shortage also results in higher expenses and logistics costs for manufacturers. However, Datalogic is making efforts not to increase prices while looking for alternative suppliers in a desperate bid to keep supplies flowing,” Chung said.

Nguyen Tu Quang, CEO of Vietnam’s technology corporation BKAV, also pointed out the reasons behind the global chip shortage. He noted that Huawei Technologies has stockpiled critical chips amid the US-China trade tensions to ensure the supply to Chinese carriers in their rollout of 5G technology. Other Chinese manufacturers, fearing similar treatment, followed suit.

At the same time, the problem became worse in light of the unprecedented demand for semiconductors during the pandemic. National lockdowns saw a massive surge in the demand for virtual office devices such as laptops and network peripherals as companies scrambled to accommodate their employees in the mass shift to working from home.

“To overcome the challenges, technology manufacturers like BKAV are racing to find foreign suppliers who have changed their business plans and may have available components for sale. This sale and procurement of chipsets and electronic accessories is happening all over in the market,” Quang said.

Many chip producers and suppliers have reported shortages, warning that the delivery time could be extended to over 10 months.

Semiconductor chips are used everywhere, from simple ones like Vietnam’s new identity cards to common household electronic devices such as televisions, refrigerators, induction cooktops, and rice cookers. Furthermore, Vietnam has the growing demand for chips given that the country is preparing to roll out 5G and accelerate digital transformation. Therefore, the global shortage will disrupt supply chains and the digital transformation efforts of Vietnam.

This multifaceted issue shows no signs of abating. In a recent blog, Glenn O’Donnell, vice president and research director at advisory firm Forrester, believed the shortage could last into 2023. “The PC surge will soften a bit in the coming year but not a lot. Data-centre spending will resume after a dismal 2020, and edge computing will be the new ‘gold rush’ in technology,” he said. “Couple that with the unstoppable desire to instrument everything, along with continued growth in cloud computing and cryptocurrency mining, and we see nothing but boom times ahead for the chip demand.”

To be proactive in the chip supply and avoid risks, Vietnamese telecom giant Viettel had the ambition to develop its semiconductors for the core networks for its 5G services, though it could be challenging for Viettel to realise this target as it requires accumulated efforts and years to bear fruit. Meanwhile, the company would need numerous different chips to build a reliable system.

Meanwhile, other foreign investors are looking to increasing chip production in Vietnam. Austrian chipmaker AT&S intends to develop two factories in Vietnam with an investment capital of nearly $1.8 billion in the first phase. Ingolf Schröder, director of AT&S, said that his company is confident it can implement the factory in a short time to serve the huge demand in the field. The chipmaker is hurrying to inaugurate its factory by the end of the year.

In January, Danang Hi-Tech Park Management Board also granted an investment certificate to the US’ Hayward Quartz Technology to develop a semiconductor factory with the total investment capital of $110 million in the central city. Hayward Quartz Technology is based in Silicon Valley and a leading supplier supporting all major original equipment manufacturers in the semiconductor segment.

Also, Intel Corporation has invested a further $475 million in Intel Products Vietnam. This new investment comes in addition to $1 billion of funding to build a state-of-the-art chip assembly and test manufacturing facility in Saigon Hi-Tech Park, which was first announced in 2006.