Shopping mall center near me

In its development strategy for 2021-2030, Vietnam Airlines and its subsidiaries will set aside resources to get involved in projects to develop and exploit infrastructure at the airport, providing services for itself and other carriers, the local media reported.

Of the required investment, 30% will be sourced from Vietnam Airlines and the remainder will come from loans.

Vietnam Airlines and its subsidiaries can either develop facilities at the airport or cooperate with the Airports Corporation of Vietnam to set up joint stock or limited liability companies to conduct the work.

The national flag carrier also proposed the competent agencies issue special policies for it and other members of the Vietnam Airlines Group, including Pacific Airlines and the Vietnam Air Services Company so that they can have enough infrastructure and land for their services at the airport.

At first, the air carrier expected to be allocated a dedicated area at the airport to build a hangar for aircraft maintenance.

According to the Civil Aviation Authority of Vietnam, Vietnam Airlines’ proposal is reasonable as ground services are associated with transport services. However, the airline must participate in the competitive tender process.

In line with the latest assessment, the retail price of E5RON92 biofuel witnessed an increase of VND 361 per litre to a maximum of VND16,309 per litre, while the price of RON95 rose by VND340 per litre to VND17,270 per litre.

According to the two ministries, petrol and oil prices in the global market have experienced an upward trajectory over the past 15 days, therefore causing the latest adjustments.

This is the fifth consecutive time the two ministries have hiked the domestic petrol and oil prices.

The ministries have also decided to increase expenditure for the petrol price stabilisation fund at the level of between VND181 and VND1,100 for all types of petroleum products.

The decision was made Thursday by the city Vice Chairman Duong Anh Duc after the southern metropolis went 14 days without any Covid-19 community transmission.

Under the latest decision, wedding centers, restaurants, movie theaters and other places of recreation would reopen next Monday.

Tourism activities, transportation, catering services, shopping centers, museums, historical relics and libraries are also allowed to reopen, but must ensure a minimum distance of one meter between two people.

Catering establishments are banned from accommodating more than 30 people.

City authorities have also allowed the organization of religious events but gatherings of more than 50 people at a time are banned.

Vietnam’s largest city has shut down all non-essential services since Feb. after recording a series of community transmissions linked to a cluster at the Tan Son Nhat International Airport.

Of the 36 community transmissions HCMC has recorded in the nation’s latest outbreak that began on Jan. 28, one is linked to Hai Duong Province, Vietnam’s current Covid-19 epicenter, and 35 with the airport.

Health authorities have said the outbreak in the city has been put under control. 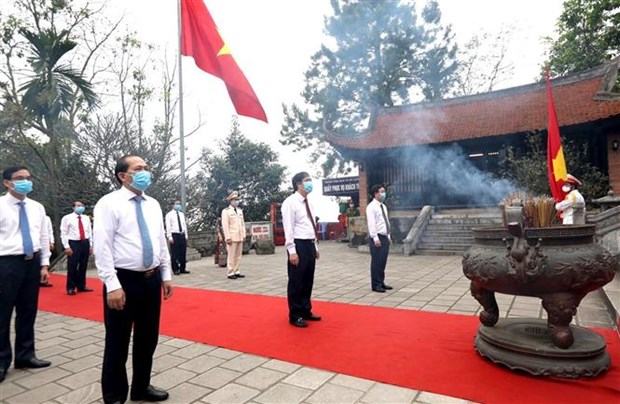 Visitors to the Hùng Temple Relic are asked to wear masks and keep their distance from others. — VNA/VNS Photo Trung Kiên

HÀ NỘI — The Hùng Kings Festival, which pays tribute to the founders and first kings of the nation, will be held similarly to last year, with ceremonial activities but no festivities.

The plans for the national major festival were decided at a meeting of the People’s Committee of the northern province of Phú Thọ where it is held annually.

Speaking at the meeting, vice chairman of the Provincial People’s Committee Hồ Đại Dũng said the event would take place in a respectful atmosphere, while strictly abiding by measures to prevent COVID-19 from spreading under the guidance of the Ministry of Health.

This is the second year the Hùng Kings Festival will include only ceremonial activities and no festivities.

According to Lê Trường Giang, director of the Hùng Kings Temple Relic Management Board, the temple received more than 20,000 visitors on the occasion of Tết (Lunar New Year).

“The measures to prevent the spread of the COVID-19 pandemic have been taken seriously at the historical site. At the same time, the visitors’ awareness has been much improved this year,” he said.

The Hùng Kings Temple Relic Complex covers more than 1,000ha, more than half of which is forest. The complex is scattered with dozens of temples dedicated to the legendary kings.

UNESCO placed the “Worship of Hùng kings in Phú Thọ” on the Representative List of the Intangible Cultural Heritage of Humanity on December 6, 2012,

The Hùng Kings Festival is held annually from the 8th to the 11th day of the third lunar month, which falls on April 19 to April 22 this year, as a tribute to the Hùng Kings who are credited with establishing the nation.

The main festival day, which is also a public holiday in Việt Nam, is on the 10th day or April 21. — VNS 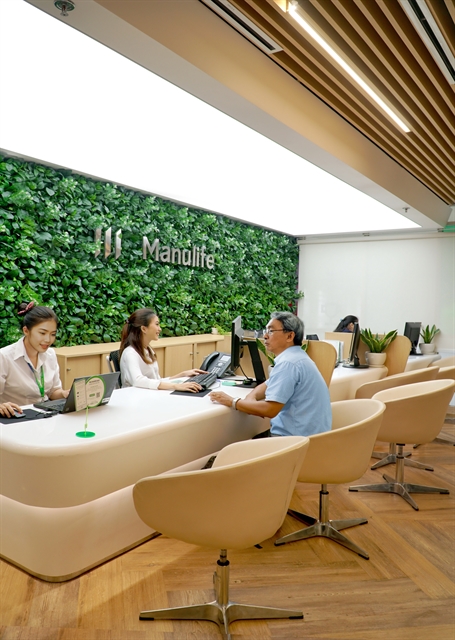 A year on since the Covid-19 pandemic first began Vietnamese are taking more control of their health and finance, driving greater interest in fitness and well-being along with insurance and retirement planning. — Photo courtesy of Manulife

HCM CITY — A year on since the Covid-19 pandemic first began Vietnamese are taking more control of their health and finance, driving greater interest in fitness and well-being along with insurance and retirement planning, as Asia looks to the longer-term impact of the disease, according to new research from Manulife.

The latest version of the ‘Manulife Asia Care Survey’ takes a closer look into customers’ concerns, priorities and aspirations, polling 4,000 people across the region who either own insurance or intend to buy it in the next six months, including around 520 in Việt Nam.

Nearly all (95 per cent) of those who worry most about Covid have made an effort on a personal level to improve their overall health, mostly through more regular exercise (58 per cent) and improved diet (54 per cent).

Almost everyone is self-monitoring health, and Vietnamese pay the most attention to the number of steps walked (44 per cent) among the four emerging markets covered in the survey, against a regional average of 38 per cent.

Three out of five (60 per cent) of Vietnamese also own fitness wearables, well above the regional average of 46 per cent.

A large majority of Vietnamese (79 per cent) also said retirement planning has become more important since Covid-19 started, below the Philippines (90 per cent), Indonesia (88 per cent) and Malaysia (83 per cent) but higher than all the developed markets.

The regional average is 73 per cent.

This high level of interest in retirement ties in with their concerns about personal wealth.

In Việt Nam, more than half (52 per cent) thought their personal wealth would decline as a result of Covid-19. The rate was only higher in Hong Kong (58 per cent) and Singapore (55 per cent).

Aligned with taking better control of health and finance is an interest to buy new insurance.

In Việt Nam, a remarkable nine out of ten (91 per cent) said they intend to buy new insurance in the next six months, higher than anywhere else in the region. The regional average is 71 per cent.

The Vietnamese respondents were most interested in life, hospitalisation, accident and critical illness cover.

Three quarters (75 per cent) of Vietnamese respondents, again more than anywhere else in the region, said they prefer to manage their policies through digital means such as mobile apps, including for claims and payment.

The survey found that 71 per cent of them had spoken to an agent about purchasing insurance, well above the regional average of 64 per cent, with only Hong Kong (77 per cent) and mainland China (76 per cent) scoring higher.

“While those digital habits are here for the long term, a good many still like to speak to their agents. This underscores the importance of our omnichannel approach, one that fully integrates digital, while maximising our human qualities of empathy, trust and a holistic understanding of our customers’ needs.” — VNS