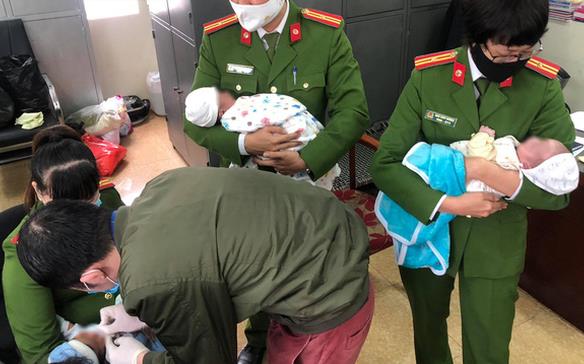 According to police, in 2019, Chung worked in Fujian Province, China, and met a man named Tính, who claimed to be from the central province of Thanh Hoá and served as a middle man to bring Vietnamese to China to work in factories.

Chung learned Tính had been selling Vietnamese infants to buyers in China and asked to be involved in the ring.

Chung was tasked with finding pregnant mothers who cannot afford to provide for the babies or those who want to put their babies for adoption, police said.

Via social media, Chung reportedly colluded with people identified only as Lương Ngọc and Hải Nga (whose identities remain unknown) to have these two people receive the pregnant women in the border province of Cao Bằng and then guide them to China through unofficial routes and hand them over to Tính.

From 2020 November to January 2021, Chung allegedly colluded with three Vietnamese people known only as Út, Loan and Sáu, and found seven pregnant women who wished to sell their babies – including one who had crossed over to China to give birth to the baby and sell it to Tính, two women who came to Cao Bằng Province but could not cross the border, and four others that they lost contact with.

On January 31, 2021, Chung rented an apartment in Hà Nội and worked with Ninh Thị Hải Yến to find four pregnant women. Two went to China to give birth and handed the babies to Tính while two had given birth but were waiting to bring their babies to China.

In addition, through his girlfriend Đặng Trương Đào Nguyên Anh, Chung learned about a woman in the southern province of Cần Thơ who was eight months pregnant and brought her to Hà Nội, waiting for the day to go to China.

Tính is thought to have paid Chung VNĐ66 million for this case.

This is a major infant trafficking ring that the criminal police has been following for a long time, Colonel Phan Mạnh Trường, deputy head of the Ministry of Public Security’s Criminal Police Department said.

The police raided locations related to the ring’s activities on Thursday night and rescued four babies that were about to be brought to China.

Four mothers have been arrested, including the eight-month pregnant woman.

The police also managed to identify two other expecting women who had been brought to China, Trường told the media.

The investigation is ongoing.  — VNS

Investigators said the two men, both Hanoi residents, had once sold their own kidneys and thus having experiences in the process and required procedures for illegal kidney trade.

The two relied on social media to source kidney donors and scouted hospitals to find patients in dire need of the organ.

Kidney donors were housed and looked after in rented premises in Hanoi while awaiting their operation.

In early February, the two traffickers agreed to sell kidneys to two patients at a hospital in Hanoi when apprehended by police.

More than five million people have chronic kidney disease in Vietnam, and 100,000 have to receive dialysis daily, official data shows.

Social insurance only funds the cost of dialysis, so those who need a transplant have to pay for it.

Then, those with kidney failure have to register to wait in line for a legal kidney, which normally takes several months or even more due to a serious donor shortage. This has prompted many kidney patients to gradually lose hope and turn to the black market. In many cases, donors and receivers have no information on each other.

In Vietnam, where organ donation is considered a taboo as many believe one should die wholly prepared for the afterlife, black market kidney transactions like Binh and Tien’s are not rare.

According to police, kidney traffickers usually conduct 30-50 deals per year.

Meanwhile, on the global gold market, spot gold on the Asian market in the morning of February 22 rose by more than US$13 an ounce compared to the closing price in the trading session last week. As the global gold price advanced but the domestic one dropped, the latter was now VND6.2 million per tael higher than the former, instead of VND7.5 million per tael higher in the last week.

On February 22, to help customers to lessen difficulties and overcome the Covid-19 pandemic, Vietcombank cut its interest rates for all existing loans and new loans of customers within three months, starting from February 22 to May 22 this year. Specifically, for corporate customers, Vietcombank reduced 10 percent of the interest payable for customers that have been negatively affected by the Covid-19 pandemic. The lender also lowered up to 5 percent on bank interest payable for its remaining Covid-19-affected customers.

The Hanoitimes – Vingroup is one of the most potential buyers for LG Electronics’ smartphone business.

The South Korean brand is considering all options for its loss-making mobile division that could include closing or selling off its business, according to Reuters in Seoul. The brand would be focusing resources on premium home appliance and automotive electronics.

Possible buyers are Vietnamese conglomerate Vingroup, Facebook, Volkswagen and Google, and Vingroup is one of the strong acquisition candidates, according to NewDaily.

VinSmart, Vingroup’s subsidiary, entered Vietnam’s smartphone market in 2018. It has been producing smartphones under an original design manufacturing (ODM) contract with LG Electronics. Although it hasn’t yet had a strong presence in the global smartphone market, in Vietnam, VinSmart’s smartphone outstripped Apple’s iPhone to reach the third place in terms of market share after Samsung and Oppo.

Until now, Vingroup has no comment on this. However, the group also revealed it will export 5G-enabled smartphones to the US this year. Last September, its subsidiary VinSmart exported the first batch of smartphones to this market and planned to assemble nearly two million units for its partner in 2021.

The ficus tree called “the throne of Vietnam” worth US$1milion has been known by domestic and international bonsai collectors and growers for a long time.

The owner of the tree is artisan Le Duc Nam, 46, from Ha Dong district in Hanoi.

Nam has recently been honored as an “Artisan of Southeast Asia”.

In the world of bonsai collectors and creators, the owners of super bonsai trees that are worth millions of US dollars can be counted on the fingers of your hand. Most of them are famous wealthy men who share a common passion for bonsai.

However, the owner of “the throne of Vietnam” fig tree is not a wealthy man. He did not pay millions of USD to buy this tree. Nam is a farmer born and raised in Dong Mai village, now Dong Mai ward in Ha Dong district, Hanoi.

Unlike owners of other million-dollar bonsai, Nam created the tree over a very long period.

He bought the tree for VND10 million nearly 20 years ago. With his own creativity, Nam blew his soul into the tree, turning it into a classic work, a symbol of the bonsai world.

By selling this tree, Nam immediately became a millionaire but he is still a bonsai maker who wanders the country and even goes abroad to curl bonsai trees for wealthy men.

However, Nam is not a normal bonsai maker because he does not make bonsai for money only.

Why is the fig tree named “the throne of Vietnam”? Nam has never explained it. But, those who understand him will know his intentions: It is the desire to preserve art works made by the Vietnamese people. It is a symbol of pride, and something to “compete” with others in the international arena.

“If I needed money, I would have sold it a long time ago, and would have been a billionaire for a long time, but I will never sell it. I want to keep this work with me because it is my copyright, my own wisdom. It is the product of a process of conquest. That work has healed many wounds literally and figuratively for me,” said Le Duc Nam.

The bonsai garden owned by Mr. Dang Hong Son in Thanh Tri District is considered the largest of its kind in Hanoi, with nearly 1,000 unique bonsai trees of over 100 species from many regions throughout the country.

Vietnam’s stock market ended mixed on Tuesday morning with the benchmark VN-Index increasing slightly at the end of the session.

Nearly 460.6 million shares were traded on HoSE in the morning session, worth VND11.9 trillion.

During the morning session, the market faced strong selling pressure, resulting in losses of many big stocks. However, it recovered some of the losses at the end of the session.

Big stocks witnessing losses were Vingroup JSC (VIC), down 1.11 per cent, Vietnam Dairy Products JSC (VNM), down 0.47 per cent, JSC Bank For Investment And Development of Vietnam (BID), down 0.11 per cent and Vietnam National Petroleum Group (PLX), down 0.68 per cent.