Security in a box

The Ministry of Information and Communications (MIC) has launched the “Review and remove malware nationwide in 2020” campaign to enhance the country’s network security.

The campaign aims to reduce the malicious code infection rate by 50 per cent. It also aims to cut the number of Vietnamese IP addresses in 10 popular botnets – a collection of internet-connected devices infected by malware that allow hackers to control them – in half.

It would also take Việt Nam out of reports on malware infection rates.

The ministry has clarified cyber safety and security a prerequisite for e-government development and digital transformation.

The campaign will allow people to use malware prevention software for free via https://khonggianmang.vn.

A representative from the ministry’s Department of Information Security said the campaign is for businesses and home network systems and equipment. The group accounts for the majority of the IP addresses.

The campaign would also contribute to improving the country’s reliability in e-transactions, thus promoting socio-economic development and contribute to ensuring national defence and security.

The department would co-operate with VNPT, Viettel, CMC, FPT, BKAV and Kaspersky to implement the campaign.

The campaign would assess 10 major botnets that need to be treated with priority, build and deploy tools on a large scale, whereby users get free downloads to inspect and remove malicious code from their computers.

“After the campaign, we will evaluate results and plan to implement future campaigns,” the department said.

The campaign has been implemented in all provinces and cities from the local to the central level, through specialised IT units of ministries, branches and localities, State groups and corporations, commercial banks and financial institutions.

In addition, it has also received support from organisations, corporations and major security firms such as Kaspersky, Group-IB, FireEye, F-Secure and ESET.

The campaign has been implemented gradually. The ministry hopes it will achieve positive results, contributing to clean malware from Việt Nam’s cyberspace. This will help ensure safety for transactions of agencies and enterprises, as Việt Nam is accelerating digital transformation towards the development of digital government, digital economy and digital society, it added. — VNS

In August this year, the Department of Information Security recorded 517 cyber attacks on information systems in Việt Nam (199 phishing cases, 160 deface attacks and 158 malware attacks), falling 0.77 per cent over the previous month. The number of Vietnamese IP addresses in botnet networks is over 2 million, a decrease of 0.03 per cent compared to July. The number of recorded cyber attacks, warnings and the number of botnet IP addresses showed a slight decrease in the last three months.

The decrease was due to the department continuing to strengthen the recording, warnings and instructions on information security.

However, cyber attackers have still taken advantage of concerns about the pandemic to increase the spread of malicious code. The number of IP botnets compared to the same period last year was still at a high level. 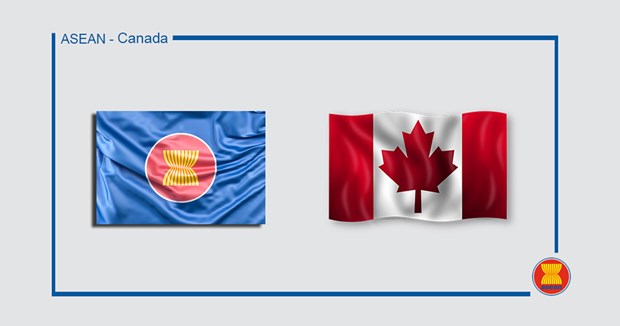 Jakarta (VNA) – ASEAN and Canada reaffirmed commitment to strengthening cooperation under their new Plan of Action 2021-2025 in areas of mutual interests at the 9th ASEAN-Canada Joint Cooperation Committee (JCC) Meeting via videoconference.

In this spirit, the meeting agreed to deepen collaboration in the areas of trade and investment; micro, small and medium enterprises (MSMEs) development; public health; innovation including entrepreneurship and start-ups; digital economy; education; gender equality; women, peace and security; and connectivity. cooperation programmes such as; the Canada-ASEAN Scholarships and Educational Exchanges for Development (SEED); the Canada-OECD Project for ASEAN SMEs (COPAS); and the “TRIANGLE in ASEAN initiative” to promote safe and fair labour migration. 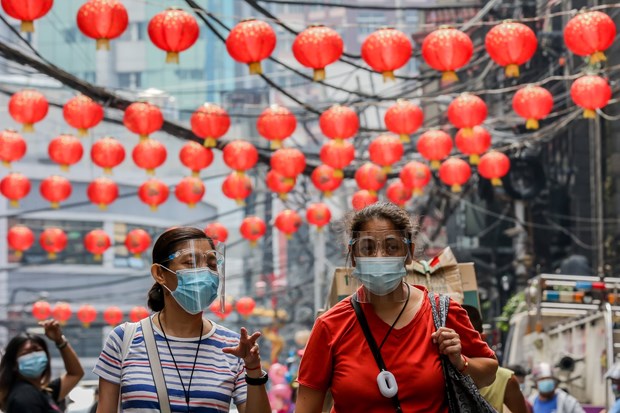 People wear masks in the Philippines to guard against COVID-19 (Source: Xinhua/VNA)

Hanoi (VNA) – Philippine President Rodrigo Duterte has extended partial lockdown in the capital until the end of March, as the country awaits the arrival of COVID-19 vaccines.

In a statement on February 27, spokesperson of the Philippine President Harry Roque said the decision follows a report of 2,651 new virus infections, the highest daily increase in more than four months.

The Philippines will be the last in the region to get its first shipment of vaccines, comprising 600,000 doses of Sinovac Biotech’s vaccines donated by China, to be delivered on February 28, and earmarked for healthcare workers and military troops. The country has the second largest numbers of COVID-19 cases and deaths in Southeast Asia. Health Ministry on February 27  announced the establishment of a security sub-committee to oversee all quarantine facilities nationwide.

As of morning the same day, Cambodia recorded a total of 766 infection cases./.

The Hanoitimes – Vietnam said people must always be placed at the center of all dialogues and trust-building measures in Myanmar.

Vietnam’s Permanent Representative to the UN Ambassador Dang Dinh Quy has called on international efforts to assist Myanmar’s democratic transition with an aim to ensure the people-centered approach.

The support, including that from ASEAN, needs to respect the independence, sovereignty, and internal affairs of Myanmar while securing humanitarian access and essential services to local people, mostly vulnerable ones, Quy said at the United Nations General Assembly’s informal meeting on Myanmar held on February 26.

He urged stakeholders to exert restraint, avoid escalating tensions and seek dialogues towards satisfying solutions, which are in line with the constitution, laws and people’s aspiration.

He asked UN Special Envoy on Myanmar Christine Schraner Burgener and representatives of 50 members of the UN and eight regional organizations to coordinate with ASEAN in stabilizing the situation in Myanmar.

Kyodo News has reported that Foreign Ministers of ASEAN member states will hold a special meeting on March 2 to discuss the situation in Myanmar.

It would be the first of such meeting of the 10-member bloc since Myanmar’s military declared a state of emergency and detained leaders, including U Win Myint and Aung San Suu Kyi on February 1.

Myanmar has seen an outpouring of anger and defiance from hundreds of thousands of protesters who have gathered to call for Suu Kyi’s release and a return to democracy.

Hundreds of anti-coup protesters who have rallied daily in the country’s largest city against a junta that toppled civilian leader Aung San Suu Kyi have been dispersed by police, AFP reported. 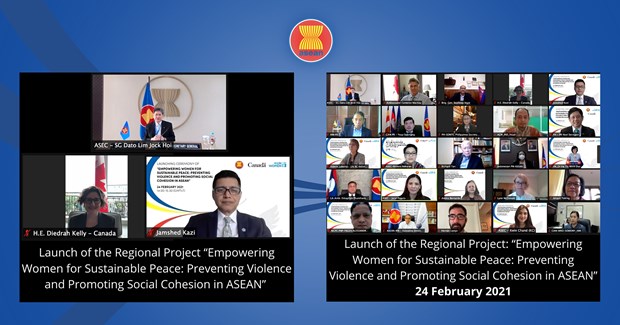 At the launch of the “Empowering women for sustainable peace: preventing violence and promoting social cohesion in ASEAN” (Photo: asean.org)

The 8.5 million CAD (6.36 million USD) programme, “Empowering women for sustainable peace: preventing violence and promoting social cohesion in ASEAN”, is funded by Global Affairs Canada to support ASEAN and the implementation of the ASEAN-Canada Plan of Action 2021-2025, with the support of UN Women as a lead UN partner.

“ Canada is proud to launch this flagship initiative that uses the women, peace and security approach to promote inclusive and sustainable peace and security in the region, while addressing the systemic gender inequality,” said Diedrah Kelly, Canada’s Ambassador to ASEAN .

Secretary-General of ASEAN Dato Lim Jock Hoi said, “ASEAN is working concertedly to advance women, peace and security agenda across the three ASEAN Community Pillars as part of our commitment to promote gender equality and the roles of women in the implementation of the ASEAN Comprehensive Recovery Framework.”

The COVID-19 impact has increased the risks for women and girls in fragile and conflict-affected contexts and this challenges us to re-examine threats to human security. “The pandemic highlights the important linkage between peace, humanitarian and development and the critical need for women’s leadership and participation to ensure effective and comprehensive response, from policy decision-making to peace building and pandemic response,” said Jamshed Kazi, UN Women Representative and Liaison to ASEAN.

The new programme reflects the commitment of ASEAN and Canada to promote gender equality and to respond to an increasingly widespread call across the globe for women to be empowered to lead and participate in peace and development. 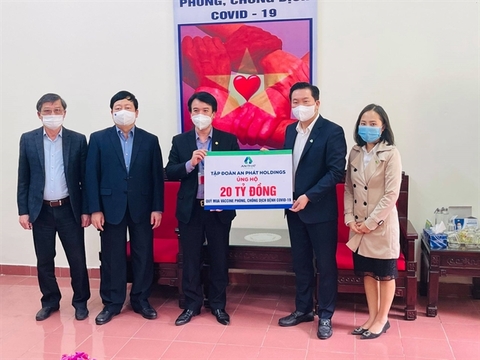 Nguyen Duc Tuan (Third from the left) – Chairman of the Viet Nam Fatherland Front Committee of Hai Duong, received VND20 billion from An Phat Holdings. — Photo courtesy of the group

An Phat Holdings (APH) has handed over VND20 billion (US$851,000) support to the northern province of Hai Duong buy vaccines for in the fight against COVID-19.

This is also the biggest donation that An Phat Holdings has made to Hai Duong Province in pandemic prevention. Pham Van Tuan, the group’s Acting Deputy CEO said: “In the situation of urgent need to have vaccines, helping people feel secure and helping the government to control the pandemic early is not only the responsibility of An Phat Holdings but also other organizations and individuals who want to contribute.”

Hai Duong is the key production area of the group with 10 plants, many subsidiaries and 3,500 employees.

Along with the community support, it always complies with preventive measures at all locations as well as performing COVID-19 tests on all employees.

In early 2020, since the outbreak of COVID-19 in Ha Noi, An Phat Holdings also donated products to 300 residents and soldiers on quarantine duty in Truc Bach Area and 5,000 medical masks and hand sanitizers to the Viet Nam Embassy in the US. — VNS