Whilst it is natural to be wary of undergoing the quarantine process, it remains vial to not harm or undermine the efforts of the community and country, Deputy PM Dam said during an ongoing conference held between the Government and centrally-run localities in Hanoi.

This comes after a group of six Vietnamese people illegally entered the nation through the border with Cambodia on December 24. Upon their detection, four of the individuals have since tested positive for the SARS-CoV-2 virus, while hundreds of people who came into contact with these cases have been placed into quarantine for medical surveillance.

With the source of virus infections mainly coming from outside the country, it remains vital for the nation to tighten its management of borders, according to the Deputy PM. In line with this, it is also important to set up a system so people can provide information regarding illegal entries.

The Deputy PM also pointed out that concentrated quarantine work has not been carried out in a serious manner in several localities following a novel coronavirus (COVID-19) infection being detected at a quarantine facility in Ho Chi Minh City last month.

According to the Deputy PM, those who complete their 14-day quarantine period as regulated will also have to self-isolate and undergo medical observation at home to ensure they are free of COVID-19.

“Even though we have vaccines, we are unlikely to carry out a massive vaccination campaign until the summer of 2021,” Deputy PM Dam warned. “We have no other choice but to strictly implement preventative measures.”

He cited statistics, indicating that approximately 70,000 Vietnamese people stranded overseas due to the impact of the COVID-19 pandemic have been repatriated under the Prime Minister’s instructions.

An additional hundreds of thousands of Vietnamese citizens also aspire to return home, with the number expected to keep rising ahead of the upcoming Lunar New Year holiday, which is just over a month away, said Minister Lam.

According to the police minister, a large number of Vietnamese people based in China and Cambodia will attempt to cross the border and enter the country in the near future, making it vital to strengthen border management.

The Hanoitimes – Securities trading organizations should refrain from offering services in consulting, brokering, issuing or transacting crypto currencies, according to the State Securities Commission of Vietnam (SSC).

In a statement, the commission said the move is aimed at protecting investors as Vietnam currently does not have a legal framework to manage and deal with electronic money, virtual assets and currencies.

Deputy Prime Minister Vuong Dinh Hue has asked the Ministry of Justice and the State Bank of Vietnam (SBV) to quickly complete the legal framework and report to the government. The documents should be presented to the  government for consideration by the end of the month, according to the SBV.

The statement also referred to business activities of Fintech firms with regard to the fundraising method through initial coin offering (ICO), as well as other activities in relation to Vietnam’s stock market.

At present, there is a growing trend in Vietnam for Fintech firms to raise capital through ICO, crowdfunding or peer-to-peer lending. However, these activities pose high risks with no law available for protection.

Virtual currencies, especially bitcoin, have sparked fever worldwide. In Vietnam, the bitcoin drew significant market attention despite experts’ warning about its risks and the lack of a management framework.

On October 30, 2017, SBV said virtual currencies are not a lawful means of payment, therefore, “as from January 1, 2018, the act of issuing, providing and using illegal means of payment (including bitcoin and other similar virtual currency) may be subject to prosecution in accordance with the provision of Article 206 of the Penal Code 2015”, SBV said in a  statement released on October 28.

As a ministry-level body of  the government responsible for managing monetary policies, supervising financial institutions and keeping the country’s foreign reserves, SBV urged citizens and enterprises to refrain from making transactions in bitcoin and other crypto currencies.

Given its extreme volatility and lack of regulation, crypto currencies in general and bitcoin in particular can pose potential risks to investors. On the other hand, as explained by the SBV, bitcoin transactions are anonymous and can be used for money laundering, drug trafficking, tax evasion and illegal payments.

China and South Korea recently announced moves to tighten the management of bitcoin. Vietnam could be the next country to issue strict regulations on crypto currencies.

The detaining of the suspect comes immediately after he was caught in the process of attempting to illegally smuggle four Chinese nationals into the nation at the Chi Ma border gate in Loc Binh district at approximately 11 p.m. on December 28.

Once under questioning at the border post, 42-year-old Phuong Van Bac of Tu Mich commune in Loc Binh district of Lang Son province confessed to being hired by a Chinese man for the task of bringing the four Chinese men into the country.

Bac added that he would have been paid VND4 million, equivalent to US$174, providing that all of the Chinese nationals had successfully entered the country.

Furthermore, each of the Chinese nationals were immediately put into quarantine in Lang Son province in accordance to relevant novel coronavirus (COVID-19) pandemic containment measures. 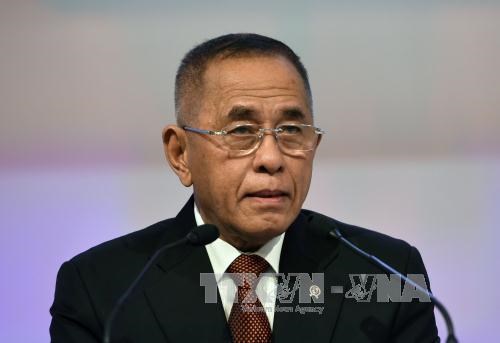 
Sydney (VNA) – Indonesia has lobbied countries in the Association of Southeast Asian Nations (ASEAN) to carry out maritime patrols in the East Sea to strengthen security.

Indonesian Defence Minister Ryamizard Ryacudu made the statement at a joint press conference in Sydney on March 16 after talks with Australian Foreign Minister Julie Bishop and Defence Minister Marise Payne ahead the ASEAN- Australia Special Summit.

Minister Ryacudu said he has gone around to ASEAN defence ministers so that each country that faces the East Sea patrols around 230 kilometres.

Indonesia is focusing on the Sulu Sea and the Malacca Strait as well as cooperating with Thailand, Malaysia, Singapore, Vietnam, Cambodia and the Philippines in the field, he added.

ASEAN countries have secured almost half of the East Sea that they are patrolling, according to the minister.

The same day, Indonesia and Australia signed a navigation cooperation agreement, including economic and security development, prevention of illegal fishing, and sustainable management of natural resources.-VNA

The Hanoitimes – The petroleum sector holds a significant role in the country’s development, not only in terms of economy, but also in national defense and security.

Prime Minister Nguyen Xuan Phuc stressed the view in a government meeting discussing a draft decree on finance management of PetroVietnam on March 3, noting any changes must be in compliance with the Petroleum Law and other regulations.

According to Phuc, the petroleum sector holds a significant role in the country’s development, not only in terms of economy, but also in national defense and security.

“Bearing that in mind, government agencies should create more favorable conditions for the sector’s development, especially in the search for new oil and gas fields, as well as promoting market demands for petroleum-related products [fertilizer, electricity],” Phuc said.

The PM requested the Ministry of Finance to revise and perfect current regulations on retrieving funds from unsuccessful oil prospecting projects for new oil and gas fields, including a uniform risk mechanism.

Phuc set the deadline for the submission of the draft decree on March 20, expecting improved conditions for the use of state capital at PetroVietnam to ensure the state-run firm’s growth in the future.

Despite difficult economic climate in 2020, PetroVietnam paid over VND83 trillion (US$3.62 billion) to the state budget.

The Hanoitimes – People have been advised to keep away from the crowd and wear medical masks.

Vietnam’s Ministry of Health (MOH) has warned residents to avoid the crowd if unnecessary in the context that the number of new coronavirus (nCoV)-caused infections has risen to eight in the country.

The ministry has advised residents to wear medical masks when they are outside and to keep distance with people at risks of nCoV-caused respiratory sickness.

The ministry has issued a number of document guiding the prevention and control of the nCoV and instructions how to wash hands and wear medical masks correctly.

Meanwhile, residents have been aware of protecting themselves from the epidemic by avoiding crowds and wearing medical masks for schoolchildren in classes.

Notably, the ministry announces two national emergency lines namely 19009095 and 19003228 that provide free calls for information relating to the nCoV and 21 hotlines at 21 hospitals across the country.

In another move, the Vietnam Social Security has announced that they will facilitate the payment for people covered by health insurance in the checkup and treatment of nCoV-caused respiratory sickness.

As of February 3, Vietnam has confirmed eight individuals infected with the coronavirus, including two Chinese men, four Vietnamese citizens coming back from China’s Wuhan City, one American who transited in Wuhan, and one Vietnamese receptionist who had contacted with the infected Chinese nationals.

So far, the epidemic has spread to 27 countries and territories, being confirmed in 17,389 people, including 184 outside China, causing 362 deaths including one outside China (in the Philippines).