HÀ NỘI — The former director of Bạch Mai Hospital and seven other people have been accused of price gouging medical equipment.

Police, under the Ministry of Public Security, want to prosecute the group over alleged ‘abuse of power and position’.

Nguyễn Quốc Anh was the director of the Hà Nội hospital when the alleged wrongdoings took place.

According to the investigation agency, the actions of former leaders of Bạch Mai Hospital and BMS as well as the appraisal unit, have resulted in an increase in the cost of medical examinations and treatment.

In July 2009, Anh was appointed Director of Bạch Mai Hospital. In order to enhance prestige for the hospital and increase income for health workers, Anh has set up specialised surgery departments.

It is alleged Tuấn met Anh to discuss providing a robotic system to the hospital with the price of VNĐ39 billion and VNĐ44 billion for two pieces of robotic equipment.

At the meeting, Anh is alleged to suggest that Tuấn create a joint venture project to install the devices at the hospital.

During the implementation process, Anh and some former staff members of the hospital did not comply with state regulations.

All eight people accused reached an agreement to issue an illegal valuation certificate determining that the price of one robot be VNĐ39 billion.

The investigation agency concluded that Anh played the main role and the remaining suspects were his accomplices.

During the investigation, the accused were made aware of the criminal acts and have returned the money that they illegally appropriated.

Tuan has returned VNĐ10 billion while Anh handed in VNĐ100 million and US$10,000 and Hiền returned VNĐ150 million. — VNS 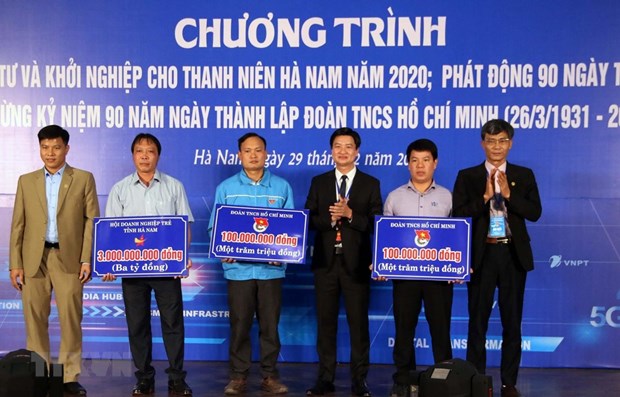 Hanoi (VNA) – The Ho Chi Minh Communist Youth Union (HCMYU) at all levels around the country mobilised more than 73 billion VND (3.16 million USD) to support thousands of start-up projects from young people during the Youth Month 2021 .

The figure was reported by the HCMYU Central Committee in Hanoi on April 23 in reviewing Youth Month in March.

According to the committee, among the projects, many were launched by students at universities and colleges.

During Youth Month 2021, 36,000 volunteer activities were held with the engagement of more than 1.3 million youngsters, helping repair nearly 2,000 km rural roads and build 4,100 km of new roads, along with 230 rural bridges.

At the same time, some 3,700 employment consultations were provided to more than 610,000 youngsters.

At universities and colleges, 244 start-up clubs were set up for students. Meanwhile, more than 13,700 activities were held to care for 680,000 children, including nearly 4,500 sessions teaching 320,000 children how to swim and equip them with knowledge on preventing child abuse.

During the month, 35,000 young people were introduced to become Party members, 6,700 of whom have been admitted./.

A district court in southern Vietnam has sentenced a woman to two years in prison for using social network accounts to subvert the Party and State.

The People’s Court of Binh Thuy District, Can Tho City, on Thursday handed down the jail term on 45-year-old Le Thi Binh, a local resident, for “abusing democratic freedoms to violate the interests of the State, as well as the lawful rights and interests of organizations and individuals,” following the amended 2015 Criminal Code of Vietnam.

As stated in the indictment for the defendant, Binh possessed many Facebook accounts, including ‘Binh Le,’ ‘Le Ngoclan Ct,’ ‘Ngoc Lan CT Ngoc CT Le,’ and ‘Anna Nguyen,’ and used them as a means to spread wrongful information.

Binh frequently used the Facebook accounts on her Internet-connected mobile phone to host live streams while also publishing and sharing many posts that defamed and offended Party and State bodies and leaders from October 2019 to November 2020.

During their investigation, Binh Thuy police collected and seized a lot of evidence related to Binh’s offenses, including 47 video clips shared on her Facebook accounts.

All the posts Binh uploaded to Facebook were aimed at propagandizing reactionary thinking and viewpoints, maligning Party and State agencies and leaders, and even abolishing the country’s current political regime, according to the indictment.

Binh’s acts infringed laws, violated the State’s interests as well as the legitimate rights and interests of organizations and individuals, and adversely affected social order and security, the court concluded.

A crocodile left multiple bites on a toddler’s hand in the Mekong Delta province of Bac Lieu after the baby boy had put his hand into the farmed animal’s cage earlier this week.

Thanh Vu Medic General Hospital in Bac Lieu said on Thursday that the health of three-year-old D.T.D. from the province’s Hong Dan District has reverted to stable conditions after he was treated for crocodile bites.

D. was admitted to the hospital on Wednesday with the wounds on his right hand bleeding severely though the baby boy had been given first aid at a local hospital.

According to D.’s family, he came close to and put his right hand through the bars of the wide cage where the family raised a crocodile.

The animal then attacked D.

According to his X-ray and ultrasound results, there were a total of ten wounds on D.’s hand and fingers.

The wounds did not damage the baby’s bones and tendons.

D. has been injected with antibiotics and remained at Thanh Vu Medic General Hospital for doctors to monitor if any infection develops on his bitten hand.

Working with a 3-dimensional computer model of “Trix”, a female T. rex skeleton at the Dutch Naturalis museum, researcher Pasha van Bijlert added computer reconstructions of muscles and ligaments to find that it’s likely that the dinosaur’s preferred speed was 4.61 kms (2.86 miles) an hour, close to the walking pace of humans and horses.

In an article on the movement of dinosaurs in the Royal Open Society Science journal, Van Bijlert and his co-authors said T. rex’s huge tail played an important part in its locomotion.

They looked at how the animal would achieve a natural frequency of movement, factoring in not only leg muscles as in previous studies but also tail movement, that would minimize the amount of energy used.

“The tail would sway up and down with each step (like a giraffe’s neck). If the step rhythm and tail natural frequency were matched, the tail would resonate, maximizing energy storage,” Van Bijlert said on Twitter.

However, it’s too soon to assume a human could have outrun a T. rex: the researchers said they were looking at the fearsome predator’s walking pace and still researching its possible top speeds.

There’s also no possibility of it being put to the test as the species died out more than 60 million years before people appeared on Earth.