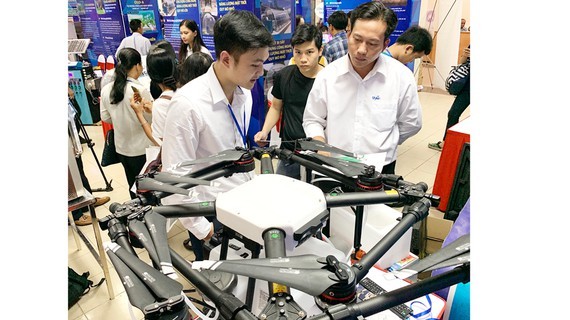 Self-propelled aircrafts to carry out agricultural tasks are on display in a technology exhibition in HCMC. (Photo: SGGP)

More importantly, since the risk acceptance rate in scientific study is rather low, many complicated regulations have been introduced, greatly discouraging researchers.

To amend the situation, the Deputy Prime Minister suggested that there must be transparency in all stages of a research process, from considering topics, conducting the research, collecting counter-arguments, and interpreting results. This criterion must be applied to scientific-technological activities in educational institutes, research centers, local areas via close monitoring of the community as well as scientists in the fields.

Another proposal is for the Ministry of Science & Technology (MOST) to more effectively use financial and other resources, to introduce practical research topics, to consider universities as a knowledge center which directly receives research orders and funding from MOST.

So far, the national innovative system with businesses as its core has been activated, achieving significant results. Yet in general, Vietnam’s preparedness for production in Industry 4.0 is still quite weak. The country needs stronger mechanisms for economic accounting, tax incentives, capital, resources allocation so that businesses can realize profits in their investment into science-technology and human resources training.

The human resources in science-technology need improvements as well. Minister of Science and Technology Huynh Thanh Dat shared that there must be suitable mechanisms and policies to promote the development of the scientific staff, with great respect for the special feature of this innovative work.

He added that the management task must focus more on fostering research for feasible solutions to tackle current issues in the community. Also, the quality and impact index of scientific articles, the commercialization possibility of research results must be considered carefully. New policies and innovative models should be encouraged to pilot in real life.

The Minister suggested an increase in public-private partnership between the State and businesses and a rise in state budget to carry out scientific research, develop advanced technologies in the nation. Besides transparency, independence, and critical thinking in choosing suitable research topics, autonomy should be promoted among research doers, along with corresponding responsibilities, under the monitoring of the community.

Investments into scientific activities should based on healthy competitiveness with a clear focus, performance evaluation index. Research topic selection procedures should be flexible, simple. Financial settlement should go along with international practices and minimize administrative burdens for scientists.

Possession of research results with state budget should be given to the research leaders so that they are more enthusiastic in finishing the process and commercializing those results. 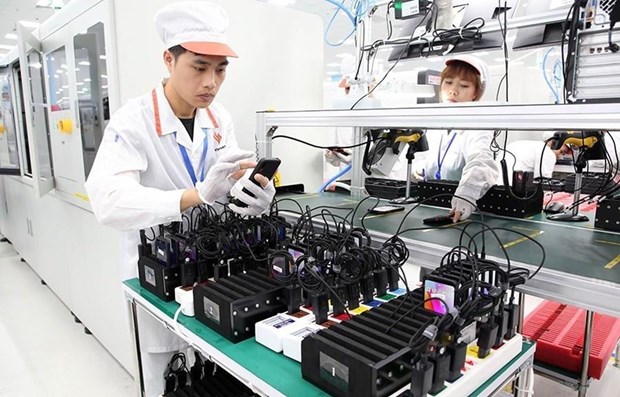 Hanoi (VNA) – Deputy Prime Minister Vu Duc Dam said at working session with the Ministry of Science and Technology on April 13 that breakthroughs in science-technology are needed for the country to gain speed in development.

Deputy Minister of Science and Technology Le Xuan Dinh reported at the meeting that science and technology has contributed greatly to national development, as seen in the growing contribution of the total factor productivity (TFP) to national economic growth, from an average 33.6 percent in the 2011-2015 period to 45.2 percent in the 2016-2020. The country’s Global Innovation Index (GII) was ranked 42nd among 131 countries and territories, third in ASEAN and topped the group of nations with the same level of income.

Investment in science-technology now comes from both the State budget (52 percent) and businesses (48 percent) instead of relying entirely on the State like 10 years ago./. 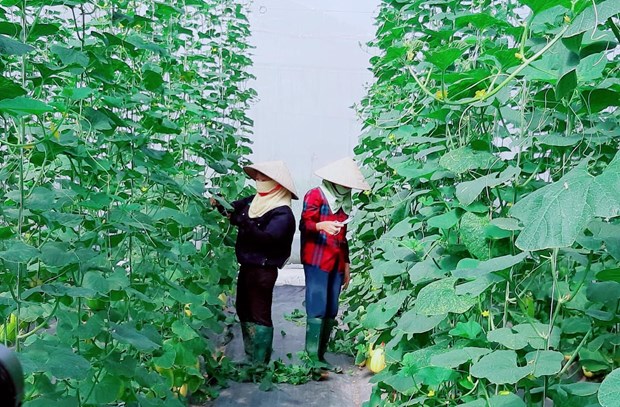 Bac Giang (VNA) – The Ministry of Science and Technology (MST) and the People’s Committee of Bac Giang province have recently held a conference in Bac Giang city to review the five-year implementation of a programme on supporting the application and transfer of scientific and technological advances to boost socio-economic development in the rural, mountainous and ethnic-inhabited areas in the 2016-2025 period ( Mountainous Rural Area Programme ).

MST Deputy Minister Nguyen Hoang Giang, Vice Chairpersons of the People’s Committees of Bac Giang, Thai Binh, Dong Thap, Gia Lai and Lang Son provinces, and representatives from the Departments of Science and Technology of 55 provinces and cities, along with scientists attended the event.

The conference aimed at assessing the results of the implementation of the programme so as to put forward orientations to carry out the programme in the 2021-2025 period.

The mountainous and ethnic-inhabited areas, which account for over 60 percent of the country’s total area, hold a special importance in terms of socio-economy, defence and security, and have great potential for development.

However, at present, the development of the mountainous and ethnic-inhabited areas has yet to match their role, position and potential. Therefore, one of the most important solutions is to apply scientific and technological advances in production and daily life.

After five years of implementation, the Prime Minister-approved programme has created bright spots in the application of science and technology advances in production, thus bringing about socio-economic efficiency and boosting socio-economic development in the rural, mountainous and ethnic-inhabited areas.

To date, 400 projects have been approved and carried out in 61 provinces and cities with a total investment of over 3 trillion VND. The projects have been implemented in numerous fields such as cultivation, husbandry, aquaculture, preservation and processing technologies. Once completed, the projects are expected to build over 1,300 application models, transfer over 2,100 new technologies, train and increase the management capacity for 1,800 managing officials and over 3,500 technicians, and train over 78,000 farmers to help them receive and master technologies.

However, the implementation of the programme is facing several difficulties and shortcomings in making and issuing documents, in funding, in project management, and in maintaining and duplicating models and projects. 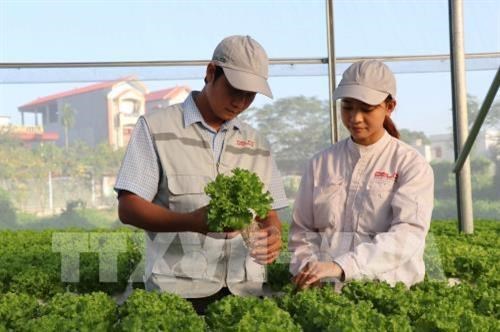 Director of Bac Giang provincial Department of Science and Technology Nguyen Thanh Binh said that several projects of the programme have to adjust locations and production scales and have shown slow progress.

Projects with regional connectivity and linkages between organisations, businesses and producers are still lacking, while investments are low and the progress of disbursing investments remains slow, Binh added.

Delegates proposed clarifying the management function of Departments of Science and Technology, speeding up the approval, assessment and provision of investment of projects, issuing support policies and mechanisms, and encouraging the duplication of the results after the projects are completed.

Deputy Minister Giang stated that the programme basically achieved the targets set out until 2020. To fulfill all targets for 2025, he asked relevant ministries, sectors and localities to seek more suitable measures in organizing and choosing projects and technologies for each field, supplement and adjust the legal corridor to facilitate the implementation of the programme, build plans for the implementation for each year and for the entire 2021-2025 period, and push organisations in charge of technology transfer to implement projects effectively.

Local Departments of Science and Technology needs to advise local People’s Committees in how to propose and carry out projects in accordance with development policies, while organisations that take charge of implementing the projects and support technology transfer should coordinate closely and mobilize resources to successfully carry out the projects and duplicate the successful models./.

Deputy Minister of Science and Technology Le Xuan Dinh reported at the meeting that science and technology has contributed greatly to national development, as seen in the growing contribution of the total factor productivity (TFP) to national economic growth, from an average 33.6% in the 2011-2015 period to 45.2% in the 2016-2020. The country’s Global Innovation Index (GII) was ranked 42nd among 131 countries and territories, third in ASEAN and topped the group of nations with the same level of income.

Investment in science-technology now comes from both the State budget (52%) and businesses (48%) instead of relying entirely on the State like 10 years ago. 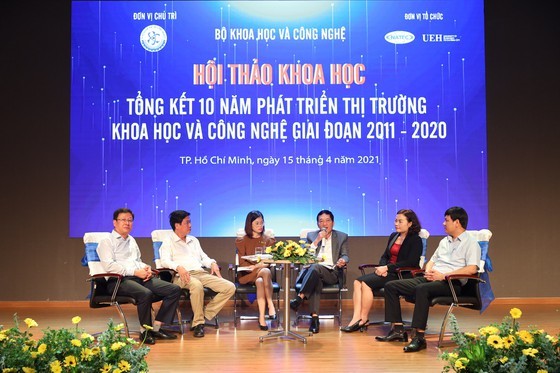 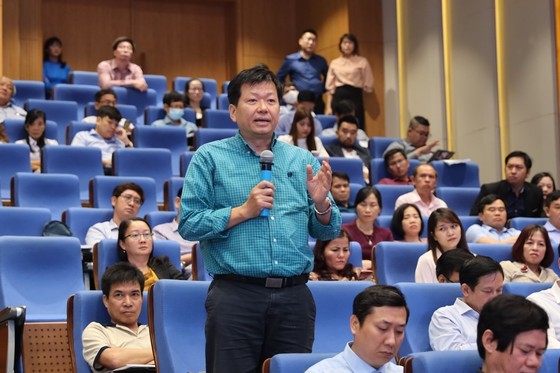 Thousands of scientific studies and reports on high-tech applications in active preventive medicine are published each year. Doctors typically rely on a database of physical conditions, genetic resources and lifestyle attributes to analyze and offer health and youthful aging solutions.

In 2002, Autologous Immune Enhancement Therapy (AIET) was adopted by the Biotherapy Institute of Japan (BIJ) to support thousands of patients. AIET has also been applied to healthy individuals to improve immune systems, prevent cancer and viral diseases like influenza, hepatitis B, C, etc.

For stem cell technology, a new medical achievement in the past century, scientists have made tremendous progress in research and application in support of disease treatment. For instance, mesenchymal stem cells from adipose tissue are applied for the purpose of rejuvenation, repair and replacement of aging and damaged cells, treatment of hormonal depletion and physiological problems.

Reports from the International Society for Sexual Medicine also affirm the use of this therapy in supportive treatment of erectile dysfunction.

Ozone has been applied in major hospitals worldwide, including Japan, Germany, and France. According to the database of the National Library of Medicine (PubMed), as of May 2020, more than 3,300 articles and 37 studies have examined the ozone application in detoxifying blood, increasing bodily resistance, treatment of the cardiovascular, gastrointestinal, genitourinary, and nervous systems, head and neck, skeletal muscles, subcutaneous tissue and peripheral vascular disease.

On the basis of the health examination database, which exploits information on the history and lifestyle of individuals, doctors will flexibly apply appropriate methods to each case.

Approved by the Ministry of Health to apply autoimmune therapy to support cancer treatment since 2018, Vinmec is ready to research and apply this therapy for the goal of preventing and improving health for all people.

In its program “Biological Horoscope,” the hospital employed the largest DNA database on Asians to assess general health, the risk of cancer, chronic disease, and drug allergies, etc.

Vinmec Tissue Bank is also conducting research on storing and isolating mesenchymal stem cell cultures from adipose tissue, a “discarded” product after cosmetic liposuction, for use in treatments, including beauty therapy.