A few days ago, the Vietnamese packaging sector was shocked by the news that Duy Tan decided to sell 70 per cent of its stakes share to SCG after many years of negotiation.

The two sides remain silent about the particulars of the deal. Nevertheless, according to a source of doanhnghieptiepthi.vn , SCG plans to initially purchase 70 per cent of five of Duy Tan’s 22 subsidiaries which focus on plastic and packaging.

Last year, along with the investment in Bien Hoa Packaging JSC, SCG also acquired UK-based Go-Pak Ltd., one of the leading foodservice providers in England, Europe, and North America which also has many manufacturing facilities in the southern part of Vietnam.

Over the years, SCG has been constantly pouring capital into the country. As of the end of last third quarter, its total investment in Vietnam reached nearly $4.2 billion, up 59 per cent on-year. With this figure, SCG has been one of the leading overseas investors in Vietnam, along the likes of Samsung, Lotte, LG, Intel, and Microsoft.

In comparison with the region, the Vietnamese packaging industry has great potential for growth. According to the Vietnam Packaging Association (VINPAS), the sector’s annual growth could reach up to 15 per cent, as much as a triple of the regional growth rate, which is about 4-5.5 per cent annually.

Meanwhile, the Thai packaging industry in on a decline, reflected by the decelerating annual growth figures. According to ResearchandMarket.com , the compound annual growth rate of the sector in 2018-2023 is forecast to be 3 per cent, while in previous years it was about 5 per cent.

“Decline in packaging will be largely influenced by the fall in the demand for tobacco and tobacco products,” noted the website.

Last April, the Thai packaging manufacturer also lowered the investment budget of the year to cope with the COVID-19 lockdown. Nevertheless, the company did not cut the budget for Long Son Petrochemicals complex worth $5.4 billion in Vietnam.

“The Vietnamese economy will continue to expand during the COVID-19 outbreak and this project will serve demand growth in the domestic market in the future,” said Thammasak Sethaudom, SCG’s chief financial officer to Bangkok Post . 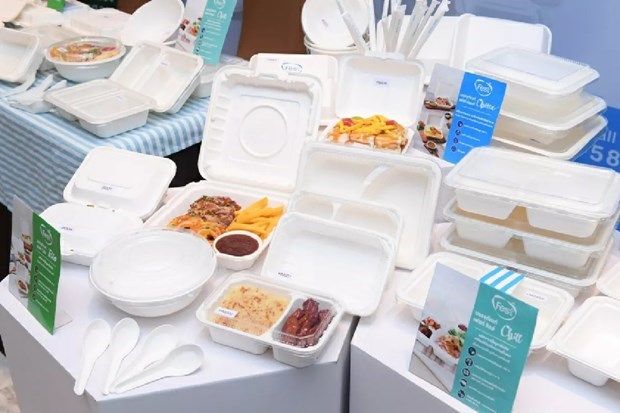 SCG Packaging is one of the leading packaging businesses in Thailand (Photo: Komchadluek)

Bangkok (VNA) – Thailand ’s SCG Packaging (SCGP) is joining hands with its Vietnamese partners under an investment worth 10 billion THB (334 million USD) to expand its packaging solution business in Vietnam, where demand for packaging products is growing.

The latest move is the signing of a share purchase agreement on February 9 to acquire a 70 percent stake in the Duy Tan Plastics Manufacturing Corporation, Vietnam’s top producer of rigid plastic packaging products , according to its letter sent to the Stock Exchange of Thailand.

The purchase will be made through the SCGP’s wholly-owned subsidiary and further transaction details will be provided in the middle of this year.

“SCGP is prepared to work with all partners to share experience and knowledge in the development of integrated packaging solutions and support the growing demand for diverse types of packaging among customers in ASEAN,” Wichan was quoted by the Bangkok Post as saying.

The 10 billion baht is part of 20-billion-baht investment budget the SCGP announced last month for business expansion and merger and acquisition plans.

Earlier in 2009, the  SCGP established Vina Kraft Paper in the Vietnamese southern province of Binh Duong to produce packaging paper, with total production capacity of 500,000 tonnes per year.

In 2015 the company invested in the Tin Thanh Packing Joint Stock Company (BATICO), one of the five largest flexible packaging producers in Vietnam.

The company also acquired 94.11 percent stake in the Bien Hoa Packaging Joint Stock Company (SOVI), a producer of corrugated paper and offset laminated packaging in Vietnam, with an annual total capacity of 100,000 tonnes.

According to Wichan, all three projects expand SCGP’s production base for downstream products in Vietnam and are expected to contribute sales of an additional 8.5 billion baht per year.

The SCGP is also seeking opportunities for business expansion in paper production capacity in northern Vietnam to serve demand within the country./.

SCG Packaging Public Company Ltd (SCGP) said in a statement the deal, whose value it did not disclose, is expected to be completed in mid-2021.

Duy Tan is Vietnam’s largest producer of rigid plastic packaging products such as shampoo and food containers, of which it sells 80 percent locally and exports the rest to the U.S. and some other countries.

It also makes plastic housewares products and has a total annual capacity of 116,000 tons. Last year it earned revenues of VND4.7 trillion ($204 million).

The investment in Duy Tan is part of SCGP’s expansion across Southeast Asia. It has 43 packaging plants in Vietnam, Indonesia, Malaysia, the Philippines, and Thailand.

It plans to invest 10 billion baht ($333 million) in its Vietnamese packaging solutions business.

Chief executive Wichan Jitpukdee said the company has consistently been increasing its investment in Vietnam, achieving revenue growth of more than 10 percent a year.

In December, it acquired a 94 percent stake in Bien Hoa Packaging , a producer of corrugated paper and offset laminated packaging.

In 2015, it had invested in Tin Thanh Packing Joint Stock Company, one of the five largest flexible packaging producers in Vietnam.

In 2009, it had established Vina Kraft Paper in Binh Duong Province to produce 500,000 tons of packaging paper annually.

SCG Packaging (SCGP), a Thai group, announced to acquire 70% stake in Duy Tan Plastics Manufacturing Corporation (Duy Tan), a producer of rigid plastic packaging in Vietnam, as part of its plan to invest more US$334 million in the country.

It is expected that SCGP’s acquisition will be completed in the first half of 2021. Duy Tan manufactures household plastic containers with a capacity of 116,000 tonnes per year.

The company’s increased investment in Vietnam is in line with its strategic plan, which foresees an increase in the diversity of products, including plastic and paper packaging, as well as the development of domestic design teams, according to Wichan Jitpukdee, CEO of SCGP.

“We are prepared to work with all partners to share experience and knowledge in the development of integrated packaging solutions and support the growing demand for diverse types of packaging among customers in ASEAN,” Jitpukdee added.

During the past decade, the Thai company has continuously increased investment in Vietnam, which has yielded a revenue growth of more than 10% annually.

All three projects of the company in Vietnam including Vina Kraft Paper Co., Ltd. in the southern province of Binh Duong, the packaging producer Tin Thanh Packing JSC and Bien Hoa Packaging JSC are expected to contribute to its increased sales of about 8.5 billion baht (US$283.1 million) per year.

The Thai company is also looking into expanding its paper production capacity in the north of Vietnam. “This is to satisfy domestic demands and expansion of export markets, which will be a boon to Vietnam’s economic growth as well,” Jitpukdee said.

After 10 years of lengthy internal competition, South Korean Lotte Corporation will fully divest Bibica, selling 44.03 per cent or 6.8 million shares and making The PAN Group the largest shareholder in the Vietnamese confectionery maker.

The PAN Group has been vying for controlling stakes of Bibica to retain the Vietnamese confectionery brands in the market amid the aggressive expansion of foreign confectionery products.

In 2014, Kinh Do sold 80 per cent of its confectionery business Mondelez International, making it the biggest deal in the history of Vietnam’s confectionery industry. After five years of deals, KDC is making its comeback, resurrecting its snack business under the KIDO brand and rolling out its first moon cake products last year.

Meanwhile, Thai cement giant SCG Group has completed the acquisition of its seventh packaging company in Vietnam, Bien Hoa Packaging JSC, at a cost of VND2.07 trillion ($89 million). This purchase was commenced through a subsidiary of Thai Containers Group Co., Ltd. (TCG), a 70/30 joint venture between SCG and Japan’s Rengo Co., Ltd.

The mergers and acquisitions (M&A) market has been buzzing with activity in retail, consumer goods, real estate, food and beverage sectors, in which growth is driven by the country’s large population and expanding middle-income class. However, the increasing number of deals comes with concern that Vietnamese brands may fade away once foreign investors buy into local companies.

Samuel Son-Tung Vu, partner at law firm Bae, Kim & Lee Vietnam, told VIR that there are many successful M&A deals conducted by global players which help to expand domestic brands to the global market. “An acquisition by international investors may create opportunities for domestic brands to reach out to the world and find a way to become global brands,” Vu said.

For instance, the popular Corona beer brand initially only targeted the domestic Mexican market. However, after AB InBev took over Grupo Modelo in 2012, Corona has grown from a local Mexican player to a global brand.

Likewise, after ThaiBev acquired a majority share in Saigon Beer Alcohol Beverage Corporation (SABECO), the Vietnamese company entered into a sponsorship agreement with Leicester City Football Club to promote the Bia Saigon brand on the team jerseys of for the 2018/19 English Premier League season. The effectiveness of these strategies is yet to be fully seen, but there is hope that Bia Saigon can one day become a global brand.

Vu added that corporate restructuring through M&A transactions, such as SCG in business to business enterprises, are common activities among enterprises in the global market. In addition, domestic enterprises have a better understanding of the market and habits of consumers. Therefore, domestic enterprises should focus on developing their brands and products in order to create resonate with consumers and promote brand awareness.

With the support of major players such as Masan, the products have accessed markets through Masan’s nationwide distribution channels; accordingly, brand awareness has been expanded.

Speaking at the Vietnam M&A Forum 2020, Masan Group’s general director Danny Le stated that 25 years ago the group focused on the seasoning segment. “After that, we saw the potential in consumer goods so we decided to branch into the instant noodle and beverage segments,” Le stated. “Masan pursues M&A deals of potential brands to expand its product portfolio. Our acquisitions are aimed to expand its distribution network as well as build strong local brands in the domestic market.”

Similarly, Vinamilk also seeks to acquire the Moc Chau Milk brand from GTNFoods as a way to expand operations and market share in order to increase competitiveness.

According to Brand Finance, Vietnam was the fastest-growing nation in 2020 in brand value, skyrocketing to $319 billion. Emerging as a Southeast Asian haven for manufacturing, Vietnam defies the global trend, with its brand value up an impressive 29 per cent.

Vietnamese brands are clearly attractive to foreign investors. However, to avoid any conflicts related to brand development post-M&A, Vu suggested that foreign investors create a deep understanding on products, brands, and habits of consumers in the market.

Foreign investors should also focus on developing competitive distribution channels and smart, local marketing campaigns, consistent with the tastes of consumers. “A clear and market-relevant development strategy is a key factor in consolidating and developing corporate brand and intangible assets to find its own position in the market become a major player,” Vu stated.

It is one of the largest firms in Southeast Asia and among the first to invest in Vietnam after the Law on Foreign Investment was amended in 1992.

Compared to companies from Europe, South Korea and Japan, those from Thailand have a geographical advantage while the two countries’ cultures are similar.

According to a note on the industry by brokerage FPTS Securities, the majority of large firms are foreign-owned.