Textile company Tien Son Thanh Hoa (AAT) will be listed on March 24 with nearly 35 million shares at VND10,600 each.

With the new listing, the main bourse will see its total market cap increase by VND20.8 trillion ($902.76 million).

The listings are expected to create more pressure on HoSE’s 20-year-old system which has suffered frequent overloads due to a surge in the number of investors.

A number of tickers on HoSE are set to be temporarily moved to the Hanoi Stock Exchange (HNX) while the former works to upgrade its system, which could take until the end of the year.

HoSE has also proposed that the minimum trading lot be increased from 100 to 1,000 to reduce the number of transactions.

Since the beginning of the year HoSE has listed 10 new stocks, accounting for a third of the total last year.

The Hanoitimes – A 1,000 minimum trading lot will limit the participation of small investors, while the stock market is moving towards fairness and equality.

The Vietnam Association of Securities Businesses (VASB) has expressed concern over a proposal of the Ho Chi Minh City Stock Exchange (HOSE) in raising the minimum trading lot to 1,000 shares to ease the overload issue.

“The way out for such issue is to upgrade HOSE’s trading system, and the state authorities should speed up the process as soon as possible,” VASB’s Vice Chairman Phan Quoc Huynh told tinnhanhchungkhoan.vn .

According to Huynh, a 1,000 minimum trading lot would limit the participation of small investors, while the stock market is moving towards fairness and equality.

Huynh referred to opinions from some securities firms as saying that the move would cause negative impacts on Vietnam’s stock market.

Meanwhile, a higher minimum trading lot may cause a sharp decline in the trading volume for stocks of firms with large market capitalization in the context of unchanged stock value, said Huynh.

“With expensive stocks, investors may have to spend hundreds of million dong to buy the minimum 1,000 shares,” he said.

Chairman of SSI Securities Corporation Nguyen Duy Hung on his social account gave a more positive view on HOSE’s proposal, saying the trading system would be on the brink of collapse without appropriate measure.

Hung said the overload of orders that forces the stock exchange to halt market trading is the result of a rapid-growing stock market that outpace the processing capacity of the stock market, as such, “a long-term solution is a must,” he suggested.

He estimated a 1,000 minimum trading lot could reduce 40-50% of the total transaction volume, while taking the liquidity to a new level.

In another move, the State Securities Commission of Vietnam (SSC), the country’s stock market watchdog, has instructed the Hanoi Stock Exchange (HNX) to process transactions of stocks from the HOSE as another solution to ease the latter’s overload issue.

However, an option to move to the HNX would not apply for stocks under the VN30 Index, comprising 30 largest stocks on the HOSE.

The new change was set to take effect from March 3, 2021 until further instruction from the SSC.

Both before and after the Tet holiday, the overload occurred repeatedly on HOSE whenever liquidity in a trading session hit around VND14-17 trillion (US$608-738 million).

On the Ho Chi Minh Stock Exchange (HoSE), the benchmark VN-Index decreased by 26.52 points, equivalent to 2.23 per cent, to 1,160.43 points. The plunge was due to selling pressure across all sectors.

The index has kept falling in the morning and bouncing back later in recent sessions.

The market breadth was negative with 378 stocks falling, while 80 stocks climbed.

The large-cap tracker VN30-Index also dropped sharply in the morning session. The index slid 2.51 per cent, equivalent to over 30 points, to 1,165.59 points. Of the VN30 basket, 29 stocks declined while only one stock rose.

The only stock witnessing growth was Vingroup JSC (VIC), up 0.28 per cent.

HCMC – The benchmark VN-Index of the Hochiminh Stock Exchange closed in negative territory today, March 4, as order placing activities were slowed down due to a system error which has recently occurred on the bourse, especially in the afternoon.

Turnover on the HCMC market improved over 6% in volume and 10% in value over the session earlier at more than 670 million shares and some VND16.8 trillion. Block deals contributed around VND1.5 trillion to the total value.

Meanwhile, a host of speculative stocks made gains, including FLC, PVD, PVT, SCR, GEX, and DCM. Of them, property group FLC saw over 23.6 million shares transacted. Also, TLH, TGG, and DQC were among outstanding winners as they hit their upper limits.

In contrast to the southern bourse, trading on the northern bourse was upbeat. The HNX-Index added 1.67 points, or 0.66% versus Wednesday at 255.77. Notably, oil and gas stock PVS soared a whopping 8.4% and was the most actively traded stock on the Hanoi market, with over 27 million shares traded. 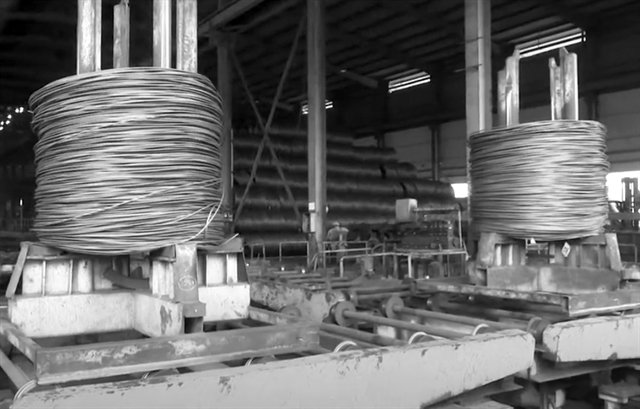 Pomina’s steel production plant. Pomina shares rose more than 6 per cent on Thursday despite a drop of the VN-Index. — Photo www.pomina-steel.com

HÀ NỘI — Việt Nam’s stock market ended mixed on Thursday as the VN-Index continued its downward trend in the afternoon session while the HNX-Index reversed its morning course.

Today’s result ended the index’s current movements that fell in the morning but still finished higher at the end of the session.

The market breadth stayed negative till the end of the session with 362 stocks falling, while 95 stocks climbed. And the market’s liquidity was high as VNĐ16.8 billion was poured into the southern bourse, equivalent to a trading volume of over 673.4 million shares.

Rising selling pressure and trading issues made many big stocks across all sectors fall sharply today, with the VN30-Index, which tracks the performance of the 30 biggest stocks on HoSE, down 1.78 per cent to 1,174.29 points.

Besides Vingroup JSC (VIC) ending flat, the rest of the VN30 basket posted poor performance. In the morning session, VIC was the only stock in the basket to witness a gain.

Top five stocks dominating the market’s trend were in real estate, banking and materials sectors, including Vinhome JSC (VHM), down 1.48 per cent, Techcombank (TCB), down 3.22 per cent, JSC Bank For Investment And Development of Việt Nam (BID), down 2.4 per cent, Vietcombank (VCB), down 1.12 per cent and Vietnam Rubber Group – JSC (GVR), down 2.87 per cent.

Nearly 176.1 million shares were traded on the northern market during the session, worth over VNĐ2.79 trillion.

Foreign investors continue to net sell on HoSE and HNX. While the investors withdrew VNĐ229.65 billion out of the southern market, they net sold a net value of VNĐ13.51 billion on HNX. — VNS

The index started off in the green before dipping by nearly 28 points starting at around 10.40 a.m. while a slight recovery in the afternoon was unable to bring it back to the starting point. It closed with a 18.43-point drop, ending a chain of five consecutive gaining sessions.

Many investors reported overloads on the bourse even in the morning. There were times when buy orders were delayed for two or three minutes, they said.

The VN30 basket, comprising the 30 largest capped stocks on the HoSE, saw 29 stocks in the red. VIC of biggest conglomerate Vingroup was the only ticker with no price change at VND106,900.

They were followed by five banks, including TPB of private TPBank, down 3.7 percent, STB of Ho Chi Minh City-based lender Sacombank, down 3.4 percent and TCB of the largest private lender Techcombank, down 3.2 percent.

Foreign investors were net sellers for the 10th session in a row to the tune of VND229.6 billion, with the strongest pressure on VNM of dairy giant Vinamilk, VIC and VCB of state-owned lender Vietcombank.