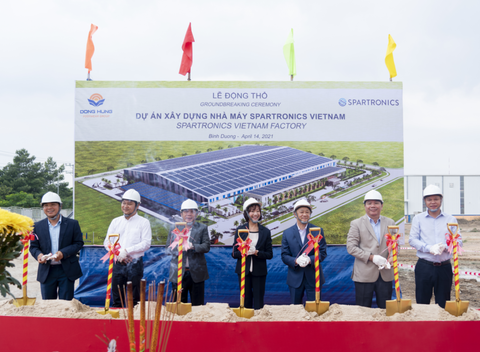 Spartronics LLC, a manufacturer of complex electronic and electromechanical devices, broke ground on a new facility in Binh Duong Province.

With solar rooftop, the 270,000 sq.m. facility will expand the company’s capacity for state-of-the-art electronics manufacturing services in Viet Nam. Located in the Nam Tan Uyen Industrial Park of Binh Duong Province, the new facility is scheduled to open in March 2022.

“The new facility demonstrates our long-term commitment in Viet Nam, helping to maintain customers’ high expectations for product and service quality and contribute to driving growth along with the increase of customer in Viet Nam,” he said.

HCMC – The Ministry of Health this evening, April 23, confirmed six fresh Covid-19 patients who were placed in quarantine upon their arrival in Vietnam, raising the country’s tally to 2,830 cases up to now.

They included four Vietnamese citizens, one Filipino sailor, and one Indian expert, said the ministry.

Among them, a Hanoian returned home from Japan on April 8 and is under medical treatment at Danang Lung Hospital. The Filipino sailor traveled from China to Ba Ria-Vung Tau Province on April 18 and is being treated at a local medical center in this southern province.

The Indian expert flew from India to Vietnam through Cam Ranh International Airport in Khanh Hoa Province on April 20, transiting Dubai and South Korea. He is receiving medical treatment at the Khanh Hoa Province Hospital for Tropical Diseases.

Besides this, a resident of An Giang Province’s An Phu District entered the country through Long Binh border gate in this Mekong Delta province on April 20. He is being treated at An Phu District Medical Center.

Another patient came back home from Russia on April 18 through the Cam Ranh airport. She is under treatment at the Khanh Hoa Province Hospital for Tropical Diseases.

The remaining patient, residing in Hanoi, flew home on April 21 from Japan and is being treated at Cu Chi field hospital in HCMC.

To date, 2,490 coronavirus patients in the country have fully recovered, while 35 others had died of the respiratory disease.