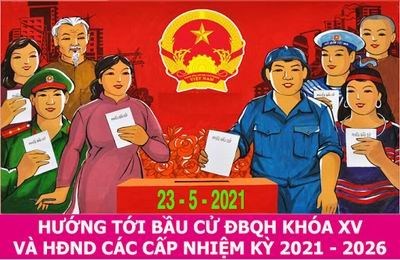 Hanoi (VNA) – A contest for Vietnamese citizens all over the world to study current regulations on elections of deputies to the National Assembly and People’s Councils will go online from 0:00 on April 1 to 24:00 on April 30.

The event, to be held by the Ministry of Justice in collaboration with the National Assembly Office, is part of the activities in response to the upcoming election slated for May 23.

Besides, it aims to raise public awareness of the significance of the elections, while promoting IT application into law popularisation and education.

Each contestant is allowed to do the test three times to improve the results.

Europe’s drug regulator on Wednesday found a possible link between AstraZeneca’s COVID-19 vaccine and rare blood clotting issues in adults who had received the shot and said it had taken into consideration all available evidence.

“One plausible explanation for the combination of blood clots and low blood platelets is an immune response, leading to a condition similar to one seen sometimes in patients treated with heparin,” the European Medicines Agency (EMA) said.

The findings come as a major hurdle in the global fight against the pandemic and a shift in the stance of the regulator, which had last week backed the vaccine and said there was no increased risk of blood clots in general from the shot.

It is also a blow to AstraZeneca, which was a frontrunner in the race for making an effective vaccine against COVID-19 ever since it began working with the University of Oxford.

The EMA’s safety committee, which was assessing the vaccine, has requested for more studies and changes to the current ones to get more information.

The new rules stipulate that the GSP certificate of origin will be issued by traders for each consignment and valid for 12 months from the date of issue.

If not issued at the time of export, the GSP certificate of origin can be issued later and written with a “retrospective statement”.

The retrospective statement must be submitted to the customs authorities of the importing country within two years of the date of import.

In addition, the regulations also provide that GSP entry documents are issued for many export consignments if the goods are not assembled or disassembled in accordance with the harmonised commodity description and coding system or exported for assembly.

The GSP certificate of origin must have information on the registration export system (REX) Code, merchant, goods and declaration content in English or French or Spanish.

Within three working days from the date of issuance, traders shall declare and post the document certifying the origin of goods under the GSP and documents related to exported goods lot as prescribed on the website of organisations receiving REX registration codes.

Organisations accepting the REX registration code must notify relevant authorities of the revocation or cancellation of the certificate of origin under the GSP.

For exports with a total value of less than 6,000 EUR (6,800 USD) calculated on the factory price, traders can certify the origin of the export lot without registration of the REX code.

The certificate of origin under the preferential tariffs of the EU, Norway, Switzerland and Turkey will apply from January 1, 2019.

Over the past year, defense agencies and military units have well observed military regulations, practiced training with military regulations with high sense of awareness of military personnel, and maintained regularity building, gradually meeting the requirement of building a revolutionary, regular, elite, and gradually-modernized military.

From July 16 to August 30, over 4,500 troops from 67 under-ministerial defense agencies and military units will join examinations of line-up regulations and individual unarmed regulations.

To make the examination successful, General Cuong asked related agencies and units as well as the organizing panel, and jury to seriously embrace the examination’s requirements with absolute safety.

He also asked defense agencies and military units to ensure personnel for the check and exert all efforts to achieve the best results.

Prime Minister Nguyen Xuan Phuc has directed relevant agencies to amend the regulations on certification of professional titles of teachers.

The local media, including VietNamNet, has reported problems related to the regulations on the use of training certificates for public employees, especially teachers of public training institutions, in promotion exams and appointment to professional titles of public employees.

On March 19, Minister and Chairman of the Government Office Mai Tien Dung signed a document to the Ministry of Home Affairs and the Ministry of Education and Training, which ordered the two ministries to submit reports on the issues to the Prime Minister.

Accordingly, Prime Minister Nguyen Xuan Phuc requested to consider amending and supplementing Decree 101/2017 of the Government on training and retraining of cadres, civil servants and public employees and other relevant regulations.

Related ministries were asked to propose specific plans and report the issues to the Prime Minister in March.

Using this regulation, the Government Office and the Supreme People’s Court will coordinate in the building of e-Government, e-Courts as well as administrative procedure reform. In particular, the two sides will support and closely coordinate in the building and completion of the institution to create a full legal environment for the implementation of E-Courts;consulting and sharing experiences in the process of developing projects on information technology application, e-Government development and E-Courts.

The Government Office will advise onand support the application of information technology in the administration and management of records, documents and the implementation of work on the electronic environment of the court system,connecting with the national text communication axis to serve the sending and receipt of electronic documents within the court system and with state administrative agencies at all levels.

This is also the basis for the Government Office to improve the quality of advice and assistance to the Government and Prime Minister in directing and administering administrative reform work, building e-Government and the digital government, economy and society.

The two sides were urged to complete the ecosystem to serve people and businesses in the electronic environment through promoting the online public service provision of the court sector on the National Public Service Portal, creating a useful foundation for e-businesses and e-citizens – one of the most important tasks in the successful implementation of national digital transformation.