Cancelations and modifications accounted for over 33 percent of orders last month, according to data from the exchange.

But investors are unhappy with the proposal for obvious reasons.

Another solution the exchange is considering to deal with its chronic overload is increasing the minimum price increment to “reduce the number of transactions.”

But to do this, it needs to bring over experts from Thailand to modify the system source code, which was written by them, a difficult task since no one wants to be quarantined for two weeks in Vietnam and another two weeks in Thailand on return.

Le Hai Tra, CEO of HoSE, said a new trading system would be tested over the next four months or so.

The exchange has also received approval from the State Securities Commission of Vietnam to move some of its stocks to the Hanoi Stock Exchange (HNX), home to small and mid-cap companies.

But no company has yet volunteered to make the switch.

The Hanoitimes – Many Vietnamese people traveled thousands of kilometers from different parts of India to gather in New Delhi for the repatriation flight.

Nearly 340 Vietnamese nationals were brought home on May 20 from India, the first ones repatriated from one of the countries with the toughest lockdown measures.

The repatriation flight took place as India is struggling with the rising infections of coronavirus that hit more than 112,000.

To make the flight possible, the Embassy of Vietnam in India had cooperated with different agencies to get travelling permits amid tightened lockdown throughout India.

Vietnamese Ambassador to India Pham Sanh Chau told Zing that the embassy had to hire three domestic flights to gather Vietnamese nationals at New Delhi for the repatriation flight.

He said the passengers had come from three flights and 66 coaches from 15 states across India before reaching New Delhi.

The passengers who are children under 18, the elderly, the sick, pregnant women, students whose dormitories closed, monks and nuns, Buddhist followers attending meditation courses, stranded visitors, workers of expired visa, and people on temporary mission.

Due to the severe outbreak, all passengers and crewmembers wear personal protective gear.

Earlier on May 18, two attendants of national flag carrier Vietnam Airlines tested positive with the coronavirus after a repatriation flight from Russia.

Due to the global increasing lockdown, Vietnam has been making efforts to repatriate its citizens.

The Hanoitimes – The revival of the aviation industry was a result of efforts by the government and the tourism industry to stimulate domestic travel.

With the social distancing orders loosened on April 23 after Covid-19 was contained, airports in Vietnam became busier in May, with air passengers jumping 14.3-fold from a month earlier to a total of 2.88 million.

The revival of the aviation industry was a result of efforts by the government and the tourism industry to encourage businesses to offer promotional packages that stimulate the demand of domestic travelers while borders remain closed to foreigners.

However, compared to the May 2019, the number of passengers fell 70% due to the suspension of foreign entry and travel restrictions to curb the spread of Covid-19, according to the Civil Aviation Authority of Vietnam.

In particular, Vietnamese airlines transported 78,000 international passengers and 2.8 million domestic passengers in May.

On May 25, the government decided to issue e-visas for citizens of 80 countries from July 1. This would lay a foundation for welcoming foreign tourists again.

Vietnam is expected to be the first countries in the world to open up to foreign tourists, according to WeSwap, the UK’s largest P2P travel money provider.

Vietnam has had one of the lowest cases and death rates in the world, despite sharing a long border with China. The country has had just over 320 cases and zero deaths. It has gone 41 days without community infection as of May 26.

He made the request at a yesterday meeting with the city’s Food Safety Management Board upon the implementation of task for 2021. Speaking at the meeting, Head of the Management Board Pham Khanh Phong Lan said that the board in close coordination with other competent agencies achieved its goals affirming to try their best in carrying out mission.
With regard to inspection over pharmaceutical sector, the Department of Health’s cooperation is needed in term of supervision of medicine businesses. For instance, over 6,500 existing private drug stores in the city all announced they had been checked before when inspectors of the Food Safety Management Board paid visits to.
She was concerned about advertisement, prices and origin of medicines; therefore, in the next time, the management board inspectors and their peers from the Department of Health together will continue paying visits to drugstores to check these above -mentioned problems.
On his part, Deputy Chairman Duc said nutritional supplements are more and more common nowadays; worse, many drugs have turned out to be nutritional supplements which had been advertised to treat various illnesses at high prices whereas its quality is dubious. Accordingly, the Food Safety Management Board must tighten control over these items for the health of city dwellers.

By Thanh An – Translated by Anh Quan

Mozambican Foreign Minister Verónica Nataniel made the statement during a working session held alongside Vietnamese Ambassador to Mozambique Le Huy Hoang on November 23, with the event taking place as part of activities to mark the 45th anniversary of diplomatic relations between the two countries.

During the meeting, the Minister Nataniel stated that she hopes Vietnam will continue to share its experience that it has learned from these successes in order to help her nation make faster progress in terms of the process of regional and international integration.

Minister Nataniel also expressed her great appreciation for the nation’s impressive achievements over recent years, considering the country to be a model that needs to be learned from in terms pandemic prevention and socio-economic development.

She went on to affirm that the Mozambican side has always placed great importance on its relationship with the nation and hopes that both sides continue to tighten their friendship and co-operation ties across a variety of fields, especially in the exchange of experts on agriculture and education and health care. She also anticipates that the country will continue to encourage businesses in order to intensify their investment in the East African nation.

She therefore suggested that both sides join hands in preparation for the fourth meeting of the inter-governmental committee, and arrange a visit to Vietnam for Mozambican President Filipe Nyusi as soon as possible.

In response, Ambassador Hoang conveyed a message of congratulations from Deputy Prime Minister and Foreign Minister Pham Binh Minh to Mozambique on their achievements in its role as the Chair of the Southern African Development Community (SADC).

The two sides compared notes on measures aimed at boosting the bilateral traditional friendship, including the sharing of experience in terms of external affairs at regional and international forums. This comes as Mozambique gets ready to run for a non-permanent seat at the UNSC for 2022 to 2023 period.

The Ambassador also told the press that following the meeting, Mozambique can be considered one of the African nations which the country has been able to maintain close ties with in recent decades.

With an investment capital of US$600 million, the Movitel telecom joint venture in Mozambique that has received investment by Viettel Military Telecom Corporation is currently the country’s largest investment project throughout Africa. 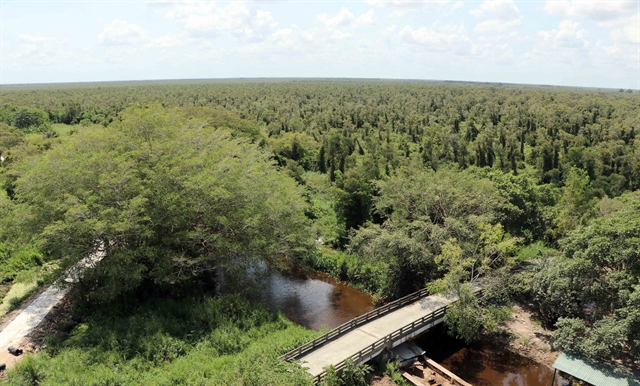 HCM CITY – Authorities in the Cửu Long (Mekong) Delta have stepped up measures to prevent forest fires as the region enters the peak dry season.

Earlier, at the beginning of the ongoing dry season, provinces took various measures to protect forests like dredging canals to store more water and mobilising human resources and facilities to monitor fires.

They undertook advocacy activities to raise public awareness of forest protection and prevention of fires.

In Cà Mau Provinice, the provincial People’s Committee is ordering relevant departments and agencies to have in place sufficient personnel and facilities to promptly discover fires and extinguish them.

The U Minh Hạ forests and those on islands usually face a high fire risk in the dry season, according to the province’s Forest Protection Sub-department.

Rangers are thus tightening checks to prevent the illegal entry of people to harvest honey and poach since their activities can cause forest fires.

Some 8,500ha of forests in the U Minh Hạ National Park face fire risk level 1.

Huỳnh Minh Nguyên, director of the park, said a part of the forests would face risk level 2 in the next two weeks.

After Tết (the Lunar New Year), which fell on February 12 this year, canals in the park have been dredged to store water for firefighting, he said.

“The national park has sufficient human resources to monitor forests to promptly cope with fires.”

In the 8,535ha U Minh Thượng National Park in Kiên Giang Province’s U Minh Thượng District, 1,115ha face a severe threat of fire.

Some 1.4 million cubic metres of water have been pumped into key areas and high ground for firefighting.

The park has cleared obstacles from 72km of canals and 25 roads in high-risk forests to improve access.

It has set up four groups with 6 – 10 people each to monitor high-risk areas around the clock.

It has strengthened advocacy activities to raise awareness among people living close to forests about protection and fire prevention.

Lư Xuân Hội, director of the reserve, said cameras have been installed in three watch towers for monitoring fires.

The reserve is working closely with other relevant agencies at the provincial and district levels to monitor forests. It has had no fires in the last 18 years.

In An Giang Province, mountainous districts like Tri Tôn and Thoại Sơn have taken measures to mitigate the risk of fires.

Tri Tôn has more than 8,400ha of forests of which, 4,406ha, including 2,550ha in mountainous areas, face a severe threat of fire, according to relevant authorities.

The district has stepped up propaganda about forest protection regulations and the monitoring of forests and the task of preventing fires.

The delta has 347,000ha of forests, mostly mangrove and cajuput. – VNS