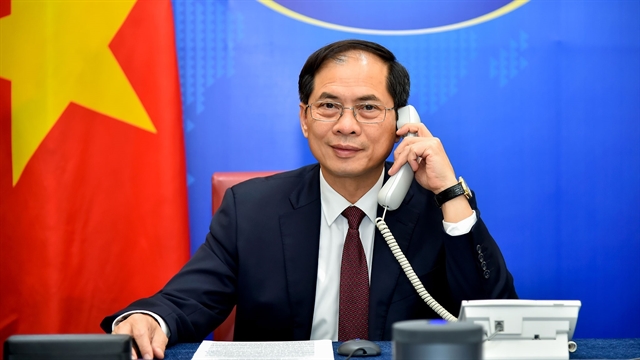 Speaking with the press recently, Sơn said Việt Nam will pursue a foreign policy of independence, self-reliance, peace, co-operation and development, multilateralisation and diversification of foreign relations, and integration into the world.

It stands ready to be a trustworthy friend and partner of foreign countries, he said, adding that it wishes to work with all countries on the basis of international law, equality and mutual benefits.

Expressing his pride in Việt Nam’s position and potential, he said the diplomatic sector will concretise guidelines for external relations set at the 13th National Party Congress and materialise its resolution in the new period.

Priority will be given to deepening ties between Việt Nam and all of its major partners, especially its neighbours, strategic and comprehensive partners, and traditional friends.

“Once we maintain good relations with those countries, the peaceful, stable, and co-operative environment will become more sustainable,” he said.

The focus will be placed on economic diplomacy, he said, stressing that international co-operation will help Việt Nam step up its integration and development and reach its targets.

Việt Nam’s position in the international arena has been elevated over the years and multilateral external activities enhanced, the minister said.

The country aims to play a more active role in multilateral forums and organisations by joining the process of setting the rules while raising initiatives to advance its position as a responsible member of the international community.

Its immediate task is to succeed in its role as UN Security Council’s Presidency in April and as a non-permanent member of the council throughout the year, he said, noting that the country should continue to join other activities of the UN, including peacekeeping missions.

The diplomatic sector will work with the ministries of National Defence and Public Security and other ministries and agencies to push ahead with Việt Nam’s engagement in not only the UN but also in other regional mechanisms such as ASEAN, APEC, the Asia-Europe Meeting (ASEM), and other regional organisations.

The work will continue to be a central task of the sector, he said.

The appointment of Sơn, who has worked in the diplomatic sector for more than 35 years, as Minister of Foreign Affairs was approved by the legislature on April 8. He is one of 14 new Government members for 2016-2021.—VNS

Easing monetary and fiscal policies in combination with institutional reforms are the way for Vietnam to ensure sustainable and rapid economic growth amid global uncertainties.

Breakthroughs in institutional reform along with easing monetary and fiscal policies would help Vietnam’s GDP growth to average 6.76% in the 2021-2023 period, with the growth rate this year of around 6.47%.

Head of the General Research Department under the Central Institute for Economic Management (CIEM) Nguyen Anh Duong revealed the first out of three growth scenarios set up by the agency in a conference under the Australia supports Vietnam’s economic reform program (Aus4Reform), discussing efforts to boost Vietnam’s economic growth in the post-Covid-19 pandemic on April 22.

“This is the best way for the country to ensure sustainable and rapid economic growth amid global uncertainties,” Duong noted.

In a second scenario when the government only focuses on easing monetary and fiscal policies, the economic growth would be 6.32% in 2021, slightly lower than that of the first scenario, and eventually reach the rate of 6.69% for the 2021-2023 period.

“However, inflation as a result of these policies would mean higher inflation, which is 3.78%,” Duong added.

For the least optimistic scenario with an assumption of minimizing intervention of fiscal and monetary policies, the CIEM forecast Vietnam to achieve a GDP growth of 5.98% for this year and around 6.35% for the next three-year period.

CIEM’s Director Tran Thi Hong Minh said while Vietnam is among the countries that have successfully reopened the economy on the back of effective Covid-19 containment, “it needs a long-term development plan to nurture driving forces for continuing reform.”

For this year, the CIEM’s expert suggested the necessity to maintain effective Covid-19 fight, address concern for businesses and people affected by the pandemic, and push for economic reforms.

In 2022, the government should combine economic recovery with institutional reform, and one year later, to gradually withdraw supporting policies for the economy and shift focus on reform.

Giving a more detailed proposal on economic reform, economist Le Dang Doanh told Hanoitimes that digital economy should be the priority for Vietnam in short-term.

“Institutional reform should go hand in hand with promoting digital economy, as e-government could minimize direct contacts and enhance transparency in the process of realizing administrative procedures,” Doanh noted.

“In a rapidly changing world, local enterprises without digital transformation would face difficulties in taking part in value chains of multinationals,” he suggested.

The Hanoi city government has requested its subordinate agencies to implement a range of measures to boost labor productivity.

A new foreign direct investment (FDI) attraction strategy for the 2021 – 2030 period is among a number of measures pushed forward by Hanoi’s authorities to boost productivity.

The municipal Department of Planning and Investment, the agency in charge of drafting this strategy, is tasked with cooperating with the Ministry of Planning and Investment in initiating the campaign “National productivity” and a national strategy for the development of information technology firms; encouraging private enterprises to expand operations to regional and global markets; working with the Hanoi Institute for Socio-Economic Development Studies in promoting a sharing economy model.

The Hanoi People’s Committee has directed the municipal Department of Industry and Trade to work with the Ministry of Industry and Trade in finalizing a legal framework for e-commerce; focusing on high-added value and sophisticated products; helping firms further integrate in global value chains, particularly those in the manufacturing and processing sector.

The Department of Industry and Trade would continue to contribute to the nationwide ongoing efforts to restructure the industry sector in the 2018 – 2020, with a vision to 2025.

The Department of Agriculture and Rural Development is responsible for setting up restructuring plans for the sector in the 2021 – 2025 period, with a vision to 2030, aiming to industrialize agricultural production, manufacturing and distribution processes.

The local government also asks the Department of Labor, Invalids and Social Affairs to improve efficiency during labor training, so that the workforce is equipped with required skills and capable of taking part in smart production using high technologies.

The Department of Education and Training is tasked with finalizing policies to ensure the development of private educational facilities in line with global trends, placing an emphasis on priority sectors with high impacts on Hanoi’s socio-economic development.

The Department of Information and Communication is urged to facilitate the progress of the proposal for “Establishing of Hanoi smart city until 2025, with vision to 2030” and Hanoi’s e-government.

The city considers digital transformation key to boost labor productivity and socio-economic development. To ensure the target is met, Hanoi expects the business community, government agencies and citizens to actively participart in the process.

The Department of Finance is requested to speed up the privatization and divestment processes at state-owned enterprises under the instruction of the government.

The State Bank of Vietnam – Hanoi branch must ensure provision of sufficient capital for production and business activities, especially those in priority fields.

Last but not least, local authorities at district, ward and commune levels are asked to continue accelerating administrative reform and  business environment improvement, a move considered essential to create favorable conditions for enterprises to expand operations.

With the local government’s tireless efforts to ease doing business, Hanoi attracted US7.5 billion in FDI commitments in 2018 and US$8.45 billion in 2019, taking the lead among localities in Vietnam. In the first four months this year, foreign investors registered to pour US982 million in the city.