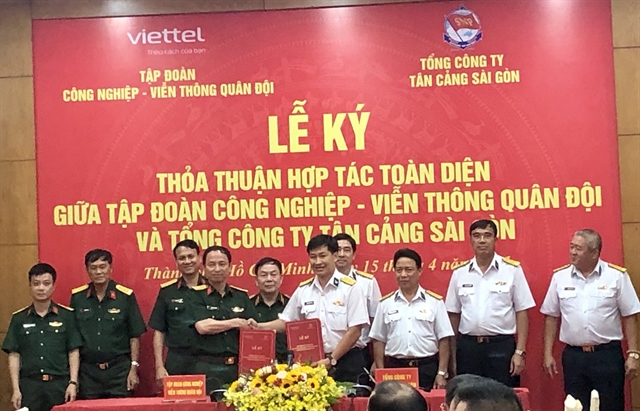 Saigon Newport Corporation and telecom company Viettel sign an agreement on Thursday (April 15) to promote the use of IT and develop logistics and other services. VNS Photo Thu Hằng

HCM CITY — The country’s largest container terminal operator, Saigon Newport Corporation, and military-owned telecom company Viettel on Thursday (April 15) signed an agreement to promote the use of IT and develop logistics and other services.

They will join hands to develop eco-system services for the port’s customers and partners.

They plan to speed up development of smart warehouses and logistics centres in key economic zones across the country.

Development of e-commerce infrastructure will also be a focus.

Speaking at the signing ceremony, Senior Captain Ngô Minh Thuấn, general director of the port, said with the “comprehensive co-operation” Saigon Newport would underscore its leading position in maritime and port services.

It accounts for nearly 50 per cent of container export-import market, and ranks among the top 20 containers terminal globally.

It is among the world’s 500 most valuable brands according to the UK-based Brand Finance and valued at US$6.016 billion, up 3.4 per cent from last year. —VNS

More than 87% of local businesses affected by COVID-19

According to the 2020 Provincial Competitiveness Index (PCI) survey, the COVID-19 pandemic has led to a widespread negative impact on the operations of local enterprises. More than 87% of them, including domestic private and foreign-invested firms, have reported that their operations last year were heavily impacted by the global pandemic.

The proportion of businesses reporting the impact of the pandemic as “completely negative” stood at 15% for domestic private enterprises and 13% for FDI firms, respectively. Only 2% of businesses, of which less than 1% are FDI enterprises, rated COVID-19 as having a “positive” effect, while approximately 11% of each group said they have suffered no impact from the pandemic.

Dau Anh Tuan, director of PCI Project and head of the Legal Department under the Vietnam Chamber of Commerce and Industry (VCCI), says that the narrowed domestic market coupled with disrupted supply chains represent the largest difficulties facing local businesses.

“COVID-19 has greatly affected business operations of various sectors from garments and textiles, tourism to aviation, and transportation which all endured a decline in revenue compared to the previous year. 30% of businesses said they had to lay off their employees. This is a very high rate, severely affecting enterprises’ operations,” Tuan states.

This comes as the turnover of numerous local firms in 2020 came in significantly lower due to travel limitations of consumers as they tried to either protect their health or comply with social distancing measures. Due to this, roughly 66% of domestic private firms and nearly 62% of FDI enterprises reported a fall in revenue last year. On average, business revenue dropped by about one thirds in comparison to 2019’s figures, he adds.

Business size over the next two years is forecast to decrease significantly in comparison to a figure of 51% recorded in 2019. This marks the third lowest level since 2006, when the PCI survey initially began on a national scale.

This figure is only higher than the bottom recorded in the 2012 to 2013 period when the Vietnamese economy faced the dual impact of the global financial crisis coupled with domestic macroeconomic instability.

“In the 2020 PCI survey, up to 13% of businesses plan to scale down their business operations or close down. This is the highest level in 15 years since the VCCI conducted PCI surveys in all provinces and cities nationwide,” the PCI Project director says.

Many local businesses have therefore devised solutions aimed at dealing with the pandemic as well as setting out long-term solutions, such as changing and diversifying supply sources to the market whilst boosting digital transformation.

Local authorities across all levels should therefore give priority to assisting businesses and citizens to overcome the negative impact of the pandemic in a fair and appropriate manner. In particular, it can be viewed as necessary to consider investing resources in retraining and providing skills for workers who have lost their jobs due to COVID-19.

This is due to many labourers currently looking for jobs in sectors capable of responding to the crisis in a more flexible way, the PCI Project director emphasizes.

The HCM City Department of Planning and Architecture has proposed a 1:2000 scale for zoning of three areas in the eastern part of the city.

The areas, which include Linh Trung and Truong Tho in Thu Duc District and Tam Da in District 9, are part of high-tech, innovative hub development zone.

Under the proposal, the Linh Trung area, which connects the city’s university village and High Tech Park, would have four land areas adjusted with a total area of 28ha.

Most of the areas are public land under the management of Agriculture-Forestry University and Saigon Water Co-operation (Sawaco).

The Linh Trung area will become the National University IT & EduTech Hub under the master plan for the area.

The Truong Tho area, the innovative hub for the area, would have three land plots adjusted with a total area of 8ha.

The three areas would have sustainable infrastructure adapted to climate change, transportation and technology.

In addition, 28ha of the Tam Da area would become the Tam Da eco tech hub in the future.

The proposals for adjustments to the master plan are in line with the plan of creating a smart hub in the eastern of the city.

The adjustments would also help the city call for investors and improve the city’s management capability.

Last year, the city launched a contest on the planning concept for the smart innovative area in the eastern of the city.

Sasaki proposed forming six innovation hotspots in the eastern part of the city with infrastructure for a hi-tech and smart urban development zone.

These six hotspots are located in districts 2, 9 and Thủ Đức.

The HCM City Department of Home Affairs has submitted a plan to the People’s Committee on the merger of these three districts and 19 wards in districts 3, 4, 5, 10 and Phu Nhuan to form the creative hub.

After the merger, the new hub is expected to spread over more than 211sq.km and be home to more than 1.1 million people. The eastern area is expected to become an innovation hub based on a digital, knowledge-based economy. — VNS