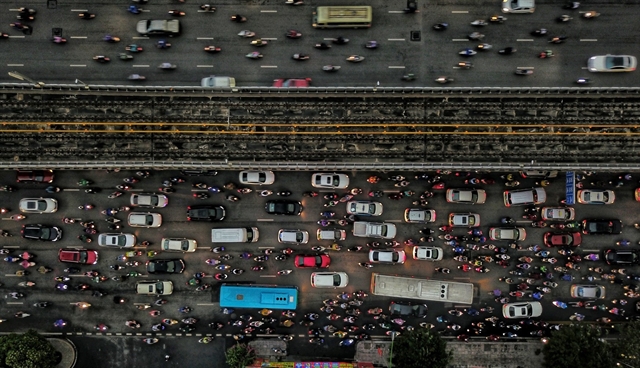 A traffic jam during rush hour in Thanh Xuân District in Hà Nội. Vehicle emission is one of Việt Nam’s biggest source of pollution. — VNA/VNS Photo

HÀ NỘI — The Steering Committee of the project ‘Support to Việt Nam for the Implementation of the Paris Agreement’ (VN-SIPA) held its second meeting in Hà Nội yesterday with the participation of representatives from ministries, sectors, and localities.

To speed up the project, he asked participants to make proposals and discuss the 2021 plan, especially activities relating to State management of climate change and enhancing Việt Nam’s role and responsibility as a signatory to the Paris Agreement and the UN Framework Convention on Climate Change (UNFCCC).

Weert Borner, Deputy Ambassador of Germany in Việt Nam, noted Việt Nam was one of the first countries to build an action plan to realise the Paris Agreement and one of the first to submit and update its NDC.

He said the VN-SIPA supports Việt Nam in creating the necessary conditions for the deal, to mitigate the impacts of climate change and bring environmental and socio-economic benefits for the country.

Phạm Văn Tấn, Vice Director of the Climate Change Administration at the Ministry of Natural Resources and Environment, said as COVID-19 is still a major issue, ministries and localities should prepare alternative measures and speed up the implementation of approved plans.

Kia Fariborz, Chief Advisor of the VN-SIPA project, said last year, Việt Nam completed and updated its NDC report in September, a move lauded by the international community as it was one of the first 20 countries to do so.

The four-year VN-SIPA project was approved by former Prime Minister Nguyễn Xuân Phúc on April 3, 2019, and has a total cost of 10.3 million euros (US$12.31 million), funded by non-refundable official development assistance (ODA) from Germany. It aims to strengthen the legal framework and national capacity in implementing the Paris Agreement, with the core conducting Việt Nam’s NDC.

So far, it has assisted in the building of a climate change programme in the revised Law on Environmental Protection 2020 as well as climate change management documents and sectoral plans for climate change response. It has defined solutions in the central provinces of Quảng Bình and Hà Tĩnh based on their local ecosystems. — VNS

The pandemic demonstrates that disasters are triggered by multidimensional risks and hazards, and that a country’s approach to urban resilience needs to be multifaceted.

Tropical Cyclone Harold in the Pacific reminds us of the impact of dual emergencies, such as cyclones and Covid-19, can cause. It was a category 5 cyclone with winds of up to 215 kilometers per hour. How do countries address emergency situations caused by natural hazards during a public health pandemic?

Across the Pacific, we have seen national governments taking action to deal with Covid-19, including social distancing, handwashing, and port of entry restrictions. They have taken proactive measures by restricting travel from a fast-growing list of affected countries; declaring states of emergency; requiring a 14-day quarantine and the completion of health declaration forms and/or medical checks on arrival; and banning the entry of cruise ships.

–   Expand the concept of disaster resilience: Development partners, like the Asian Development Bank, are in a position to provide immediate national budget support for disaster response and recovery through contingent disaster financing. By broadening the definition of ‘disaster resilience’ to include health emergencies, governments would be able to access such financing insurance schemes.

–  Use climate change financing to innovate: Climate change and disaster financing for risk management can help countries leverage their funds for research and/or innovative solutions on dual emergencies to help respond to the future spread of infectious diseases. For instance, the design of emergency shelters could be modified to provide a multipurpose function—a temporary living space that meets social distancing guidelines and includes enhanced health screening and triage.

–   Include dual emergencies into preparedness and operational plans: Utilities and municipalities ensure the continuity of basic services to communities during and after disasters. They have a role to play in preventing adverse impacts on people’s health and on the environment. In the Pacific, some wastewater utilities have emergency response plans; additional measures might be included to improve regular surveillance of wastewater influent. Researchers in the Netherlands, United States and Sweden have found that regular monitoring of wastewater could help detect new Covid-19 infections early.

–   Define ‘livable’ cities to focus on quality of life: At the heart of ‘livability’ lies the emphasis on quality of life and community well-being, supported by strong governance systems. A focus on the dual benefits of engineering systems and structures in city design—resilience and livability, is more likely to result in public spaces that connect and enable a smooth flow of people or buildings designed with greater air circulation. A sense of community, especially in times of disasters, is especially important. Digital infrastructure has supported a safety net through social media and chat groups. Anupma Jain is Senior Urban Development Specialist, Pacific Department, ADB.