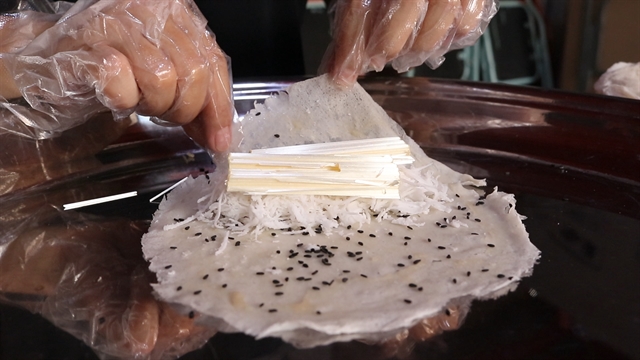 HCM CITY – Of all the snacks that have been enjoyed by Vietnamese students throughout the years, the sweet and creamy bò bía ngọt (sweet popiah) is one of the most popular.

The treat is based on the Chinese fresh spring roll dish called popiah, which explains the Vietnamese pronunciation of bò bía .

The candy is the dish’s defining ingredient, made by boiling white sugar with water, then using stretching and folding methods to mold it into small, hollow and brittle cylinders.

Nguyễn Thị Mai, who sells sweet popiah in a small shop in District 10, said that rolling the ingredients with flour paper must be done gently and slowly; otherwise, the brittle candy can break into tiny pieces.

Despite its cheap price and seemingly simple recipe, this dish can be very ‘addicting’. Its soft yet firm outer layer highlights its crunchy insides, and you can feel its sweetness slowly seep through the filling as you bite and chew the tasty treat.

“Thanks to the hollow cylinder shaped candies, sweet popiah is very crunchy inside but melts quickly in your mouth. The smell of fresh rice  paper and the creaminess of coconut also make it better,” she told Việt Nam News.

The sugar candy can melt easily under hot weather, so it has to be refrigerated. Shops like Mai’s can even ship individual ingredients separately for customers to make sweet popiah, which allows the candy to retain its shape longer. 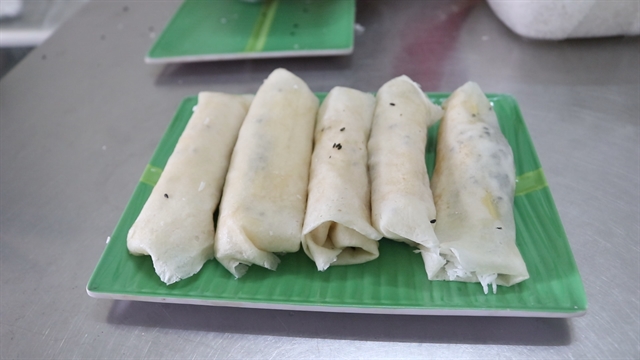 For decades, the snack has been enjoyed by students and adults who ate the sweet when they were young. – VNS Photo Việt Dũng

Popular with young and old

The sweet popiah’s flavour, combined with its cheap price and convenience, makes it a beloved snack of Vietnamese students and adults who used to eat it when they were young.

Lê Nhị Loan, who has been selling sweet popiah online for four years, said that she grew up eating the snack and wanted to sell it so that more young people could enjoy it.

“When we were young, we would buy sweet popiah from a vendor after school and eat them together. The snack was tasty and affordable. So many students loved having it as something to eat together and chat and relieve stress after school.”

Shops like Loan’s and Mai’s also ship sweet popiah ingredients overseas to Vietnamese living abroad who want to relive their childhood memories. They eat the snack with other Vietnamese or introduce it to their non-Vietnamese friends.

Nowadays, vendors selling sweet popiah are still easily found around crowded places and schools, selling the treat to students and locals who are never too old for some sweet, creamy goodness of their childhood. – VNS

With a history of 132 years backed by a series of iconic projects across Asia, Hong Kong Land is continuing to write its chronicle with luxury real estate projects in Vietnam, and The Marq certainly cannot go without mention.

More than 130 years ago, Sir Catchick Paul Chater, who was orphaned just before his ninth birthday, moved to Hong Kong to build a bullion and land trading business. Little did he know that he would become one of  Hong Kong’s most famous real estate tycoons. The young Sir Paul surveyed the Victoria Harbor by dropping a maritime plumbline to measure its depth and successfully persuaded the colonial government of Hong Kong to reclaim the land at the riverbank, marking his first step in the real estate business. In 1889, Sir Paul  formed a real estate company, The Hongkong Land Investment & Agency Company, Limited, together with Jardine, Matheson & Company’s Scottish businessman, James Johnstone Keswick, laying the first bricks to build the famous Hongkong Land empire of today.

The asset of long-standing history and heritage has traditionally been associated mostly with luxury maisons. Hongkong Land breaks the norm with its 132-year legacy expressed through creation of architectural masterpieces in major capitals of Asia.

Since its establishment in 1889, which instigated the famous Praya Reclamation Scheme that turned 65-acres of wasteland into Hong Kong’s leading commercial centre, Hongkong Land has grown to be one of Asia’s most familiar and trusted property investment, management, and development groups. Hongkong Land currently owns and manages more than 850,000 sq. m. of prime office and luxury retail property in key Asian cities, principally in Hong Kong, Singapore, Beijing and Jakarta.  The Group also has a number of high quality residential, commercial, and mixed-use projects under development in cities across Greater China and Southeast Asia. The addition of Singapore’s prosperity symbol, Marina Bay Financial Center, and Jakarta’s architectural marvel, World Trade Center, underscore Hongkong Land’s leading position in the region.

In the Vietnamese market, Hong Kong Land is one of the few pioneering brands in the field of investment and development of luxury real estate projects. In 1995, Hongkong Land first made its mark in the Vietnamese market with the Central Building project at 31 Hai Ba Trung, Hanoi. Three years later, a Grade-A office building at 63 Ly Thai To launched in a prime location of the country’s capital once again affirm Hongkong Land’s leading position in the market.

In Ho Chi Minh City, Hongkong Land marked its presence with the completion of  The Nassim – a luxury apartment project located at the much-coveted Thao Dien peninsula. For the first time in Vietnam, the private elevator concept was introduced via this project. A highly-sought privacy perk for wealthy residents, it was certainly a cherry  atop a series of other top-notch facilities.

The Marq, Hongkong Land’s latest luxury apartment project in the heart of District 1, is another interesting addition to Hongkong Land’s collection of luxury residential projects in Vietnam.

Situated along the dreamy street of Nguyen Dinh Chieu, a peaceful avenue hidden under a canopy of trees, where heritage is imbued with modern lifestyles, The Marq enhances its surroundings with its refined contemporary touches. Not just on the outer-eye candy, modern elements run inside out, from the soaring high ceilings to top-of-the-line appliances, private lift lobbies, and a wealth of recreational facilities crowning the rooftop. This masterpiece is dedicated to wealthy lifestyle connoisseurs seeking true value of life. As Hongkong Land’s latest gem, The Marq is set to be another trademark of Hongkong Land, staying true to its name (The Marq is combining the pronunciation of Mark – meaning imprint – and the letter Q – an abbreviation for Quintessence).

Both Hongkong Land and Jardine Matheson will certainly bring a lot of synergized value to their projects in Vietnam, including luxury real estate projects like The Marq.

The launch of The Marq’s new show unit and the release of a new selection of units for sale will be held in April 2021, right at the project site. Customers who register their interest will be granted 1 Starbuck voucher valued at 2,000,000 VND. In addition, all customers who successfully sign the sale or lease agreeement will be eligible to take part in a special lucky draw  and stand to win a BMW X7-xDrive40i-Pure Excellence valued at 6,889,000,000 VND. Don’t miss your chance with “New home, new luck” by The Marq.

Touchstone aims to be a leading early-stage VC investor in Vietnam’s fast-growing technology ecosystem. With a young population of nearly 98 million and with 75 per cent of people of a working age, Vietnam is uniquely poised to capitalise on a demographic and digital dividend in a post-COVID world.

The country is teeming with entrepreneurial energy, fuelled by a large base of local technical, engineering, and corporate resources, as well as a healthy surge of returnees after years of education and work abroad, eager to chart their own destinies and build the future of Vietnam. With more than $2 billion in startup funding in the past five years, Vietnam’s technology ecosystem is now at an important inflection point, with a large, growing, and internet-savvy middle-income population, a conducive environment for innovation and technology adoption, and stable government policy coming together at the right time.

The first steps of the entrepreneurial journey can often be the hardest and Touchstone is well-positioned to be the local go-to partner for founders in Vietnam.

The fund supports founders through local insights and access, coupled with a global network and reach that resonates with the founders’ needs and aspirations. Sectors of interest include fintech, real estate, healthcare, edtech, and technology that enhances efficiency in major Vietnamese value chains like manufacturing and agriculture.

Khanh Tran graduated from Nottingham University with a BEng and MSc degree in Electronic Communication and Computer Engineering. He was among the pioneering founders of VinaCapital Ventures and is a strategic advisor to Vingroup after stints at Goldman Sachs and Grab.

Tu Ngo, a Stanford alumna, is a well-respected serial entrepreneur in Vietnam’s startup community. Tu founded and built YOLA into a market leader in hybrid online and offline English training in Vietnam.

She also helped found ELSA, an edtech startup building an award-winning AI app that teaches pronunciation. Khanh and Tu met during their MBA programmes at INSEAD where they shared a common vision of leveraging their investment, operations, and founder experiences to back the next generation of founders in Vietnam.

“With Touchstone, we want to be a force for positive social development and to set high standards for venture investing in Vietnam,” said Khanh Tran, managing partner of Touchstone. “We will play a key role in supporting startups, prioritising long-term co-operation, fairness, transparency, and mutual respect. We’re grateful to be supported by a group of prestigious institutional investors and financial institutions such as Pavilion Capital and Vulcan Capital who believe in the potential of Vietnam and of Touchstone.”

Tu Ngo, general partner, added: “Having been a founder for more than 10 years, I understand how hard yet meaningful it is to turn ideas into reality. There are gaps in Vietnam that when addressed, we can help founders to go faster while focusing on the right things. Khanh and I have a bias for product-driven teams and we’re deeply passionate about supporting our founders to succeed. Touchstone is our way to show the world that scalable innovation and real impact can happen in Vietnam and can be built by our very own.”

The Touchstone team is rounded out by several key executives with vast experience in the local and international markets. Nam Le, principal, has previous experience at McKinsey, Morgan Stanley, Galaxy Studio, YOLA and Bobby Liu, director of EIR, was the founder of Hanoi incubator-led co-working space HubIT and Founders Institute Vietnam.

Every member of the Touchstone team not only possesses an in-depth understanding of the Vietnamese market and technology ecosystem but also brings a great amount of empathy and respect for founders and their teams. Touchstone is excited to unleash the next wave of Vietnamese technology startups and to help founders on their journey to build world-class companies that will serve Vietnam and beyond.