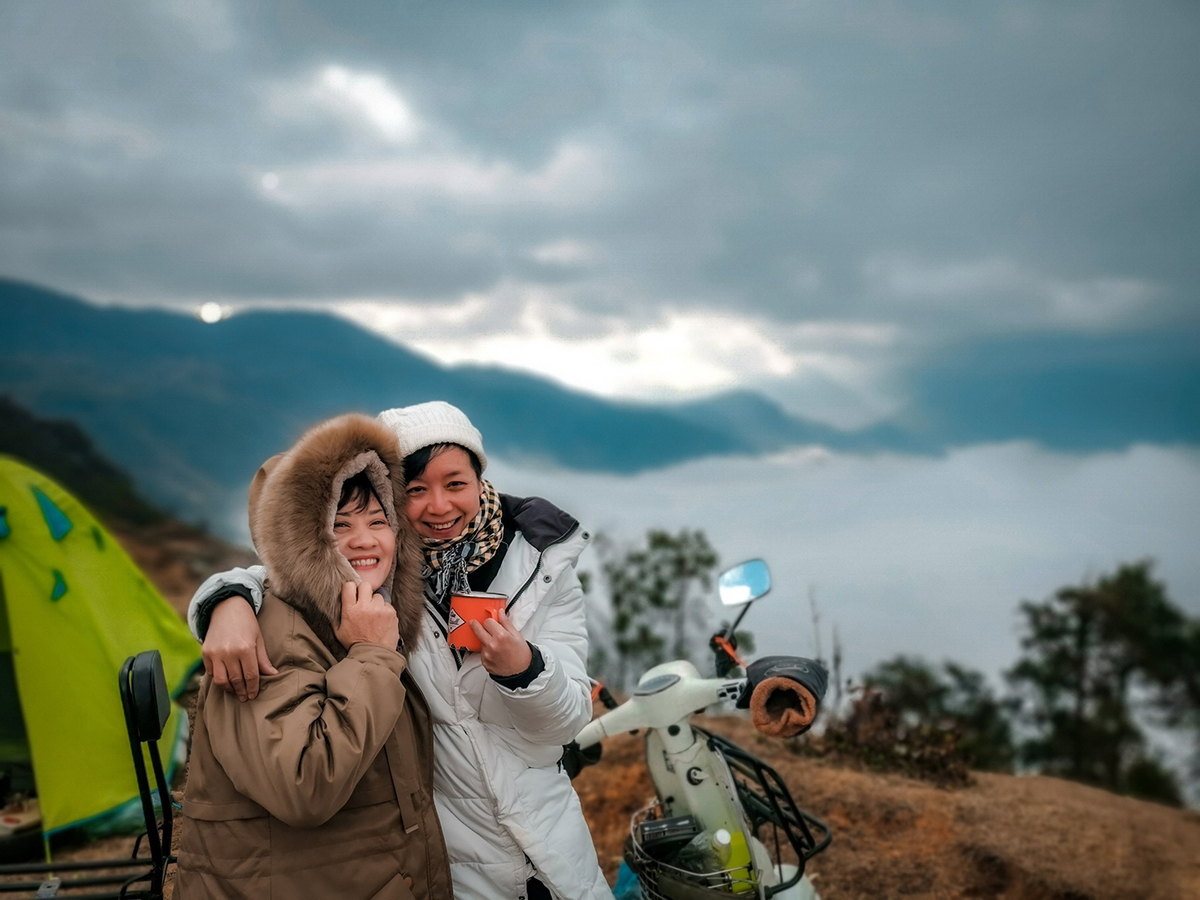 Y Ty is famed among Vietnamese trekkers for its beauty at cloud level. 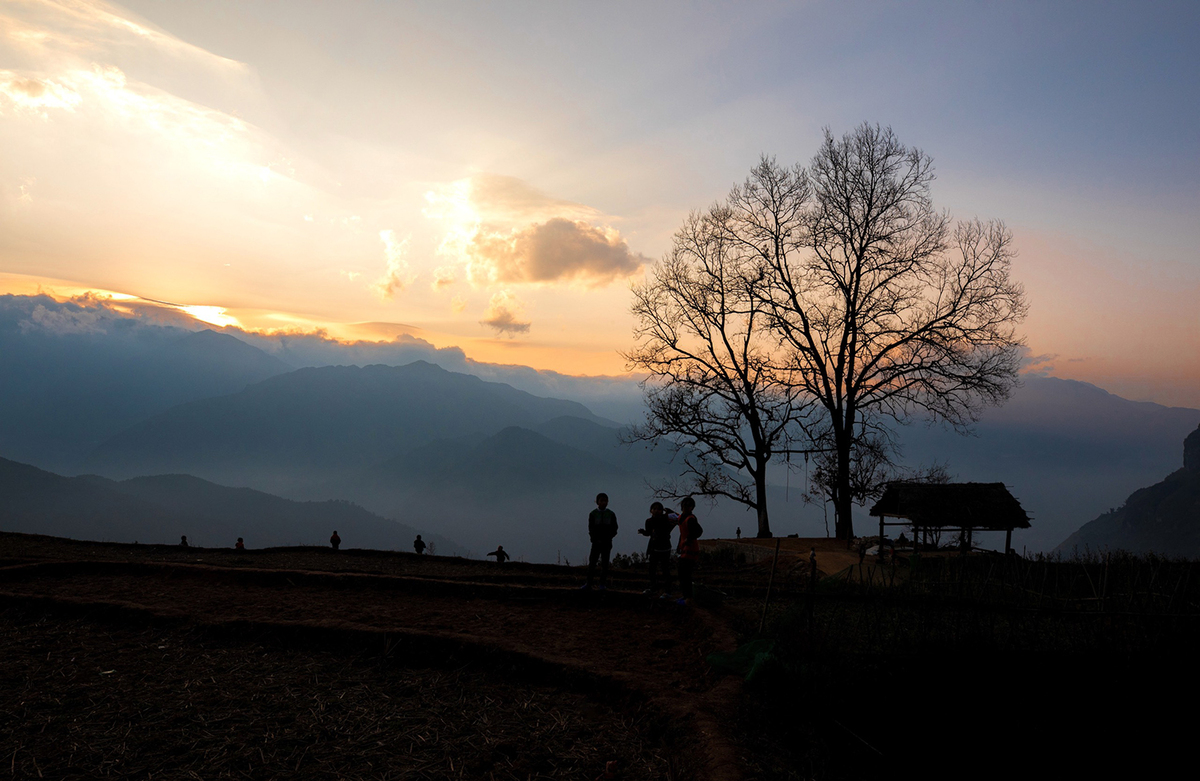 Located at an altitude of 2,000 meters above sea level, this is a cloud hunting destination for many nature lovers and photographers. 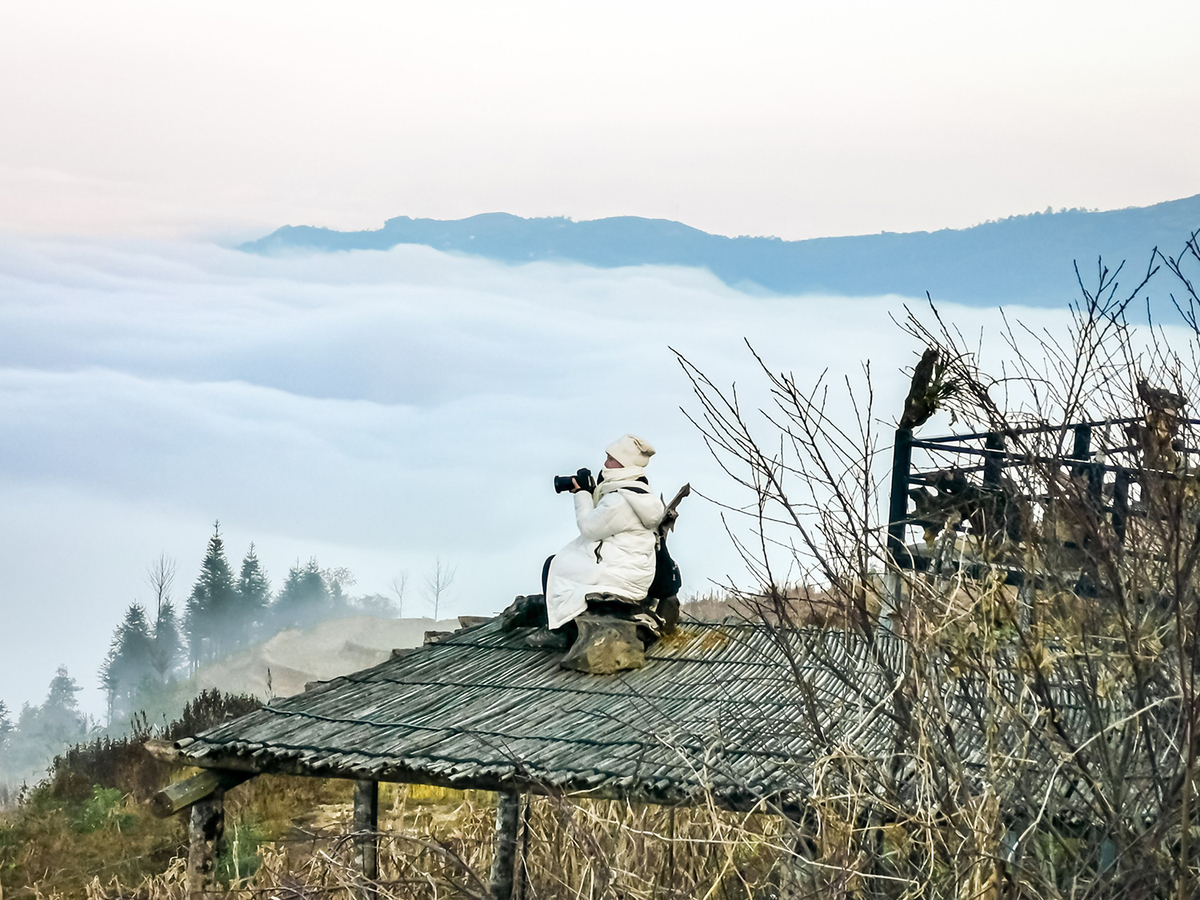 To tak e impressive photos, the actress chose a high angle to cover the scene below. Although a bit tired, Xuan said she fe lt happy and excited to admir e the natural beauty of Y Ty. 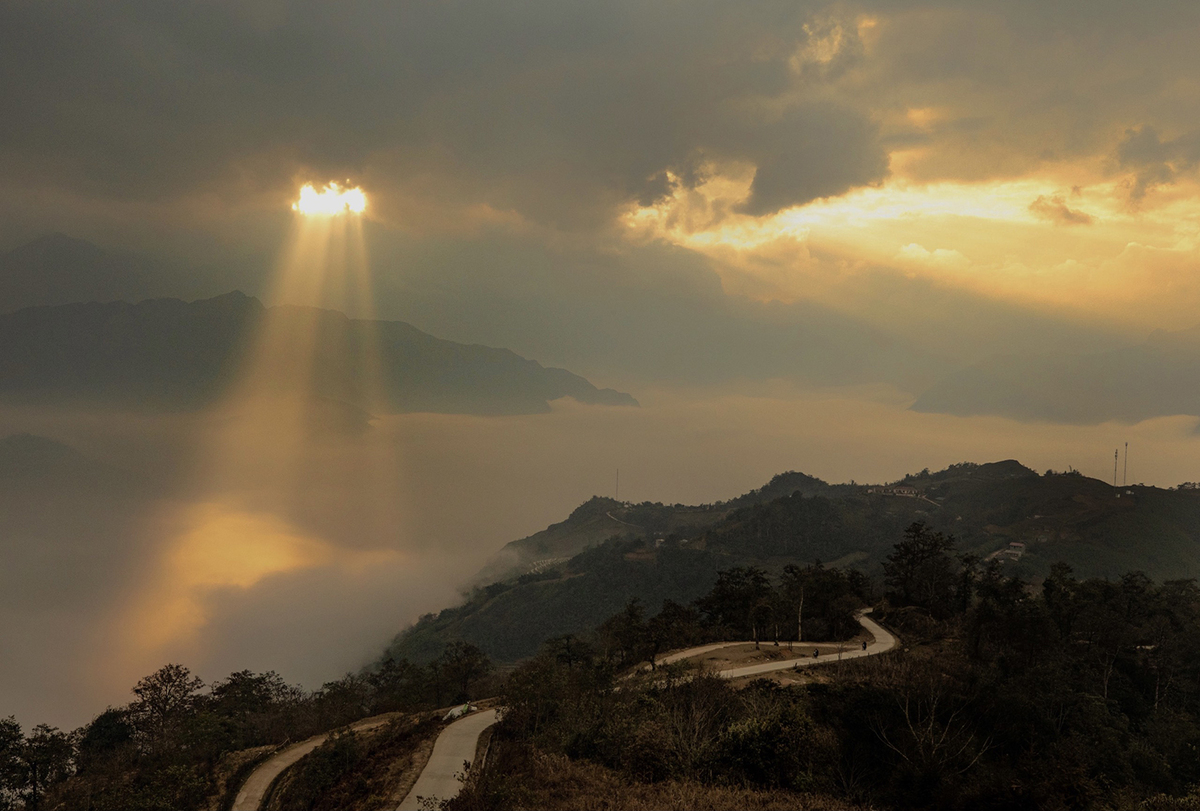 The weather during Tet was cloudy , with scattered sunshine and a verage temperature s of around 13 degrees Celsius , dropping to 3-5 degrees Celcius at night . 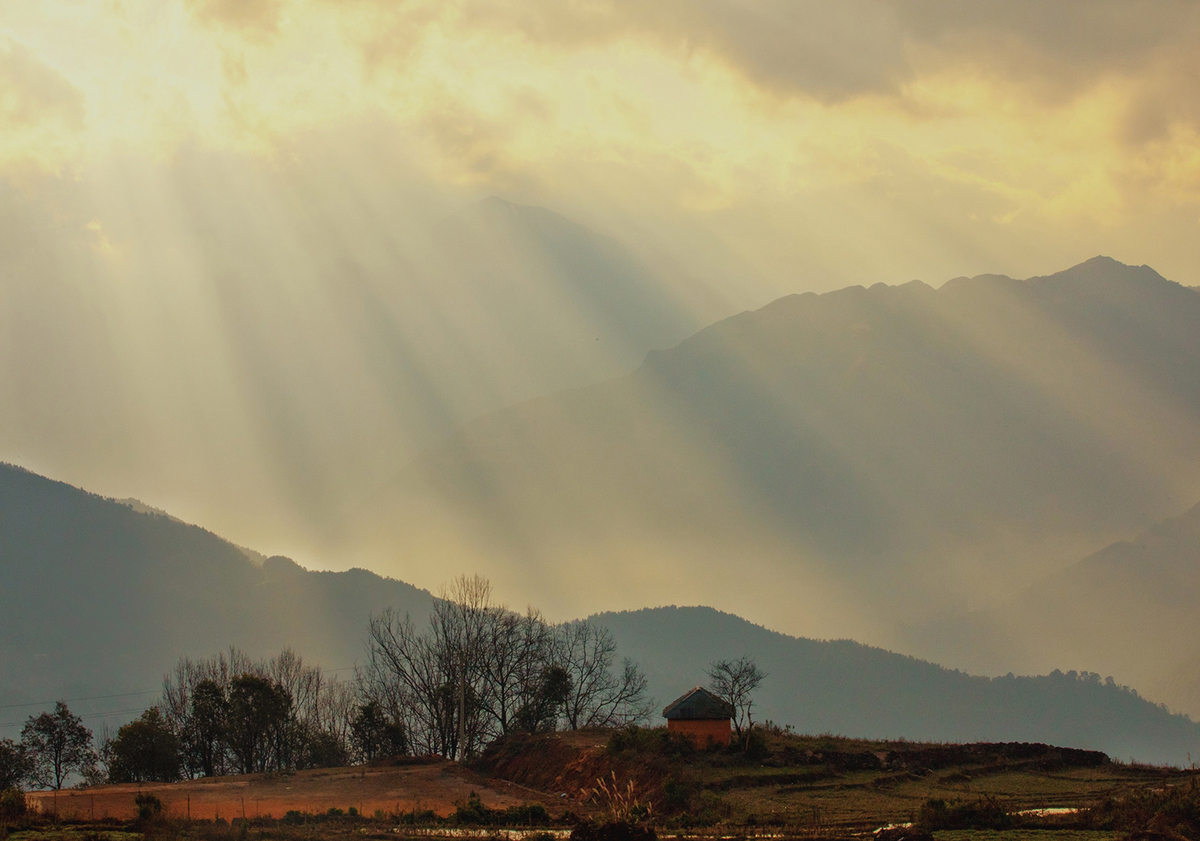 Xuan had to reach the Ngai Thau Thuong peak before the sun set to capture this moment.

“It was like a road to heaven. The sky and e arth were so close to my eyes , I had to stop and stare for a while before taking a photo,” she said. 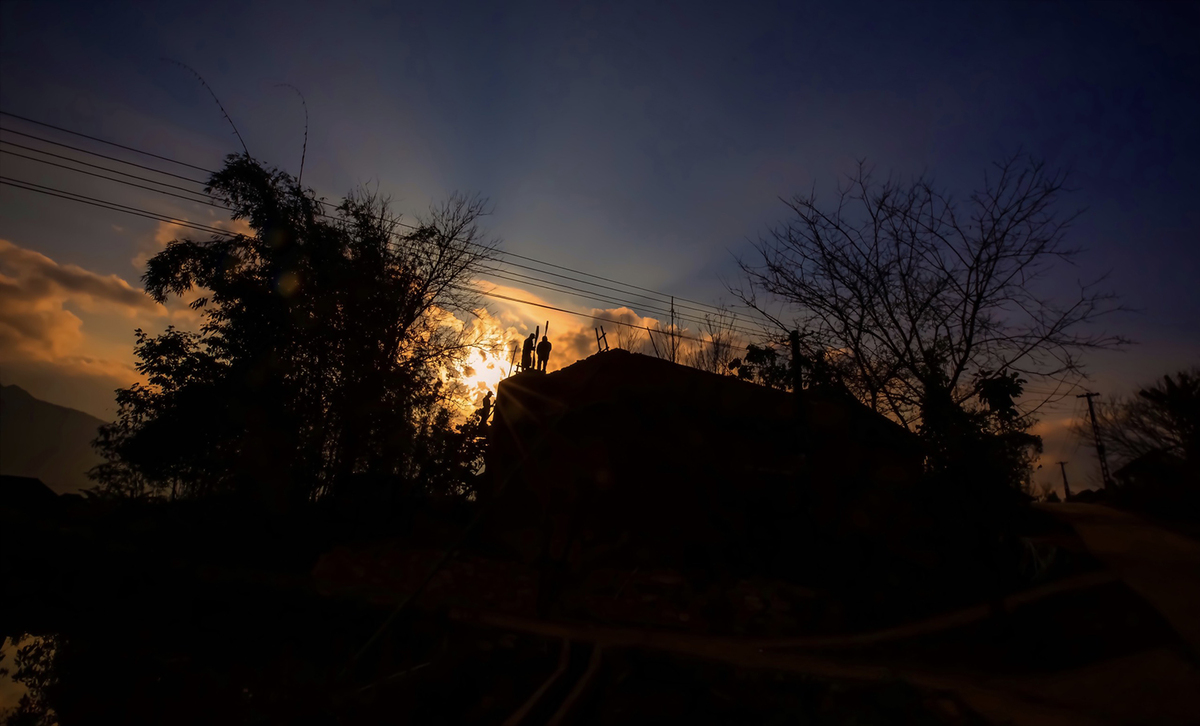 Members of the Ha Nhi ethnic community roof their homes in the dying light . 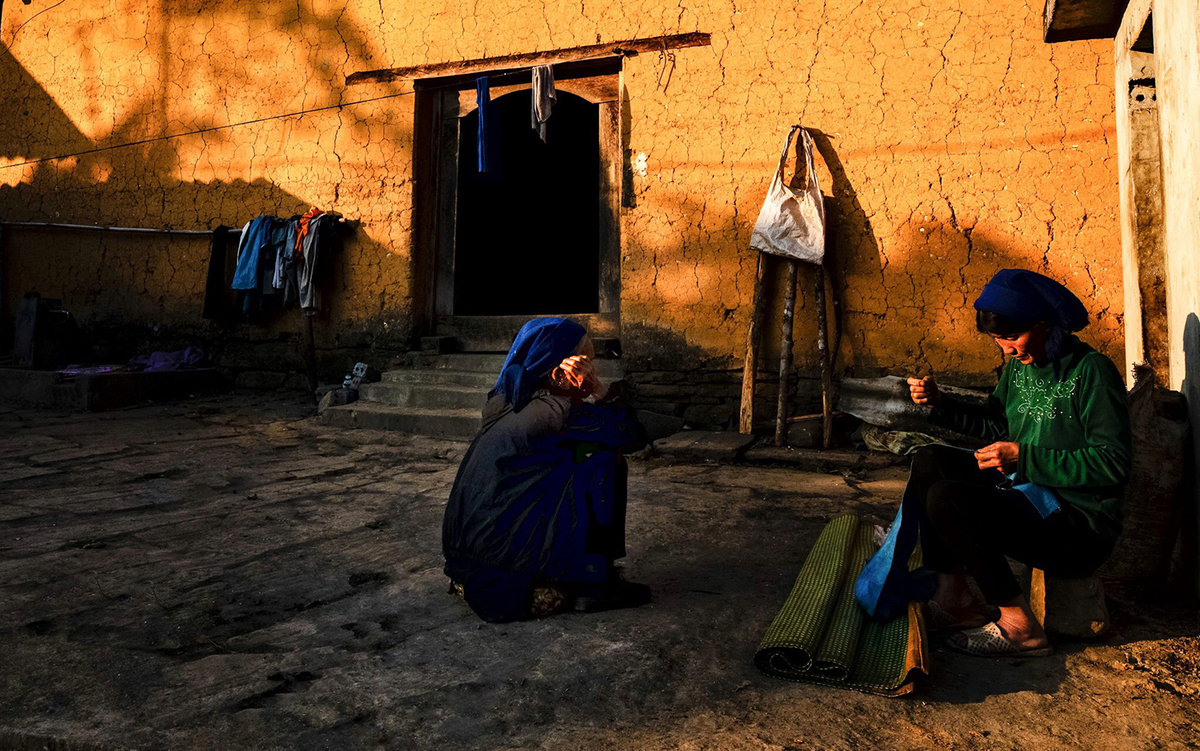 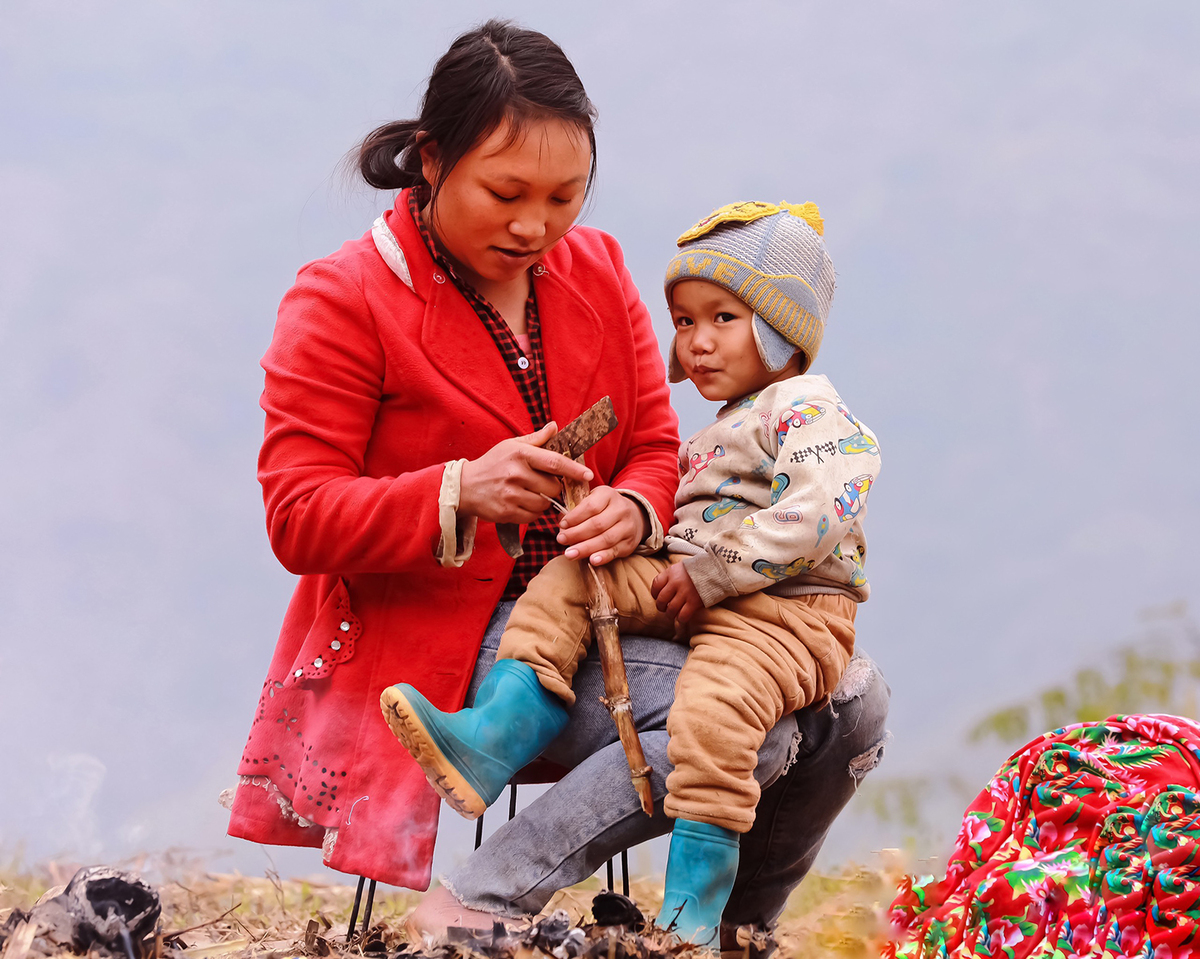 A Ha Nhi woman carves a stick to the amusement of her son . 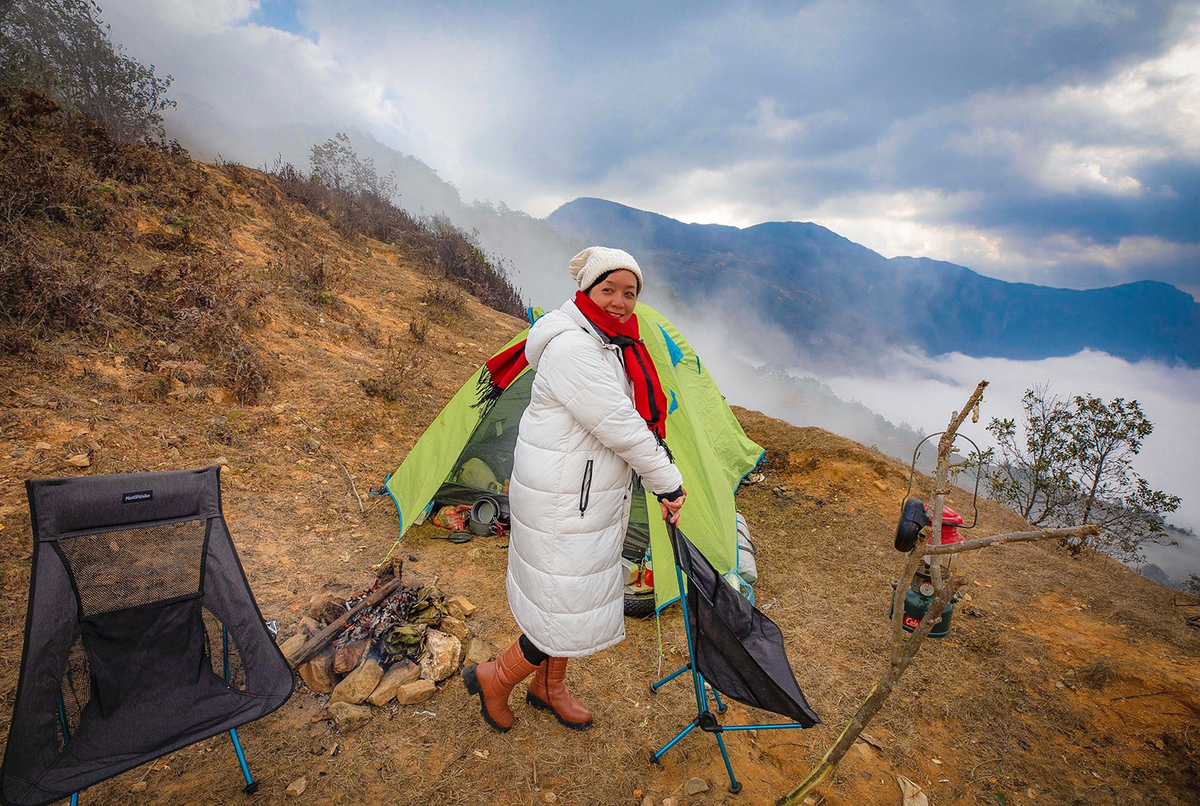 Adverse to the cold, Xuan suggested travelers wear white, red, or blue puffer jackets when taking photos to stand out against the wild backdrop . She also recommend ed using sneakers for easier mobility, instead of warm, but cumbersome boots .

Light snowfall appeared with a thickness of 5-10 cm by 10am this morning.

Snowfall in the area around Nhiu Co San Primary School.

Snow and ice cover the trees and grass.

Visitors lucky to admire the visage

Earlier on January 10, the area was covered in ice.

Y Ty is about 80km from Sa Pa. from O Quy Ho, visitors turn onto a path through Khoang hamlet and the forest to go to Y Ty.

Ice and snow cover the trees along both sides of the forest.

The rural market is still active to serve tourists in Y Ty. The local people burn firewood and gather together.

Visitors, who wish to admire the snow and ice, cannot ignore the peaks in the Y Ty forest whenever the strong cold winds arrive.

Many tourists are very excited.

A low temperature of below 0 degree can drain mobile phones of their power, so visitors should plug them into power banks constantly so as to not miss capturing beautiful moments.

The path from the peak to Y Ty commune.

The scene is very romantic.

The temperature is around 0 degrees and often below 0 degrees Celsius all day long.

The trees are almost frozen, creating a magnificent scene.

The highest point on Highway 158 from Sapa to Y Ty is covered with ice and snow.

Looking down the mountainside, the buildings are hidden in the mist.

Despite the dangerous road from Sapa to Y Ty, many visitors come to “hunt” the ice and snow.

The work, whose name translated into “Chem Village Festival”, is a 98×245 cm lacquer painting with five panels created in 1942, Drouot, the auction house, said.

It had been bought by a French surgeon who worked at the army hospital in the northern city of Hai Phong from 1928 to 1947. It was later kept by his family in Paris.

The Vietnam Fine Arts Museum in Hanoi has another version of the work with three panels while a third has only one panel.

Ty (1917 – 1992) graduated from the Indochina College of Fine Arts and was part of the generation of Vietnam’s great lacquer artists.

At the meeting, delegates heard a report delivered by Major General Dang Hong Trien, General Director of the Vietnam-Russia Tropical Center. They also discussed the implementation of a research program on ecology, natural resources, and deep-sea creatures. The results of this program are an important contribution to biodiversity conservation, and environmental improvement and protection.

In his closing speech, General Vinh hailed the center for their accomplishments and asked it to continue to work closely with other relevant defense agencies and military units to carry out the program in an effective and substantial manner.

Since the beginning of this year, the institute has actively carried out 92 scientific and technological projects and missions at Defense Ministry, Naval Service, and Institute levels. These projects focus on designing, creating, and manufacturing weapons and specialized equipment for the Navy to complete their missions.

Concluding the inspection visit, Nam applauded the institute for their achievements over the past time. He urged its Party Committee and Chain-of-command to continue to devise practical measures to build a regular and modern institute which deserves to be a leading scientific and technological research center of the Navy.

The Deputy Defense Minister also asked the institute to implement projects that meet the Navy’s mission requirements, contributing to the improvement of training, combat readiness, and exercises as well as the protection of national maritime sovereignty.

These items will be performed on October 2 at the National Cheo (Popular Opera) Theater.

The Dao are a major ethnic group with a population of 891,151 according to the 2019 census. They consist of several sub-groups and live mostly in the northern region. They have a diverse and rich culture and speak a number of different languages.

The pi le is played on special occasions such as weddings, Tet (Lunar New Year) and sacred rituals.

Their dress is adorned with a V-shaped scarf , four colorful patches from the hip and a white fabric sash around the wait. The undershirt is embroidered with silver star patterns and beads.

Lung Slang Village has 35 households, all of Dao ethnicity, who live in an isolated area on the far side of a mountain range with only one road for access.

“As a guest at Dao weddings, I notice the ceremony tradition is well maintained for many generations,” Tung said. “The bride and groom and the entire procession coming to fetch the bride look proud in their traditional costumes.”

Trieu Thuy Them of Dinh Lap District in her traditional dress.

In the past dresses used to be made of self-dyed fabric but since they are hard to wash, nowadays modern cloth is used instead. The solid black dress is embellished with hand-sewn beads in a fixed pattern.

In Ba Vi Commune, 98 percent of the population of around 2,000 are of Dao Quan Chet origin. “Their lifestyle is simple, but they generally have an optimistic view of life,” Tung said.

Nowadays though many young Dao people prefer to wear modern clothes in daily life, traditional costumes and customs are still treasured and preserved.

Dao Do in Yen Bai Province

The Red Dao wear the most flamboyant clothes of the four groups. In a palette of five colors from head to toe, red is predominant since they believe it represents happiness, strength and positive energy.

Hoang Su Phi District in Ha Giang is famed for its terraced rice fields, recognized as a national relic, and untouched lush green landscapes. It is also home to over 13,000 Dao people including the Red Dao, Dao Tien, Dao Ao Dai (Dao with long tunic), and Dao Quan Trang, who account for 22 percent of the district’s population.

The Red Dao here boast of a rich culture going back over 300 years. Most of them live in the southern parts of Hoang Su Phi District such as Ho Thau, Nam Ty and Thong Nguyen communes.

The Dao Cham people in Nam Dam Village have preserved many of their daily customs and traditions. The village recently started providing homestay services for visitors.

Unlike the Red Dao, their garments have a toned down palette comprised of indigo and white.

Their outfits are hand-spun and hand-embroidered. Their traditional techniques and hard-working nature ensure they have a steady livelihood from selling products such as dresses, tablecloth, headbands, and wall decorations.

The highlight of this costume is a long sash wrapped three or four times around the waist with a knot at the back.

A graceful Dao Thanh Phan woman with a dog in Binh Lieu District.

The traditional garments usually go with a box-like red hat held in place by a fabric string tied at the chin.

The motifs on their clothes represent images of ordinary things such as rakes used on farms, asparagus bean flowers and terraced rice fields.