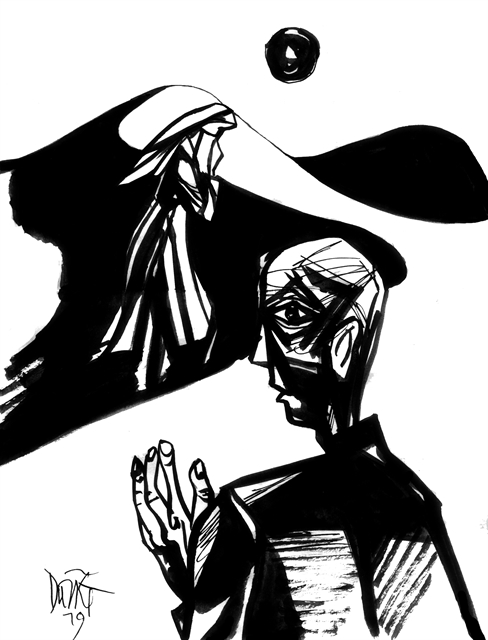 The revving engine of the Honda getting closer with every moment startled me awake. It was just part of an unforgettable dream, I think. Under the moonlight, I found I was lying in a small and shallow natural pond located in a desert. All around, it was perfectly quiet. I didn’t know how long I had been here, or how long I had dozed off. I moved my legs in the water and gently shook my head to wake up, and recalled what happened during the day.

I left Sài Gòn in the early morning, then I stopped somewhere in Ninh Thuận Province – not part of the plan. Yesterday, besides adding gas and oil, I had installed a row of fluorescent headlights on the roof of my 2003 Hyundai Galloper for those distant stretches of misty roads in my imagination. How could I have known the engine block would start smoking and give out in the middle of this sandy wasteland? If only I had not forgotten to cool it off with some water, I had regretfully thought to myself as I left the car on the roadside, strapped on my backpack and set off to find a café in the lingering heat of the sun’s final rays.

A broken moonlit night. I still harboured the vague fear I had had since I was small when I looked up at the low hanging black clouds revealing an eerie sliver of moon, moving quickly and as if they wanted to swoop down to the ground, swallow me up and fly away. And now, the clouds chaotically yet silently pursued one another from east to west like a herd of primitive beasts fleeing from some fearsome thing emerging on the distant horizon. A low-pressure tropical storm at sea? I asked myself.

The owner of the street side café who had taken me to stay at this empty house for the night hadn’t said anything about the pond just a dozen steps away, as if it had nothing to do with this place or with her. I had only discovered it while I was opening the window to bring the moonlight into the room.

I could tell the owner was a kind woman from the first moment I saw her. You could draw her figure with a compass; everything was round and full. Her face, eyes, and lips were even more so when she suddenly looked up and saw me come in. She grabbed the striped rag from her shoulder and wiped the thin layer of sand from a table and chair, then invited me to sit in an apologetic voice, “Sorry about that. Day and night, just sand and wind.”

I asked where the closest mechanic was before ordering dinner.

“My goodness, that’s a tough one! I rarely deal with these kinds of things; you see, there’s nothin’ but sand fields for miles, let alone a garage,” the owner said helplessly. Suddenly, she remembered, “Let me call into town and see if Nu can help.”

Right away, she went to the wooden counter in the corner, picked up the phone and dialed. The line rang faintly through the receiver, but no one answered. After two more tries, still nothing. She sighed, hung up, then suggested I eat something first. She’d call again later.

I thanked her, ordered a few dishes from the glass display case, then asked for a basin of water to rinse off.

From the back porch, amidst the refreshment brought by the cool water, I listened to the woman’s story as she set the table. I learned that Nu was her daughter, had gotten married to a man in town, been divorced for a year, and still lived out there by herself, refusing to come back and help her mother.

As if words weren’t enough, when I came back inside, she pointed to a hand-sized photo encased in a mirrored frame on the counter, “That’s Nu before she got married.”

I didn’t know how to sympathise with the woman, nor could I say what I was thinking, “She’s cute.” Finally, I comforted her the nicest way I knew how, “You must have looked just like her.”

“How could I even compare?” replied the woman with pride for her daughter. She then asked an unexpected question, “Nu is miserable and it’s all my fault. Do you know why?”

I shook my head.

“Because we live in this place, but I still let her study.”

As I ate, I ‘confessed’ to the very natural ‘interrogation’ of the owner, just like she herself had ‘made a statement’ about her family’s plight. She asked me what had brought me down this deserted road, more than twelve miles off the highway toward the sea, to make me wreck my car and eat dinner here?

Before I could answer, she added self-consciously that the food here probably wasn’t as good as the food by the highway, not to mention what I ate at home, which she didn’t dare to compare.

After a gulp of cold beer, I looked at the woman, sitting at the next table over with a fan in her plump hand, waving away flies so I could eat. I smiled, “At home, I cook for myself, and I’m nowhere near as good as you. Honestly, the food here is delicious, especially the boiled squash flower in shrimp sauce.”

And I was telling the truth. But as for why I had turned down this narrow road and over the sand dunes toward the empty sea, I just couldn’t explain – even trying would have been useless. When I left Sài Gòn, I had still not decided where I would stop first on the trip: Đà Lạt, Ban Mê Thuột, or continue straight through to the north? So when I crossed the desert landscape of Ninh Thuận, I made a right toward the sea down an unknown road. Layer upon layer of vast, monotonous waves of sand stretched out before me in the sad, late afternoon sun, as if it had been awaiting me for ages, and contained something much like me at that moment. I leaned over and turned up the pop music in my stereo, then floored the gas pedal, causing the car to lurch forward with a roar it had never before made, at least not since the day I’d brought it home from the junkyard. After a few minutes, it began spewing white smoke, then died. It didn’t take long to realise it was not the courageous roar I needed, but merely one of indignant pain.

The woman couldn’t contain a surprised and slightly pitying “oh” when she learned that I cooked my own food; in her eyes, a woman should be taking care of me. Our conversation ceased as four heavy duty transport trucks carrying heaps of white sand parked in front of the café and close to ten men in yellow workers helmets noisily entered – all of them regulars.

“Hey, is that your horse out there, ‘boss’?” called a fat man with a child-like face when he spotted me.

With a nod in reply, I quietly continued eating.

The food didn’t taste as good as before, and I secretly mourned the loss of the desert silence.

The owner quickly set their table while suggesting they “give ‘the boss’ a hand,” making the business of towing the car into town her personal mission.

No one objected, as if helping ‘the boss’ was a given, and they focused instead on finishing their frothy mugs of beer.

Suddenly, I felt a surge of energy from the desert shoot through my body, though it may just have just been the alcohol. I stood up, walked over to the workers’ long table, and sat down without being asked. I waved my arm in a circle as I called to the woman a little too loudly, “Another round of beers!”

Sitting behind a woman on a Honda was something I had never thought I’d do, though it was happening now. As we turned off the asphalt road onto the sand, the bike swerved back and forth. In a panic, I wrapped my arms around the kind woman and held tight. Her round belly shook with laughter because she was ticklish, and because she had scared the man from out of town. You had to have been born and raised here to handle a motorbike on the sand without wiping out.

“My husband died right after this house was built. That was ten years ago,” the woman suddenly spoke up.

Having grown accustomed to her habit of telling stories without beginning or end, I replied absently, “Oh, really?”

“Since the day Nu got married, I’ve practically lived at the café.”

“Every now and then, whenever Nu comes back, the house gets some use. And wouldn’t you know, she actually likes it here.” The woman continued talking, but I had lost myself in the mesmerising light merging the sky and ocean of sand. The sound of the Honda in the desert night was even lonelier than the woman’s own laments.

“You can stay here for the night.”

After lighting an oil lamp, preparing the bed, and mentioning a few things I needed to know about the empty house, the woman went back out to the yard where the Honda was still idling, giving off its light.

Then, in disbelief, I watched as the red dot of the tail light vanished in the distance.

The small lake suddenly shone bright all the way down to the bed, and the surrounding ocean of sand blazed up in gold. For a moment, the black clouds, all floating by at different heights and speeds, had opened up an empty space for the moon to show its brilliant face. I saw myself completely nude and weightless in the crystal-clear water amidst the desolation and was reminded of a trip to New York the previous year. I’d broken off from the group and flown down to Florida to see my ex-wife. She closed her shop and we went on a cruise across the Gulf of Mexico to the Yucatan Peninsula. There, the tour guides told us we could strip down when we swam in the ‘cenote.’ She had casually removed her clothes, then laid down beside me, whereas I had not, though she hadn’t encouraged me since she could tell I was more stressed than usual.

Curbing my unstable emotions, I had opened my guidebook and read. Turned out a ‘cenote’ was a ‘sacred bottomless spring’ formed countless years ago when the limestone bedrock collapsed, exposing the groundwater beneath. The Maya believed it was a passageway to Hell, but personally, I had no interest in revisiting my hell.

As I thought about going inside and getting some rest for tomorrow, I heard footsteps coming from the direction of the house. Startled, I turned around and recognised the girl from the photo earlier that evening. Now, I believed the revving engine of the Honda that had first awoken me may have been real. As she walked, Nu discarded her clothes one-by-one on the stone path leading down to the lake. Stunned for a moment, I suddenly realised it was too late to alert her to my presence.

Luckily, the clouds again wove together, shielding the resplendent image of the moon.

* An excerpt of the novel Trong Vô Tận (Inside Infinity), by Vĩnh Quyền