Five more people have tested positive for SARS-CoV-2 in Vietnam, raising the total number of patients in the country to 2,426, the Ministry of Health reported on Friday evening. 
According to the ministry’s report, four of the new patients are from Hai Duong Province.

The imported patient is a 24-year-old Vietnamese woman who illegally entered Vietnam at Hong Ngu District in the southern province of Dong Thap on February 23. She was detained and sent to a local quarantine area upon arrival and tested positive for SARS-CoV-2 on February 25.


The patient is now being treated at the Hong Ngu District General Hospital.

With these new infection cases, the number of Covid-19 patients in Vietnam has increased to 2,426, including 831 locally-transmitted cases reported since the new outbreak started in Hai Duong on January 28. Hai Duong Province alone has recorded 647 cases.

As of 6 pm on February 26, a total of 1,839 Covid-19 patients had recovered and been discharged from hospital. There have been 35 deaths, most of them being the elderly with serious underlying diseases.

At present, as many as 76,495 people who had close contact with Covid-19 patients or returned from virus-hit areas are being monitored at hospitals, quarantine facilities, and at home.

The new infections brought the total number of patients in the country to 2,426, including 831 domestically-transmitted cases since new outbreaks hit Vietnam on January 27, according to the National Steering Committee for COVID-19 Prevention and Control.

The Subcommittee for Treatment reported that 35 more patients were declared to recover from the disease on February 26, raising the total number of recoveries to 1,839.

Meanwhile, the number of deaths related to COVID-19 was still kept at 35.

As many as 76,495 people who had close contact with confirmed patients or entered Vietnam from pandemic-hit region are being quarantined nationwide, including 580 in hospitals, 12,038 in concentrated quarantine establishments and the remaining 63,877 at their residences./. VNA

A total of 74 volunteers were given the Vietnamese COVID-19 vaccine, Nano Covax, in phase II of human trials on Friday. 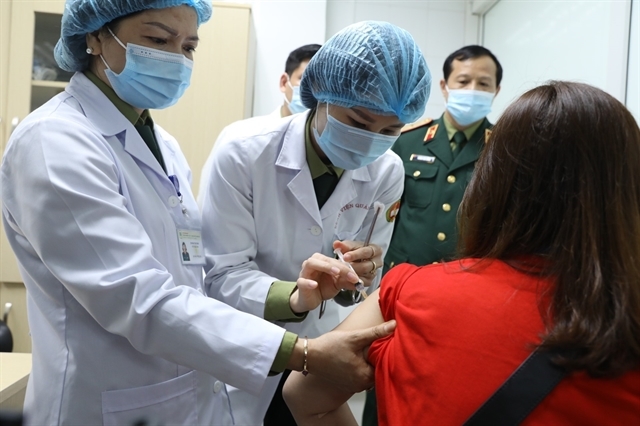 According to a representative from MMU, the phase 2 was held concurrently at two places, 35 were given the jabs at the MMU and Pasteur Institute in HCM City will administer the shots to 39 volunteers in the southern province of Long An.

The Phase 2 trial is expected to see the participation of up to 560 volunteers aged 18-60. Some of them have underlying health conditions such as hypertension and diabetes but are not too severe.

The trial of the vaccine at the two places, compared to the first phase where the vaccine is being administered in Hanoionly, could speed up the progress by shortening the study time to three months instead of six months while ensuring scientific data is accurate, the representative said.

The first 35 volunteers in Hanoiwere chosen among about 300 people who registered to participate in the second-stage trial of the vaccine at the MMU after undergoing rigorous medical examinations.

They are divided into four random groups to receive three doses of 25mcg, 50mcg and 75mcg of the vaccine or a placebo.

“Because the trial sees the participation of volunteers with underlying health conditions, we have been prepared for all scenarios and ensured safety for all volunteers,” said Lieutenant-General Do Quyet, Director of the Military Medical University.

He said the results of the trial would be announced in May before the third stage trial during which only one single shot of the vaccine is to be injected for 10,000-15,000 people from domestic and foreign pandemic-hit areas.

Test results of the first phase of the COVID-19 vaccine showed that it is safe and has no serious complications and might be effective against B117, the new variant in the United Kingdom, Quyet said.

He also said the research team would evaluate the immune response carefully in the second phase.

“Although we have shortened the trial of the vaccine by half with great efforts by the research units, more efforts should be made and the compliance with set standards is a must,” said Deputy Prime Minister Vu Duc Damas he visited the first 35 volunteers on Friday.

He stressed the need to have a COVID-19 vaccine produced by Vietnam as quickly as possible, adding that the successes of the trial would not only serve as effective against COVID-19 but also boost the pride of Vietnamese scientists who take part in the research and development of vaccines as well as of the public at large.

At the vaccine administration site in the southern province of Long An, a 57-year-old man from Thanh Phú Commune in the province’s Bến Lức District told Vietnam News: “After I heard about the second phase of human trials on the media, I went to the health centre to register as a volunteer.”

“I feel very happy to get the vaccine.”

Another volunteer, 51, from the same commune said: “I was provided careful counselling about the vaccine. I also read about the results of the first phase. I trust the vaccine’s effectiveness. I was happy to be selected.”

Nguyen Ngo Quang, deputy director of the Department of Science, Technology and Training, said: “Besides importing COVID-19 vaccines, the country also has to research and develop the vaccine to ensure health security.”

The imported vaccines are only meant for use now, and the country has to rely on domestic production in future, according to Quang. 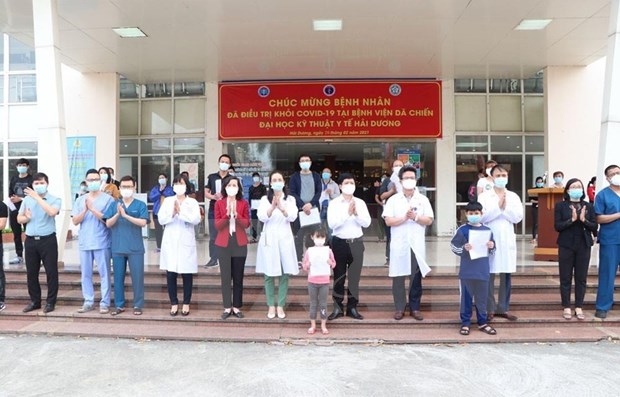 Hanoi, (VNA) – No COVID-19 case was detected over the past 12 hours to 6am February 27, according to the National Steering Committee for COVID-19 Prevention and Control.

The national tally is still 2,426, with 831 locally-infected cases found since January 27. COVID-19 patients have recovered, and the death toll remains at 35.

Among patients still under treatment, 45 have tested negative for SARS-CoV-2 once, 60 twice and 72 thrice.

More than 76,490 people are being quarantine across the country.

VNA
This morning, the Department of Education and Training sent its document to schools asking to enhance preventative measures against Covid-19 . Additionally, schools must ask teaching staffs, students, and students’ parents to fill health declaration forms in the first day of returning to schools.
A four days later, more than 1.7 million students citywide will return to schools after Tet holiday (the Lunar New Year) and a two-week break due to impact of Covid-19. Preschool Sen Hong in District 2 and Preschool Hanh Thong Tay in Go Vap District had asked parents to complete health declarations through websites.
Principal of Me Linh Primary School Nguyen Van Hung said that the school had disinfected classrooms as well as check students’ temperature while headmistress of Nguyen Binh Khiem Primary School in District 1 Do Ngoc Chi shared that students will be tested their body temperature and got disinfectant in the gate before entering the school.

The four domestic infections were detected in the now COVID-19 epicenter of northern Hai Duong Province, while the two imported cases were documented in the southern provinces of Tay Ninh and Dong Thap.

The same day, 35 patients were declared free of the virus, taking the total recoveries to 1,839.

Vietnam had gone nearly two months logging zero domestic cases before it detected the first one on January 27 and confirmed it one day later, according to the health ministry’s data.

A total of 831 community-based cases have been confirmed in 13 provinces and cities since then, making it the most serious wave to have struck Vietnam after the first-ever COVID-19 patient was announced in the country on January 23, 2020.

There have been 35 virus-related fatalities since January 23, 2020, according to the Ministry of Health’s data.

Nearly 76,500 people who had contact with infected patients or made an entry from virus-plagued places are being quarantined in the country.

The government is considering COVID-19 vaccine purchase as a foremost priority.

In its resolution issued Friday, the government expects to have 150 million doses of COVID-19 vaccines this year, according to the Vietnam Government Portal .

Front liners, including healthcare workers will be among the first vaccinated against COVID-19.