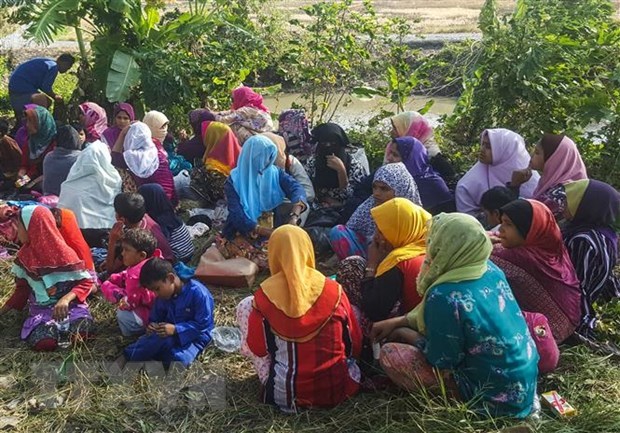 
Kuala Lumpur (VNA) – A Malaysian court has allowed a temporary stay of deportation of 1,200 Myanmar nationals who were scheduled to be sent back homeland on February 23, according to an insider.

The stay was granted until 10am on February 24, when the court will hear the groups’ application for judicial review to suspend the deportation, said New Sin Yew , a lawyer for Amnesty International and Asylum Access.

The 1,200 detainees, including asylum seekers and children, were scheduled to leave on February 23 afternoon in three navy ships sent by Myanmar’s military. The court issued the temporary halt due to current political tension in their homeland.

Myanmar nationals constitute the biggest population of emigrants in Malaysia./.

The V.League 1 season will return on either March 13 or March 19 before concluding on September 19.

The National Cup will also launch its qualifying round on April 23. With the tournament scheduled to end on September 30, this will allow the national U22 team plenty of time to prepare for qualifiers for the Asian Football Confederation (AFC) U23 Championship and the 31st Southeast Asian (SEA) Games. In addition, the senior team will be preparing for qualifiers for the 2022 World Cup in the Asian region and the ASEAN Football Federation (AFF) Cup.

The national team will therefore participate in a one-week training camp from May 22 to May 29 before going on to compete in the remaining qualifiers for the 2022 World Cup.

It is also possible that the Vietnamese team will hold an additional training camp between April 21 and May 7 due to a break in the V.League 1 season to allow Viettel FC to compete in the group stages of the AFC Champions League.

At present, Vietnam are currently leading Group G with 11 points, followed by Malaysia with nine points, Thailand with eight points, the United Arab Emirates (UAE) with six points, and Indonesia who are bottom with zero points.

The national team are scheduled to compete in three matches as part of the current qualifying process, with ties against Indonesia on June 7, Malaysia on June 11, and the UAE on June 15. 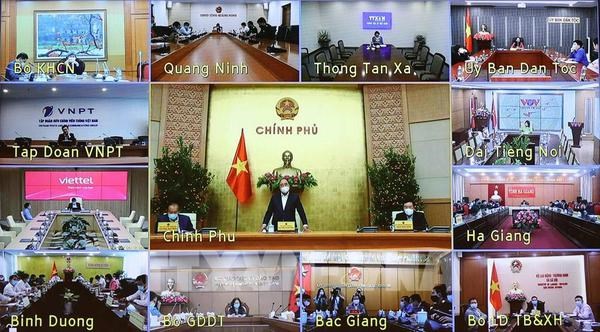 Hanoi (VNA) – Prime Minister Nguyen Xuan Phuc has instructed the quick vaccination for people as more than 100,000 doses of COVID-19 vaccine have arrived in Vietnam.

Chairing a Cabinet’s meeting with the National Steering Committee for COVID-19 Prevention and Control in Hanoi on February 24, the PM said Vietnam aims to provide COVID-19 vaccine shots to all people.
However, as the supply of vaccine cannot meet demand at the same time, priority should be given to certain groups in line with the Government’s resolution, he said, stressing the principle of high-risk groups and pandemic-affected areas coming first, followed by those with lower risks.
More vaccine will be imported in the future to serve domestic demands, the PM said while reminding people and authorities at all levels to continue with strict epidemic prevention measures.
He stressed the need to persist with the twin targets of controlling the pandemic and boosting economic development at the same time.
PM Phuc lauded the efforts of localities in controlling the pandemic.
Regarding the “rescue” of goods in Hai Phong, Quang Ninh and Hai Duong, the Government leader asked the Ministry of Industry and Trade to work with Ministry of Agriculture and Rural Development and Ministry of Health to design procedures to quickly sell agricultural products in pandemic-hit localities.
He also requested media agencies to strengthen communications on preventive measures against COVID-19../.
VNA 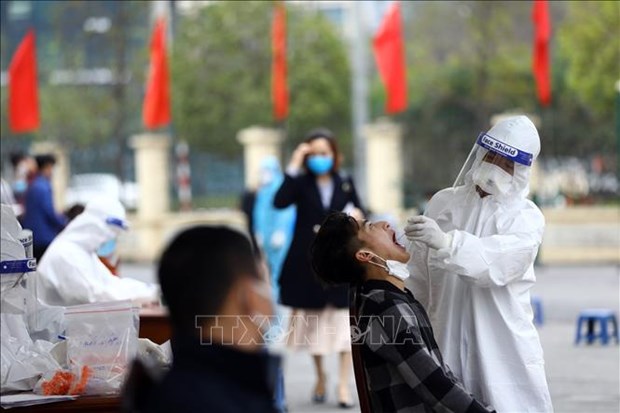 The new cases are in the northern province of Hai Duong , the country’s current largest hotspot. Both are close contacts (F1) of COVID-19 patients linked to the outbreak in POYUN Electronics Co., Ltd. in Chi Linh city who have been quarantined in centralised centres.

They are being treated at the COVID-19 Hospital No.1 in Chi Linh.

There have been 1,504 community infections so far, of which 811 have been reported in the COVID-19 resurgence since January 27.

Additional 43 COVID-19 patients have been given the all-clear, raising the total recoveries to 1,760. Death toll remains at 35.

Among patients still under treatment, 87 have tested negative for SARS-CoV-2, 39 twice and 60 thrice.

A total of 88,583 people who had close contact with COVID-19 patients or arrived from pandemic-hit areas are being quarantined across the country./. 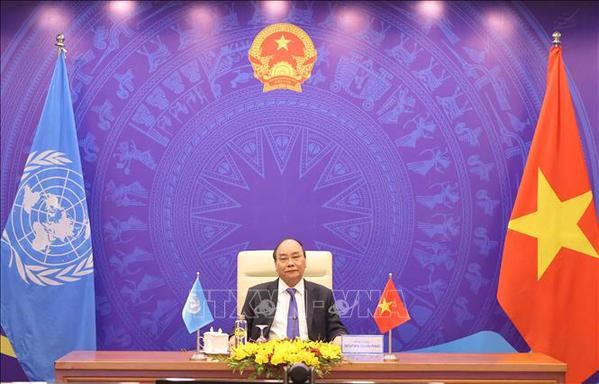 Hanoi (VNA) – Prime Minister Nguyen Xuan Phuc attended and delivered remarks at an open debate of the UN Security Council (UNSC) on addressing climate-related risks to international peace and security, which was held in the form of video conferencing on February 23.

Following is the full text of the Prime Minister’s remarks.

I applaud the initiative of the UK Government and yourself, Mr. President, to host this important UNSC open debate on “Addressing climate-related risks to international peace and security”. I would like to thank UN Secretary General António Guterres and Chair of the UN Youth Advisory Group Nisreen Elsaim for your insightful and substantive information and recommendations.
Mr. President,

Earth – our blue planet, and our shared home – is suffering from grievous impacts of climate change. 2020 was one of the three hottest years in modern history, and was faced with the constant and severe aftermaths of floods, droughts, bushfires, rising sea level, and the unprecedented COVID-19 outbreak.

Such calamities have placed great burdens on the political and socio-economic life of many countries. They have caused unemployment and poverty, affected the livelihood of hundreds of millions of people, and risked creating instabilities or exacerbating present conflicts in many countries and regions, thus threatening international peace and security. In addition, conflicts and instabilities would further erode countries’ resilience, and rob them of valuable resources that could have been utilised to overcome the challenges of climate change.

Therefore, I propose that the UNSC, with its foremost mission being the maintenance of international peace and security, needs to galvanize collective and persevering efforts of the international community via the following measures:

First, a comprehensive and balanced approach is necessary in handling the connections between traditional and non-traditional security challenges, particularly in addressing the root causes of conflicts, such as poverty, inequality, power politics and unilateral interference and coercion. Strict adherence to the UN Charter and international law must truly become a standard of behaviour for countries in international relations.

Second, for the 2030 Agenda for Sustainable Development (SDG-2030), the UN Framework Convention on Climate Change (UNFCCC), and the Paris Agreement (COP-21) to be effectively implemented, the UNSC and the international community should allocate greater resources to support developing countries, least developed countries, small island developing states, and land-locked countries that are most detrimentally affected by climate change, and are also lacking expertise and resources.

Third, I hope that the UNSC will continue to enhance its early warning capacity, and bolster its role in mediating, preventing and resolving conflicts in all regions, including through enhancing cooperation with regional organisations.

Fourth, in order to harmoniously manage the connection between climate change and security, it is necessary to continue upholding the principles of respect for the sovereignty, national ownership and principal responsibilities of states. The shared interests of communities and peoples, particularly vulnerable groups, must be placed at the heart of all national and global climate action strategies and plans.

According to the World Bank, Vietnam is among the six countries most severely affected by climate change. Thus, active and effective response to climate change is both a major guideline and a strong political resolve by the Vietnamese Government. Vietnam has made great efforts to fulfil its international commitments on climate change (SDG-2030 and COP-21). In this connection, we support all endeavours to address climate-related challenges at the UNSC and other multilateral forums. I hope that the international community will provide Vietnam with further assistance and resources, so that we can better fulfil our commitments. Vietnam will work closely with other ASEAN members and support the cooperation between ASEAN and the UN.

The world is burdened with the fight against COVID-19. Responding to the appeal of the UN Secretary General in “Making peace with nature is the defining task of the 21st century”, we should take bold actions and enhance international unity. I am confident that the “challenges” stemming from climate change can be transformed into “drivers” for change, contributing to fostering a future of peace and more sustainable development for next generations.

HCMC – Vietnam Airlines JSC has proposed Vietnam’s national health authority allow it to transport Covid-19 vaccines to the country, affirming that it has sufficient facilities and resources for the transportation.

A Vietnam Airlines representative today, February 24, said that the national flag carrier had prepared all the essential resources to meet the stringent requirements for transporting the vaccines by air, including logistics services, modern cold storage facilities, well-trained personnel and frozen product transportation procedures in line with international standards, especially ultra-cold containers to store the vaccines.

These are special conditions for the transportation of the vaccines, as they need to be stored at cold temperatures.

Apart from that, Vietnam Airlines has years of experience in transporting medical supplies such as medicines, operation equipment and organs for transplantation. The carrier had operated dozens of flights carrying organs such as hearts, livers and kidneys for transplantation under extremely strict storage conditions, tight time constraints and long distances of thousands of kilometers among localities across the country.

Such flights require tight cooperation between the relevant units and the health sector. Vietnam Airlines can meet this requirement thanks to its comprehensive transport system.

The carrier can also operate wide-body aircraft such as Airbus A350 and Boeing 787 to many global destinations to carry home the vaccines.

Further, the carrier has already set up a special unit ready for the transportation of the vaccine upon a request from the authorities.

Earlier, the Civil Aviation Authority of Vietnam had proposed the Ministry of Transport assign local airlines to conduct the transportation of Covid-19 vaccines to Vietnam.