Live music returned to the birthplace of The Beatles after a long coronavirus-enforced silence on Sunday when the English city of Liverpool hosted a one-off music festival to test whether such events spread the virus.

Around 5,000 people ditched face coverings and social distancing rules in the name of science and music. They attended the outdoor event having tested negative for COVID-19, and promised to get themselves tested again five days after the festival.

Their data will be used by the government’s Events Research Programme to help understand the effect of crowds on the spread of the virus.

But the scientific side of the event was far from the minds of revellers as they danced through the gates of Sefton Park.

“It just feels so good, so amazing – it’s been too long,” said 19-year-old student Meghan Butler.

Melvin Benn, Managing Director of Festival Republic, said he hoped his pilot project would play a key part in getting outdoor events back on the calendar this year.

“Once they get into the show they can party as though it’s 2019,” he said. “You can feel that the burden of the last 12 months, the last 15 months, has just been lifted a little.”

Getting to headline the event was an honour, said Blossoms lead singer Tom Ogden: “It’s been 413 days since we were last on stage … It’s been a long time and we’re delighted to be here.”

Lasting less than six hours and with a 10 p.m. curfew, the festival was a far cry from the multi-day hedonism of bigger events like Glastonbury, but those attending said there was nowhere else they’d rather be. 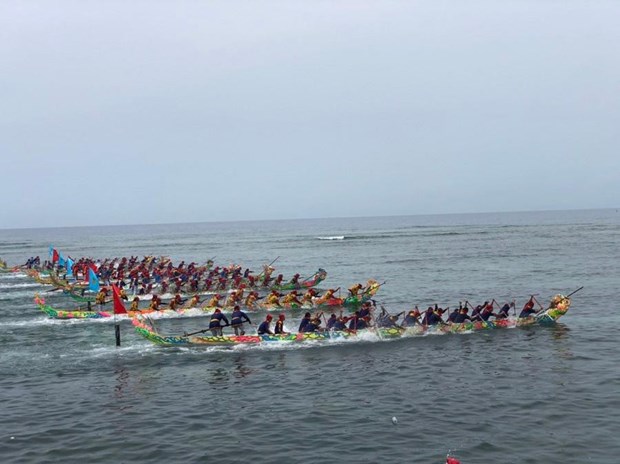 Quang Ngai (VNA) – The Tu Linh boat racing festival in the island district of Ly Son, the central province of Quang Ngai, has been recognised as part of the national intangible cultural heritage.

The certificate presentation ceremony was held on April 27 by the provincial Department of Culture, Sports and Tourism and the district People’s Committee.

It takes place around the Lunar New Year festival to pray for good weather, bumper crops, and peace. It is also meant to pay tribute to ancestors who explored this land, as well as the then Hoang Sa flotilla that planted sovereignty markers on Hoang Sa (Paracel) and Truong Sa (Spratly) archipelagoes and frequently .

To preserve and bring into play this festival, the Ly Son district People’s Committee conducted many surveys and studies over the past years to compile a dossier seeking the inclusion of this activity in the list of national intangible cultural heritage.

The Ministry of Culture, Sports and Tourism made the recognition in September 2020.

Thanks to this move, Ly Son district is currently home to two festivals named national intangible cultural heritages, with the other being “Le khao le the linh Hoang Sa” (Feast and Commemoration Festival for Hoang Sa Soldiers).

The Feast and Commemoration Festival for Hoang Sa Soldiers this year was held on April 19. 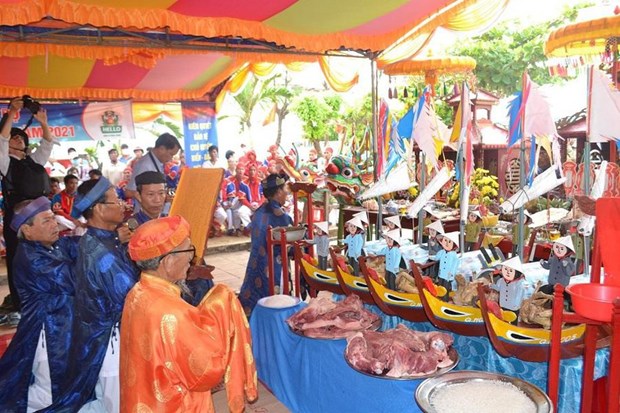 A ritual in the Feast and Commemoration Festival for Hoang Sa Soldiers (Photo: tienphong.vn)

According to Vietnam’s feudal state history, the Hoang Sa Flotilla was set up when the Nguyen Lords began their reign in the south of the country. Thousands of sailors overcame roaring waves and storms to survey sea routes, plant milestones and erect steles affirming national territory in Hoang Sa and Truong Sa archipelagos, and exploit marine resources ordered by Nguyen Lords. Their missions were full of dangers, and many of them never returned to land.

To pay tribute to the men enlisted in the flotilla, “Le khao le the linh Hoang Sa” has been observed through hundreds of years by families in Ly Son island and many coastal areas in Quang Ngai .

The festival, which is held every April on the island, was recognised as part of the national intangible cultural heritage by the State in 2016. It reflects Vietnam’s history of protecting the national sovereignty in the East Sea, especially over the Hoang Sa and Truong Sa archipelagos.

A monument and memorial house dedicated to the Hoang Sa Flotilla stand near the main road of the island./. /.

VNA
The Hue Traditional Craft Festival will be held for one month for the first time, from May 29 to June 26 in Hue city in the central province of Thua Thien-Hue. More than 40 art performances will be organised, gathering together a large number of artists, actors, and artisans.


The biennial festival is expected to dazzle participants with several new activities compared to previous editions.

It will feature a wide range of events, such as a craft design contest, the Hue Culinary Festival, a sculpting camp, an “ao dai” (Vietnam’s traditional dress) week, and a book exhibition.

The month-long festival will hold special activities on weekends to attract more visitors to the city.

Hai Phong, around two hours east of Hanoi, decided to suspend its annual Red Flamboyant Flower Festival 2021 which was scheduled to take place from May 11-13 to feature 66 cultural, tourism and sporting events and activities.

A tourism festival titled ‘Do Son-The Color of the Sea’, another significant event to boost local tourism, set to begin on Friday, was also canceled to avoid big gatherings.

Hoi An, a UNESCO heritage site in central Quang Nam Province, suspended all crowded events during the national holiday (April 30-May 3).

With this decision, two large-scale programs planned for April 30 (Liberation Day) and May 1 (Labor Day), including a music festival and beach tourism event were abolished.

Quang Nam authorities said after the holiday, they would collect random samples from tourist sites and crowded areas for Covid-19 testing.

Mekong Delta hub Can Tho suspended the launch of its pedestrian street in Ninh Kieu on May 1, while popular highlands resort town Da Lat closed its pedestrian zone on Hoa Binh Street.

Health authorities have warned of higher Covid-19 risks during the upcoming holiday as the outbreaks linked to new variants in neighboring countries like Cambodia, Laos and Thailand have intensified.

The Ministry of Culture, Sports and Tourism has decided to hold the first ever Vietnam International Photography Festival. The event comprises a competition to select a logo for the festival, an exhibition in Ninh Binh showcasing 250 photos of Vietnam through the lens of foreign photographers, and a host of symposiums.


The festival, part of activities during the 2021 National Tourism Year in Ninh Binh, is hoped to build brand for Vietnamese photography, thereby promoting the country’s image and enhancing international exchanges through photography.

Call for entries is scheduled for May and June, while photo selection in September. The award ceremony and exhibition will be held later this year.

Originally from Hanoi, 48-year-old Bich Hau has published nine short stories, in addition to a number of novels.

Her participation in the event comes following her recent release of an English-Italian bilingual poetry collection titled “Unknown”, which was released by Italy’s publishing house I Quaderni del Bardo.

Taking part in the European Poetry Festival 2020 offered Bich Hau the opportunity to produce a video in which to perform some of her poetry from “Unknown”.

The 10th version of the festival this year saw poets from 34 countries from around the world join the event, with participants coming from nations such as the Republic of Korea, Japan, Turkey, Macedonia, the United States, Canada, Colombia, Uruguay, and Switzerland.

Bich Hau was notable for being the only Vietnamese representative at the occasion.