The Hanoi city government should fast-track its proposal to turn some hotels into quarantine establishments to meet real demand as the overseas Vietnamese and foreigners continue coming to the city, Secretary of the Hanoi Party Committee Vuong Dinh Hue has stated.

According to Hue, while many people are willing to pay room charges for spending the mandatory quarantine at a hotel, relevant authorities have not discussed with accommodation establishments on paid isolation.

“The city authorities need to submit the idea of paid isolation in hotels to the National Steering Committee for Covid-19 Prevention and Control,” Hue said at a meeting with the Hanoi Party Committee of Businesses on March 24, recognizing that many hotels are at risk of bankruptcy due to a lack of guests.

Delegates at the meeting reported many industries are bearing the brunt of the pandemic, especially tourism and transportation.

According to Hanoi Tourism Corporation, most hotels in Hanoi are reporting a occupancy rate of only 10-15%.

Some tourism accommodations have registered to host people under paid quarantine, including one in Hoan Kiem District with 50 rooms and another in Ba Dinh District with 200 rooms.

Currently, the initiative is under consideration.

At a meeting of the National Standing Committee for Covid-19 Prevention and Control on the same day, Prime Minister Nguyen Xuan Phuc approved a proposal of mobilizing hotels and resorts across the country for mass quarantine.

In provinces/cities, the tourism accommodation facilities will give priority to hosting quarantined foreigners holding diplomatic and official passports and experts working for important projects in Vietnam.

However, Major General Nguyen Quoc Duyet, chief of the Hanoi Capital High Command said Vietnamese people suspected of contracting the coronavirus should not undergo mass isolation at hospitality facilities, except for holders of official and diplomatic passports and experts.

Currently, Hanoi has 15 isolation centers including nine at military barracks, one in Hanoi Police Hospital and five other areas for 14,000 people.

According to the General Department of Tourism, as of March 22, up to 145 hotels across the country have signed up to host quarantined people.

The Hanoitimes – Hanoi districts’ authorities are required to keep raising people’s awareness of the pandemic.

Hanoi’s districts need to strictly supervise people under quarantine at home as an indispensable measure to curb the spread of the Covid-19 pandemic, Kinh Te & Do Thi quoted Ngo Thi Thanh Hang, member of the Party Central Committee and Permanent Deputy Secretary of the municipal Party’s Committee, as saying.

At a recent meeting with Phu Xuyen and Thanh Tri districts’ authorities, Hang recognized that the two districts have been seriously and actively implementing guidelines on Covid-19 epidemic prevention and control.

Emphasizing that this work should be followed on, Hang requested the districts’ authorities to remain calm and ensure safety for people.

Besides, the districts’ authorities were asked to keep raising people’s awareness of the pandemic, so that people could take measures to keep themselves safe from the coronavirus.

She stressed that the districts strive for the double goal, Covid-19 pandemic prevention and socio-economic development, to ensure social security.

The districts also need to pay attention to supporting poor families and lonely elderly people to cope with the epidemic, ensuring that in the fight against the Covid-19 pandemic “no one is left behind”.

As of March 26, Hanoi has 52 active coronavirus-infected cases, the largest number in Vietnam. The majority are Vietnamese nationals returning from Europe and the US, in addition to foreigners from epidemic-hit regions. 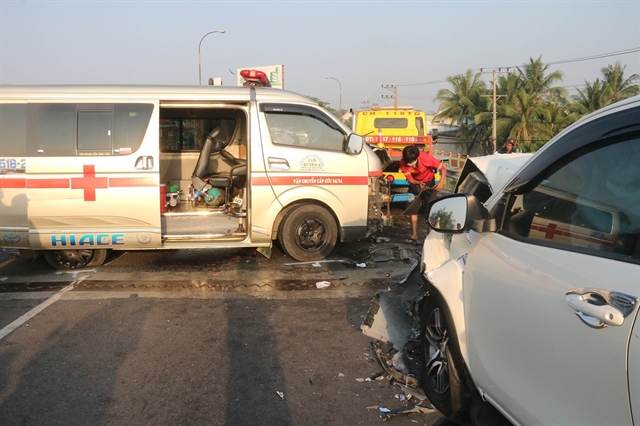 Khuất Việt Hùng, Vice President of the National Committee on Traffic Safety, talks to the Voice of Việt Nam about the number of traffic accidents in Việt Nam

What are the main factors leading to a reduction in traffic accidents in the country in 2020?

According to statistics from the Ministry of Public Security, the traffic accident rate in the five-year period from 2016-2020 compared to the previous five years has seen a 43 per cent drop in accidents, a 19.01 per cent reduction in fatalities and the injured rate also dropped by 53.91 per cent.

Last year was the first year that our national Law on Preventing and Combating the Harmful Effects of Liquor and Beer and the Decree No.100/2019/ND-CP came into effect calling on all drivers not to drink and drive.

Because of the COVID-19 pandemic, transportation nationwide dropped considerably, yet the police forces still applied many measures to ensure traffic safety.

The Ministry of Transport has regularly instructed the Directorate for Roads of Việt Nam and concerned agencies nationwide have applied many specific measures to fight back against the COVID-19 while calling on all road users to practise traffic safety. As a result, in the last 10 years, traffic accidents nationwide reduced by 17.66 per cent while the injured cases reduced by 20.7 per cent and the fatality rate by 12.2 per cent (the fatality rate dropped to under 7,000 people).

What measures have the Ministry of Transport and the National Steering Committee on Traffic Safety adopted?

From 2016, all Vietnamese agencies nationwide have strictly implemented Instruction No.18 of the Party Secretariat and the Resolution 88 of the Government on road traffic safety, railways, waterways and other means of transport.

In addition, Việt Nam’s traffic infrastructure has been improved and expanded. Non-stop toll-fee stations were erected nationwide while a mass communication campaign was launched to encourage all motorbike riders wear helmets. As a result,80 per cent of motor riders wear helmets compared to 38 per cent rate in 2017.

Has the Government Decree 100 helped cut down the country’s traffic accidents significantly?

In 2019, the Law on Preventing and Combating the Harmful Effects of Liquor and Beer was promulgated and came into force on January 2020 and the Decree 100 giving sanctions on people who are drinking and driving.

The Decree 100 is a spotlight action of the Government in its current tenure.

Last year, the Public Security forces, particularly the transport police, played a pivotal role in putting the Government’s Decree 100 into life and since then the Decree has become a driving force for people nationwide to abide by traffic laws – a key factor in the reduction of traffic accidents.

How do you respond to a report saying that some statistics about the traffic safety is not really reliable?

Under the country’s Statistic Law, the Ministry of Public Security is the agency that will gather all information on transport accidents and make it available to the public. The National Steering Committee on Traffic Safety will then use the information from the Ministry of Public Security to write their reports and make those available to the public as well.

Adding to that the number of traffic fatalities made public by the Vietnamese Government and the WHO is somehow slightly different. The main factor is that the definition of road fatality in Việt Nam is slightly different from that of the WHO. Under the Vietnamese Law, only people who are killed at the scene of the accidents are considered as accident fatality. Meanwhile, the WHO calculated the accident fatality case within 30 days from the day the accident happened.

It is reported that the Ministry of Public Security will soon make public a new regulation on road traffic accident calculation to make in line with the international law and practice. VNS