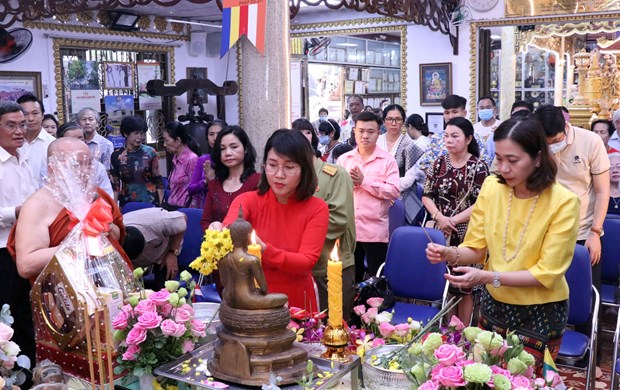 Participants in the ceremony bathe the Buddha statue, a ritual of the traditional New Year festival of Cambodia, Laos, Myanmar, and Thailand (Photo: VNA)

HCM City (VNA) – A ceremony was held at Pho Minh Pagoda in Ho Chi Minh City on April 14 to celebrate the traditional New Year of Cambodia , Laos, Myanmar, and Thailand.

Organised by the HCM City Union of Friendship Organisations (HUFO) and the city’s committee of the Vietnam Buddhist Sangha (VBS), the ceremony saw the presence of representatives from the consulates-general of the four countries in HCM City, the municipal Vietnam Fatherland Front Committee, the municipal Committee for Overseas Vietnamese, and the countries’ entrepreneurs and students.

The traditional New Year festival is known as Chol Chnam Thmay in Cambodia, Bunpimay in Laos, Thingyan in Myanmar , and Songkran in Thailand.

She noted that Vietnam, Cambodia, Laos, Myanmar, and Thailand are ASEAN members and have cooperated and assisted one another over many years. Their peoples have stood side-by-side in fighting for national independence, developing their countries, and building an ASEAN Community of peace, stability, cooperation, and prosperous development. 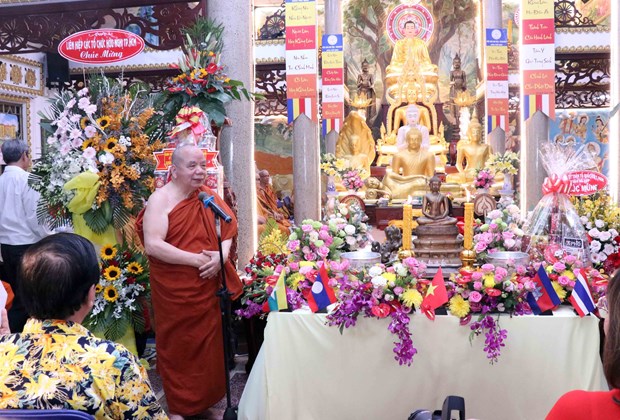 Most Venerable Thich Thien Tam, Vice President of the Executive Council of the Central VBS Committee and deputy head of the HCM City VBS Committee’s executive board, said the traditional New Year of Cambodia, Laos , Myanmar, and Thailand reflects the similarities in culture and religious practices among the countries, adding that it is helpful in strengthening the five nations’ solidarity in their development efforts and in ASEAN Community building.

Echoing that view, Ratiwan Bonprakhong, Chief Representative of the Tourism Authority of Thailand’s HCM City Office, held that the ceremony helps bring the five countries’ people closer together and also demonstrates their solidarity and unity./. 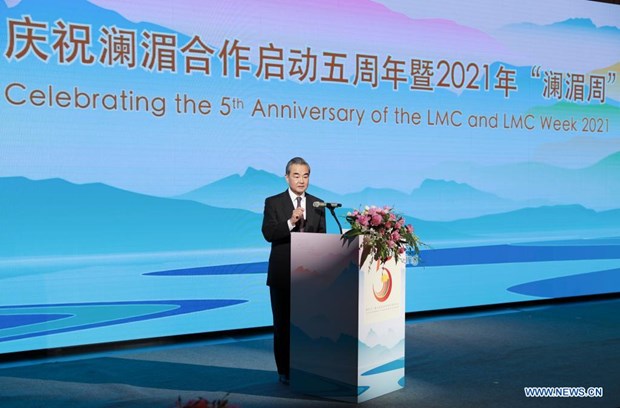 Hanoi (VNA) – China will work with Mekong countries to continue to promote the development of the Lancang-Mekong Cooperation (LMC) towards creating a new model of regional cooperation, and building a new highland of development and prosperity, Chinese State Councillor and Foreign Minister Wang Yi was quoted as saying on April 13 by Xinhua News Agency.

Xinhua News Agency also quoted the Chinese official as saying that the LMC mechanism had brought tangible benefits to the people of all LMC countries.

The six LMC countries absorbed resources from all sides, focused on pragmatic cooperation and reached fruitful results. They also did a lot to benefit the people and carried out regional governance and maintained peace and stability of the region.

Wang said that China is speeding up efforts to foster a new development paradigm, and the LMC is facing new opportunities.

Xinhua also quoted Myo Thant Pe, Myanmar Ambassador to China, as saying that all countries would continue to cooperate closely with China, push forward mechanism construction and deepen pragmatic cooperation to better benefit all the people./.